The Wrath of Kahn's


I’ll come right out and say that Kahn’s makes two things well: wieners and baseball cards. But behind their wieners is a spongy mass of card-collecting tragedy.

Kahn’s is a Reds-obsessed meat company based in Cincinnati. Billed as “The Weiner the World Awaited,” Kahn’s probably made a few of the hot dogs your grandparents/parents/you may have eaten in ballparks in the 50’s and 60’s. It seems they also made a number of baseball cards in that time. That’s right – this Ohio meat company was making baseball cards at the same time as a little company called Topps was getting its start.

Fast-forward to the card boom of the 90’s and Kahn’s is still manufacturing cards in the form of Reds team sets. Of course, these only start to matter to yours truly in 2000 when Griffey joined the roster. Every year from 2000 to 2007, Junior has a Kahn’s card.

These are not your everyday oddballs, either. The stat box on these is the most complete I’ve seen anywhere. 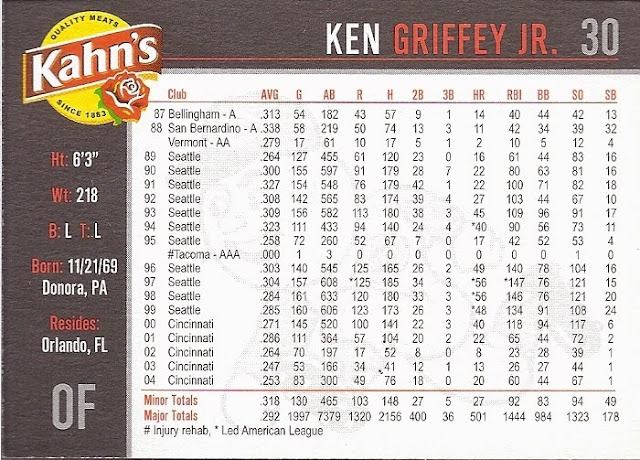 Complete major league stats including 1-game AAA stats when he was coming back from injury. This card back is an absolute workhorse.

So, yeah - I love Kahn’s cards. And here comes the tragedy I referenced earlier:

I only have one. One stinkin’ card out of seven.

My sole Kahn’s specimen was sent to me in March of 2013 by Jason of The Writer’s Journey. Had he not sent me this one I would never know that these kings of oddballs even exist. I’ve been chasing them ever since to no avail.

While this is an excellent model of how great a branded oddball can be, there are a few qualities of Kahn’s cards that can drive a collector like me insane:

Regionality – Cincy natives get exclusive access.
Their team set nature prevents one-card sellers – I can’t just hop on eBay and snag the Griffey for a couple of bucks. I have to bid on the whole team set.
Team sets are given out at Reds games – You can’t just buy them; you must go get them.
No online database – Luckily there is a compendium of online information that seems to have been put together by fans.

For the hardcore Griffeynauts of the world, there are two years of Junior/Senior overlap when Dad got a coach card in 2000 and 2001 (He also got a few player cards from before Jr. moved to Cincy). Here is a complete list of Junior’s Kahn’s cards:

I continue to only have the 2005 card with very few prospects for more; and that, my friends, is the Wrath of Kahn's.