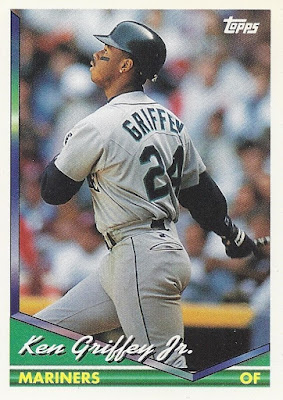 1994 is the year the whole cardscape changed. After the previous year’s array of new printing techniques and entire brands built around said techniques, ’94 is when we saw those techniques applied even to regular base cards. My adolescent friends and I liked the change, but vintage fans had to watch in horror as set after set began coming out of packs beset in glossy, full-bleed, heavily befoiled modernity that could hardly be described as cardboard anymore (and most of it wasn’t). When Old Man Topps jumped on the trolley, everyone knew this was less a fad than a sea change in the industry. 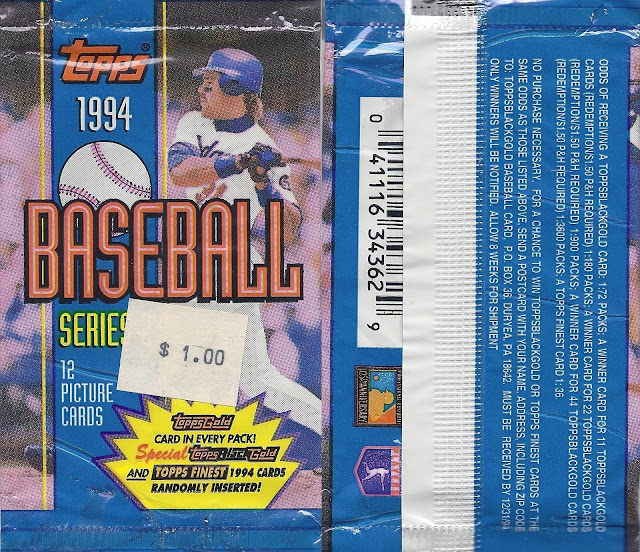 Cue 1994 Topps, the first in a series of all-gloss Topps base sets that continues unbroken to this day. It’s more than just glossy – the design is more colorful and intricate than ever before. The print quality of the base card photos is the best they’d ever had (it even holds up to early Stadium Club which, if you remember, had a Kodak logo on the box), and the content of the photos themselves is as good as the collector favorite ’91 set.

Despite ’94 Topps’ overall likeability, it has some minor issues. The cursive font in the nameplate feels a little dated. I can live with that, but I have a lot of difficulty dealing with the color palette. Despite being grounded in the green of the nameplate below, the palette tends to jump between attractive, team-appropriate color fades and seemingly random colors with no point of reference in the photo. There are Yankees cards with red borders, A’s with blue borders, and Cardinals with green and yellow. I hate to admit it, but it reminds me a lot of ’92 Fleer in that way. That’s super mean because ’92 Fleer sucks. Still, the good outweighs the bad here by a huge margin.

Last month I got a whole box of this stuff for a measly sawbuck, and while I’ve decided to build sets based on box breaks in the past, it became obvious early in this break that that was not going to be the case. The cards all stuck together from age with less than half being serviceable specimens for a decent set build. Still, there were a few great moments in this break I’d like you to see.

I got a nice selection of base cards and subsets out of that box, but when it comes to inserts, I only got one: 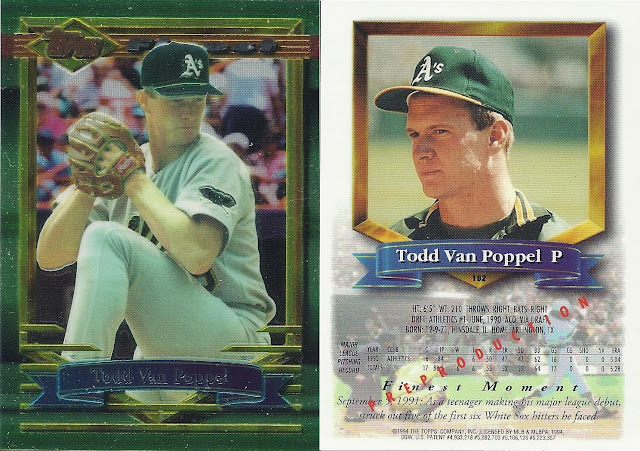 Imagine my surprise – a ’94 Finest card in a pack of ’94 Topps flagship. Turns out this isn’t so rare after all. A set of these special preview cards were randomly inserted at 1:36 packs. I’d like to have pulled a different player, but I was excited all the same. This is for trade, btw.

Let's go to the Griffeys: 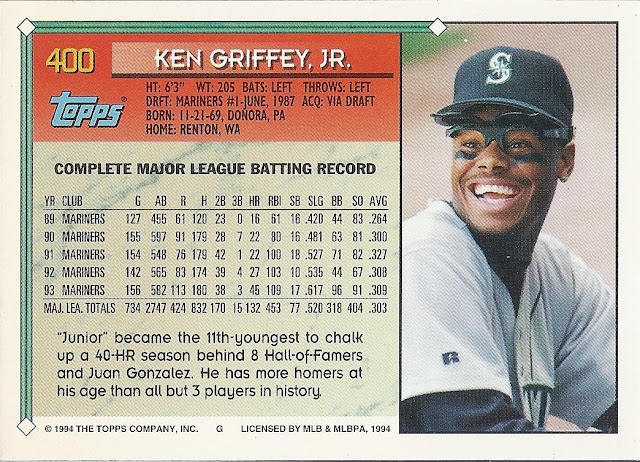 Here is a very simple but beautiful shot of the Kid in that peaceful moment when he, along with everyone else in the stadium, watches the ball float in apparent slow motion over the right field wall.
The lighting is perfect, the static field of mixed crowd in the background gives focus and singularity to Junior in the foreground, and the angle lets us see both the back of his jersey and his face gazing at what is presumably a very long fly ball. Even he looks amazed. Just a fantastic photograph.

The back gave us a reasonably nice layout with easy-to-read stats and even a blurb. The flipped-up shades photo is one of my favorite categories of Griffey photo.

Here is the third iteration of the Topps Gold Parallel:

Unlike the gold versions of the ’92 and ’93 sets, the name and only the name is in gold foil here with the Topps Gold logo up top. In previous versions the entire nameplate was done in textured gold as opposed to just flat gold in the lettering. The look here is more modern and less garish than the Topps Gold of ’93, but I still prefer the ’92 version. 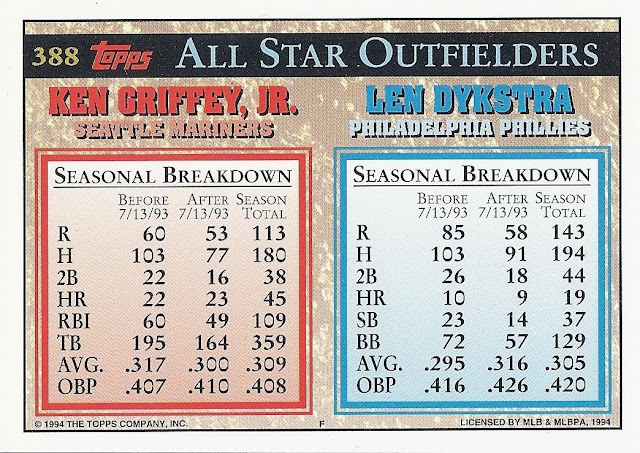 These dual-sided All-Star cards appeared in several consecutive mid-90’s Topps sets, and it wouldn’t be the only card Griffey would share with Dykstra. I like the big lump in Lenny’s cheek here (it’s massive, like he’s chewing on a rolled-up sock), but I must admit that I did at one time have a problem with this card.

When I was young and didn’t yet think like a collector, these cards confused me because of the big “1993” emblazoned across the top of the card despite it being from the 1994 set. Similarly, the 1993 version with Griffey and Any Van Slyke reads “1992” and the one in 1995 has him with Barry Bonds and says – you guessed it – 1994. Part of me wished they would just say “All-Stars” and let us assume they were from the previous year. Whatever - it’s not as big a deal as the card’s flagrant tobacco use and tacky speckled dirt background (or is that also chewed tobacco?).


As subsets go, I prefer this one: 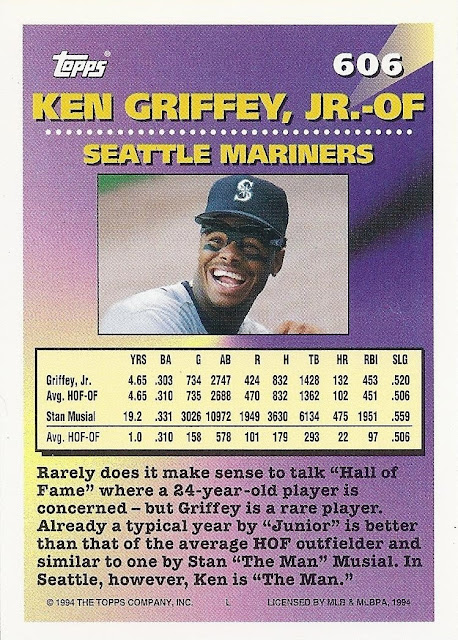 This subset is a veritable who’s who of mid-90’s stars, young and old. The front design here is kind of vanilla (the background of famous names and stats is pretty neat), but the back more than makes up for that. There we get one of my favorite stat boxes of the 90’s wherein we see Junior’s career stats up to this point compared with the average among all Hall of Fame outfielders. Below that we also get a career line for Stan Musial (with whom Junior’s career is often compared – they were both born in Donora, PA). Other stars in this subset got similar treatment: Frank Thomas’ numbers are set against Jimmie Foxx and Kirby Puckett’s against Joe DiMaggio. The recycled image FROM THE SAME SET (ARGHH!) is a little off-putting, but overall this is a really cool subset that I’d like to have seen more from. Oh, and the card back is purple. I like purple.


1994 was also the second and final year of the massive Topps Black Gold insert: 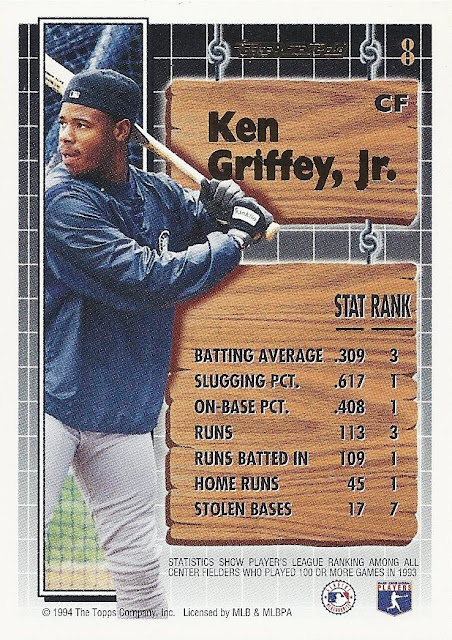 I mean "massive" in that there are 44 guys in the checklist - I don't recall these ever being considered especially rare or valuable, And yet I had no idea these were such tough pulls until I checked the back of the pack. The regular cards were 1:72 packs with several partial set winners even rarer and the grandaddy ABCD set winner seeded at 1:3600. Do I need that card? Yes, I do.

In fact, the last few cards I need to complete the Griffeys of '94 Topps are all Black Gold redemption cards, so I'll just go ahead and list those here:

Before we get to this last thing, you should know that there were two different versions of the factory set you could buy back in '94, the retail and hobby versions. The hobby version included more Pre-Production Finest samples than the retail as well as a sealed pack of special preview cards featuring three cards of one player, those cards being each of the three biggest Topps releases of that year: Bowman, Finest, and Stadium Club. There were 45 different players for which you could pull one of these "Superstar Sampler" packs, one of which was... 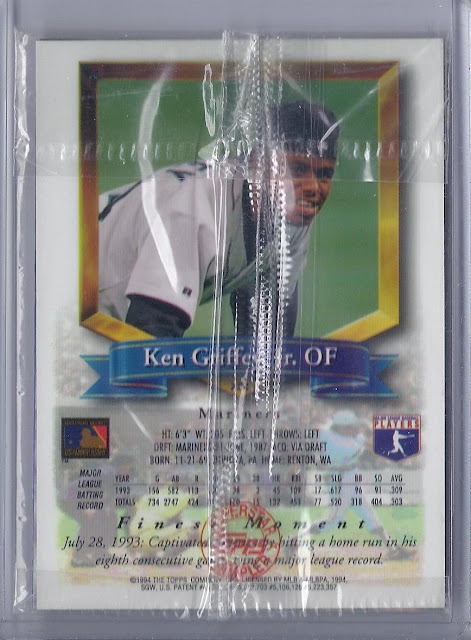 This appears to be the rarest 1994 Topps Griffey item there is to find. I've seen loosies for sale between 15 and 30 bucks a pop, but a sealed pack is very rare, indeed. The cards within are almost indistinguishable from their regular set counterparts save for a small stamp on the back of each card that looks like this:

To be honest I only recently learned of these things' existence, and I've been checking the backs of all my '94 Stadium Club, Bowman, and Finest cards ever since. I've found zero more, but they're out there, guys. Check your stacks. In the mean time, this pack is going to remain sealed and top-loaded as long as I have anything to say about it.

Overall I'm a fan of '94 Topps. I like how they eased into modernity slower than everyone else, pretty much keeping it classic longer than anyone else did. By this time Donruss, Fleer, Upper Deck - they were all decking out every one of their base cards in foil. Topps really let the photography do the talking this year, and the result is an above-average set.

Enjoy it while it lasts, though. Any "easing" Topps was doing into the modern age was certainly done by the time the '95 set came out. That thing is nuts.
Posted by The Junior Junkie at 8:30 AM