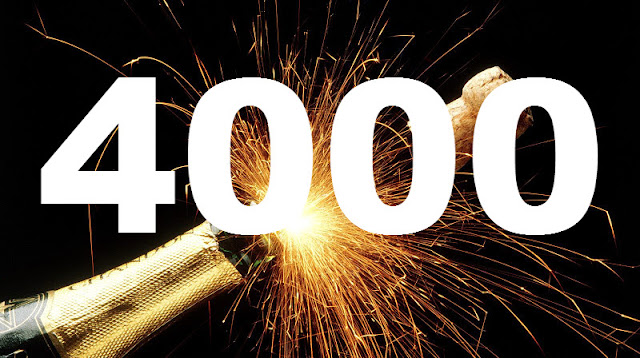 On April 28th, 2014, my Griffey collection reached a milestone: 3000 unique cards. On August 10th of this year, 469 days later, it happened again. The unique Griffey count has skyrocketed to over 4000. Wanna see the culprit?


I started the last Griffey sort at 3,992, and this was the 8th new card added. That makes it super spesh.

When we hit 3000 last year I held a giveaway, and this year will be no different. Last year’s contest was won by Jeff at One Man’s Junk (Wax) who was able to guess the number closest to the stamped numeration of card #3000. He won with Rod Carew’s jersey number of 29. As card #4000 has no numeration, this year is going to be much simpler.

Guess a number between 1 and 4000. That’s it. I ran a single randomization, and the number has already been generated with a time stamp of 8:22PM (performed on August 16th, 2015). I have a screen shot of said randomization waiting to go up on the blog no later than this time next week, so get your guesses in before then. One guess per person. I expect thousands (millions?) of entries here, so watch you don’t repeat someone else’s guess. Closest guess wins (not Price is Right rules).

The prize? 100 Griffeys of my choice from the Griffey Overflow Box. If the winner is a Griffey collector, I will try to choose only those Griffeys that person could use, provided you can get me a list. (Note: if you’re a supercollector like magicpapa or Jason from Virginia, I can’t make any promises – you may be getting some repeats, bro).

Now that the giveaway is out of the way, let’s talk about that landmark for a moment. Since the beginning of the year I’ve added 507 new unique Griffeys, just a bit short of last year’s pace. While I was averaging 2.67 new Griffeys per day in 2014, for 2015 I’m at only 2.23. So yes, growth has slowed, but I’ve been anticipating that for a while now. Why?

1. Inexpensive Griffeys are drying up. As I knock out all the cheap Griffeys, the holes in my collection become more expensive to fill.

2. Griffey’s HOF induction is upon us. Hence, his cards are enjoying a nice little price bump. Whether Beckett recognizes that or not, it’s happening. I’m watching it happen.

3. Former collectors are re-entering the market. 30-somethings who idolized Junior now have careers and expendable incomes. More are returning to the hobby every day. Case in point: I’ve watched the 1993 Finest Refractor Griffey I bought in 2013 DOUBLE in market price in just the last year. Those Holy Grail cards are on the brink of a resurgence as demand picks back up.

4. My tastes are getting more and more refined. The first scotch I enjoyed was regular old Dewar’s. A few years later Johnnie Walker Black was my go-to. Now it’s Balvenie Doublewood. I’ll still drink some Johnnie and the occasional Dewar’s on the rocks, but I pine for the single malts. The same is true for Griffey cards.


Even as the overall Griffey count nudges closer to 10,000 once more, I’m happy to report that I’ve been sticking with the quality road. This year’s acquisitions have been far more substantial with several high-profile adds and plenty of fun new relics. Despite slower growth, I have a lot more “sick” cards to show for it.

And to that point, the Top 30 Griffey Acquisitions of 2015 list is going to be a knockout come January, especially the Top 5. I have no idea how I’m going to order them. It’s a problem I love having.

Thanks for reading!
Posted by The Junior Junkie at 8:27 PM