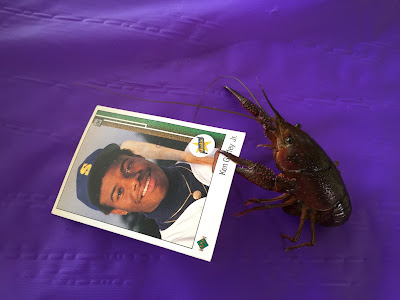 I know, I know: too many food-related posts on Wallet Card Wednesday; but here we sit at the tail end of the crawfish season (pun intended), the greatest of all seasons here in south Louisiana. It must be celebrated! For those of you who have never been to a crawfish boil, I can’t think of anything in the culinary world I can compare it to, but today I hope to give you a little taste of what they’re about. I brought my wallet card to every boil I went to. Here’s what that looked like. 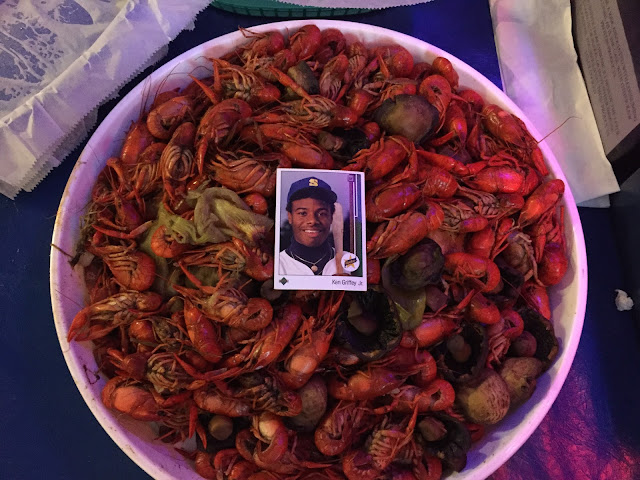 If you’ve never had a crawfish (or crayfish according to…well, I don’t really know. Apparently someone out there calls these things crayfish), they look like little baby lobsters with tails full of delicious white meat. There’s also a little meat in the claws if you’re seasoned enough a peeler to get at it. 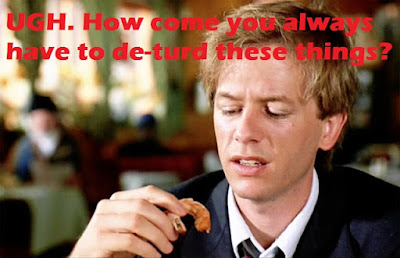 Yes, there is a ridge along the top-center of the tail that contains a little vein of poop similar to what you may find in shrimp. This is usually full of mud and completely harmless to eat. I don’t remember the last time I “de-turded” a crawfish.

In addition to the lovely tail and claw meat, there resides in the belly of a crawfish a delightful fatty “mustard” that can be sucked out of the carcass. I like to give the body a little squeeze when doing this which adds a small shot of juice in with the mustard. But beware: it’s a spicy cocktail of salty textures that can make you cough if you let it intrude too far into the throat. 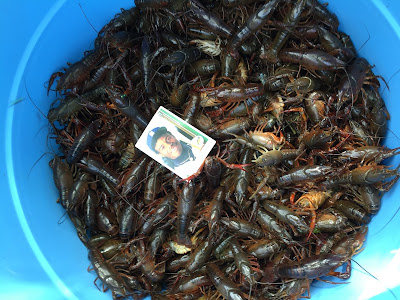 The boil itself starts with live crawfish sold in 20- or 40-lb sacks. You empty these sacks into tubs or ice chests and give them a nice rinse with the garden hose before boiling. Some folks throw a few canisters of salt in, too, which is meant to “purge” the crawfish of any excess poop in their systems; but I don’t believe this does anything except waste salt. And yummy poop.

As you can see they start off this greenish-brown color. When they hit the boiling water two things happen immediately: they die, and they turn bright red. The same is true for crabs and lobsters, of course. 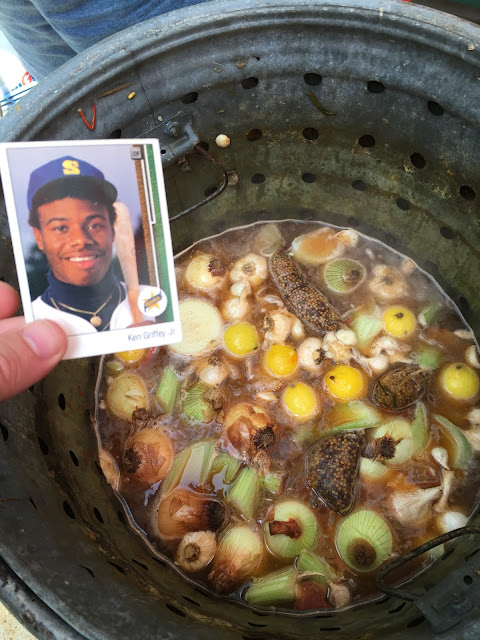 Creating the boil itself is the most important part. There are no rules as to what ingredients to use. Everyone has their own mix, but they all tend to consist of the same items in different quantities: salt, crab boil, cayenne, lemons, garlic, seasoning bags, and celery. 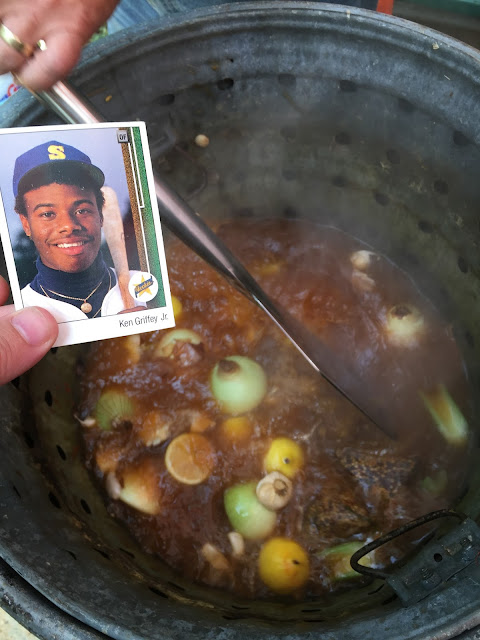 Other edibles that go into the boil are potatoes (the little red ones), onions, halved garlic pods, sausage, and large segments of corn on the cob. Some folks get creative here and throw in any number of bizarre foods - things like punctured cans of peas, sweet potatoes, and Brussels sprouts (beware – these things are like little spice magnets). 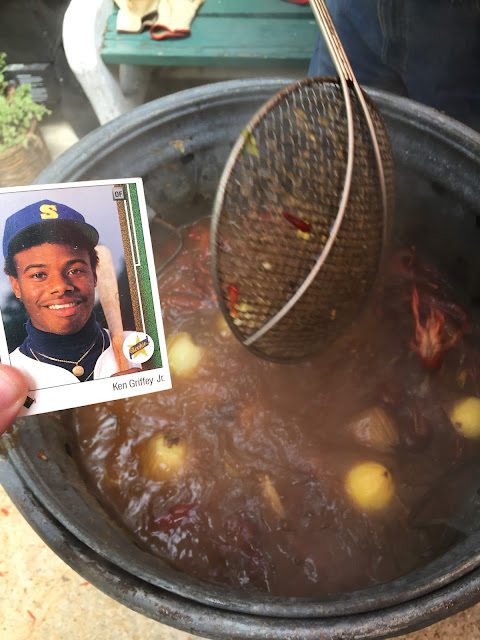 So you mix all that together, get it to a nice rolling boil, toss in the crawfish, let ‘em roll around for a while, let ‘em soak for a while, drain it (you can see an internal basket with drain holes in the picture seated in the pot), and pour it all out on a newspaper-covered table. Then everyone just kind of sits down and starts going at ‘em in whatever way they prefer. 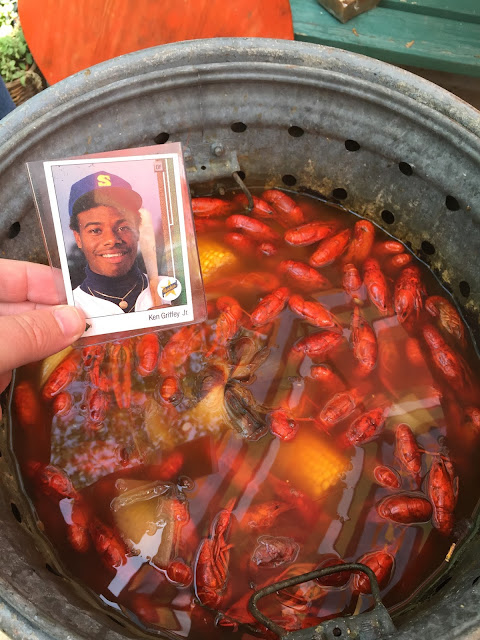 The peeling process has a sharp learning curve the key to which is simple practice and repetition. Everyone has their own style. Mine includes a quick snapping of the forward shell for easier meat extraction supplemented by ripping off of the crawfish’s genitals at the base. Sound hideous, I know, but the tail meat just slips right out. It’s a good system. 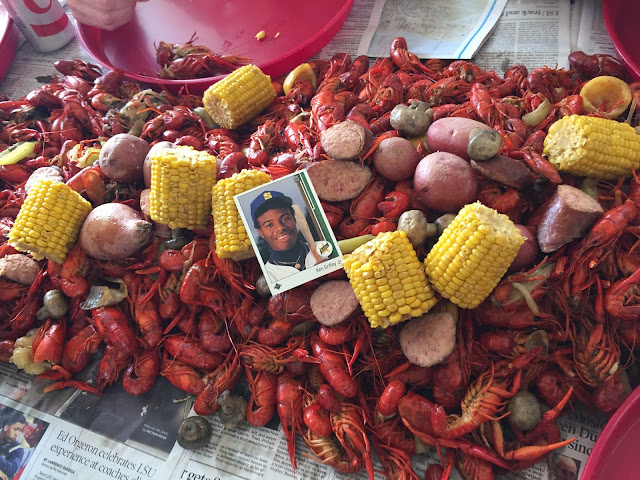 Having been to boils in numerous cities around the country, I can say there are some regional differences that cannot be ignored. Some places don’t put salt in the boil. Some don’t make them spicy at all. Many places (and this boggles my mind) season the outside of the crawfish. As in they pour spices and/or hot sauce all over the shells. Don’t do this. 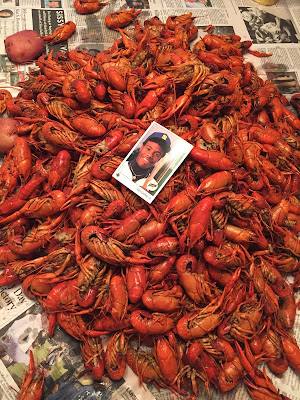 But there are other extremes, too. One time in Texas I had crawfish so spicy that nobody at the table could eat them. Being the only person at the table from New Orleans, everyone looked to me with watering eyes as if to say, “Is this right??” I confirmed that it wasn’t. We had to send them back, a big deal since they were four bucks a pound and we had gotten 20lbs for the table. Another table even followed suit. The owner of the restaurant insisted his method was correct, so I asked him to show me what he was putting into the boil. Turned out the guy was throwing cayenne in there like a lunatic and not even tasting the juice before boiling. We ended up with "cajun" hamburgers instead (burgers + hot sauce - sigh), and hopefully the guy now makes edible crawfish.

Hey, remember when this was a baseball card blog? Anyway, crawfish. Eat them. 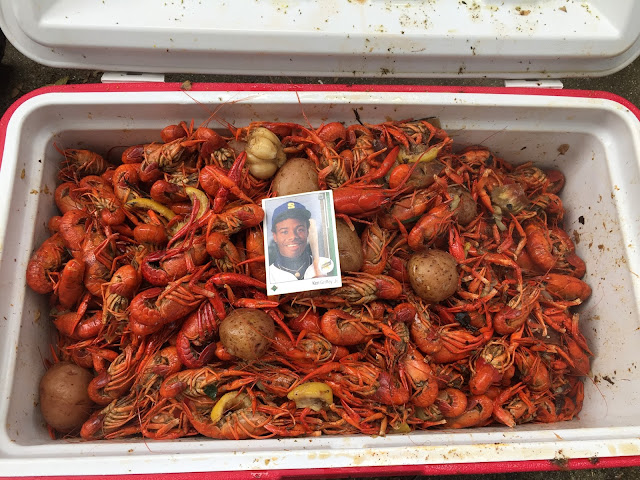