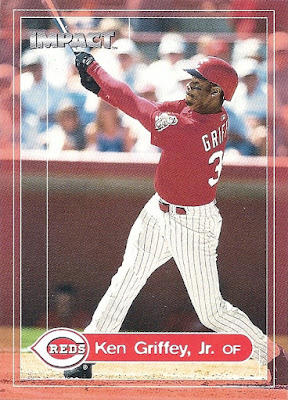 It seems that for a while there in the late 90’s through early aughts, all brands were trying to fill every niche of the market with something - anything - and no one did this more unapologetically than Fleer. These guys put out a brand for every price point, and this here is their low-end offering (you can tell, right?).

The base card design is very simple with a transparent, team-shaded border and some thin border lines. I nodded off twice while typing that description. Hey, why is the verb “describe” and the noun “description?” Why not “descripe?” Or possibly “describtion?”

Notable inserts from 2000 Impact include a set of team tattoos, an extremely limited checklist of batting glove relics, and an Autographics insert with a parallel. None of those include Griffeys, though. Moving on… 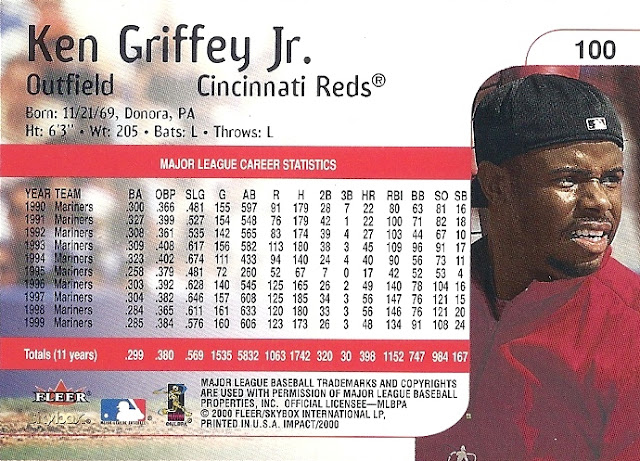 The Kid is fully extended here, trying to give that ball as much height as possible and get it over the wall. I hope he didn’t pull something – not for this mediocre, blurbless card, at least. 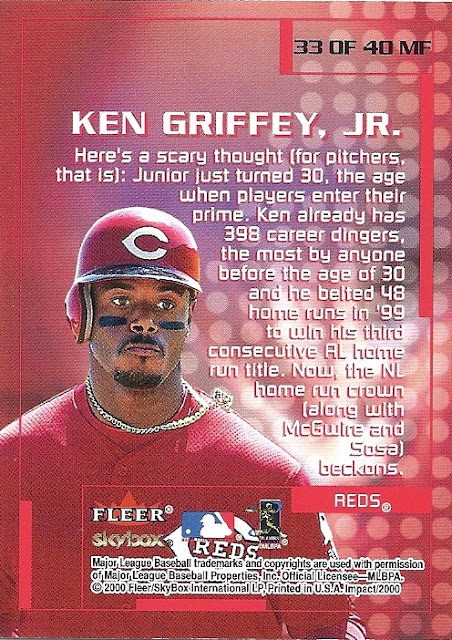 Here’s another with Griffey in full extension. This insert card actually has some foil on it and a not-so-bad-I-guess polka dot background. A surprisingly attractive insert, but nothing to write home about. 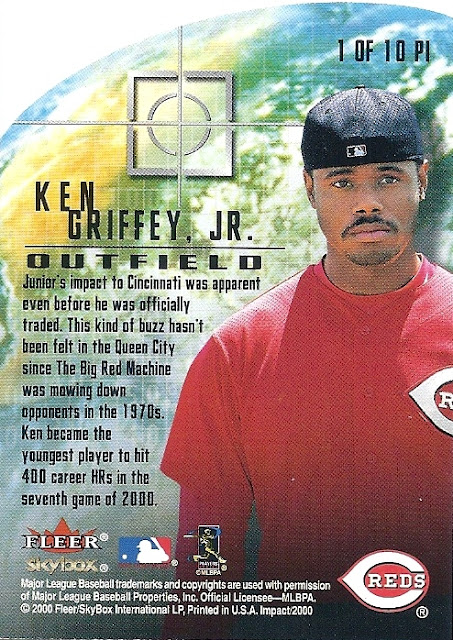 This die-cut beauty almost makes up for the blandness of the overall set. I like the addition of numbers in the backdrop to suggest a 1980's Ronald Reagan Star Wars Program-style satellite targeting system. The only drawback here is the bizarre geography of the planet below which, I hate to tell you, is not Earth.

I assumed at first (as most Americans probably would) that we were looking at the U.S, and the southern wedge shape was Texas, but the coloration is wrong, the Texas wedge is far too big (unless a Texan designed the card, of course), the land just ends south of what would be Texas so Mexico does not exist on this planet, and there appears to be another land mass jutting out just east of Galveston. Not to mention the total lack of Great Lakes or New England.

So, I thought that maybe the wedge shape could very well be India and we were actually looking at the bizarro side of the globe - the side that doesn't have cheeseburgers. But that can’t be right, either. Again, the color of the land is way off, India is way too big, and that land mass to the right of it shouldn’t exist.

It gets weirder when you look at the back of the card where it’s a mirror image of the front. This orientation makes a little more sense if we’re looking at the U.S. The coloration is mostly right and there’s a bluish watery area around where the Great Lakes would be. Of course there’s no Alaska, that mystery land mass is still there by Mexico, and the curvature of the western shore is all wrong.


Since there are only three Griffeys here and they are all inexpensive, this is one of those rare sets for which I have every Griffey there is to get. I suppose it could be argued that I need the team tattoos for the Reds and Mariners, but they’re not really on my radar. Stick a fork in this one.

You would think the idea of a big-brand base set that resembles an oddball could be charming, but that’s not how this one played out. Fleer dropped the ball with a sub-par base set and extremely limited relic pulls. The inserts help (Fleer inserts tend to be pretty good), but most of what you got out of packs was just a bunch of bland base cards. They're not especially ugly, but they're also utterly forgettable. And I cannot deny that the lack of a Griffey hit is disappointing.

This one is kind of a lame duck as low-priced sets go and could have taken a lesson or two from Collector’s Choice: skip the relics and just make cool cards. It’s no wonder Fleer Impact was a one-and-done.
Posted by The Junior Junkie at 4:35 AM