Everything is changing down here at JJHQ. Frankly I don’t even know where to start.

The first change? I have to completely vacate my card room.


There are three bedrooms in our house, one master and two, um, regular? Anyhoo, we refer to the two regular rooms as the “guest bedroom” because it has a bed and the “the office” since it has a desk. Both rooms have always pulled double-duty, the guest bedroom as a media room for my CD/DVD/VHS collection, and the office as the card/collecting room.

Well, that time is over. For reasons that will become clear in the near future my wife and I have come to an agreement, and it’s time to start de-stuffifying. Sadly, I no longer get two rooms in which to run wild with my collections and possessions – I only get one, and it must be the guest bedroom. I must condense and condense hard. There will be a garage sale, eBay auctions, lots of donations, massive trash days - the whole deal.


Where most of my organizational posts are micro in scale, dealing with sets and stacks all the way down to individual cards, this time we’re going macro. Everything had to come out one room and into the other: team boxes, complete sets, binders, my entire Griffey collection, and all the furniture where I store those things. Even the giant steel security cabinet I keep the good stuff in had to go. And on top of that, I had to get rid of most of this stuff.


For three straight days I swapped furniture, built shelving, moved things to and from the attic (no basements in NOLA), packed and unpacked boxes and bins, and made some tough decisions on what would stay and what wouldn’t. I even made the difficult decision to get rid of my entire Mystery Science Theater 3000 VHS collection (120 tapes take up a LOT of space). When it comes to getting rid of clutter, that collection has made every cut for the last 17+ years. Now, for the first time, it’s boxed and waiting to be picked up by a stranger.

After three days, I decided to take a night off from the project. Last Wednesday was my first night in my new cardspace. Everything was set up just enough that I was able to sit at my desk and do real card stuff for a little while – a little writing, answer e-mails, make some PWEs and trade packages, etc. It felt good to be back in action.

The very next night I was back at it, moving media to shelves, boxing up donations, and hanging things on the walls including my beloved framed Upper Deck super jumbo auto. 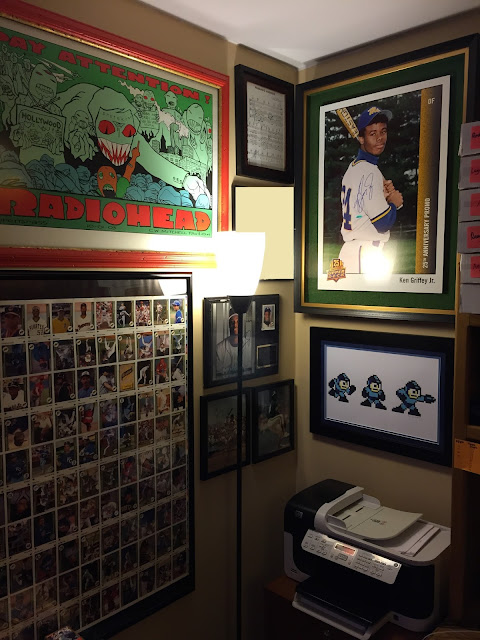 On Sunday evening, exactly one week after I began this massive move, I could finally say my new card room was complete. It turned out even better than I was hoping. Wanna see? 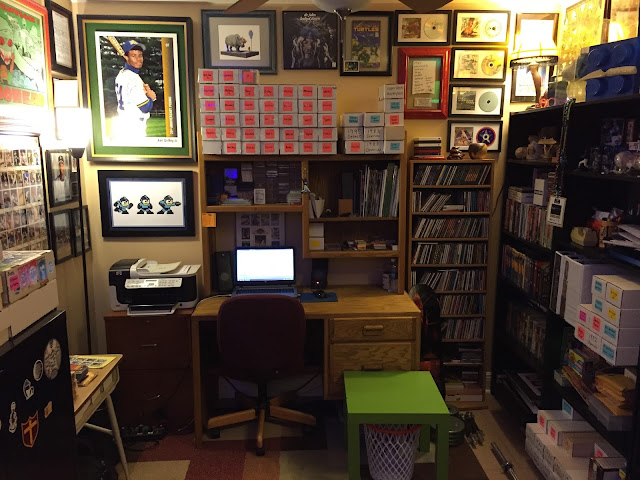 I was able to keep the desk (that hutch is invaluable when it comes to card stuff), but I got rid of the old printer cart I was using as a stack table in favor of an old-style school desk with a built-in cubby. The smooth surface is very card-friendly and the cubby fits longboxes perfectly. 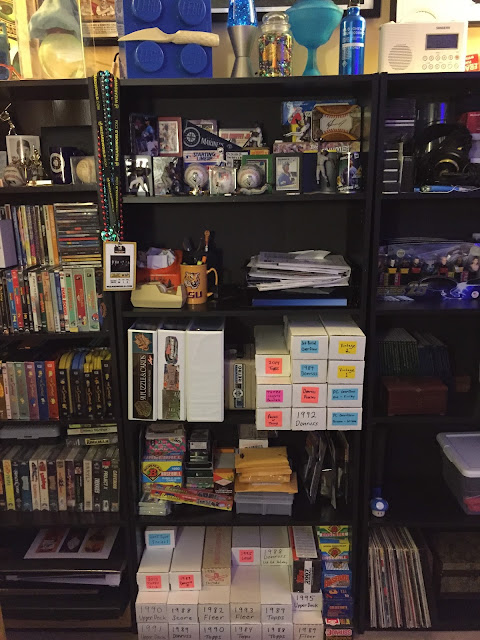 I used to store complete sets in a closet, but now I have a brand new bookcase on which to store all my baseball card goodies. I even designated the top shelf as the “Griffey Shelf.” It filled up far faster than I was expecting. 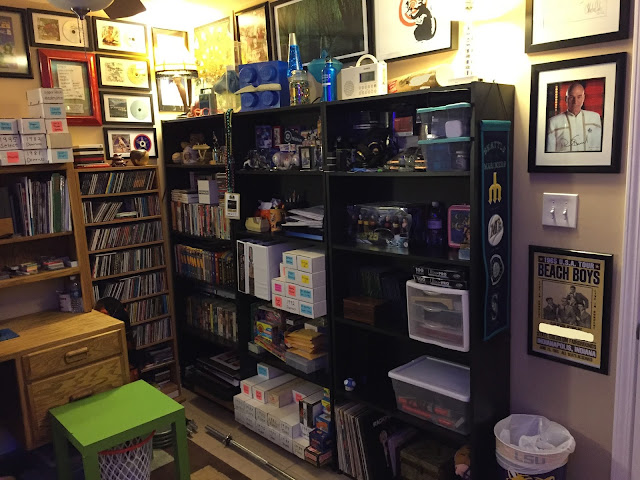 I was able to wire together a floor lamp, two small accent lamps, and a glitter lamp to a single switch. Now all of that turns on with a single button by wireless remote. I don’t know about you, but I hate direct lighting. I’m a big lamp guy. 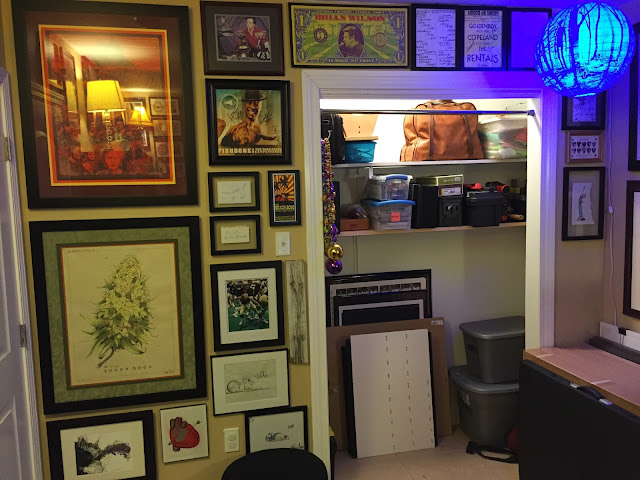 To facilitate all the storage we used to have in the former office, I removed a pair of sliding closet doors here and installed a second 90-inch shelf (which I have yet to paint as you can see). This approximates the storage space we had in the two small closets of the old room. 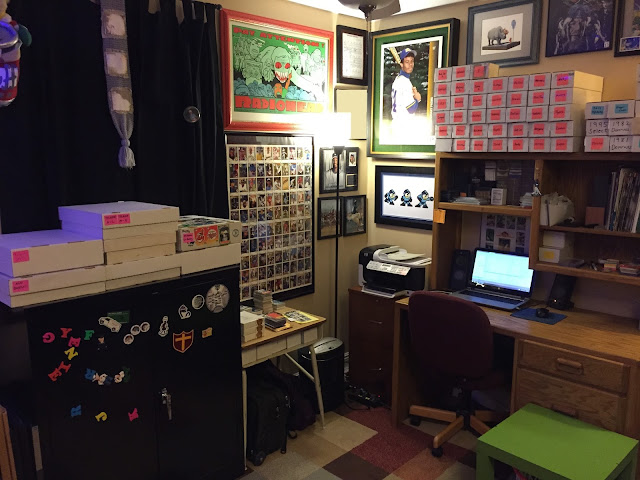 Here's my Griffey cabinet in context with the desk. You can also see the small school desk to the right of the cabinet that I now use as my stack table. See the longboxes in the cubby? They fit perfectly! 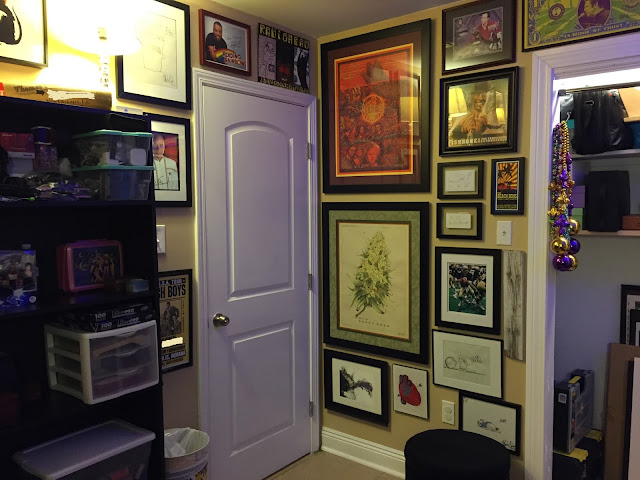 Pretty much out of wall space now.

For now the former card room is really just an eBay/garage sale staging area and furniture storage room, but it will only be that way for a few months. We have big plans on the horizon. <sigh> Big, little plans.

Adulthood lingers.
Posted by The Junior Junkie at 9:29 PM