Here is one of the most popular and talked-about sets of the 21st century. Topps Total is a thing of beauty, simple and pure. Don’t be fooled by the uncomplicated design and printing of these cards – this is a very high-concept set. It’s everybody. EVERYBODY. Veterans, rookies, minors, draft picks, and every no-name and semi-star in between got cards in Topps Total. That combined with a super simple design, limited inserts and parallels, and an almost complete lack of hits, you can think of it as the anti-super-premium set.

With a super-low price point and a perennially massive checklist that was so all-encompassing that it included even those guys who never made it into an MLB game, Topps Total was an especially big hit among team collectors. Topps knew this too as every card is numbered twice, once for the set and once for each team (Griffey’s team numbering has a “CIN” prefix). Finishing your team’s respective checklist was a tremendous challenge. Heck, people are still doing it today, thirteen years after the set’s introduction. It’s a kind of rite of passage for team guys. As a player collector I’m even a little jealous of them.

Design-wise the cards don’t change much from set to set as you will see. It’s only four years long, but the aesthetic stays the same throughout the timeline.

Here is the every Topps Total design in order as told through Griffey base cards: 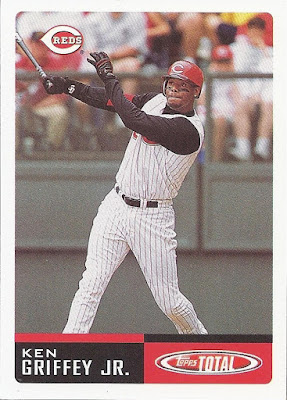 No chrome, no foil, no shiny bits – no flair at all in the entire 990-card checklist. Just a simple, reasonably glossy card with a bit of team color in a simple, bottom-mounted nameplate. Get used to this, my friends, because the song remains the same throughout the timeline. Except for the gloss. We never see that again. 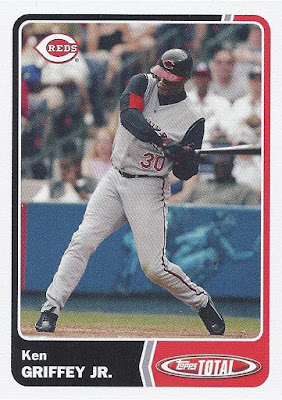 Again, not much to it, but this year's offering features a matte surface instead of gloss. We get a full border this year, but apart from that it could be easy to confuse this card with its predecessor. I like the gray line that seems to separate fields of team color behind the photo. The font in the nameplate here is about as simple as it gets. Still, there’s the top-mounted team logo. Hi, logo! 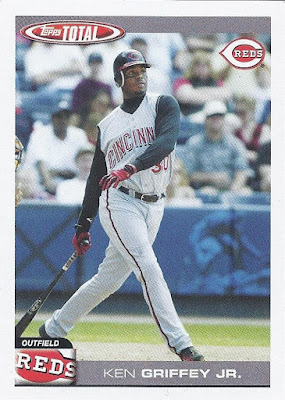 This year Topps reduced the base set by 110 cards, but they added printing plates and a small number of autographs as hits. They also moved the brand logo to the top of the card where it will remain for the remainder of the timeline. They changed things up again by giving us a gray partial border on the top and bottom only and threw in the player position and a fun close-up of the team logo in the corner opposite the go-to top-mounted full team logo. The most fun design in the timeline. 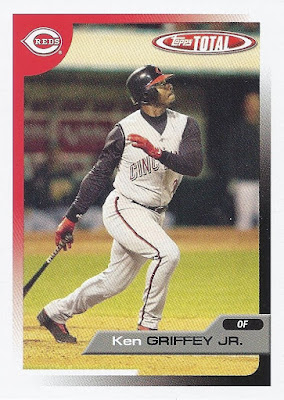 While this is the least “total” of all the Topps Total sets at only 770 cards, it is my favorite design in the timeline. We are back to the full border, but the team colors are done in split-fades anchored in opposite corners. One corner bows out to accommodate the team logo, and the nameplate and font are simple but attractive. A lot of thought went into this design. In addition to the silver parallels we’ve seen in the past, this year we got a Domination parallel which was basically this card in a chrome-like foil.

And that was it for Topps Total. Any further reduction in the size of the base set and you wouldn’t be able to call it Topps Total anymore. Topps Cheap, maybe, but not Topps Total. There is lot of hubbub in the collecting community about bringing it back, but whether that will come to fruition or not remains to be seen.


I’ll admit that when I first returned to the collecting fold a few years back I thought this was just a simple, low-end set. I now understand what Topps was doing with Topps Total, and I realize it was not made for collectors like me. It’s a set made for team collectors and completionist set-builders.

Still, I see what they were going for: a way to give collectors cards they didn’t even know they wanted. The guys that played for their favorite teams whether they made a starting roster or not, whether they played in only two games or none at all, down to the least known relief pitcher still trying to make a name for himself down on the farm. Some of these guys’ only baseball cards were Topps Total cards, and without it they may not have had any cards at all. I like to imagine there are more than a few former players who have a copy of their own Topps Total cards that they show to their kids and say, “This is daddy’s baseball card.” I think that’s pretty cool.

Here is one more look at the entire Topps Total Design Timeline: 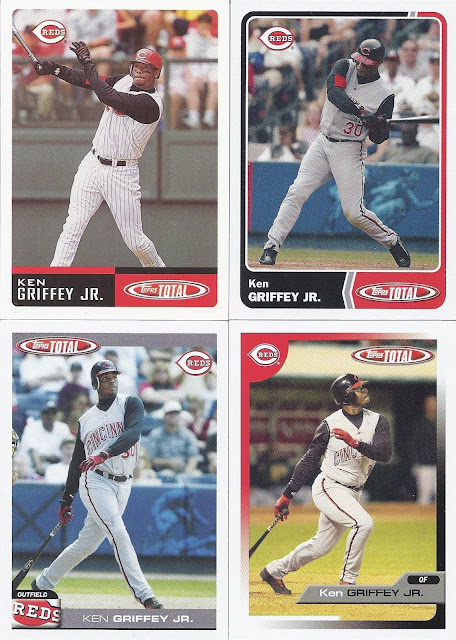