When it comes to cardboard I am a total sucker for three things: needless reprints of modern cards, cards embedded with coins n' shit, and Griffeys. For those reasons, here are a trio of Griffey checklists that I was recently able to complete listed in increasing difficulty. 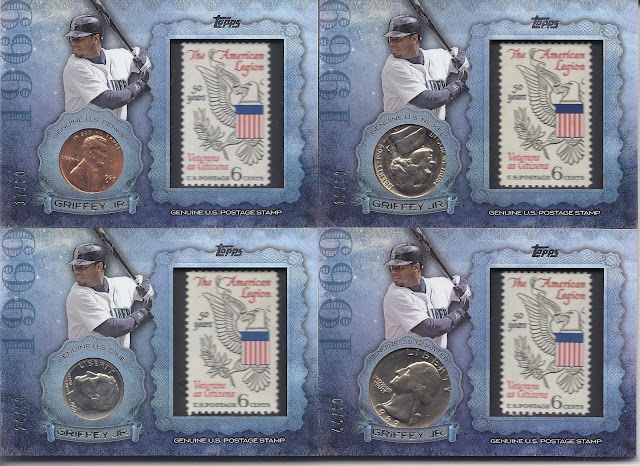 These things, man. I mean, I was never a philatelist, but you bet your boots I've been a numismatist since my grandma got me turned onto coins when I was 10. When I saw these babies were coming down the pipe, I was all, "Be affordable, awesome cards!" And they were. The penny was by far the toughest get of these four which was weird.

The stamp I know nothing about, but it is very pretty and patriotic, and unlike some of the cards in this checklist the colors in the stamp go well with the card.

The cards are serial numbered out of 50, something I didn't even notice the first time I made this post - thanks, Ryan! There is an autographed version of the quarter card for some players, but not all. More importantly, not Griffey. That makes this a complete set for our purposes.


Topps must have really turned up the Griffey dial for 2015 because these happened, too: 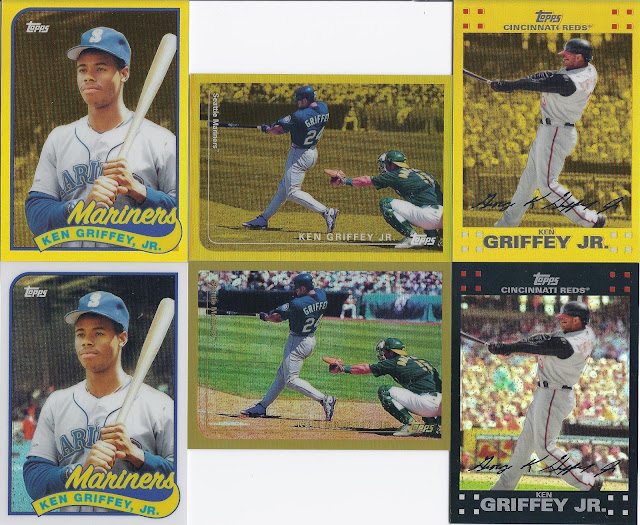 I wasn't kidding when I said I'm a sucker for reprints of cards you wouldn't expect to see reprints of. Really, who in 2015 is waiting with bated breath for a reprint of the 2007 or 1999 Topps base cards? The answer is me! I love 'em!

These are some of the best reprints Topps has ever done, too. They're extra thick and heavy - you could tile floor with them. And the refraction is strong and the chrome shiny.

It can be tricky to spot a gold parallel for that 1999 card which was already gold-bordered, so if you're not sure which one you have, just look at the grass field in the background. Green = regular, gold = well, gold.

I've been unable to find the odds of pulling the gold parallels, but I suspect they are at least a little rarer than their counterparts. I'd be more interested in learning how they landed on these three sets. I mean, 1989 is a given, but why 1999 and 2007? I'm guessing 1999 because it was his last Mariners card and 2007 because it was his last Reds card, but why not 2010, his sunset card? And 2000, his first Reds card? Are there more on the way? If so, a gold parallel of the 1990 design could be really cool.

Thanks for keeping the Griffey game going for 2015, Topps!
﻿

Finally comes a real bear of a checklist that is infamous among Griffey collectors the world over: the harrowing 100-card 2008 SPx American Hero set. I was finally able to land the last card I needed, and here it is:


With every card in the massive checklist serial numbered to 725, this thing tried my patience and exhausted all my search methods. I acquired cards in every way I know how: ebay, blind lots, trades, shows, LCS, COMC, Justcommons, and several others I'm not thinking of.

Hey, wanna see 'em all at once? Let's make it official: 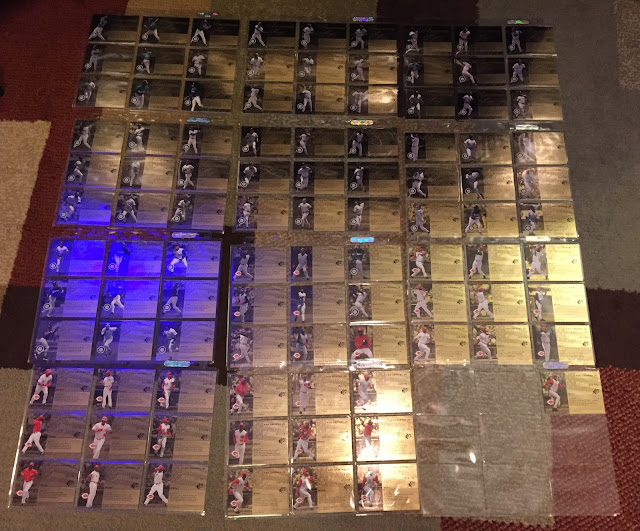 <sigh> Thing of beauty, folks. Of all the Griffey sets I've vowed to build, this one has definitely taken the most hands-on work and research to finally finish off. Pulling that final card from the envelope it was mailed in was truly surreal. I wasn't even excited at the time. I was more like, "Good, fine, whatever, it's done." Now that I can look at them all at once, I am pleased.


﻿
Thanks for reading.
Posted by The Junior Junkie at 8:30 AM