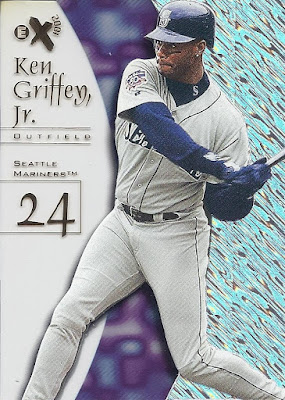 E-X had quite a lineage as the Fleer/Skybox super-premium offering, starting life in 1995 as Emotion then evolving into Emotion XL in 1996, E-X 2000 and 2001 in ’97 and ’98 respectively, E-X Century in 1999, and simply E-X for a few years thereafter. All these sets had a few things in common: high-tech cards, small base sets, and some seriously baddass inserts.

The brand’s insert game came to a head in 1997 with the introduction of the 1:288-pack mega-rare and mega-die-cut “Cut Above” insert, one of the most popular Griffey insert cards ever made. The following year, Fleer/Skybox decided to top themselves with another insert three times as rare. Despite being unnumbered, unsigned, and having no relics or autos, it remains one of the rarest and highly sought-after Griffey insert cards of all time. This despite the fact that many collectors have never even seen one.

Well, you’re going to see one today. And on top of that, I’m going to do the Griffey collecting community a service by attempting to deduce how many specimens of this unnumbered insert exist. But let’s work up to it, shall we? 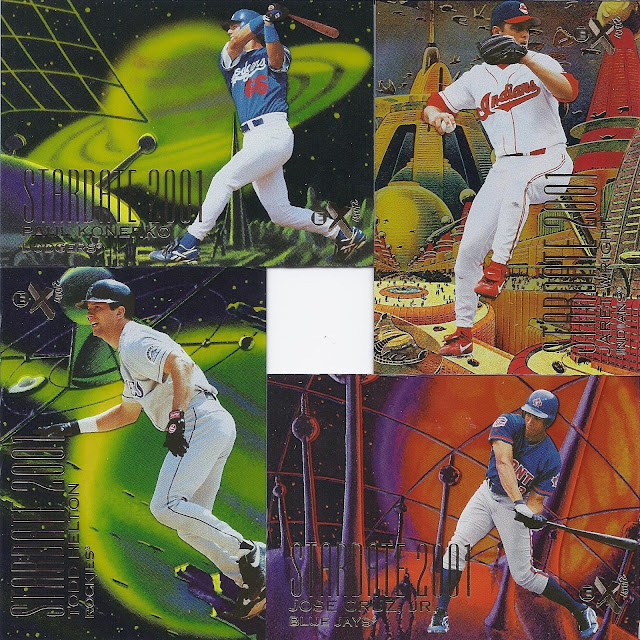 Here is one of my favorite rookie inserts of all time: Stardate 2001. I think the premise here is that these guys were supposed to be stars by 2001. The execution is a lot of action shots superimposed over the kind of futuristic scenes you would expect to see at EPCOT - a lot of that great old 50’s-style sci-fi stuff. It’s a solid checklist, too, including Paul Konerko, Sean Casey, Livan Hernandez, and Todd Helton. And the cards themselves are made of a nice, sturdy plastic. I love this insert so much that I’m leaning towards building the set, Griffey-less as it is.

Speaking of Griffeys, let’s get to ‘em: 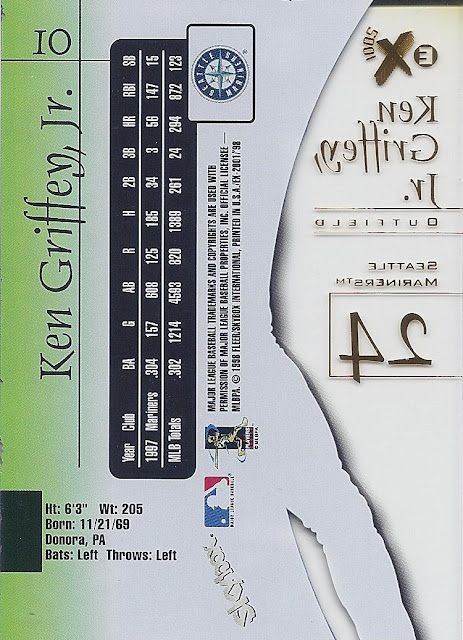 The acetate base cards are liberally stamped with gold and holofoil bisected by a curved bar of bold team coloring. They also threw some trippy patterns in there to keep things interesting. The card has a multi-level aspect to it, as well. Everything that is not clear is actually raised by the same thickness as the acetate. This makes for a very sturdy card that could almost certainly be used as a weapon if things get hairy at the LCS. While I can imagine 1998 me thinking these were the best thing ever and probably willing to pay $5.00 or more in a shop for the base card, here in 2015 they seem a little busy and tacky.

There are also two other colorways of this card, those being the two-tiered Essential Credentials parallel. The Future version is numbered out of 91 and the Now version is numbered to 10. Freaking TEN. I couldn’t possibly explain the reasoning behind these numbers better than Baseballcardpedia:

There ya go. I can’t imagine landing either of these anytime soon, but they better be pretty darn cool for their rarity. Having never seen one in person I can only go from photos I’ve pulled from the Interwebs:

The less rare Future version is on eBay right now at a discounted price of $900. I suspect my Griffey-collecting hero Magicpapa has one or two in his collection. Mike? You reading this? How do these look in person? 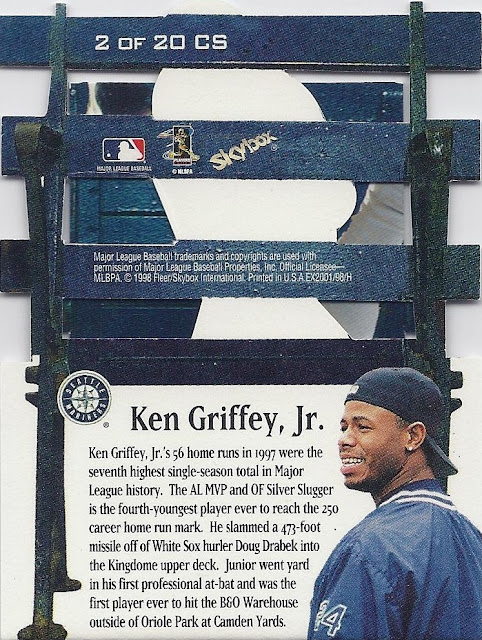 This intensely die-cut nemesis of binder storage unfolds, apparently, but I won’t be unfolding this one. Nosirree. Maybe if I land an off-condition specimen for cheap I’ll go ahead and pry it open and take a few pictures, but until then this is the best image you’re getting.

Apart from what may or may not be inside the folded part, it’s really faithful to the chair design, meaning it’s literally just a little chair with a card number and logo on it. There’d better be an insane, fold-out 3D hologram of Junior sitting in the chair giving you a thumbs up inside because otherwise I’m not certain it would be worth it to bust this puppy open. I’ve nearly succumbed to the desire to do just that, and from the effort it takes I believe there is some adhesive at work here. I get the feeling opening it up could ruin the card forever. Probably not worth it.

And now, as if 2015 could be any more the year of the whale it’s been, here is one of the rarest Griffey inserts I’ve ever owned. BEHOLD: 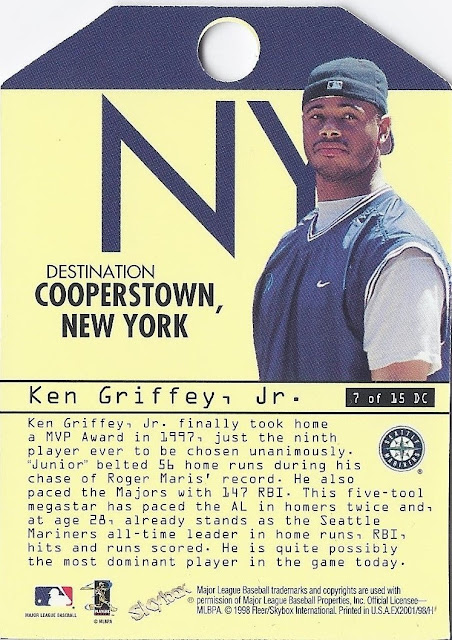 Made to look like a gold-lettered luggage tag complete with string and seeded at a whopping 1:720 packs, this card here is the bitch’s bastard. They come up for sale on the ‘Bay only a couple of times per year max, and when they do they go for way more than you would think an unnumbered, unsigned, unrelic’d card should go for. But if you’re a Griffey collector, you just WANT IT. SO. BAD.

And the stupid string that came with it.

It’s funny, too. From what I’ve read these used to go for a reasonable sum (somewhere in the 40-50 dollar range) just a few years ago. Be that as it may, one just went on eBay for over $300, and several more have gone for comparable amounts in recent months. I have to wonder if there are far fewer of these floating around than collectors thought, and now everyone is realizing this and trying to get theirs before the HOF induction. In fact, I’m confident that’s the case, and you’re about to see why.

So, how many specimens of this card actually exist? And how can we figure it out without production numbers? Sadly we can’t, but we can get pretty darn close. All you need to figure out production numbers is a numbered insert, its stated odds, and the number of cards in that insert’s checklist. The brand is hobby-only, so that simplifies things. Let’s go to the box: 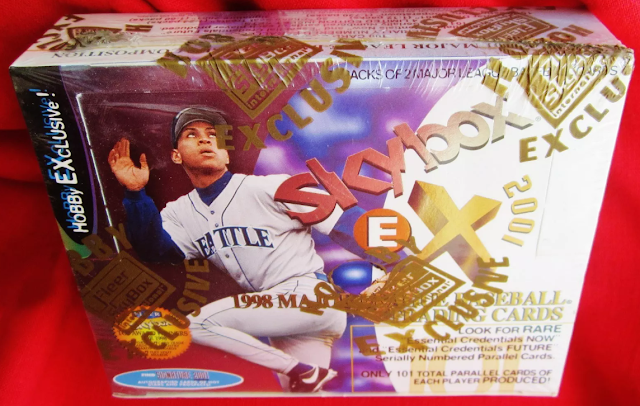 Uh-oh. We don’t have stated odds for the Essential Credentials insert, the only numbered cards in this set. This means we may never have a hard figure for how many Destination Cooperstown Griffeys there really are; but I promised I’d get us close. First let’s figure out how much one would have to spend to build a complete set of the Destination Cooperstown insert based on the stated odds.

Now let’s pretend there are 500 of this card floating around. Plugging that into the equation would mean 5,400,000 packs were produced or 225,000 boxes. Is that a reasonable sum for a super-premium brand? Nope – in fact, it’s astronomically high. Were the insert numbered we’d know for sure how many boxes were made. So, let’s look at an insert from a comparable super premium set that is numbered.

2000 E-X is the same brand by the same manufacturer produced just two years after the set in question. 2000 E-X E-Xceptional Blue #/250 is seeded at 1:288 packs. So, 250 of each card x 288 packs per pull x 15 cards in the checklist means roughly 1,080,000 packs were produced or 45,000 boxes. That’s far less than the 225,000 boxes it would take for there to be 500 specimens of the Destination Cooperstown insert, so 500 is probably not an accurate figure. Assuming (ASSUMING) the production numbers of the 1998 and 2000 sets are comparable, we can figure out roughly how many Destination Cooperstown Griffeys might exist.

Bear in mind this is only a guess, but from what I know about card printing, cards are produced in sheets of either 100 or 132, and I’ve seen a lot more 100-card sheets in my time. One sheet of these cards per player makes sense.


I can already hear the critics saying, “Junkie, you can’t take production figures from one set and apply them to a completely different set willy-nilly.” And you’re right. But I can take a very similar set made around the same time by the same manufacturer and ballpark the production number. How far off can we be here? Even if we’re off by 10,000 boxes in either direction, that puts the quantity of Griffeys at 77 on the low end and 123 on the high end (rounded down and up, respectively). My point is we are close on this.


Now it’s possible you could pull the Griffey sooner than that 10,800th pack of 1998 E-X2001. You could also pull one in your first pack or your 20,000th. The point is that statistically speaking, this is a lottery card. You don’t chase it by buying packs, and very few people will own one in their lifetime. I’m just financially irresponsible enough to have made it work.


So I have all the Griffeys I want from this brand, and all that's left are a pair of killer whale parallels. Still, for tradition’s sake, here are the Griffeys I still need from 1998 E-X2001:


I guess I wouldn’t mind the pink and purple “Future” one. It’s shiny.

Hey, how about a few gratuitous shots of that white whale and it's amazing string? 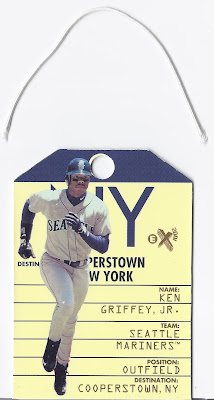 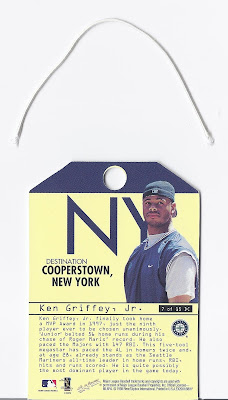 $300 for this. What a strange little hobby we have.
Posted by The Junior Junkie at 8:30 AM