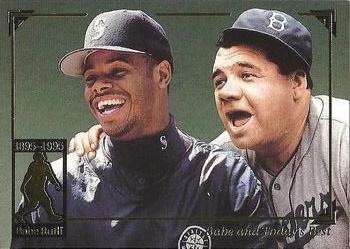 [Disclaimer: this post is a work of fiction. It is a fantasy post from sometime in early 2016. It is highly unlikely that anything in it will actually occur. Especially the part about “Griffsgiving.” Be warned.]

A lot has been happening here at The Junior Junkie, my friends. So much, in fact, that I can barely fit it all in one post.

First off, I’m happy to report that a representative from Beckett e-mailed me last week, and it turns out that my monthly article is a go. I’ll be reviewing great sets of the 90’s with a focus on Griffey cards. I’ve decided to start with one of the 90’s-est sets I know, 1994 Upper Deck, so look out for that in the next issue.

On top of that you may have noticed Beckett has also taken to heart my suggestion that Griffey cards are way undervalued in their listings because this most recent issue has a plethora of little black up arrows beside his cards. It’s about time, too. I always thought it embarrassing to see cards of McGwire and Bonds valued at more than double the same cards of Junior. It also makes no sense with all the rabid Griffey collectors out there. And with all the 90’s collectors re-entering the hobby, his card values have nowhere to go but up. I mean, have you ever met a Barry Bonds player collector who wasn’t being ironic?

In other news, we got our lump sum from last month’s lotto win; so I was finally able to buy out COMC of all the Griffeys I didn’t have yet. It was still only $3.00 shipping somehow. Up next: eBay. I’ll be sitting at my computer tonight with a bottle of scotch, placing a lot of nutty bids on dream Griffeys I’ve never been able to afford.

Then tomorrow it’s off to my LCS to stock up on storage media to accommodate all the new cards. I might also grab a case or two of some super premium product. Perhaps that new Upper Deck SP Authentic 2016 baseball everyone’s been raving about. And a few boxes of Upper Deck’s new flagship product, too. And a case of Stadium Club. Why not? Money is no object now.

I’m also pretty excited about next week’s meet & greet with Junior at Upper Deck headquarters to celebrate his HOF induction. Apparently each attendee is allowed to bring a stack of cards to be autographed, so I’ve been making my selections carefully. It was hinted to me that there is a position opening up as a card designer in their new baseball division, so I’ll be interviewing while I’m there. Apparently they’re looking for a collector’s perspective, and I’ve been told I’m a shoe-in.

Speaking of the Hall of Fame, a few fellow bloggers and myself have been given VIP passes by Major League Baseball to the induction ceremony in Cooperstown. I’m excited to meet a lot of the folks I’ve been reading and/or trading with for the past few years. I’m even more excited that the veterans committee voted to induct Will Clark, Chuck Finley, Dan Wilson, Ron Kittle, Bryan Clutterbuck, and Sherard Clinkscales in this year’s class. Who would have thought?


Of course if you weren’t one of the few given said passes, don’t despair – we’re done making the final arrangements for the First Annual Baseball Card Blogger Convention here in New Orleans. I assume everyone has received their plane tickets and hotel arrangements (Kevin, your flight from Paris was hella-expensive, so you’d better show up!). Topps, Upper Deck, and Panini will all be there giving away a ton of free product, and all of our special guest speakers have confirmed - even the Mickey Mantle hologram.

Also, I got an update from the publisher of the Wallet Card coffee table book. Apparently it comes out this summer. Thanks again, everybody, for your contributions. Your respective royalty checks should be arriving this week, so go spend it all on baseball cards. You’ve earned it.

And it’s only a few more months before Griffsgiving, the newest national holiday dedicated to Ken Griffey, Jr. I’ll be decorating my Griffey Tree with plenty of Starting Lineup figures and Pacific card ornaments. How about you?

Finally, don’t forget that The Junior Junkie Movie is coming to theaters next July. And I just found out that I’m receiving the Nobel Prize for brokering peace in the Middle East (with Griffey cards). And all the events that transpired in the film Willy Wonka and the Chocolate Factory happened but with me instead of Charlie Bucket and Griffey cards instead of candy. More on all that later.

What a year it’s been.