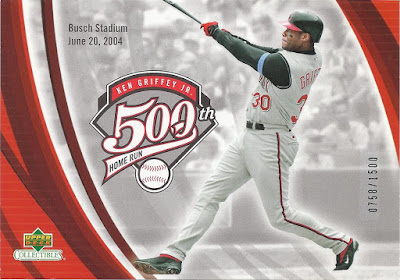 According to Blogger, this is post #500 of The Junior Junkie. I noticed it coming a few weeks ago and just happened to check it the other day when it was at 498. Phew - almost missed it.

Anyway, giveaways are customary when celebrating milestones, so here we go. I'm going to send a card-appropriate package to some lucky reader. All you have to do is read this post, then comment on it with a number between 1 and 500. I'll be running a random number generator at the end of the week to decide the winner. We will be going with Price is Right rules (closest without going over). 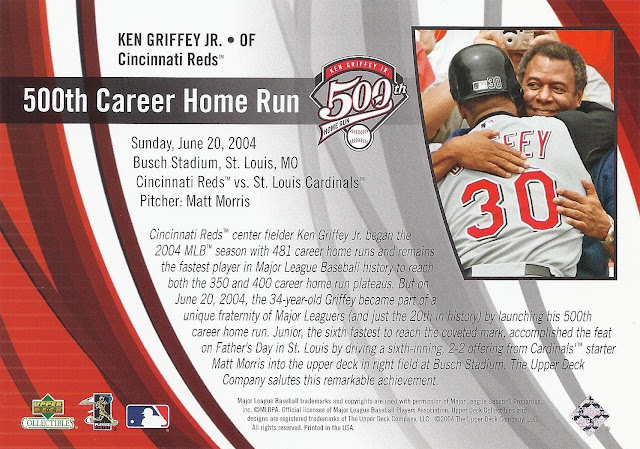 On Father's Day, June 20th of 2004, and with his Dad in attendance, Ken Griffey, Jr. became the 20th player to hit 500 home runs. Coincidentally, it was also his 2,143rd career hit, the same number of hits his Dad retired with. Over the next six years Junior would hit another 130 home runs with Cincinnati, Chicago, and back home in Seattle before hanging it up in June of 2010. He is currently #6 on the all-time list. Of those top six home run hitters who are not known PED users, Junior's only competition for most complete player comes from Willie Mays. 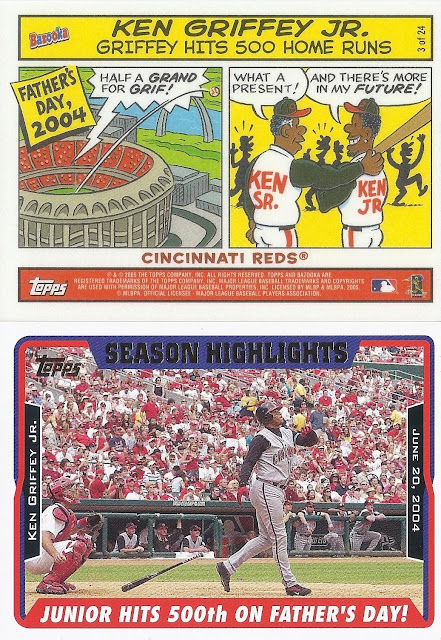 In 1991, two years after Junior's debut with the team, the Mariners enjoyed their first ever winning season since their inception in 1977. The M's went 83-79 with a win percentage of .512, their first over-.500 season in history. They have repeated that feat 11 times in the 24 years since, but there's no denying Griffey's role in that first one. Also, congratulations. Because you read the content in this post, you have a huge advantage. I will be limiting the number generator to numbers between 401 and 500, so be sure to guess somewhere in there. To those who guessed before reading, sorry! I told you to read it first. Even put it in bold.

Finally, because baseball cards are awesome, here's a few Griffeys that are numbered out of 500:


Thanks for reading, and good luck!
Posted by The Junior Junkie at 7:40 PM