Earlier this week I announced a contest which can be found here. And in case you haven't seen it, the inaugural post of the Great Griffey Frankenset has gone live here. This is the results post. Here goes:

Question 1: What is the only card number between 101-200 for which there is no Griffey in my collection?

First, I told you card #101 is not the answer, so that leaves numbers 102-200. Next I added a clue to this question in the hopes that someone would want the COMC credits enough to work it out. The clue was that I don't have a Griffey card with this number. The solution would be for you to go to The Beast where all my Griffeys are listed and use your web browser's "find on this page" function to search for card numbers starting with #102. Doing this, you would quickly find Griffey cards numbered 102-140. #141 would return no results. And that's your answer: 141. After that is an unbroken line of Griffeys all the way up to #202 (and yes, there is a #177!).

Congrats to lifetimetopps, Josh D., Jeff, and Greg Zakwin who all got the correct answer.

Question 2: What is the lowest-numbered Topps card in the set?

It wasn't on purpose, and Topps has more than a few cards in the set eventually, but none before #25, the first appearance of any Topps cardboard in the Frankenset. I honestly don't know how that happened.

Fun fact: there are a whopping FIVE Pacific cards in the Frankenset before the first Topps card. Even I think that's pretty nuts, and I made the thing.

The highest guess here was sure to win as I don't think anyone expected the first Topps card to be so far back in the set. The person with the correct answer to question 1 and the highest guess to question 2 was Greg Zakwin of Plaschke, Thy Sweater is Argyle! Congratulations, Greg! One $5 COMC credit coming your way...


Now, for isht's and giggles:

Question 3: What is the high Beckett value of the first page of the Griffey Frankenset? 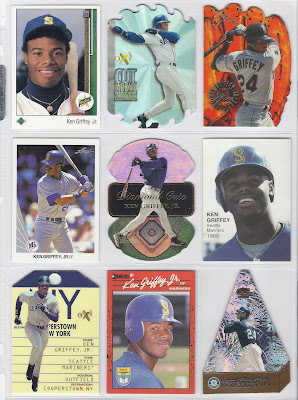 The contest was decided after question 2, so this part was really just for fun. The closest on this one was lifetimetopps with a guess of $150.

That's it! Thanks for playing, and check here every Friday for the foreseeable future for more of the Great Griffey Frankenset!
Posted by The Junior Junkie at 9:00 AM