Welcome to the first of many Griffey Frankenset Fridays! This is a new feature I will try to keep going for as long as possible. Sadly it is not going to last forever - even a player as mass-produced card-wise as Griffey is just going to stop running out of card numbers eventually, but I'm willing to push this for as long as it will last. The highest-numbered Griffey card I'm aware of is #4900, and I don't foresee another set like 2008 Upper Deck Documentary ever happening again, so it's safe to assume it won't be going any further than that. Until then, prepare to see a lot of excellent, hand-picked Griffey cardboard.
If you're not familiar with the idea of a Frankenset, it is a customized set of cards properly sequenced by card number that all tie into a connecting theme. Some frankenset themes include whole teams, mini-collections, and even just generally great cards or photos. This is the first Frankenset I'm aware of that is made up of just one player: Ken Griffey, Jr., the man of a million cards. I took the liberty of including things like inserts, parallels, cameos, and oddballs for the sake of variety and because it's just more fun that way. Enjoy!
Here is page 1 of the Great Griffey Frankenset: 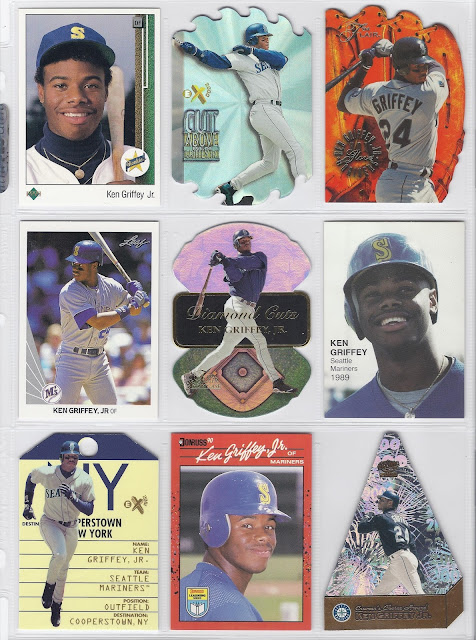 
Completeness of the Frankenset so far: 100%


Approximate retail value of this page: $610

Page 1 notes: This was by far the toughest page to assemble due to the sheer quantities of Griffeys with card numbers below 10. We're talking decades worth of inserts, parallels, and premium base set cards that were taken into account for this page. As the Frankenset gets further along and the numbers get higher, the choices become fewer and fewer as do the number of truly spectacular cards. Page 32, for example, was a breeze. On the other hand, I can honestly say that no other page in this set was as difficult for me to choose cards for than this first one. 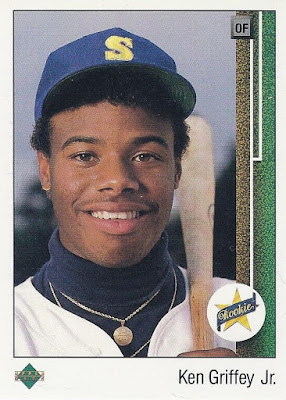 I spent a lot of precious time compiling a list of all the amazing card #1's Junior has had in the last 26 years, but the measuring stick was always this card. I looked at each candidate and tried to decide whether the card I was looking at was good enough to take the place of the original Griffey #1. None measured up. This should be no surprise at all, really. 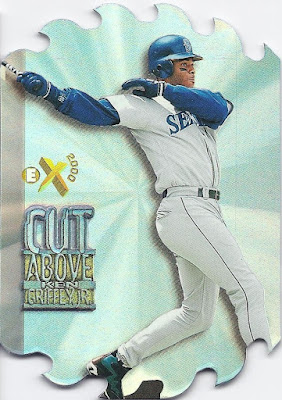 The only thing that I second-guesses about choosing this to be our #2 was whether I should actually brave sliding it into the binder page for the scan. Those pointy bits are a nightmare. 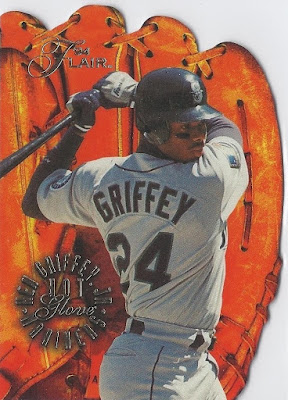 Not the rarest or most valuable #3 in Griffeydom, but certainly among the most famous and pretty early in the game for such intricate die-cutting. This one was named the best Griffey card of 1990 by The Cardboard Connection, and having finally landed one this year, I'll take any opportunity to show it off. 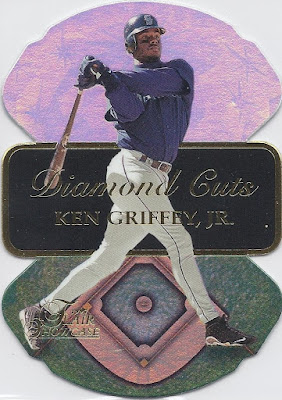 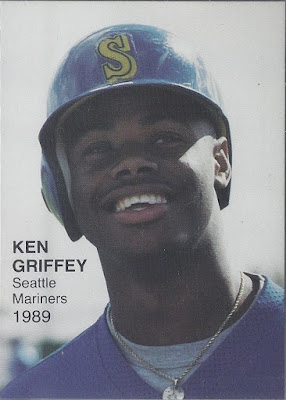 The second rookie in the Frankenset, finding this card at a show a few months ago was a big surprise as I didn't even know Pacific was making cards of any kind in 1989 let alone a Griffey rookie. This is the most sought-after card from this set of rookies from that year, and it's a nice portrait.

[UPDATE: Pacific Cards & Comics is not the same as the Pacific Trading Card Company. This is a Broder card. See comments below for link. Still, nice photo, right?] 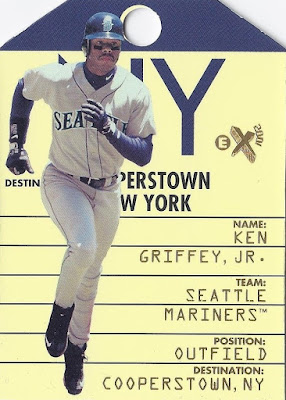 This insert seems to be more and more desirable every year. There are only around 100 of them floating around, but the fact that they aren't serial-numbered means it's taken serious collectors a while to catch on to the scarcity. It's a cute idea and a pretty well-executed card, too. Not pictured: the original string. 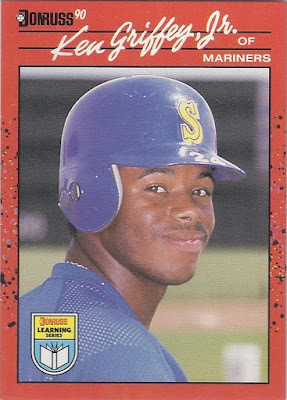 Far and away the least expensive card on the page, but notice how your eye is drawn right to it? 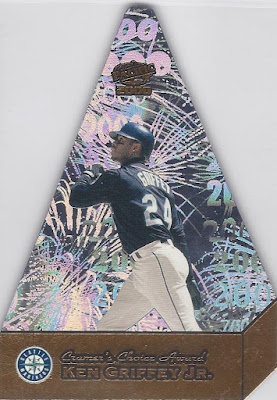 These buggers are few and far between. In fact, the one you're looking at here is literally the only one I've ever come across in real life, but I knew what it was the instant I saw it because of that characteristic shape. Heck, I only recently found out who this Cramer guy even is, but I know I respect his choices.

Here's the back of that page: 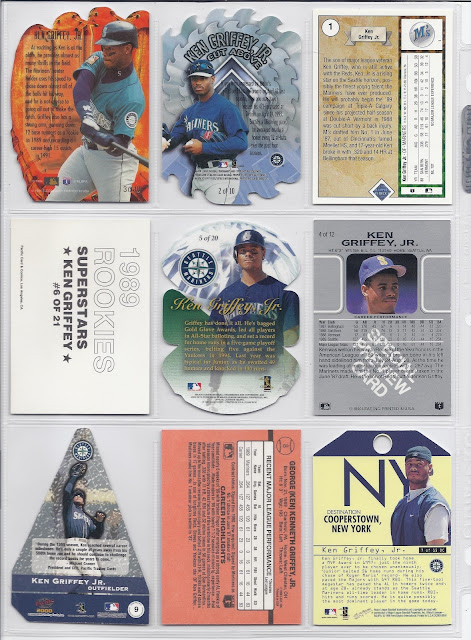 Thanks for reading, and look for page 2 next Friday!
Posted by The Junior Junkie at 8:30 AM