A guy I know made some bad decisions a few months ago. He did some drinking then decided to drive home. Before he knew it, fate and a somewhat impaired sense of direction had led him onto the longest bridge in the world (no, seriously) which brought him through a parish (you may call it a "county") that is particularly harsh on such behaviors, as they should be. 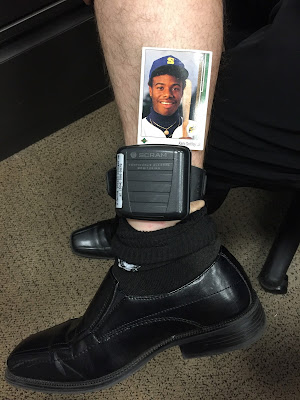 Now he has one of these puppies strapped to his leg for 30 days. It's right up against his skin, and it's sensitive enough to detect when even a single mouthful of beer has been swallowed by the wearer. From what he tells me it is tight and uncomfortable. I get the feeling he'll be calling a cab next time he knocks back a few while away from home.

I've watched as this guy's life has been turned upside down by the incident. He can't have one beer with dinner, he has to blow into a tube to start his car (and pay for the device), and he has to explain the big, clunky box hanging off his leg to his girlfriend of only a few weeks. Frankly I can't believe he let me take this picture.

This post is not to make light of driving intoxicated - quite the contrary. A lot of my posts, especially the wallet card posts, feature alcohol in some way; but I should make it clear that we always come with a plan. A designated driver, a cab from a strategic location, or a toothbrush and change of clothes for crashing at a friend's house. And most conveniently, a pregnant wife who can't drink anyway.

So yeah, don't drink and drive. Call Uber, have the bartender get you a cab, or impregnate your significant other (FYI - this last one is cheaper and way more fun).
Posted by The Junior Junkie at 8:30 AM