Here is page 2 of the Great Griffey Frankenset: 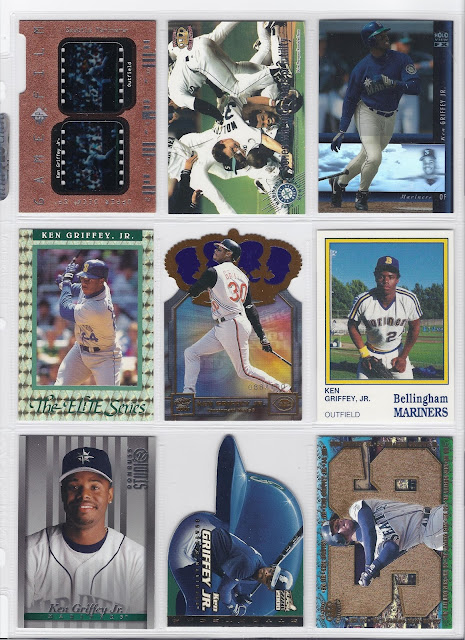 Page 2 notes: We are still very much in the toughest part of the Frankenset where there are a plethora of worthy inserts and smaller sets to choose from. You may notice that four of these nine cards were made by Pacific, a staggering ratio for the often unsung brand. What can I say? They made a ton of really cool inserts in the 90's. I also included two cards on this page that can be had for less than a dollar but that are just so darn good that no crazy-scarce $40 insert could compete. Junior Junkie don't discriminate. Junior Junkie participates. 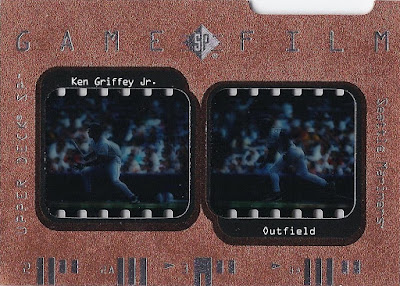 In the mid-90's several inserts that incorporated film in their designs were developed (pun most definitely intended). Inserts like 1994 Studio Editor's Choice and 1994 and 1995 Leaf Slideshow; but as cool as those were, SP took the film thing to another level in 1997. The insert was ahead of its time in that it is not only super-limited but serial numbered with a production run of only 500. Also it has a tangible relic quality that was rare this early in the relic game. 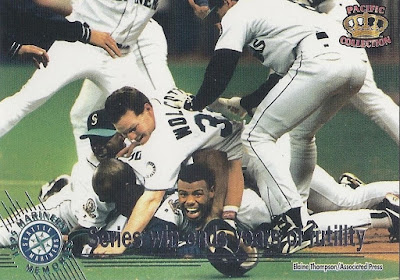 In '95 Pacific released a whole set dedicated to the Mariners' memorable postseason, and this is probably the best in the lot. The same photo appeared on Junior's 1996 Select base card (which is card #6, a spot held in this Frankenset by a totally awesome Broder rookie card), but I'm surprised it didn't make it onto more cards that year. 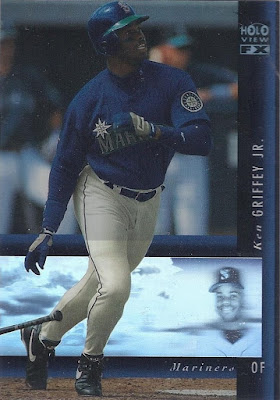 While Upper Deck's excellent combination hologram technology was used in plenty of Denny's Grand Slam and stand-alone retail sets, here we got it integrated right into an actual insert. And not just any insert: an SP insert. These made quite a splash in the hobby when they debuted. There is a much rarer red die-cut version of this card (which I don't yet have), but I like the blue better. 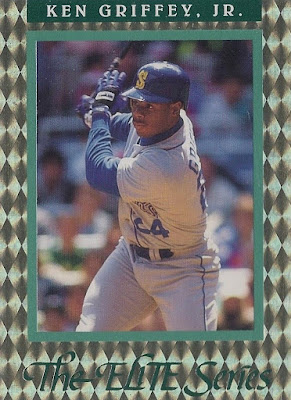 These extremely tough pulls from '92 Donruss are some of the first serial-numbered cards ever conceived. There are 10,000 cards for each player, but Donruss printed so many base cards that year that pulling one remains a pretty big deal. I busted three boxes of '92 Donruss when I was building the set and still didn't get one. Popular players in this issue continue to break the $50 mark. 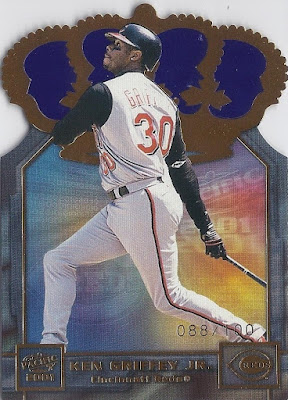 There are some slots in this Frankenset that I had a lot of trouble filling for the simple fact that I couldn't make up my mind which card deserves the spot. This spot was particularly tough. In the end I landed on this shiny, die-cut number from Pacific. The red version is rare, but this blue version numbered to only 100 is much rarer. There is also a purple version that is so rare I haven't even seen one yet. 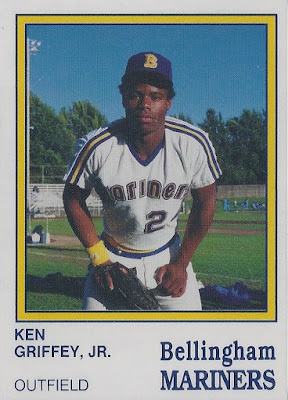 My personal favorite of Junior's many pre-rookies is this Bellingham Mariners Team Issue from 1987. There are rarer pre-rookies of the Kid, but when it comes to photo selection and overall print quality, this glossy beauty takes the cake. Junior also appears on the team photo that makes up the checklist from this set. 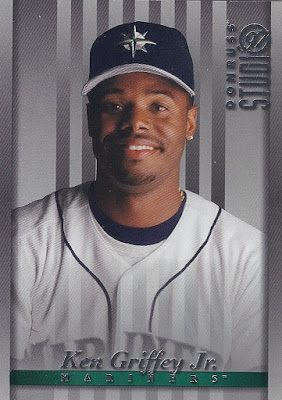 Not rare or expensive - quite the opposite, in fact. It's simply one of the best Griffey portrait cards ever. There's also an 8x10 version available if you have the patience to store it. 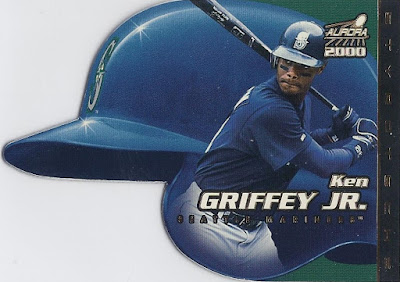 Pacific made a whole lot of bizarre inserts in their short lifespan, each with its own unique theme. The Styrotechs insert was produced for two years, and the theme seems to be that the cards are made of plastic. While the 1999 version is a regular, four-cornered card, for this iteration, Pacific went with a die-cut batting helmet shape and limited them to only 299 produced. You don't see helmets used as design elements on baseball cards very often. 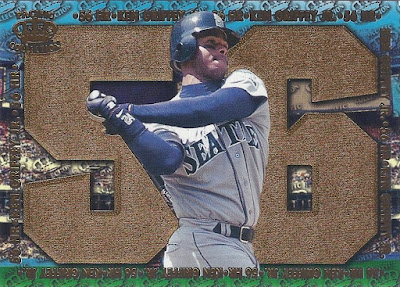 Sick of Pacific yet? This brand is strange in that what card you have is not always clear. Most companies emblazon the brand/insert name across the card front so there's no mistake. Pacific pretty much never does that. What they do is put the card number in a little white circle on the back along with the insert name, but on this one it just says "Crown Collection." I've done some research, and I'm fairly certain that this card is an insert called "Home Run Hitters." Not 100% certain, but close. Still, 56 home runs steroid-free! That's amazing, right?

Here is the back of Page 2: 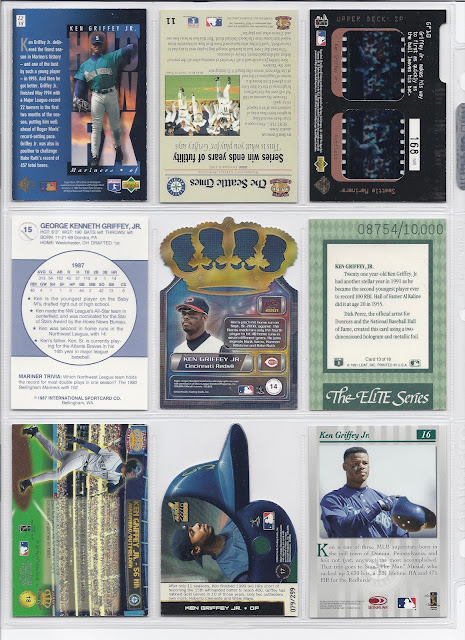 Thanks for reading, and look for page 3 next Friday!
Posted by The Junior Junkie at 8:30 AM