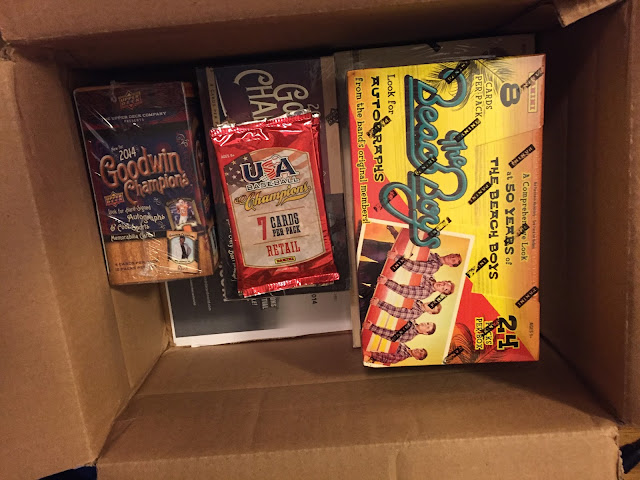 I recently went a little nuts on dacardworld.com with discount boxes. I got no Griffeys, but I’m showing them anyway because I CANNOT BE DETERRED. 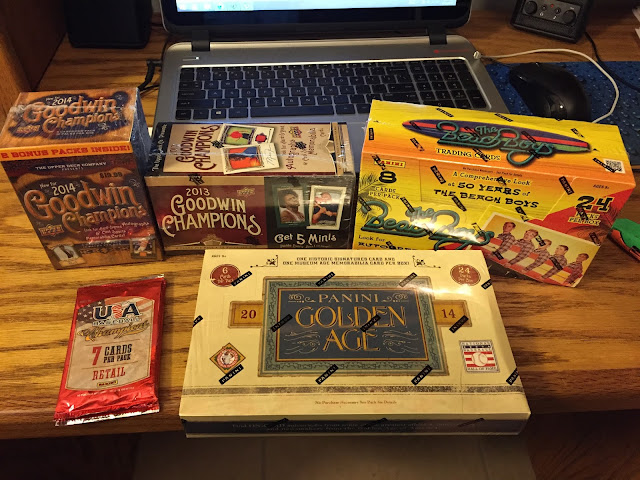 You may have already seen the break of that Beach Boys box which was the focus of this purchase. The other products I busted include:

The first product I opened was USA Baseball, and lo and behold I actually got something worthwhile: 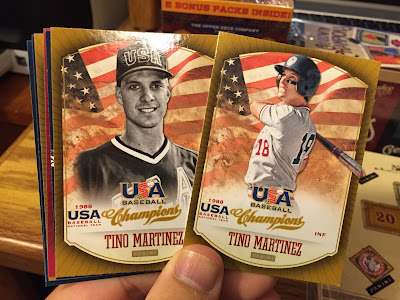 This pair of Tinos shall remain in my personal collection forever and not be sent out to any Tino collectors out there who could appreciate them more. They are mine. Forevs. (Not really.) Let’s get to that Golden Age box now because it actually had a few keepers inside. 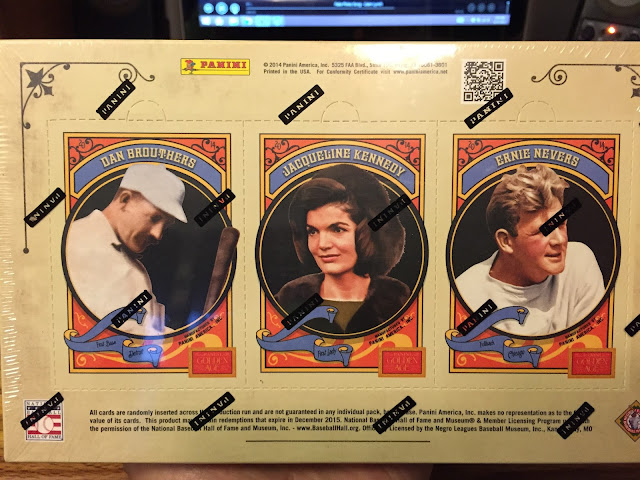 This box gave a nice variety, including these box bottoms (two of which are slated for other bloggers), 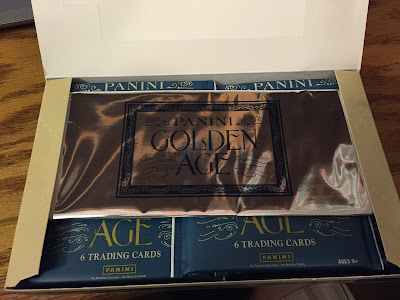 And a box topper which is something I almost never get to see. 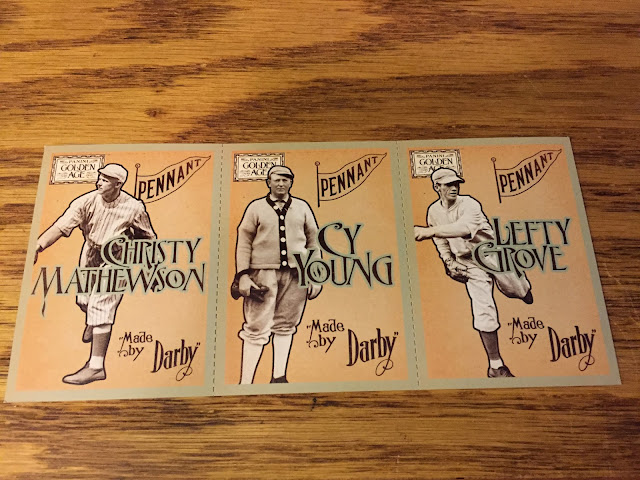 It’s pretty nice. Still, it has no place in my collection, so does anybody want it? 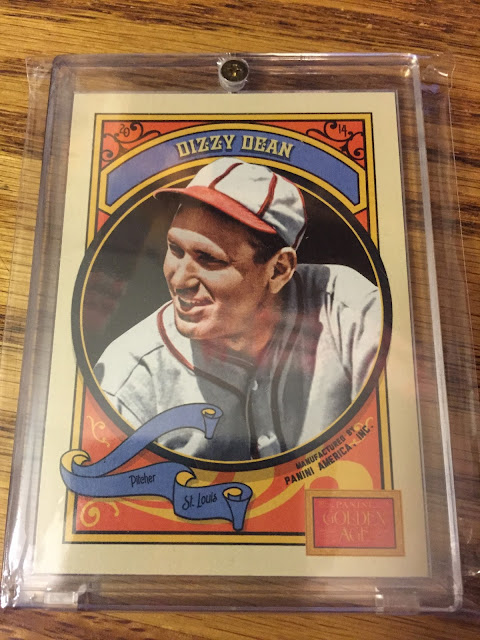 You’ve probably seen the base cards by now. This particular card I put into a case immediately because I’m going to give it to someone. There is a McDonald’s in the small Mississippi town of Wiggins where I go camping with my family every year (going on thirty years now). On the way out of town we always stop at this McD’s and eat breakfast. Not that we’re big McDonald’s people, but it’s gotten to be a tradition at this point. Anyhoo, in this McDonald’s is a large display case full of Dizzy and Daffy Dean memorabilia (Dizzy lived nearby). This card is so recent that I’m positive they don’t have one, so when we go there this Summer I will hand-deliver it to the manager of said McDonald’s where it may be enshrined for all time amidst the Big Macs and McGriddles.

An eclectic mix to say the least. I think the Richard Dreyfuss is my favorite base card. Everybody knows him in Jaws and Mr. Holland’s Opus, but take my advice and see Let it Ride. It’s in my top 10 list of all-time favorite movies.

I recognized Angela Cartwright immediately as Leisel from another one of my favorite movies, The Sound of Music. This is one I can watch literally any time. She was also the daughter from the original Lost in Space TV show (the son has a card in the set as well) which I never realized.
And yes, I am on the lookout for a Mary Tyler Moore card to go along with that Buddy Holly (see what I did there?).

I don’t know what it is, but I can’t bring myself to let go of anything with Don Knotts on it. The man is a dynamo.

The same with Josh Gibson. He's a legend of whom few people have heard. I think more people are aware of Mr. Gaedel there. Speaking of Eddie, I’m starting to think that was a gimmick and he wasn’t really as skilled a ballplayer as St. Louis originally claimed. His grand nephew (I think?) Kyle, on the other hand, was drafted by the Devil Rays. I even have a few of his cards. 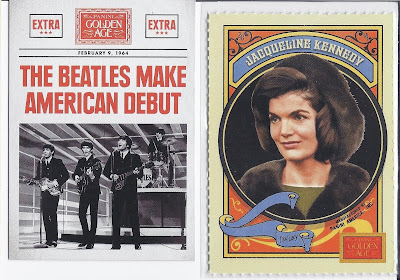 I got a pair of these Headlines-style cards. This Beatles one is by far the better one – the other was something football-related regarding the Packers beating the Giants and lost my interest entirely. Also, while Jackie O is not an insert, I am quite proud of how cleanly I was able to remove the card from the box bottom since Panini perforated the edges. It’s a shame Topps and Fleer didn’t bother doing that when they were putting out box bottoms. 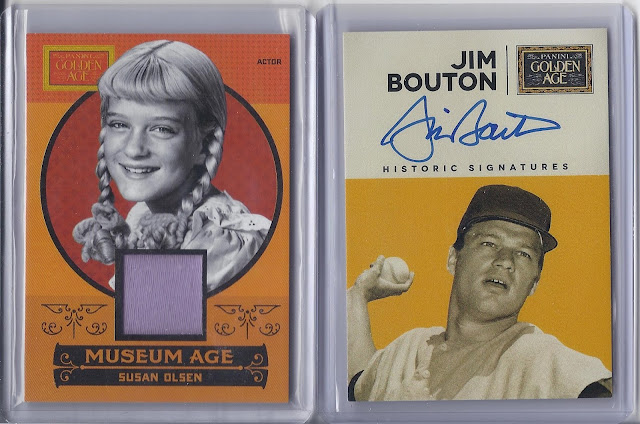 My hits were okay - Cindy from the 'Bunch and Jim Bouton, inventor of Big League Chew. Have you ever had grape Big League Chew? It's like the perfect gum. It turns me into an animal. Really, I fight eating it outright. 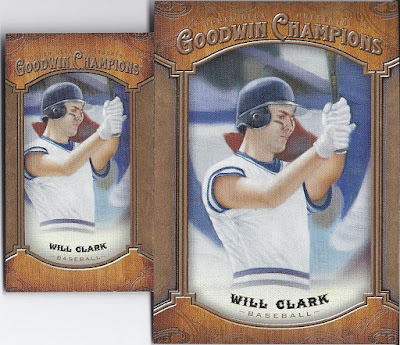 As for the Goodwin blasters, this pair of Clarks is probably the best thing to come out of them, I think that may be Will's high school baseball uniform because it was also my high school, and the colors are blue and white. And his college team is red. Did Will play for any other blue and white teams? 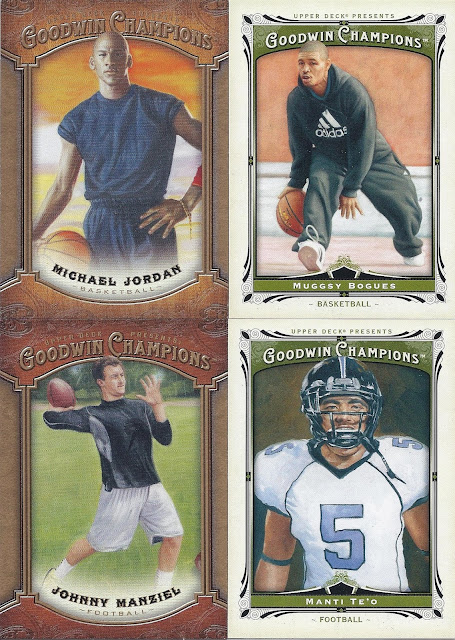 I don't really collect football or basketball either, but these are keepers. Hee-hee - remember that fake Internet girlfriend thing that happened to Te'o? It's the only reason I'm keeping this card. Is that mean?

More non-baseball keepers. A Michael Phelps is a pretty good drink. It's made from Jeremiah Weed sweet tea vodka and water. Weed and water. Get it??? But seriously, he's a hero 'n stuff.

Here are the better baseball cards I pulled. I really like Frank Thomas' jersey here and the fact that Abbott got a card in the checklist. The Olerud is probably going to a fellow blogger who collects autograph photos (You can guess who that is), but before it does, check out the mug on that gray jersey kid in the background. He looks like an adolescent mutant Babe Ruth. 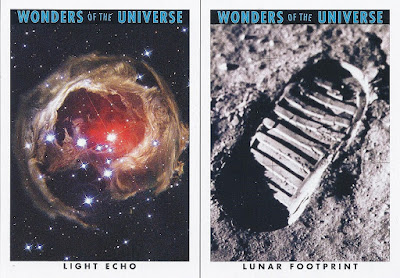 These are reasonably neat. I'd like to see more. 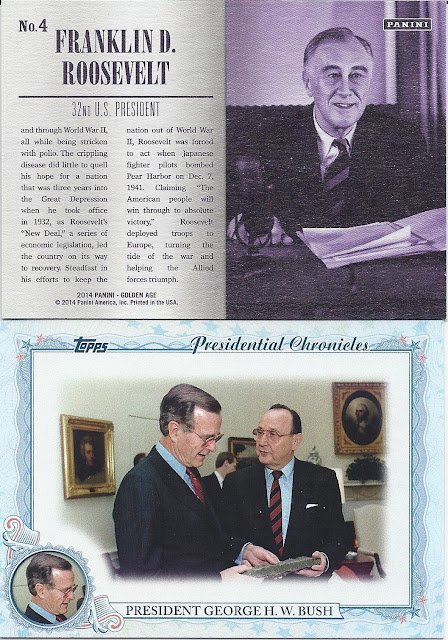 I don't actively pursue presidential cards, but I keep them. Both are nice, but I think I prefer the Panini set a little better.

I'm not going to show a bunch of Archives because I didn't pull anything fancy, and everybody's already shown most of them. These were the ones that stuck out for me. The stock is thinner than the last few Archives sets, but it's hardly keeping me from liking the cards.

I ended up with a few of the Griffey base card from the Nachos Grande case break, but I didn't pull one from these packs. 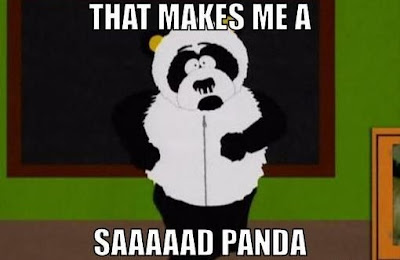 I guess I'll just wait for the group break cards to arrive. Or give in and buy a blaster. Probably the second one.
Posted by The Junior Junkie at 10:27 PM