This has been the year of the Holy Grail here at The Junior Junkie. While for the last few years my focus has been to acquire Griffeys from the bottom up (in terms of price/rarity), in the last few months I’ve been going after top Griffeys, picking off one high-end card after another. I completed my Tiffany rookie rainbow, I landed the beloved ’94 Upper Deck Griffey/Mantle dual auto, and I received an amazingly cool signed 18”x25” 25th Anniversary promo from Upper Deck’s Random Act of Kindness program.

These kinds of cards come with a price tag, though, my friends; and for that reason I’ve been willing to make certain concessions. For example, when I finally landed the Griffey/Mantle dual auto, I got one that was slabbed a PSA 7 – not the highest grade, but one I could reasonably afford. Most of the 9’s I’ve seen have gone for four figures while mine was hundreds of dollars less than that. Perhaps I’ll upgrade one day; but until then, I can tick that box off the ol’ Griffey checklist with confidence. 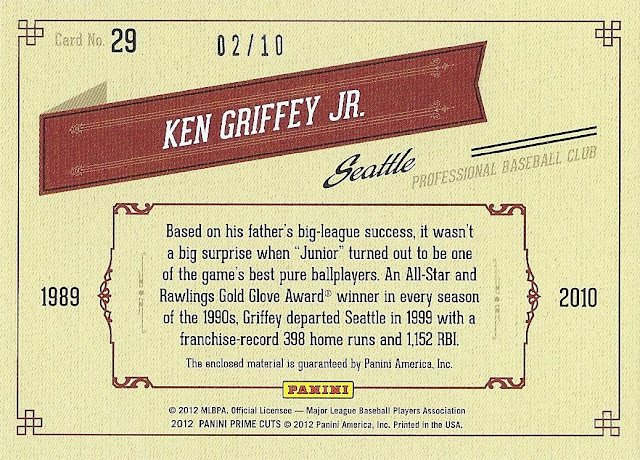 Now take this recent addition from 2012 Playoff Prime Cuts. This one is a Timeline triple jersey relic numbered out of only ten – already one of my lowest-numbered Griffeys. I don’t pursue cards like this very actively; but the price was crazy low, and I couldn’t justify not pulling the trigger.

So we have an attractive card bought at a low price that arrived quickly with zero condition issues. Nothing was compromised in this purchase, and all is right with the world. This is our baseline. 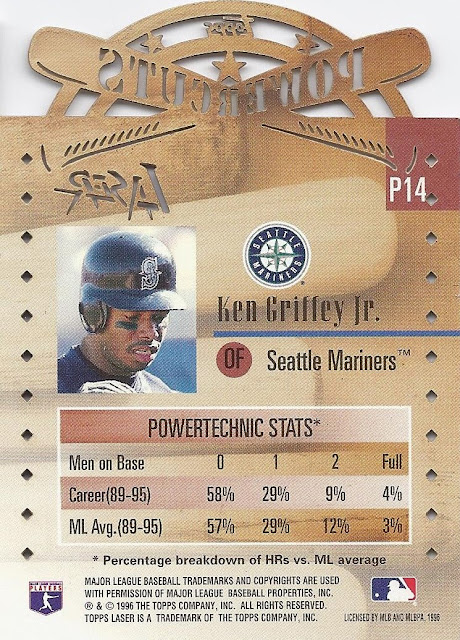 This, however, was a compromise. It’s the rare Power Cuts insert from 1996 Topps Laser, a tough find that doesn’t come up for sale very often. There is currently a PSA 10 specimen on eBay for $499.98 - I landed the one you see here for eight bucks.

Everything about this card is clean and nice apart from the tarnished bits at the top. I’ve taken a magnifying glass to it and there’s nothing that can be done, but for 0.016% of the price of a mint copy, I will not complain. At such a discount, this was a small compromise. 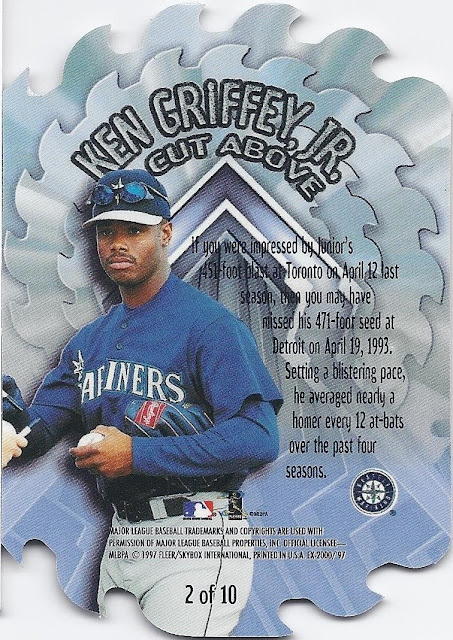 You’re looking at my latest and greatest - the 1997 E-X2000 Cut Above #2. Some of you may already recognize it as one of the coolest and rarest inserts the 90’s produced and one heavily sought-after Griffey card. At 1:288 premium packs, I’m pretty certain this is the most highly-prized unsigned/unnumbered insert in Griffeydom. It appears on Cardboard Connection’s list of the Top 10 Griffeys of All Time (of which I have eight), and there is currently one on eBay for $525.00 with no option for a Best Offer. I got mine for less than half that…

…because of a print line.

I’m compelled to defend the card a little here because said print line, despite being seriously intensified by this scan, is not all that bad. In-hand it doesn’t take away from the coolness of the card much at all (and the condition is perfect in every other way it can be), but it is there and it is noticeable.

So how much does a print line cost? Should it cut the value of a card in half? Or by 10%? Or 90? If this card was a BGS 10 in every other way but surface (I assume that’s where print lines would affect grade), what would you grade it? I mean, it came out of the pack like this, right?

Still, this was a major compromise. I fully intend on upgrading someday; but again, until then, I’ve got that Cut Above game on lockdown and for a much more reasonable price than the current eBayer selling one would have you think was possible.

Here’s a compromised purchase with a twist:


This is the 1995 Leaf Statistical Standouts insert. These were numbered out of 5000, but it might as well have been 100 because they are not an easy find. Lucky/unlucky for me I scored this one on eBay for a pretty reasonable Best Offer (I’m a huge fanboy of ’95 Leaf and have to have them all). It arrived in the mail looking mint in a plastic snap case. However, upon unsnapping the case (WARNING: this part is not for the faint of heart), several chunks of card back came with it. 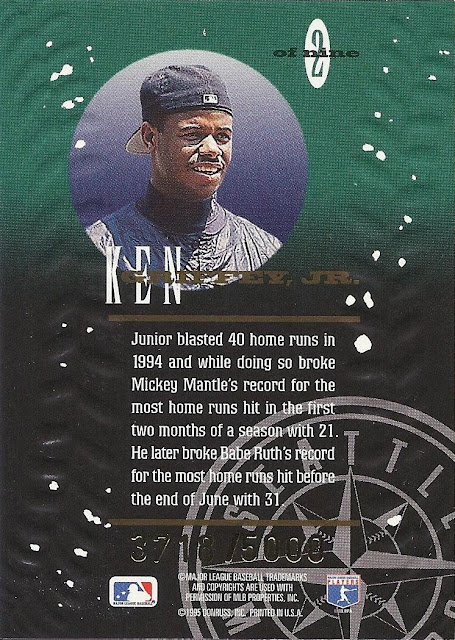 Now what used to be a lovely, unbroken field of green and black gloss is a herd of white paper stars in a black sky of disappointment and hidden rage. I e-mailed the seller what happened and he messaged me back that he would send a full refund and I could keep the card. Sure enough, minutes later he made good.

The front of the card is damn near flawless, and the numbering wasn’t damaged; so the card is stored in the binder with the rest of the Griffeys as though nothing was amiss; but am I still waiting to land a mint one at a fair price? You bet I am. Then again it’s tough to beat free. That’s a compromise I can make anytime.

The moral of all this is that while it can be very satisfying to own a flawless copy of any Griffey card, a little compromise can save you several hundred bucks which, in turn, can buy you more Griffeys. After all, a checked box is a checked box.

There. Purchase justified.
Posted by The Junior Junkie at 6:57 PM