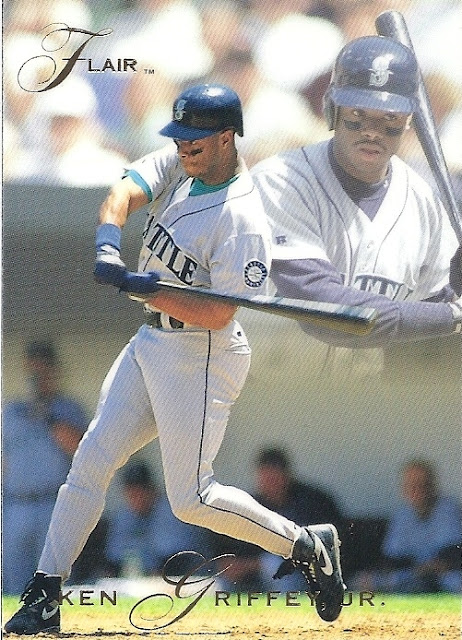 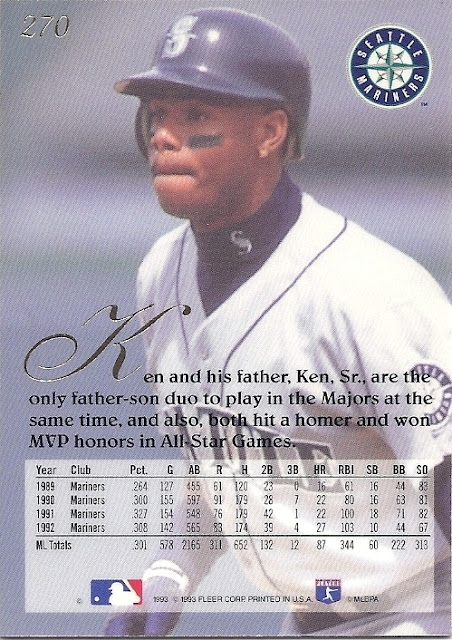 Is this a good Griffey card? Yes.  The first Flair set, and it's a beauty.

The set: This is Fleer's foray into the realm of the Super-Premium.  Topps went in a whole new direction for Finest, their super-premium set, by embracing the Chromium process while Fleer took the pre-existing standards of great cardmaking - quality stock, quality printing, gold foil lettering, and high gloss - and ran out of the stadium with them.  Flair is the product, and it is sweet.

These were the nice things you're not supposed to let kids play with.  They made you feel older, classier, responsible for something beautiful.  Even as a kid, they made you want to put on a smoking jacket and pour a glass of cognac.

The detail in the printing was finer than anything we'd seen.  The ultra high-gloss made the card look like it had just been dipped in syrup.  The pimary lettering was gold foil.  And the cards were all so thick and heavy in your hand, like a painting as compared to a photograph.  They had weight, dimension, and substance.

I swear I just saw on another blog that someone else said the exact same thing, but it made me chuckle because it happened to me, too: I showed one of these to my Dad when I was a kid, and he really looked at it and said "wow."  That was impactful.

Instead of mylar packs, the cards came in little boxes.  They were more expensive, and much more difficult to convince Mom to buy, but dammit if she didn't spoil me rotten.

There is only one insert called "Wave of the Future" comprised exclusively of rookies.  I don't know why they bothered making a rookie insert with no star insert and no parallels.  Still, the base set really was enough on its own. 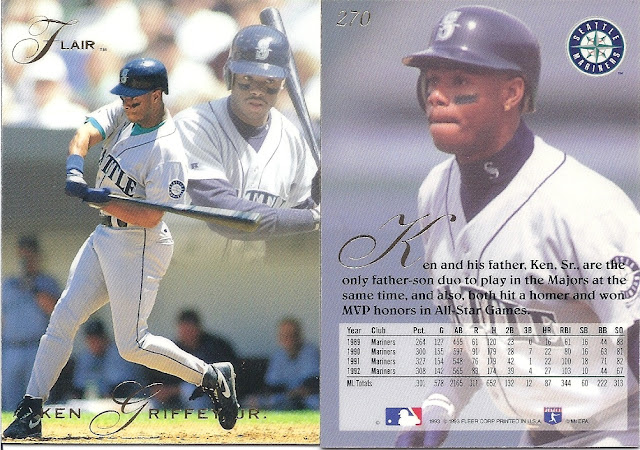 You've got to admit Fleer did a heckuva job on the printing here.  Griffey looks crystal-clear on that front.  Look at his eyes - you can almost see the ball hanging in mid-air, just beyond the edge of the card.  I tend to make fun of yearbooky, faded background pictures, but that one balances out the card nicely.  This is a truly awesome Griffey, folks.

1993 Flair is a rare one-Griffey set, so there's no ridiculous list of cards for me to complain about not having.  Enjoy it, because it doesn't happen a lot.

I will note that tonight I return to Zephyr field to watch the #2-ranked LSU Tigers take on the Golden Eagles of Southern Mississippi.  I'm knocking off work early and heading to the tailgate in my purple and gold.  We are all praying it doesn't get rained out.  Luckily the tailgate is on regardless of the whether the game takes place.  Two baseball games in 5 days - it's gotta be some kind of personal record.

Happy hump day!
Posted by The Junior Junkie at 11:57 AM