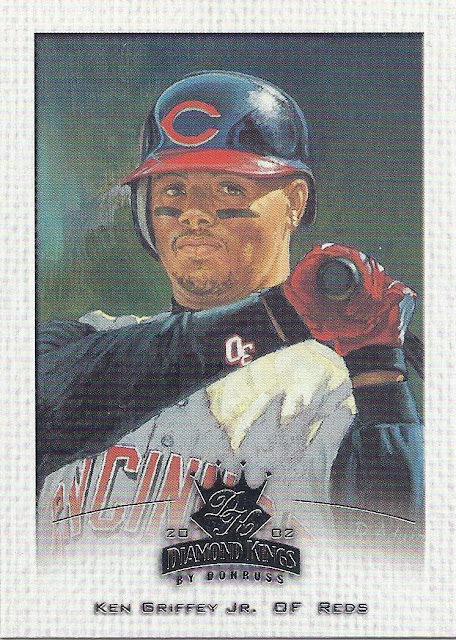 In my collection: 2 regular

Is this a good Griffey card? Yes.  A nice design, a new artist, and a very unlikely set in general.

The set: Over a 20-year span, Donruss Diamond Kings grew miraculously from subset to insert to non- existence and finally to it's very own brand.  In that time it survived a bankruptcy, a new owner, two years of utter non-being, and several different artists.  Diamond Kings as their own brand would last four years.

How did this unlikely evolution occur?  Long story short, Donruss had been owned by Pinnacle who declared bankruptcy in 1998.  It was thought that the Diamond King may be gone forever until Playoff, a football brand, picked up the Donruss brand the same year.  After two years of non-production they got their MLB license in 2001 and went positively buck wild, creating numerous variations of the Diamond King that year.  The decision was made to expound on that and give DK's them their own set for 2002.

One pretty cool aspect of this card is that they show you all the previous appearances by that player in a Diamond King set like it was a bona-fide MLB designation.  Also, there's a little blurb about the artist right there on the card - something I remember Donruss only doing once before for previous artist-in-residence Mr. Dick Perez, and it was on a checklist. 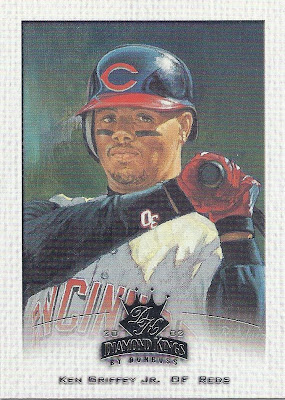 I really like the design here.  The new DK logo looks great in silver foil.  The card has a bit of thickness to it as well as a slight canvas texturing.  All that combined with the understated framing of the portrait make for a pretty good-looking card.

Now this is still a Diamond King we're talking about, so we mustn't suspend criticism entirely.  I will admit that Griffey looks a little weird - his left eye is a bit droopy like that of a stroke victim, and the proportions of his face seem a little off.  Still, the lighting and shadow are great, the pose and background look good, and the detail is solid.  Overall, I've seen worse Diamond King cards.  Ahem.  Yeah.

In closing. Mondays suck.  Have a great week.
Posted by The Junior Junkie at 1:48 PM