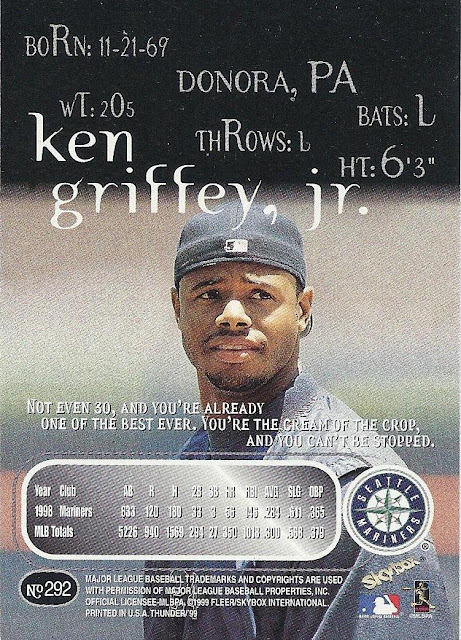 Griffey looks: in the midst of a home run trot

Is this a good Griffey card? Yes.  A ridiculous/awesome set with some cool inserts.

You've seen this set before.  These are the cards with the bizarre hip-hop prose on the backs.  They're a cringe-worthy read, too, like watching Michael Scott (or David Brent, whichever you prefer) awkwardly try to win over a group of black teenagers.

The base design is kind of all-over the place with several randomly interchanging fonts and text running in multiple directions.  The front is Pepto Bismol pink with generic baseball pictures lining the top.  The blurb on the back looks like a haiku (10-12-5 instead of 5-7-5).

It's not a horrible effect, but I love this design for the same reason I love the movie Leprechaun 2.  It's got a silly "what were they thinking" quality to the point of being endearing.

Like 1999 Skybox Molten Metal, this set does that tiered short print thing.  Griffey is in the one-per-pack tier 3, the rarest of the tiers. 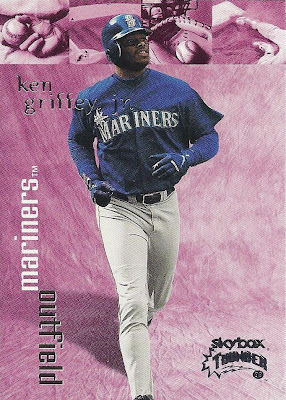 Griffey is in the midst of a home run trot, watching with satisfaction as the ball soars over the right-center wall.  A great shot of the Kid, despite the gaudy background.

Enough of that - check out these phat inserts: 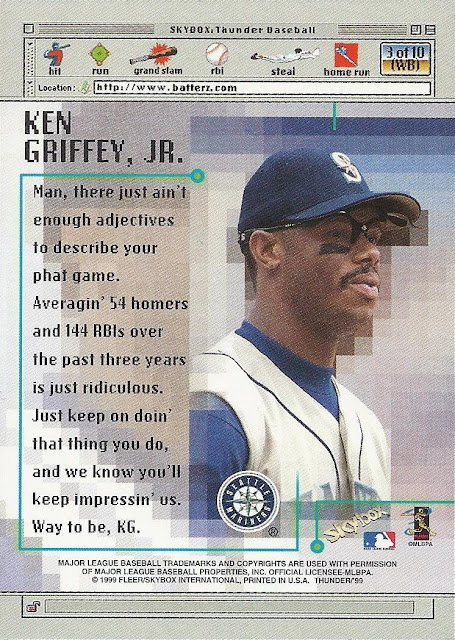 This may be the most recognizeable baseball insert Skybox ever did.  Not only is the design clever and fun, it's hilariously dated.

I don't want you to take "dated" as a bad quality.  I found myself getting a little wistful while perusing the detail in this insert.  I've used a Mac, and I was a Prodigy user way back when.  The design of those interfaces did look mighty similar to this.  Not to mention the card uses the word "phat" unironically.  Yowza.

Still, the background on the front and the pixellation on the back, the icons along the top and the little details around them, the cool foil, the colors, the phatness - I positively love this insert.

By the way, if you go to batterz.com today, GoDaddy asks you to register your domain name there.  Just saving you some time.... 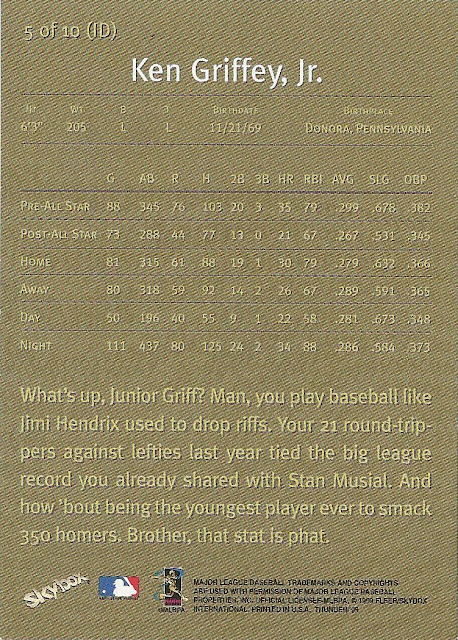 In Depth is another really cool insert.  The design stands the test of time and could very well be produced today to some acclaim.  The front features a cool gravitational field effect on repeating text.  The back takes an in-depth (A-ha....) look at Griffey's stats in day, night, home, away, and before and after the All-Star break.  Great idea, solid execution.

Then you get to the blurb and all Hell breaks loose.  They do give one good peice of information about Griffey's record against left handers, but then they use the word phat again.  Just wow.

In case you don't think Skybox Thunder wasn't pandering enough, they included an insert that looks like a cell phone.  I don't have that one, but I want it.  Bad.  I went ahead and found an image of it for your enjoyment:

Here's all the Griffeys I still don't have for 1999 Skybox Thunder:

I can't complain too much about this set because the inserts re great, and it's just so stupidly appealing.  I may try to acquire a box as I bet the packs were really fun to bust, and I still want to see what the other inserts look like.  Plus the embarassingly indulgent prose on the back of every card is damn entertaining.  In all seriousness, the most appropriate word to describe 1999 Skybox Thunder is phat.  Maybe even phiggity-phat.

Have a blessed day!
Posted by The Junior Junkie at 3:32 PM