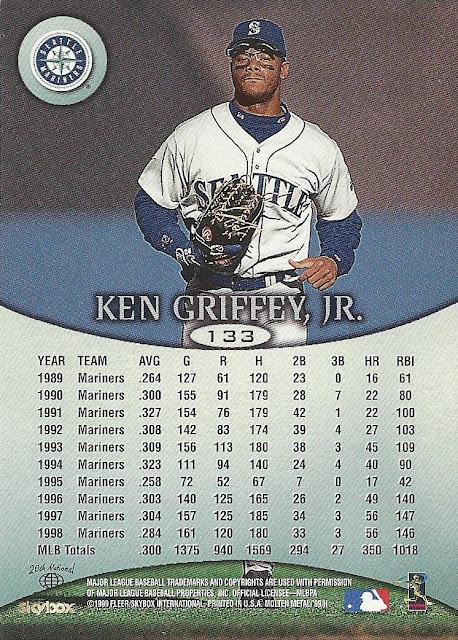 Griffey looks: about to hit something very hard

Is this a good Griffey card? Yes.  While there are no inserts, the parallels are cool.  Plus it's the first year Skybox made baseball cards.

The set: Everyone was really excited when Topps decided to identify their short prints for 2013, but it seems Skybox beat them to it....by 14 years.

The 1999 Skybox Molten Metal base set was divided up into three subsets of various scarcity.  The first 100 cards called "Metal Smiths" are the most prevalent at four per pack, followed by the next 30 "Heavy Metal" cards at one per pack.  Griffey appeared in the rarest subset, "Supernatural," which is the last 20 players of the set at 1:2 packs.

So we ended up with a base set of 150 cards, 50 of which were short-printed for planned scarcity.  Not only that, but it was the 50 biggest names in baseball - the most desireable cards.

I was no longer collecting at this point, and having just picked it up again short prints are still a new concept to me.  Serial numbered insert cards are one thing, but base cards?  That aren't variants?  In my research for this set I was surprised to see they'd been a device for card companies for so long. 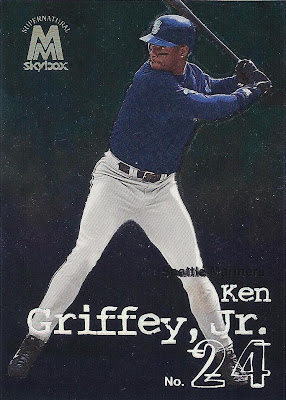 I detect a shift of weight to the left foot here, right arm outstretched slightly to accomodate the cocked left elbow, and the focused stare of someone who's about to hit something very hard..... 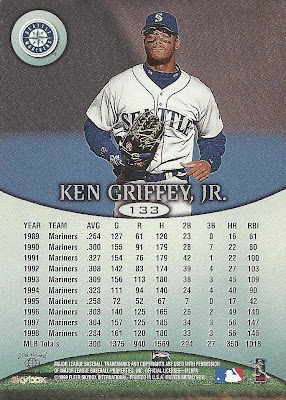 There are no inserts - only parallels.  Here are the Griffeys I am missing from Skybox Molten Metal '99:

Those parallels are really made of metal which, while gimmicky, is also pretty darn cool.  As soon as I can get one, I'll post it here for looking at.
Posted by The Junior Junkie at 11:08 AM