I got a trade package in the mail yesterday from Kevin at The Diamond King.  He sent me so many Griffeys I had never seen you would think I just started collecting.  It's a feeling of immeasurable joy to flip through a stack of Griffeys chanting "need it, need it, need it," but if you're any kind of collector you know what that's like. 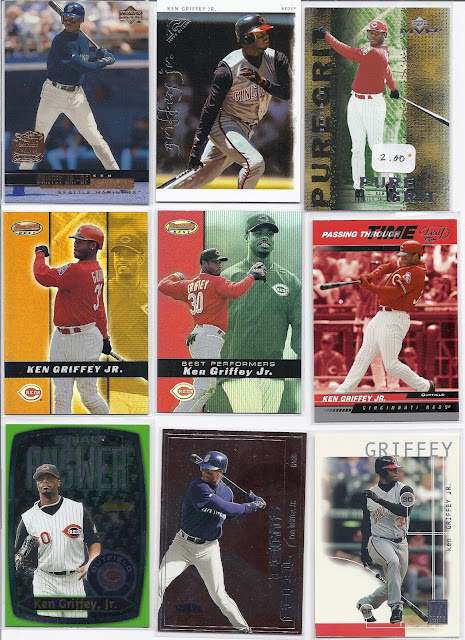 That Leaf Passing Through Time card has a secret: the back contains a reprint of a previous Leaf card, and guess which one they chose? 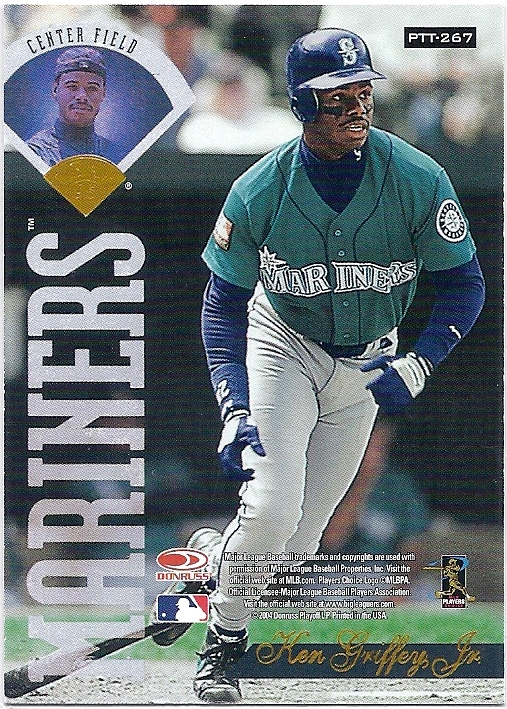 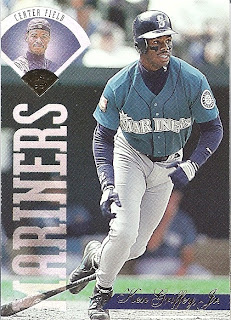 1995 Leaf - only one of my most favorite designs of all time.  There's no foil or holo effect on the reprint, but the colors pop nicely.

I get very excited by reprints of cards that I love but that are considered less iconic on a large scale.  There are plenty of tributes to the '89 Upper Deck rookie and the '52 Topps Mantle, for example, but the '95 Leaf?  Who gives a damn about '95 Leaf?  Me, that's who.  Excellent choice.

This is the the strangest thing I pulled from Kevin's trade stack.  It appears to be a phone card but there's nothing about it being a phone card anywhere on the card.  I won't go into too much detail as this will likely be the star of an upcoming "Oddball" post.  If you have information on it, give me a shout.

﻿Thanks, Kevin!  This was a truly awesome stack.  I have a solid selection of steroid-using douchecanoes coming your way for the SCAM project.  There's some rookies, serial-numbered cards, inserts, oddballs, all that.  Look for those next week.

And everyone else, go round up any cards that you used to love but now may be a little bitter about due to the recent unpleasantness in MLB and send them to Kevin.
Posted by The Junior Junkie at 10:29 AM