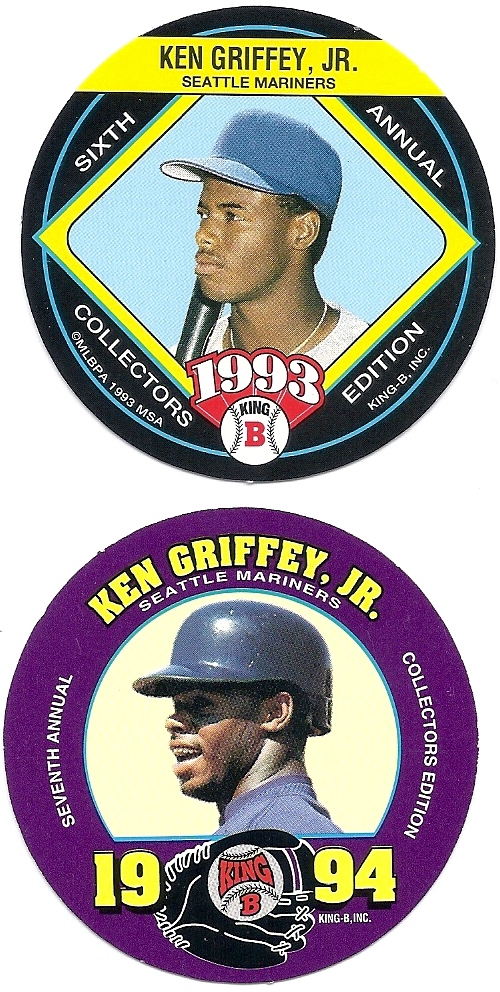 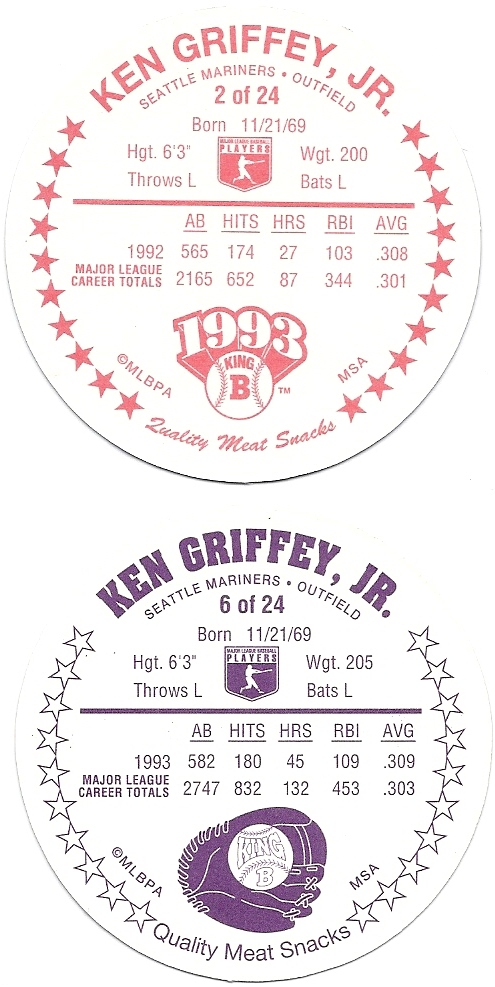 Is this a good Griffey card? Yes.  Unique and extremely collectable, round cards are obviously the future.

The set: King-B Beef Jerky Company put out a set of round baseball cards from 1988 through 2002.  Griffey had cards in those sets from 1990 to 1996.  That's 7 years of round Griffey cards.  Two of those years are represented in my collection.

The cards were manufactured by Michael Schechter Associates who also made cards of similar roundness for Oscar Mayer in 1994.  The Oscar Mayer cards could be flipped up into a standee.  I don't have said card, so forget I said anything.

This King B cards are very much oddballs, but I feel they are prolific enough a set to merit their own post.

I mean come on, doesn't this look good?

﻿
﻿
Peppered is good.  I like teriyaki better, but sweet & hot is my absolute favorite when available.  Pemmican makes a really good one, but it seems Jack Links is taking over everything now.  This is exactly what happened to King B.

The cards came in canister packages of beef sticks, so this bag is not an appropriate picture for this post.  I do prefer this type of jerky, though.  My blog, my rules.

So, round baseball cards, huh?  Remember that Simpsons episode where they put Bart into the remedial class and the teacher says, "Everyone grab a safety pencil and a circle of paper."  And there's that kid who "starts fires" and the other who "has mittens pinned to his shirt all year long?"  Man, that was a good one.

Anyway, these are the perfect cards for those kids.  Even as a reasonably intelligent adult, have you ever shuffled a bunch of Topps Tek cards too quickly?  Those corners hurt.  Plus there's 4.15" less of potentially damageable edge not to mention four fewer corners to "ding." 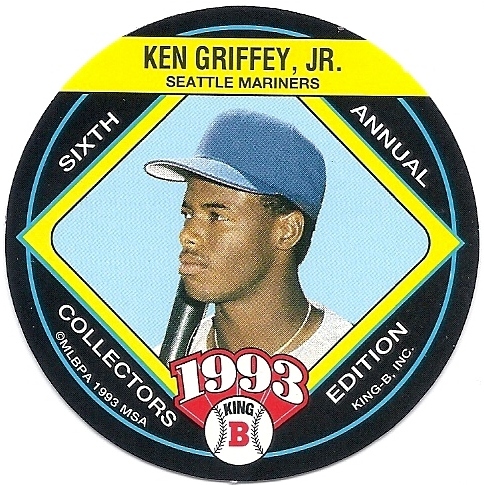 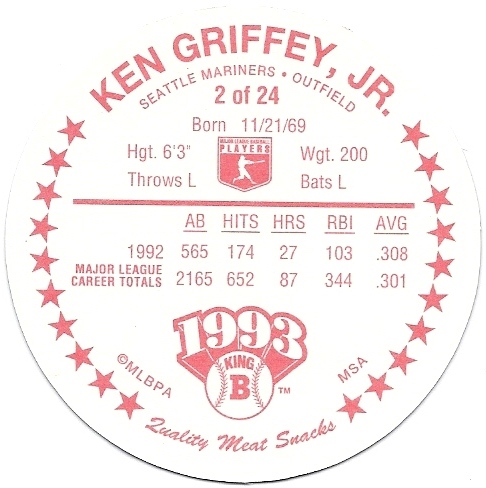 Griffey is staring off pensively, meditatively.  Perhaps he is experiencing one of those moments when your mind slips the reigns of the now and plunges the depths of infinity, ensnaring your spirit in existential crisis both exhilarating and terrifying.  Also, he looks like a pog. 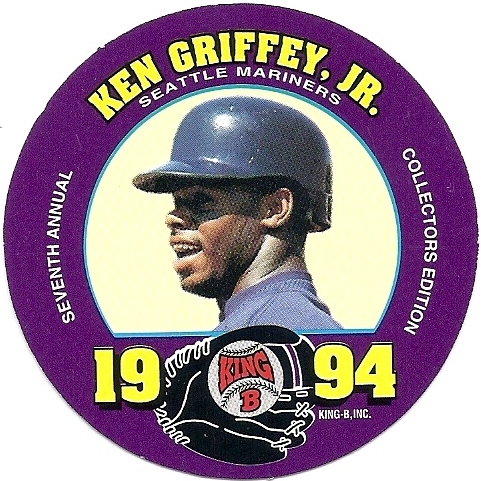 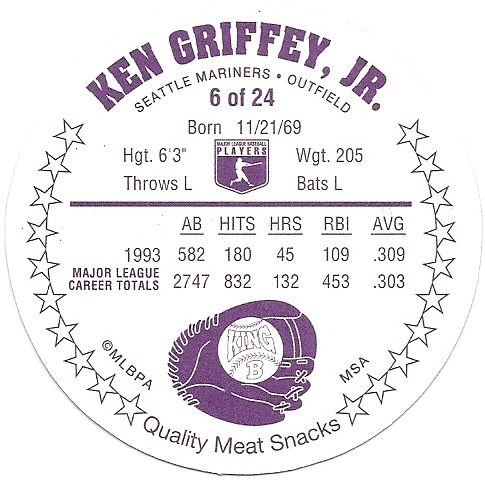 This one's a little more light-hearted.  The purple carries over to the back and you've got the updated glove logo.  Also the diamond-in-circle design of the '93 set hurts my eyes, so I like this a lot better.

The only real complaint I have with the King-B Jerky cards is that they gave up on Junior after 1996.  Why?  He was coming off his injury and putting up some really solid numbers.  Instead they went with likes of Jeff Montgomery, Al Martin, and Matt Mieske.  The only Seattle Mariner in the set?  Dan Wilson.

Don't get me wrong, I love Dan Wilson and have a pretty extensive PC of him, but does he better represent meat products?  I would think if you had to pick another Mariner to represent meat snacks it would be Randy Johnson.  I'm not sure why, he just seems like a salted meat kinda guy.

Have you noticed that there are not enough round cards out there?  I've only ever seen these, the Oscar Mayer ones, and 2003 Upper Deck Standing O Die-Cuts (which look great).  There are a lot of potential designs that suit the circle layout nicely.  I shouldn't mention specifics here as I may someday start my own brand, but think about all the sports that use a round ball or puck.  Ooh, and cards shaped like little footballs.

I've already said too much.

Here are the five years of King B Griffeys I am missing: