The longer I collect cards, the more I love 1991 Studio.  The logo, the layout, even that ugly mauve border on every card totally do it for me.  I am just bananas about them. 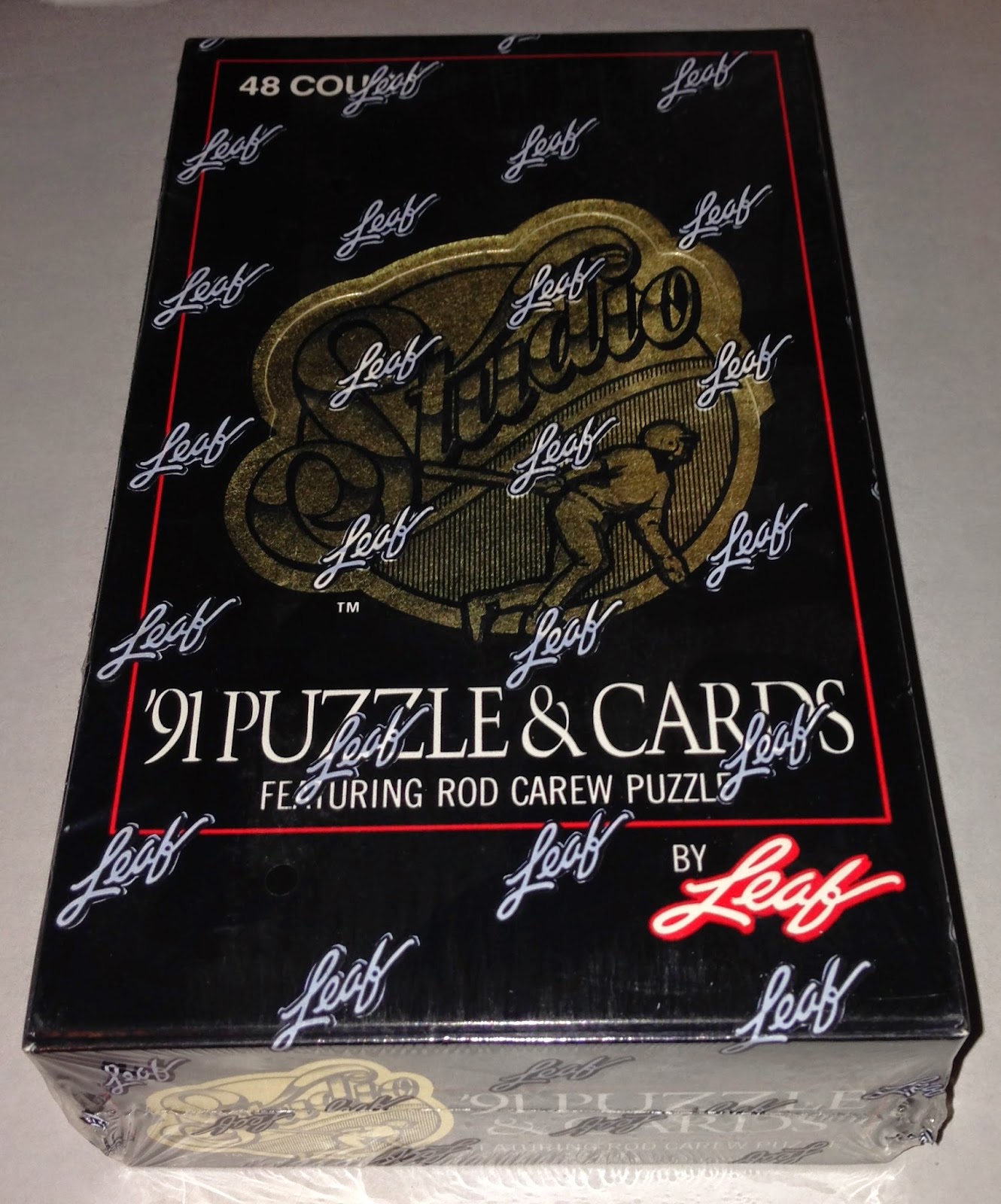 So bananas, in fact, that I bought a whole bunch (pun intended).  I picked up a sealed box of the stuff, and I'm going for the set!

Before we go into the cards themselves, I just have to mention that it's amazing that this product even got made.  In what world does a company put out a set like Studio in the same year as this: 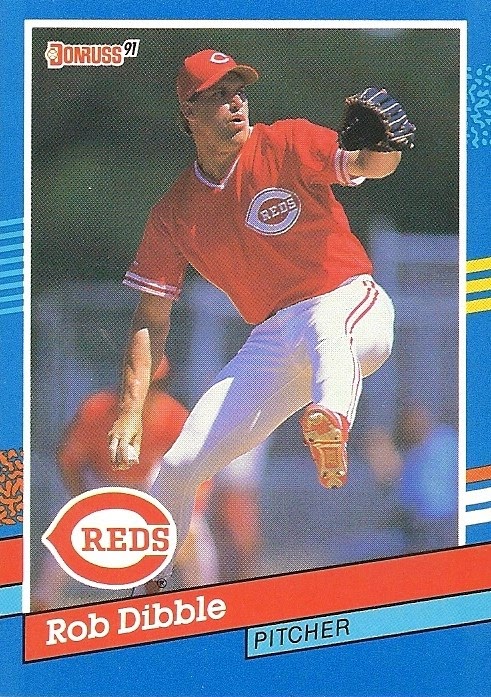 Compared with other flagship brands, particularly one as unspectacular as '91 Donruss, Studio must have been about as alien to collectors as a UFO landing.  I'm guessing somebody had a moment in the Donruss pitch meeting and lightning just struck.  Somehow the damn thing got made, and the result is this bizarrely wonderful set of cards.

My own appreciation for this set probably comes from a deep, abiding love for this card: 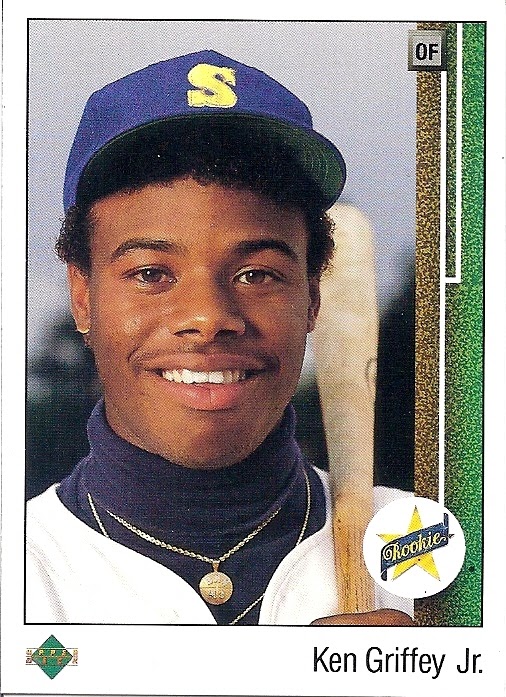 You've seen this card.  Heck, your Mom has probably seen this card.  It had collectors chasing it from the moment it hit the market 25 years ago.  Even now it remains one of the most iconic collector cards ever made.  So what's the big deal?  First year of Upper Deck, yeah.  Card #1, okay.  Son of an all-star, absolutely.

Now how about that picture? That up-close and personal portrait of the fresh-faced young star, impeccably photographed and framed?  Portraits had been done before but not like this.  It's intimate, full of personality, and larger-than-life.  Oh, and it's not blurry, an important difference considering the quality of the photography that was adorning some sets around this time.

Donruss took that aspect of a great card and built a set around it.  They even expounded on it by bringing it quite literally into the studio and giving us a real, unfiltered look at the players in stark black & white.  It was the age of Glamour Shots, after all.  They probably had those fancy lighted umbrellas and everything.

The best part about this set is that these are not Hollister models or Hollywood actors - they're ballplayers.  And not just stars, either.  Most of these guys were barely recognizable on your old standard-definition cathode ray tube television in the 90's.  So we ended up with a set of portraits with dozens of big names and Joe Schmos alike that run the gamut from hilarious to heroic.  It's a very fun, often stirring set.

Enough talk - is everybody mentally and emotionally prepared to see what your childhood baseball heroes really look like?

We'll start off easy with the guys who clearly "got it," the cards that this set was made for: 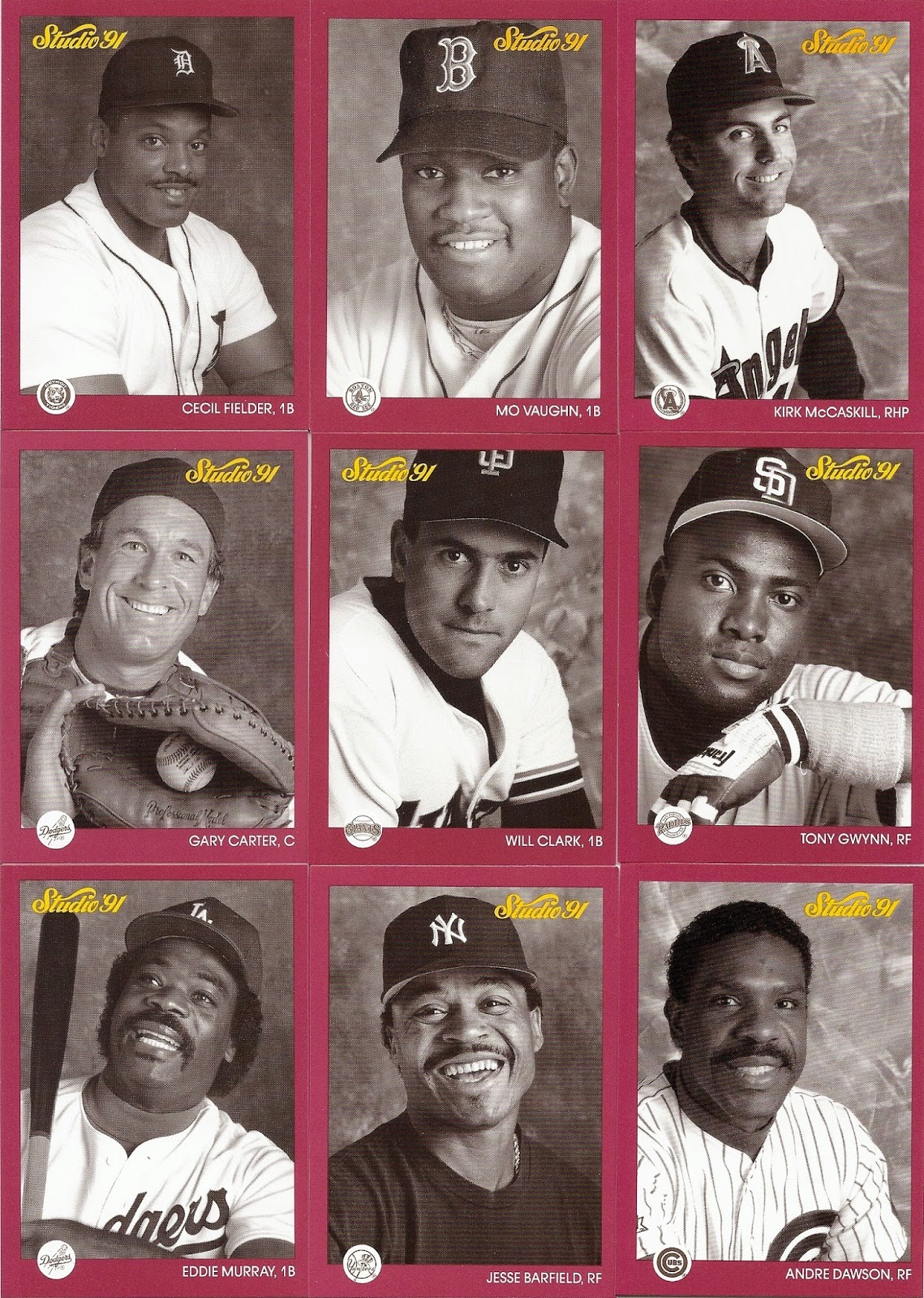 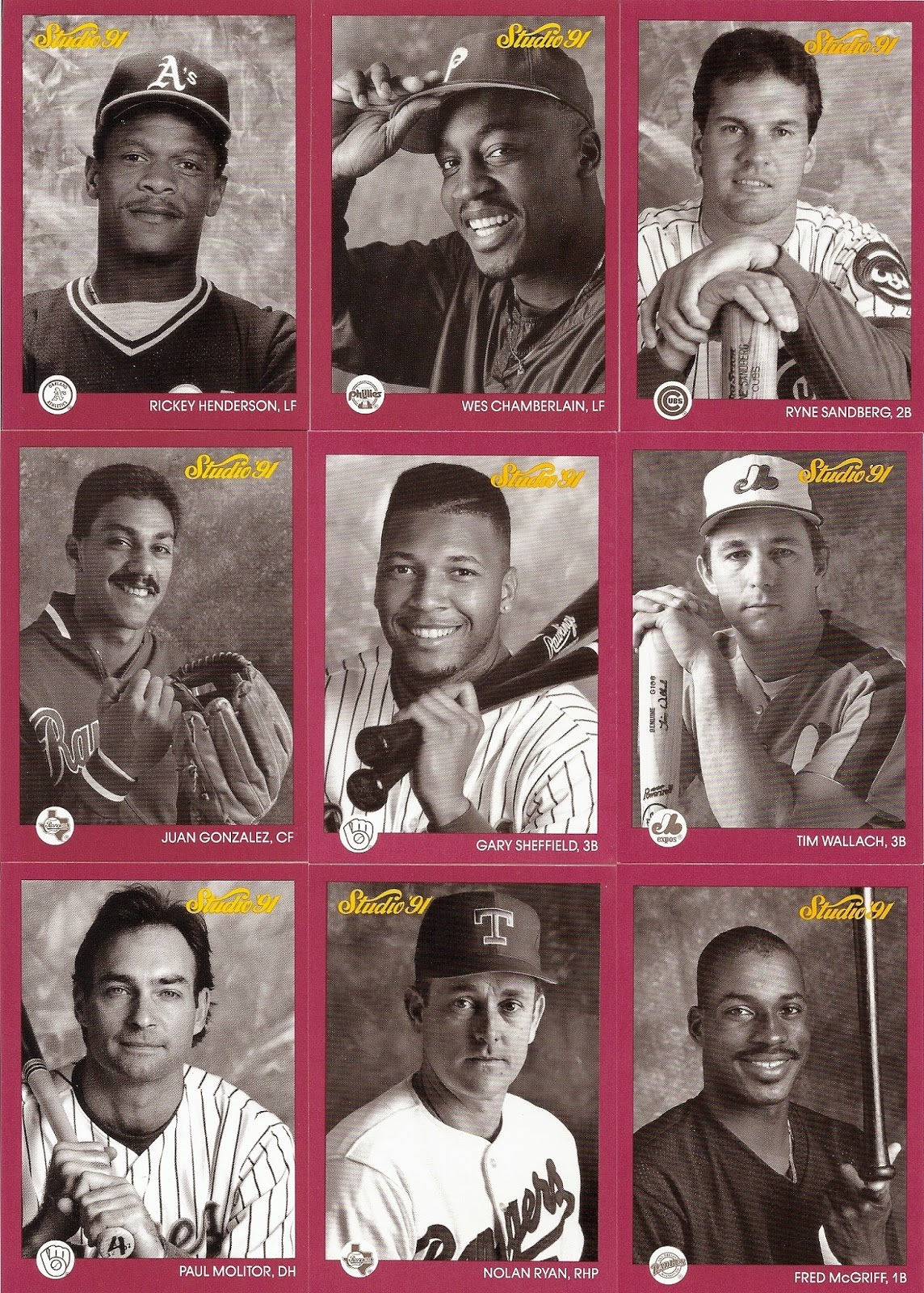 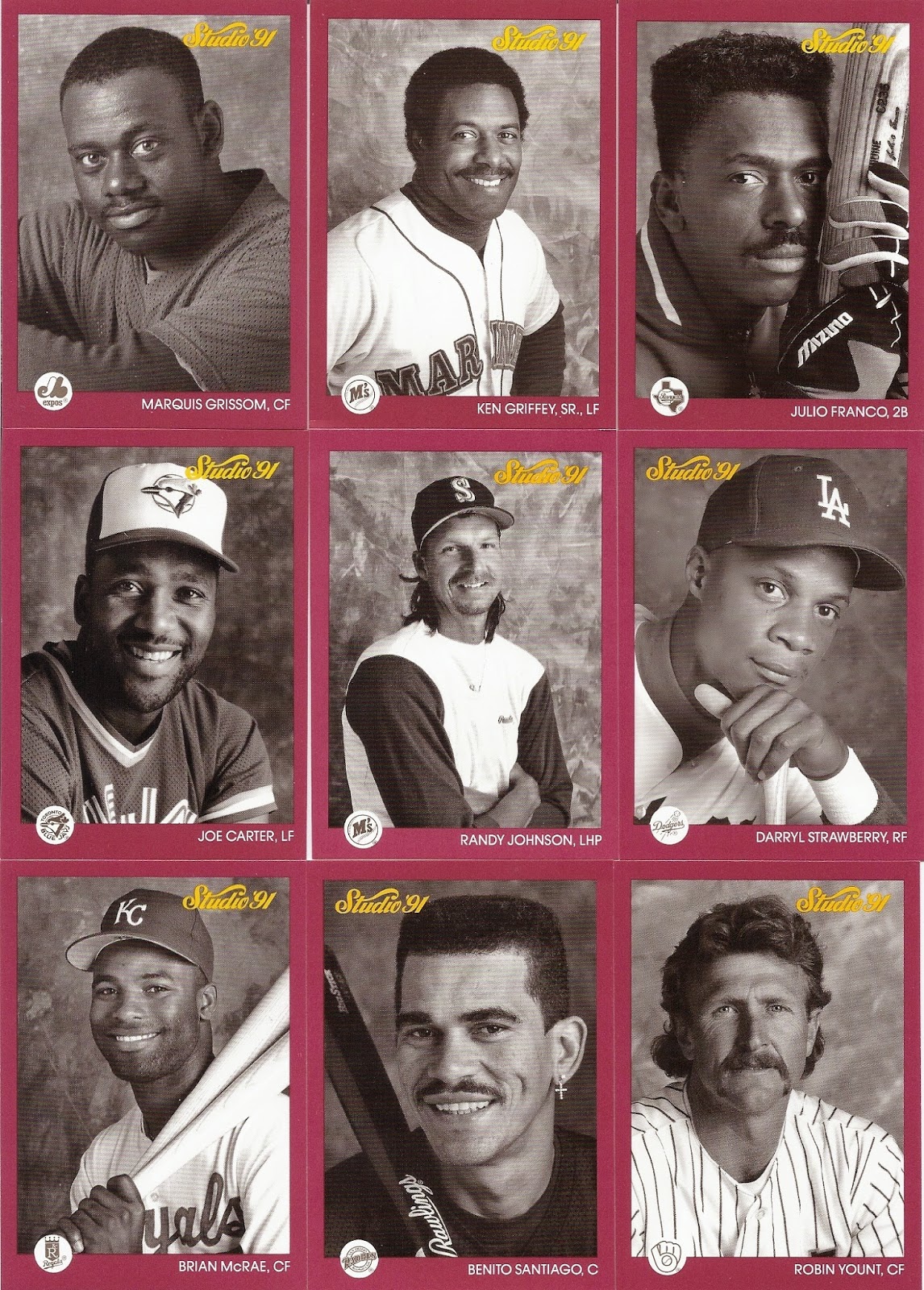 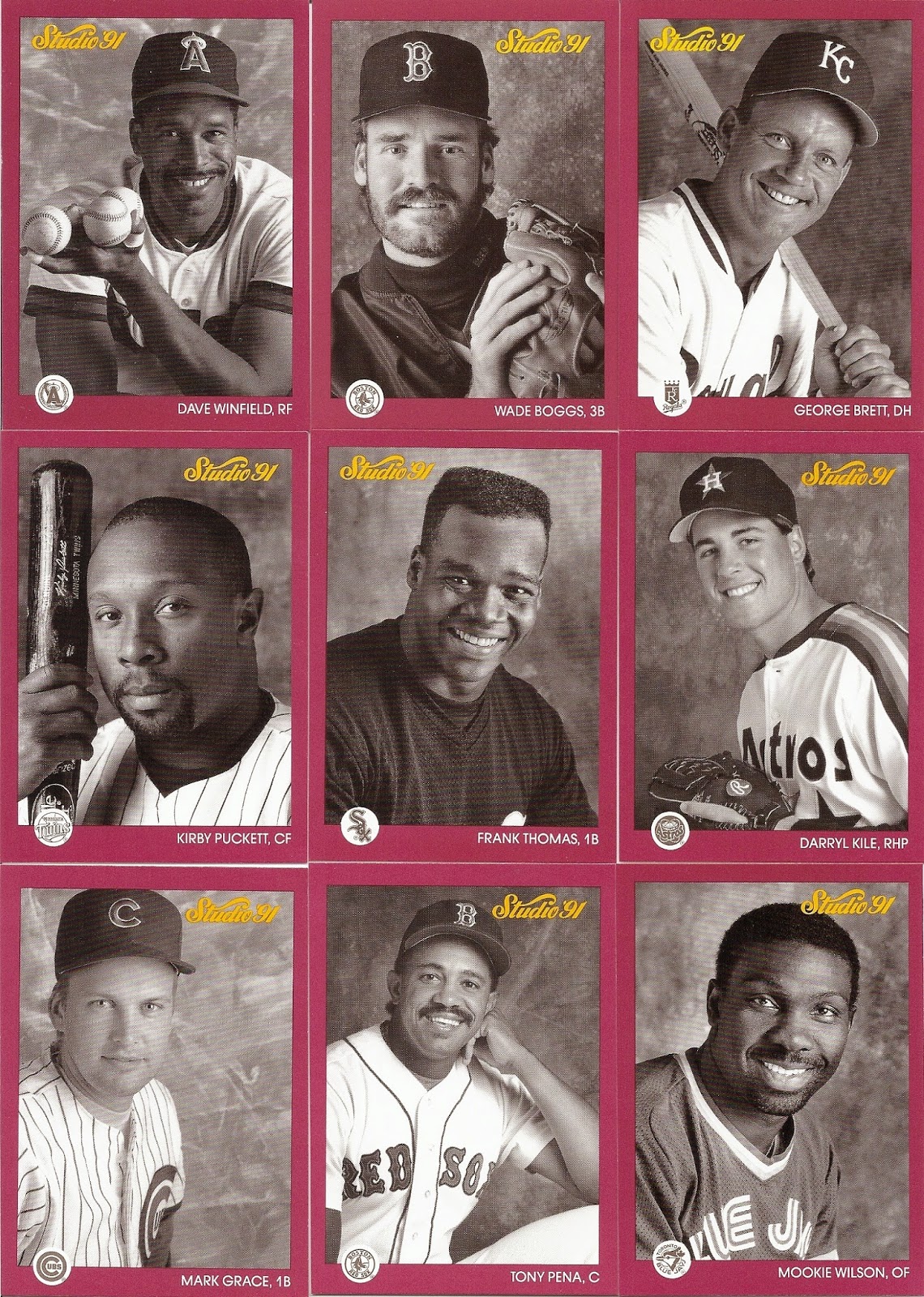 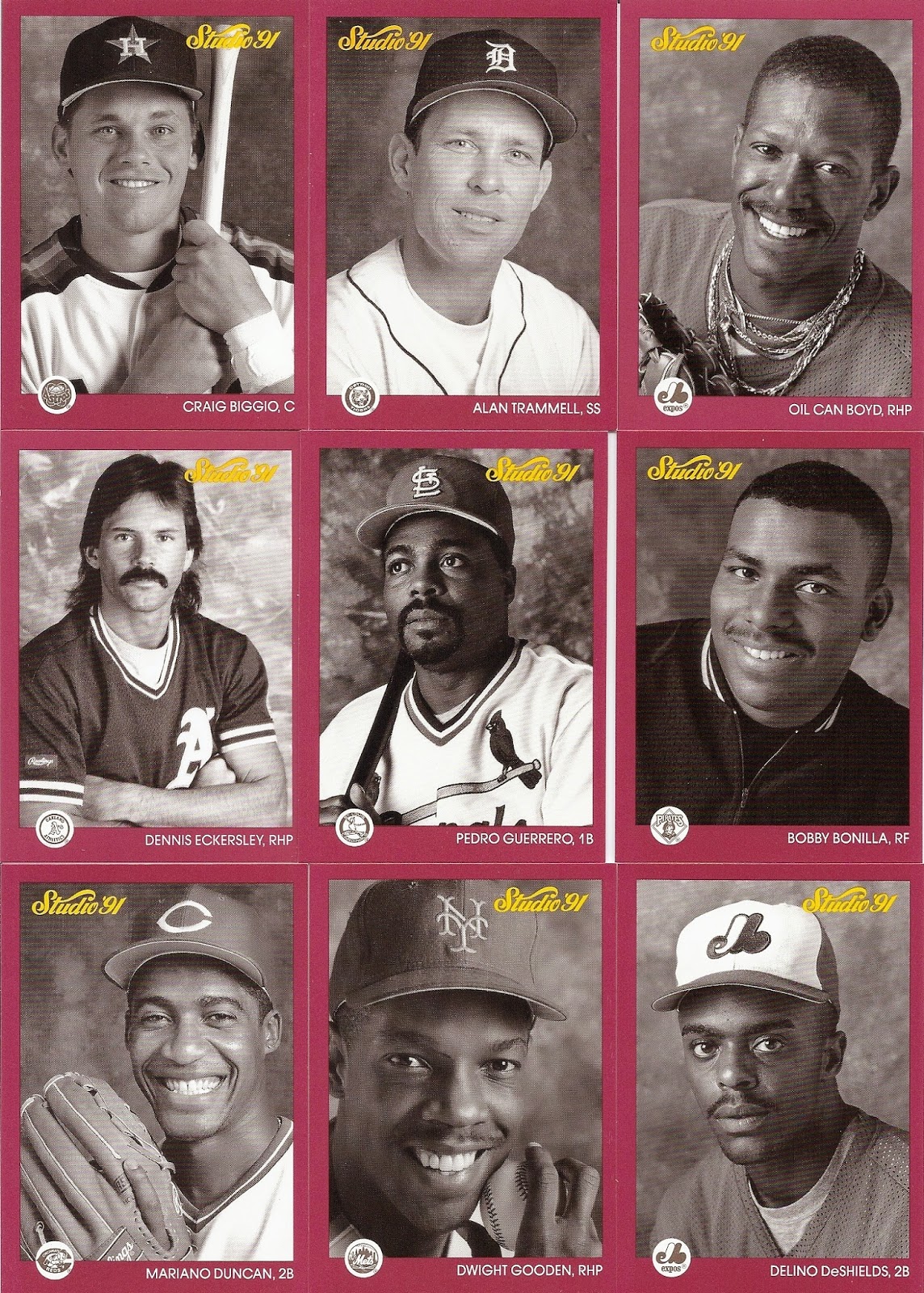 These exemplify what I believe they were going for with the Studio set.  They're not stealing a base or raising a knee in a wind-up, swinging a bat or leaping up a wall.  It's just them.  This is probably how their families see them - I love that.  Just dudes, bro.  Just dudes.

Then again, not everybody's portrait turned out as good as those.


Those cards were fun, but some guys showed up with no intention of having fun.  These homies mean business.  Reckonize: 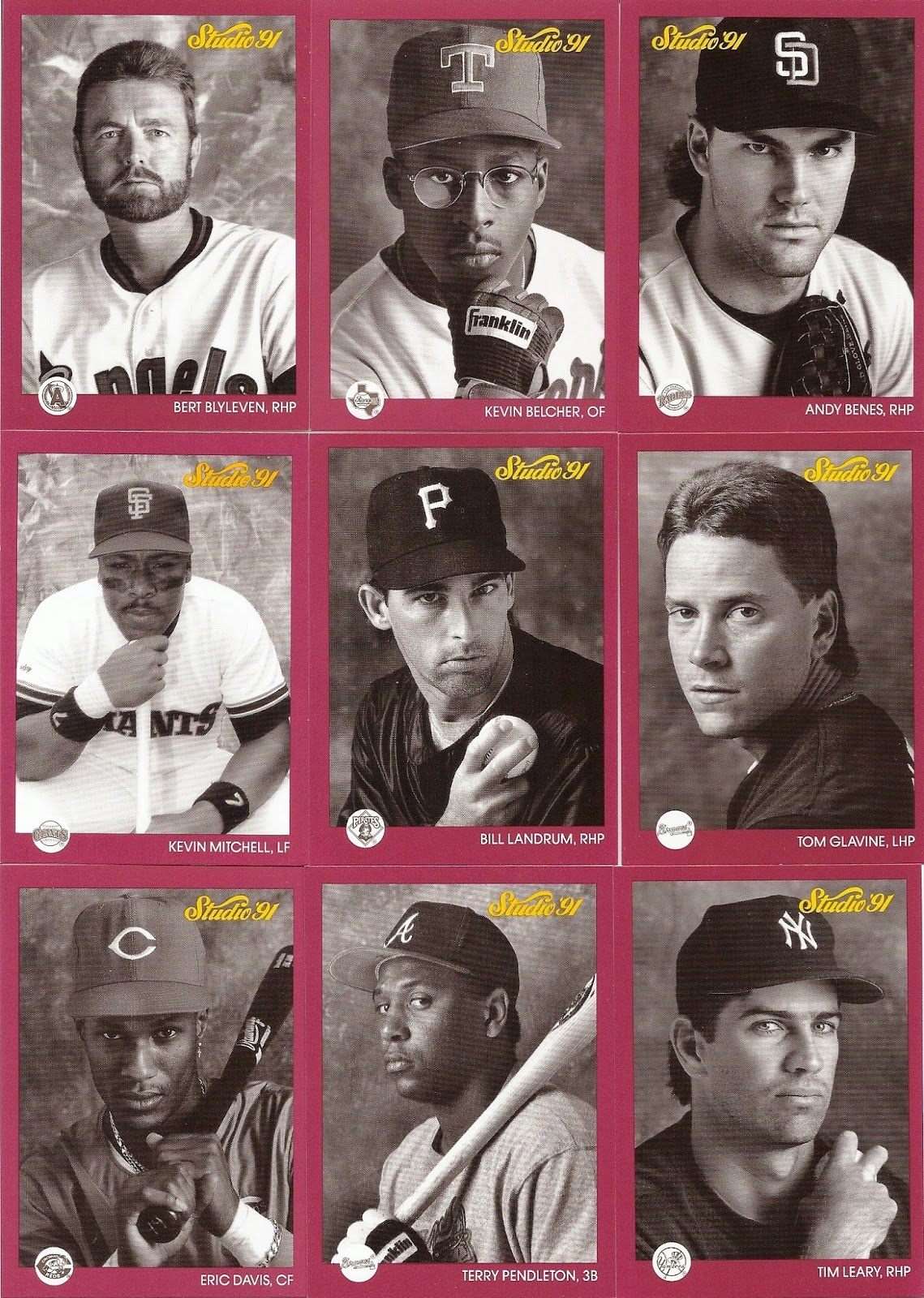 Shitting your pants yet?  I know I am.  But don't change them tighty-whiteys yet... Remember that sleep you were planning on having tonight?  Well you can forget it.  Visions of Gregg Olson have been dancing my head for weeks. 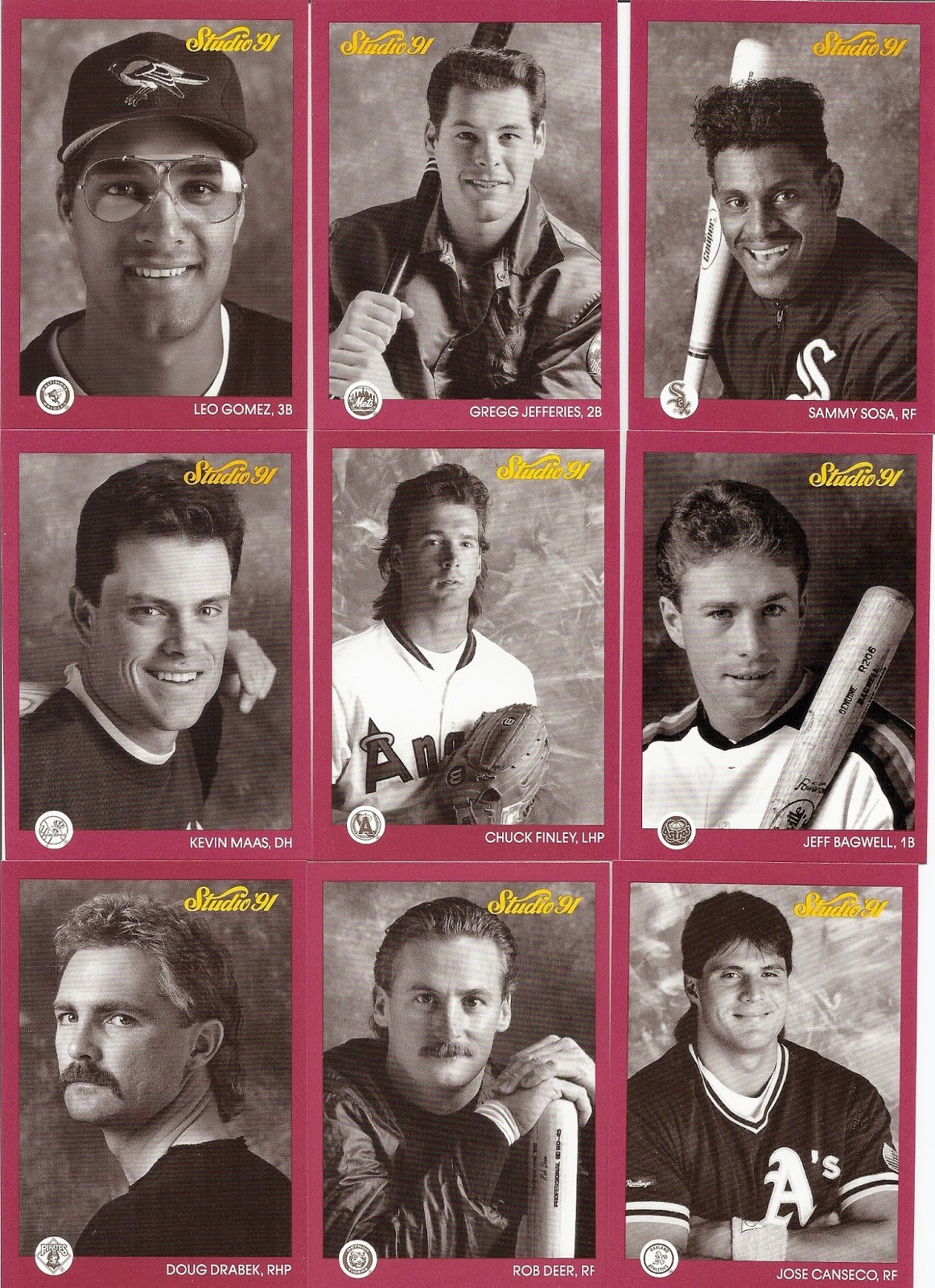 Here are some guys who like to have fun.  Gregg Jefferies is all Bobby Teenager captain of the football squad going to ask Sally to the big dance.  And Sammy's all like........actually I don't know what the hell Sammy's deal is.  And this is allegedly before he went insane with steroids and skin treatments.  Yikes.  At least Leo Gomez is there with his comforting grandpa glasses.

Now just when you thought it was safe to look at Studio cards again comes ZOMBIE STEVE FINLEY!


Apologies to Finley fans (I know he's got a bunch out there), but this is far and away the scariest card in the set.  Maybe it's the lighting, the sunken eyes, or the stubble, but you can see: there's menace behind that smile.

Now I know we already saw this one, but it needs another look: 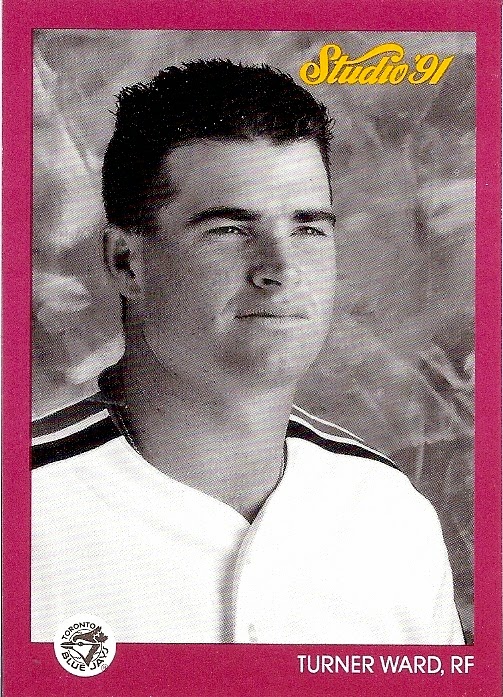 Somewhere between the thousand-yard stare and the classic dumb guy glossing-over is Turner Ward and this inimitable facial expression.  I've literally sat in a room with people and tried to make this look happen - it cannot be done.  Turner has a special set of muscles that allows him to resemble a very peaceful potted fern.

Perhaps a towel could have helped.


There had to have been a towel guy on-set.  There's no way all these guys were leaving the house thinking, "Okay - wallet, keys, giant cellphone.  Hmm - what am I forgetting?  Ah, towel.  Check." 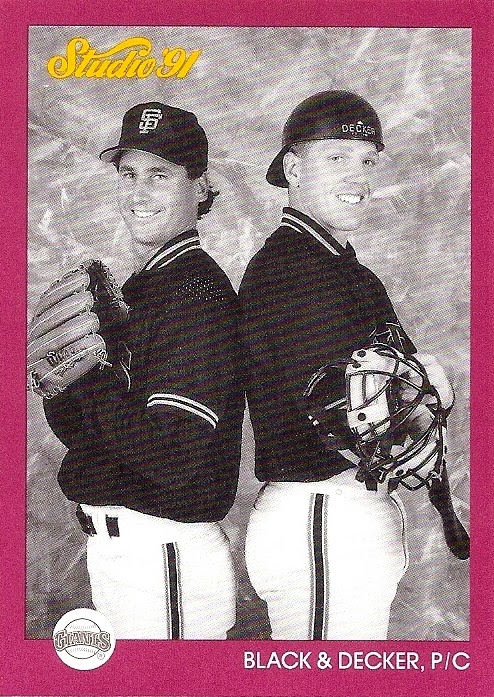 The last card in the set before the checklists, this one of Bud Black and Steve Decker is an anomaly and bears scanning.  I'd like to have seen more of these from Studio.  Think about the great group shots that might have been.  One extremely obvious one leaps to mind.... 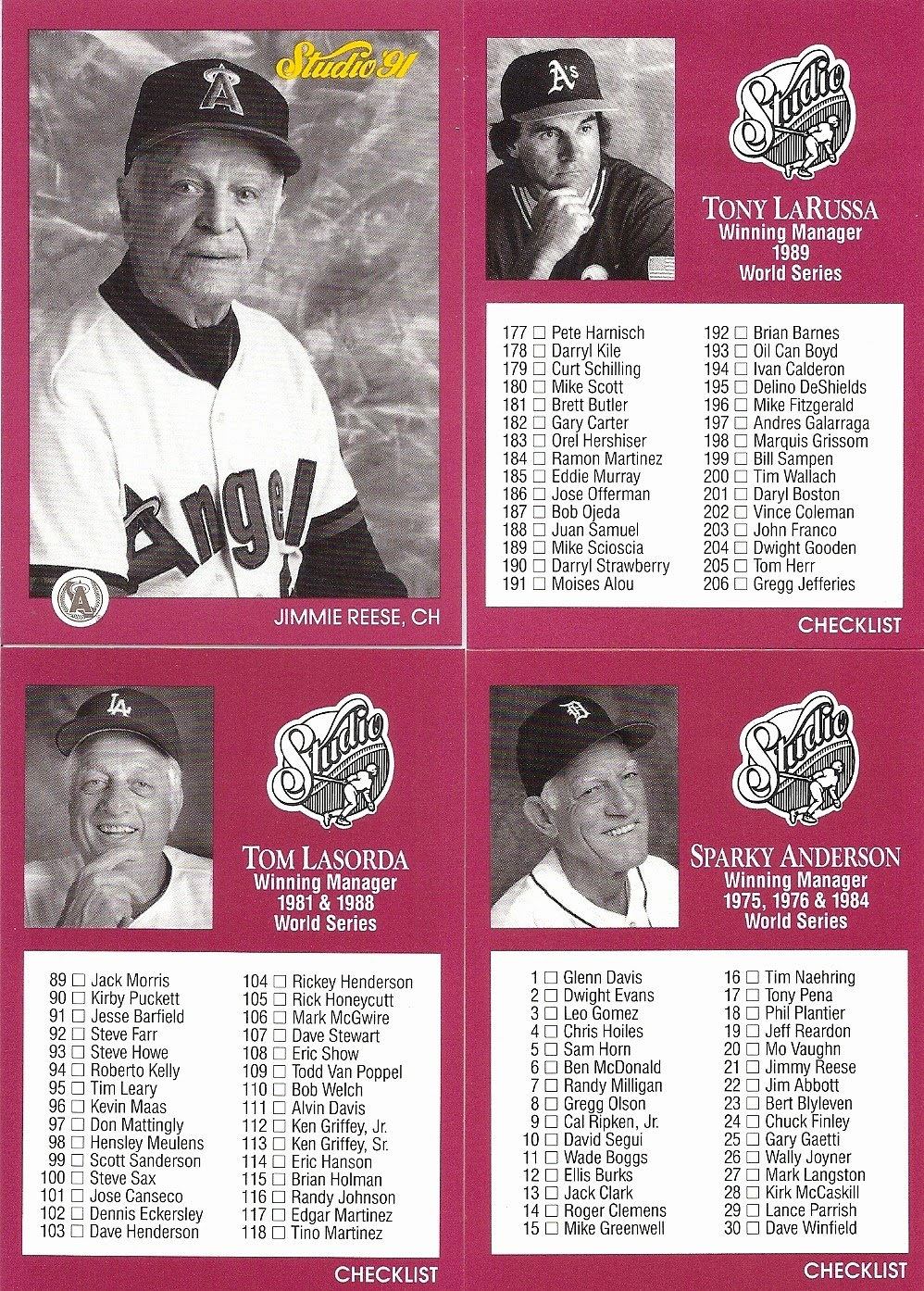 Even the managers got in on the fun but were relegated to the checklists except for Jimmie Reese who got his own well-deserved card.  That is by far the smiliest I've ever seen Sparky Anderson.

That's it for the set.  Four-card previews of the Studio set were available in factory sets of 1991 Donruss.  There's a little gold sticker on the plastic wrap to advertise this fact.  Take a look: 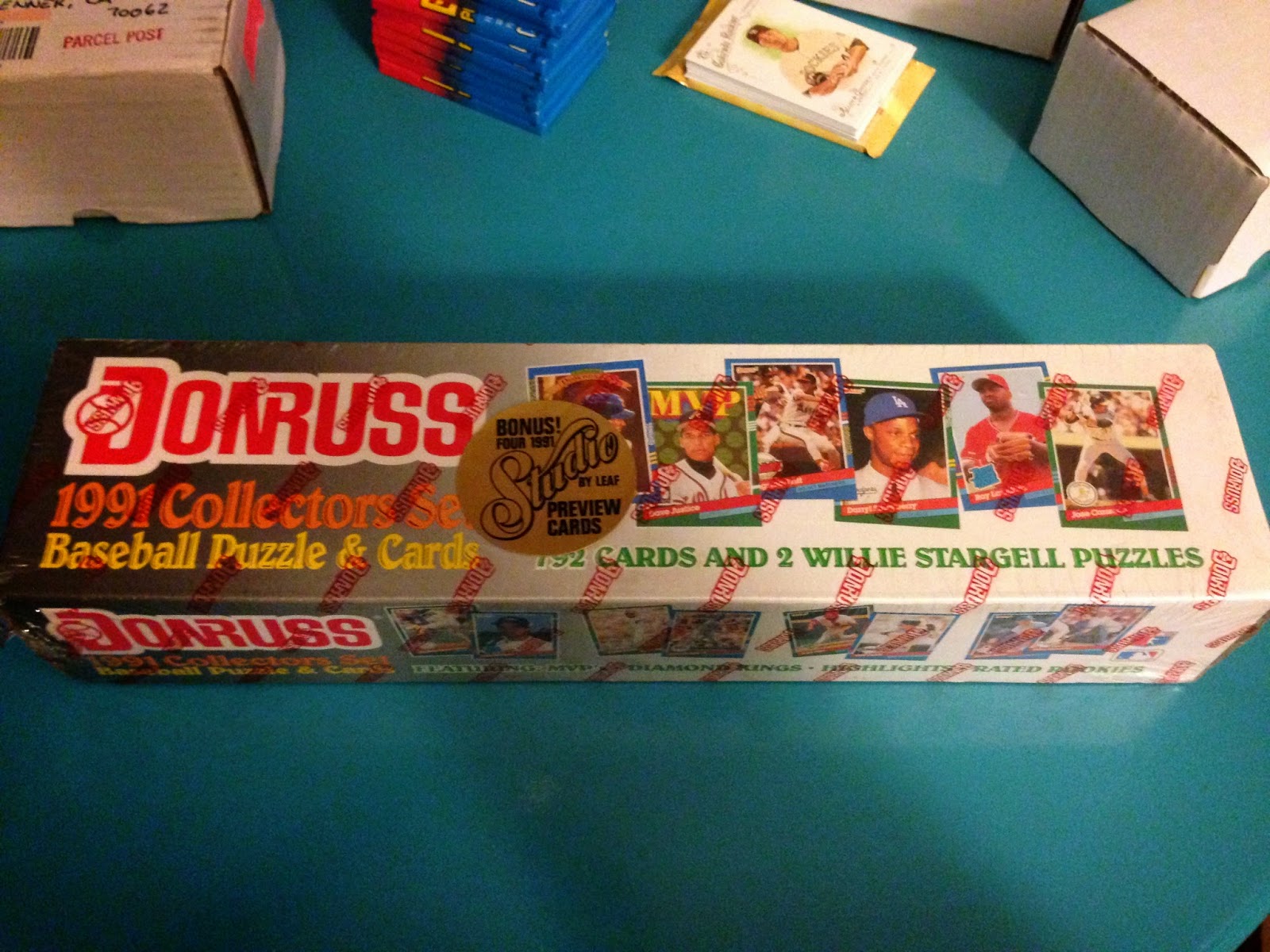 Of course they don't tell you two important facts.  First, one of the four cards is a "cover" card of sorts that has no player on it - just a description of what the Studio set is.  This should be good:


Oh, that's actually pretty apt.  I mean the limited quantities thing is a joke as sealed boxes of this brand are less than ten bucks 23 years later, but the description isn't inaccurate.  Sweet punctuation error in the second sentence, and I really like how it says "you now possess" like they're freaking Gutenberg Bibles.

Anyway, the second thing they don't tell you is that you get four (three, really) cards with each Factory Donruss set, but there are 17 in the preview set.  Imagine the guy back in '91 shelling out hundreds for sealed sets only to break the seals to get all 17 preview cards.  I didn't realize this fact when I bought that box for ten bucks at a card show.  I mean, why 17?  That's just mean.

Anyhoo, I just bought all of them on eBay for around six bucks, so that quest is complete.  Moving on... 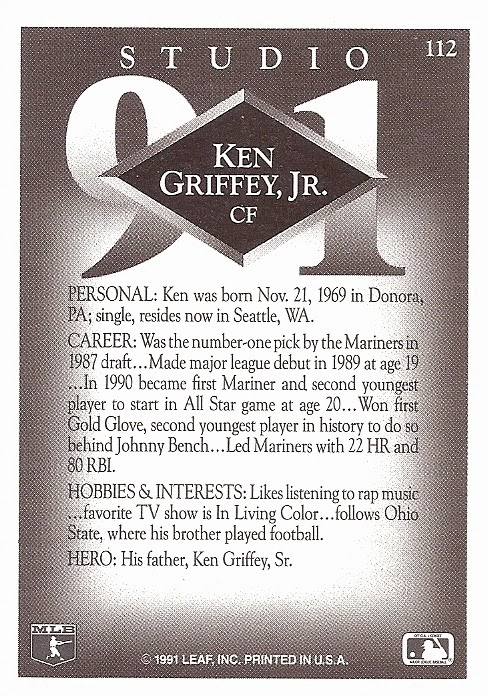 Griffey's picture says to me that he showed up to the "Studio" and a guy in a beret told him, "Just be yourself," and Junior, being an upstart youngster, just looked at the camera like a goon, snap snap snap, and then he got the hell out of there, probably in a Ferrari.  With so many Griffey cards being light-hearted and full of smiles, this is a very real, gritty look at the Kid.  It's very humanizing.  Plus if Junior is ever having beers at my house I now know to put on some 90's rap.  I'm thinking Bone Thugs-N-Harmony.  The Kid seems like an E 1999 Eternal kind of guy.

As for that box I broke in the beginning of this post?

I ended up 35 cards short of the 263-card set, a hair below 87% completion.  As of this post I have acquired all but seven base cards:

If one of these cards comes in the mail and the picture is hilarious, I'm going to kick myself for having already put up this post.

That was a long one, but we got through it.  Thanks for reading.  I'm going to leave you with three of my favorite cards from 1991 Studio.  Enjoy: