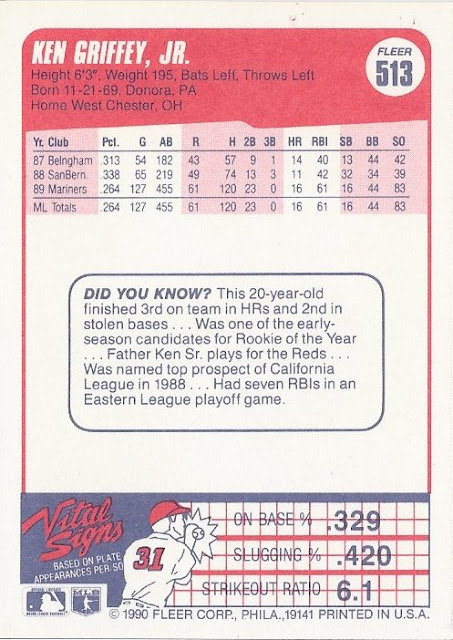 In my collection: 14 regular, zero Canadian (and a sad panda that is), 1 Box Bottom

Is this a good Griffey card?: Yes.

The set: Fleer had a lot of inserts in 1990, guys.  I'm giving those their own post the same way I did all those other Donruss rookies.

Anyway, a picture is worth a whole lot of my words.  Here's eighteen:


The Bob Kipper is autographed "To Jon."  I don't know where I got this, but Bob did a really cool thing with his card.  Check out the back:

This set was divided up by team based on their 1989 performances, then alphabetical by player name.  Names are printed on banners that ring the photo.  A simple, attractive look printed on bright white cardboard.


Where in 1989 the "All Star Break" figures appeared, this year the backs all have "Vital Signs" that differ in category by position and give key stats.  Where there is room and something to say, Fleer includes a "Did You Know" box of interesting facts.

There is a Canadian version of the entire set, but there is not enough difference that I can justify waiting to get one before writing this post.  The back says "Made in Canada" or something like that, with no cool French words or prolific use of the metric system.  It's practically the same card.  When I get one, I will post some nice scans of the back just for you, Big Guy.

1990 Fleer was extremely overproduced and can probably ring the Earth several times.  The inserts and subsets are cool and groundbreaking (and a slippery slope that turned out to be).

Look!  It's the Players of the Decade subset:


And one of the coolest cards of 1990, Behold! the League Standouts Insert: 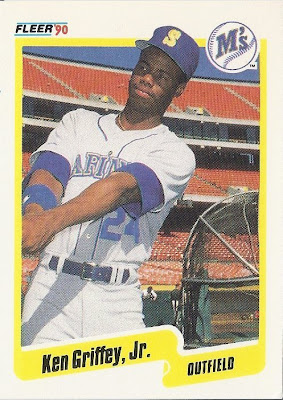 After a long day of practice in what is obviously not the Kingdome, and then of being pestered by photographers to take yet another baseball card photo, Griffey seems to be restlessly remaining still for this picture.  Brow slightly furrowed, going through the motions, it seems like he just wants to get out of there and smash some records.

Fleer put cards on the bottoms of the boxes of wax packs.  Here's our guy: 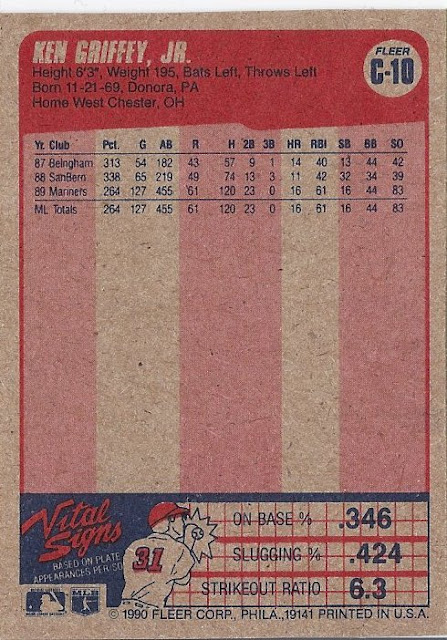 Not the lovely white virgin cardboard we are used to.  Here's a comparison: 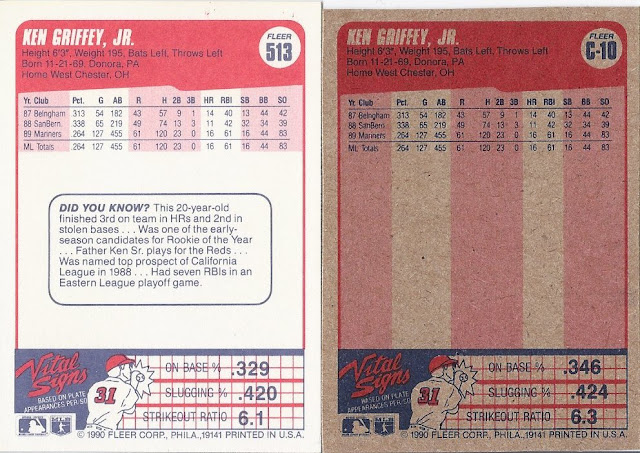 The boxes must have been printed long before the cards were.  Junior's Vital Stats took a dip following an injury.  Hey, those things are useful after all. 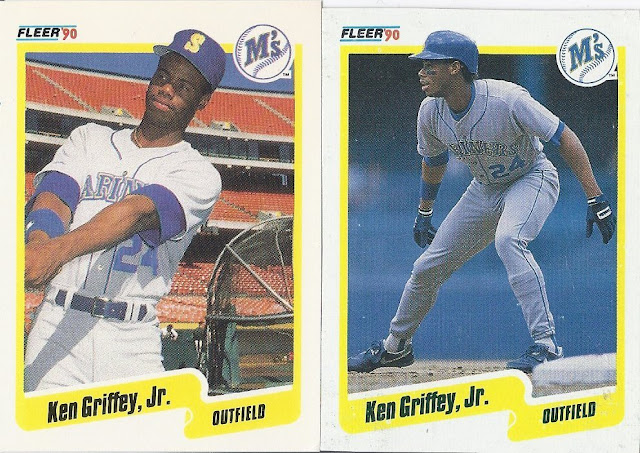 Coming soon: all those great Griffey inserts from 1990 Fleer.  See you then!
Posted by The Junior Junkie at 11:41 PM