Sorry I haven't posted a new Griffey in a couple of days, but I have been putting together trade packages for a few fellow bloggers.  In doing so I am consolidating all the cards I have no intention of keeping into team piles.  They're getting kind of big and heavy, and I'm not sure what the best way to ship them is.... do baseball cards count as media mail?

Anyway, I have come across numerous cards I didn't even know I had.  Most of them I just chunked into the appropriate team pile or blogger trade stack ("chunked" may sound bad - let's say "gingerly placed"), but a few I kept for my own binders.  Here's just a handful from last night:


I already have so many Nolan Ryan's I don't know what to do with myself.  Then I came across these 9 in a row (actually a few more of those were dups, so it was more like 12 in a row).  Some cool older ones, but the guy played for so long, none of these approach what you would call an "early" card.


YES!  I cannot tell you how long I've been on the hunt for a Rollie showcasing the Rollie-stache.  It's so iconic you can't even make fun of it.

But you know why I really wanted one?  Hipster friends.  The fancy mustache is back, and I know a bunch of people rocking them.  I always reference Rollie Fingers and they're like "Whaaaa?"  Drives me nuts.

I'm putting this one in a top loader and keeping it in my glove compartment so I can whip it out at parties and get all in their face with "Rollie did it first!  Boom.  Try getting your ERA under 3.00 and we'll talk.  Now get me a beer, doofus."


This Doc stopped me because of that bottom left corner.  Don't get excited - I flipped it and the back is solid cardboard brown.  This was the back of a box.

I think Tony was born in that Padres uniform.  One of the bloggers I'm trading with loves the Padres and Tony Gwynn, so I'm sending him a bunch, but these and a handful of other Gwynn's from my childhood are for the binders.  Those Topps All-star cards with the bright primary colors always did it for me.....


Show me a bad picture of Rickey.  I double-dog-dare you.  He's the "Really Photogenic Base-runner."


A 4th-year Ryno and a rookie Straw.  I recently bought a Ryno RC in the 'bay for my uncle for Christmas.  This one is not nearly as cool.  Look at that amazing picture, though.  And check out how fresh-faced the Straw is.  Makes me wanna call him Darryl....

I love rookies.  I found 5 of that Belle and 3 of the Sosa and Greenwell, plus dups for Jim Abbot and Sheffield.  I bindered that Sele because he got that one HOF vote, and I'm proud of him....


Local boys all.  That Tulane card is sponsored by Maison Blanche (if you know about that, then God bless you), Big Ben ended up pitching for the Orioles, and Chuck went to high school with my Aunt.


I was thinking the other day how I had no Vida Blue cards.  Turned out I had two.  Better keep these for posterity.

Let's face it, K-mart makes Walmart look like Target, but these are super glossy and I love strange-branded cards.

You know the K-mart nearest my house has a sports card section made up of a little more than 50% hockey cards?  Hockey.  Stacks and stacks.  In New Orleans.  I don't think you could give those away here.  Geniuses running that place....

I come across so many Fernanado Valenzuela cards, and I keep very few.  The guy had a long, distinguished career, though, and deserves a page in the binders.  Also a sweet 2nd-year Tino in the Mariners' heyday.

These appear to be signed - I don't know how or why.  There's no proof or COA (not that a COA is proof these days), but I can't imagine someone trying to fake this guy's autograph.  So, I kept them.

Somewhere there is a Giants fan who loves this guy and has a cute nickname for him and everything, and he is going to go nuts for these cards.

And this is where I'll get my signed Griffey.

[Note: that "trade me trade me trade me" thing is the same thing I do in my brain whenever another blogger posts a pack opening and pulls a Griffey.  Sometimes there's squealing too.] 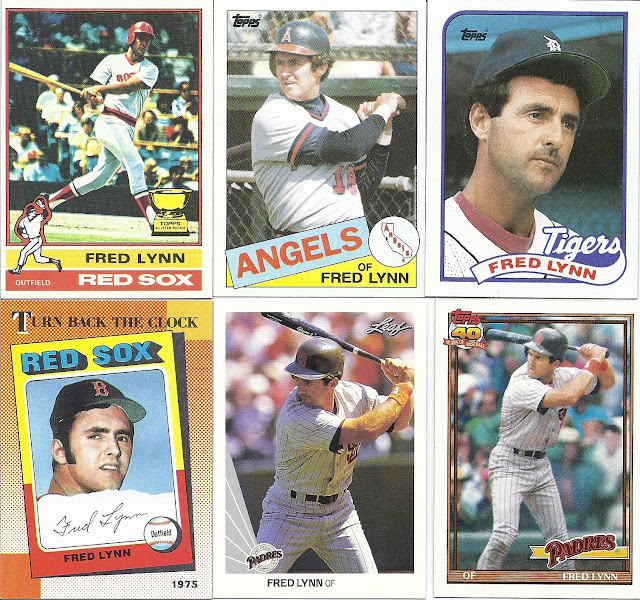 Finally, Night Owl mentioned Fred Lynn in a recent post.  Having read that, I later came across all these cards of his I had no idea were in boxes in my house.  The "rookie" (there's two seasons of pro stats on it, thanks for misleading me with the trophy, Topps.) was the first one I came across, so I put it aside and the rest followed.  I figured an instant Fred Lynn collection deserves a page in the binder.  Plus that rookie is a great-looking card, and I have almost no cards from that particular Topps set.  These six cards show every team he played for in his 15-year career.

Catch you on the flippy-flip.
Posted by The Junior Junkie at 12:13 AM