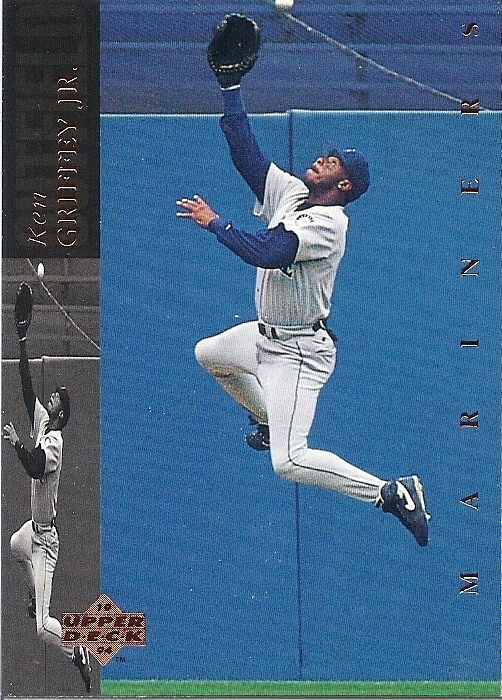 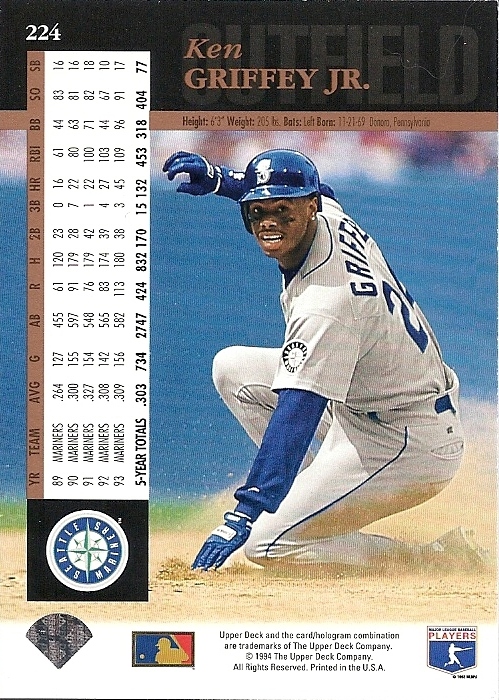 Is this a good Griffey card?: Yes.  An iconic photo of the Gold Glove winner in a landmark year for Upper Deck's design evolution.

The set: 1994 Upper Deck is to 1993 Upper Deck what Kid A is to OK Computer (if you don't know what these are, you're not as geeky as I assumed).  1993 was one of the greatest sets of the 90's, and Upper Deck said, "We've conquered the card collecting world.  Now to make something super-radical and different that will change everything all over again."

You've got the very modern, almost alienating design, old-gold foil on every card, full-bleed, lots of shiny.  I dig it, but there was nothing else quite like it.  It must have been crazy to see for the first time.

Going forward, I'll try to keep the Radiohead references to a minimum....

Hey, look what I bought. 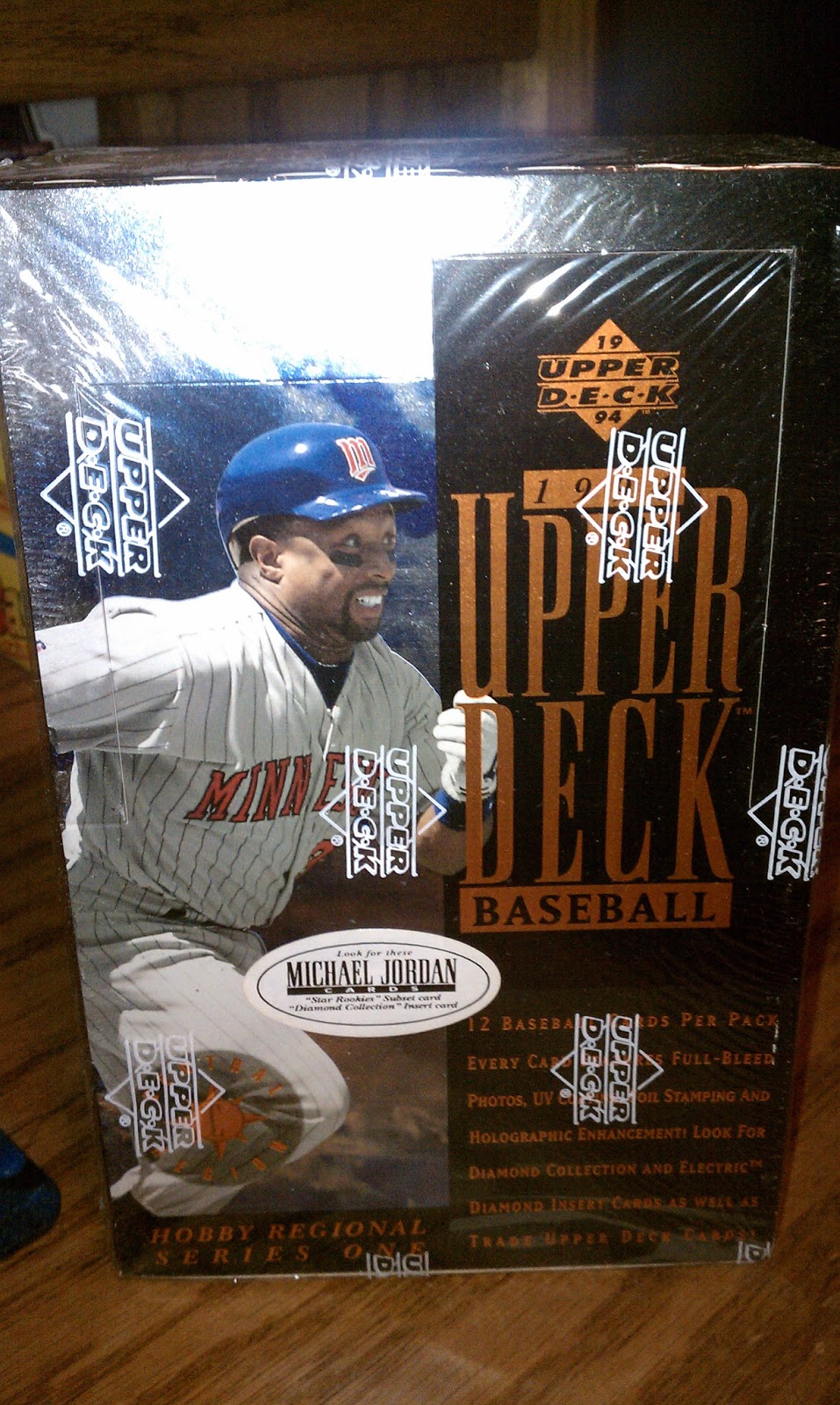 When I was a kid, this box was unattainable.  Today, it is mine to break!

And if you know anything about unattainable Griffey cards, you know why I bought this box.

Pulling any one of those from a pack would be an extraordinary experience. It probably won't ever happen, but that probably becomes definitely if I don't try. 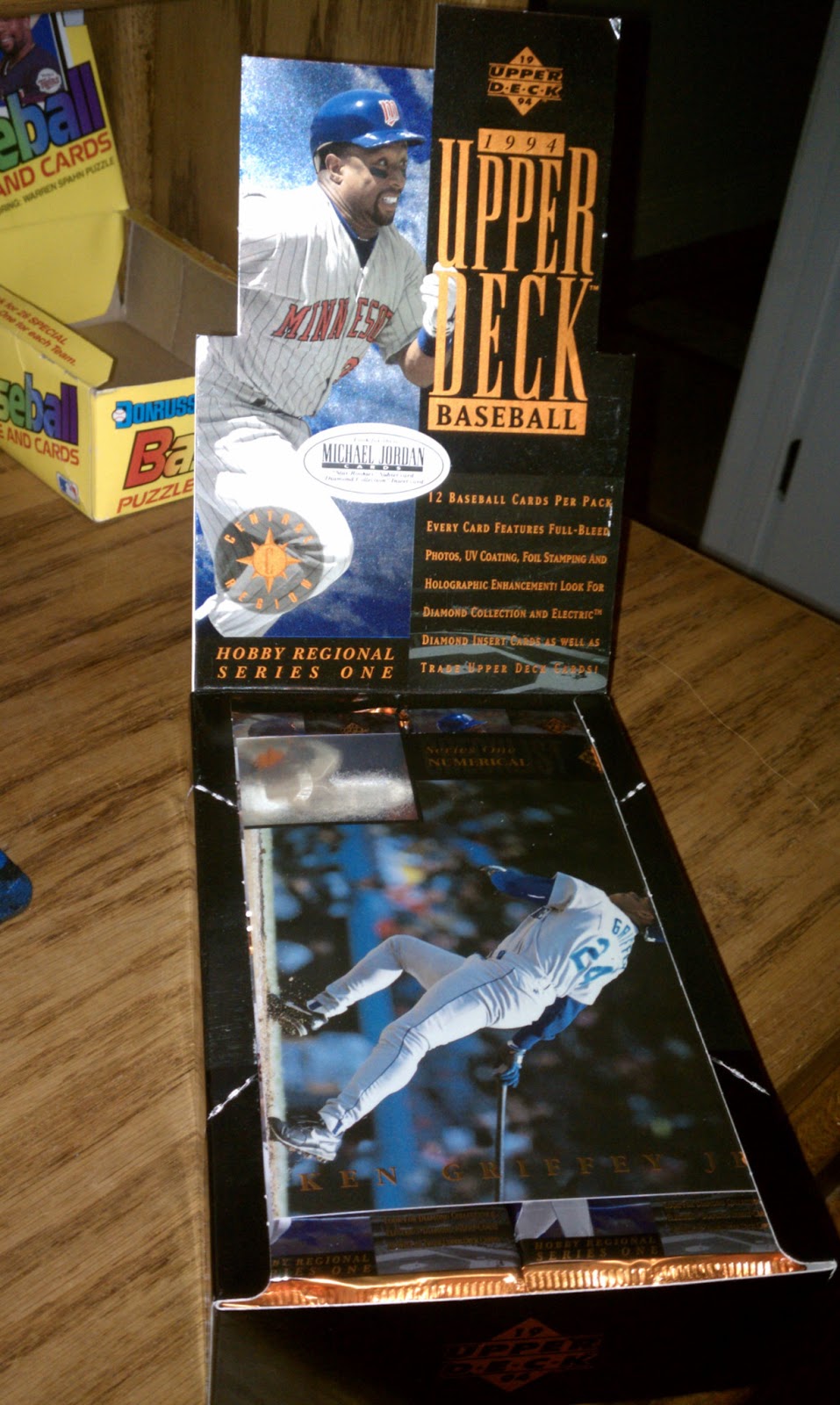 Oh, yeah.  Giant Griffey card in every box.  Already ahead!  I wonder what stores like Rite Aid and K-mart did with these.  I'm guessing trash.... Further down the line: 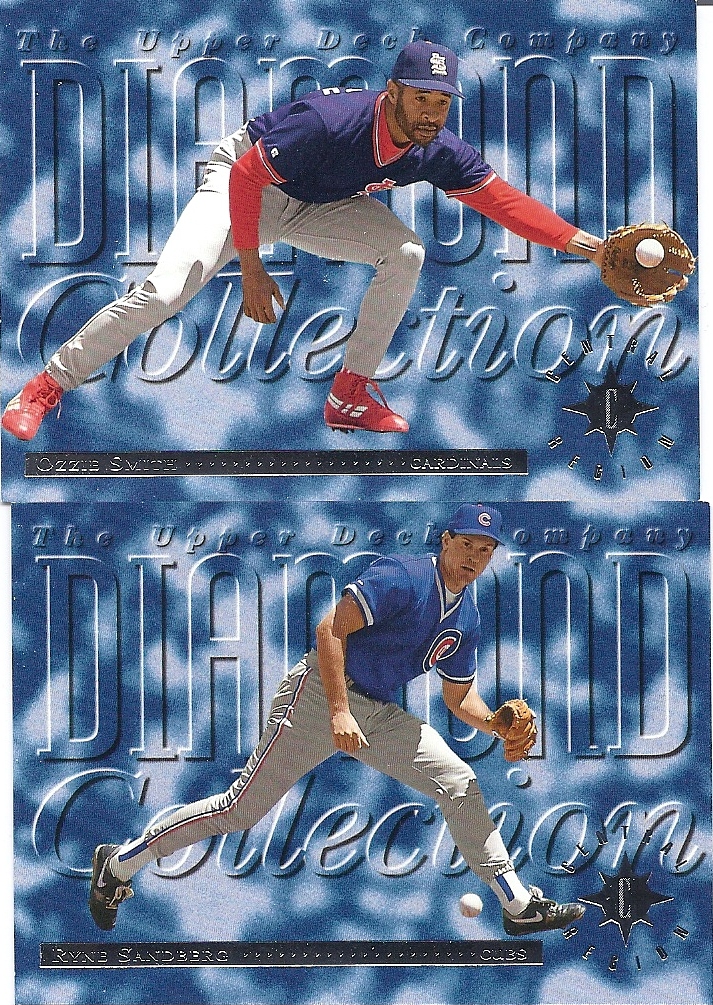 Ryno and the Wizard: two of my favorite players!  I am pleased.  What else? 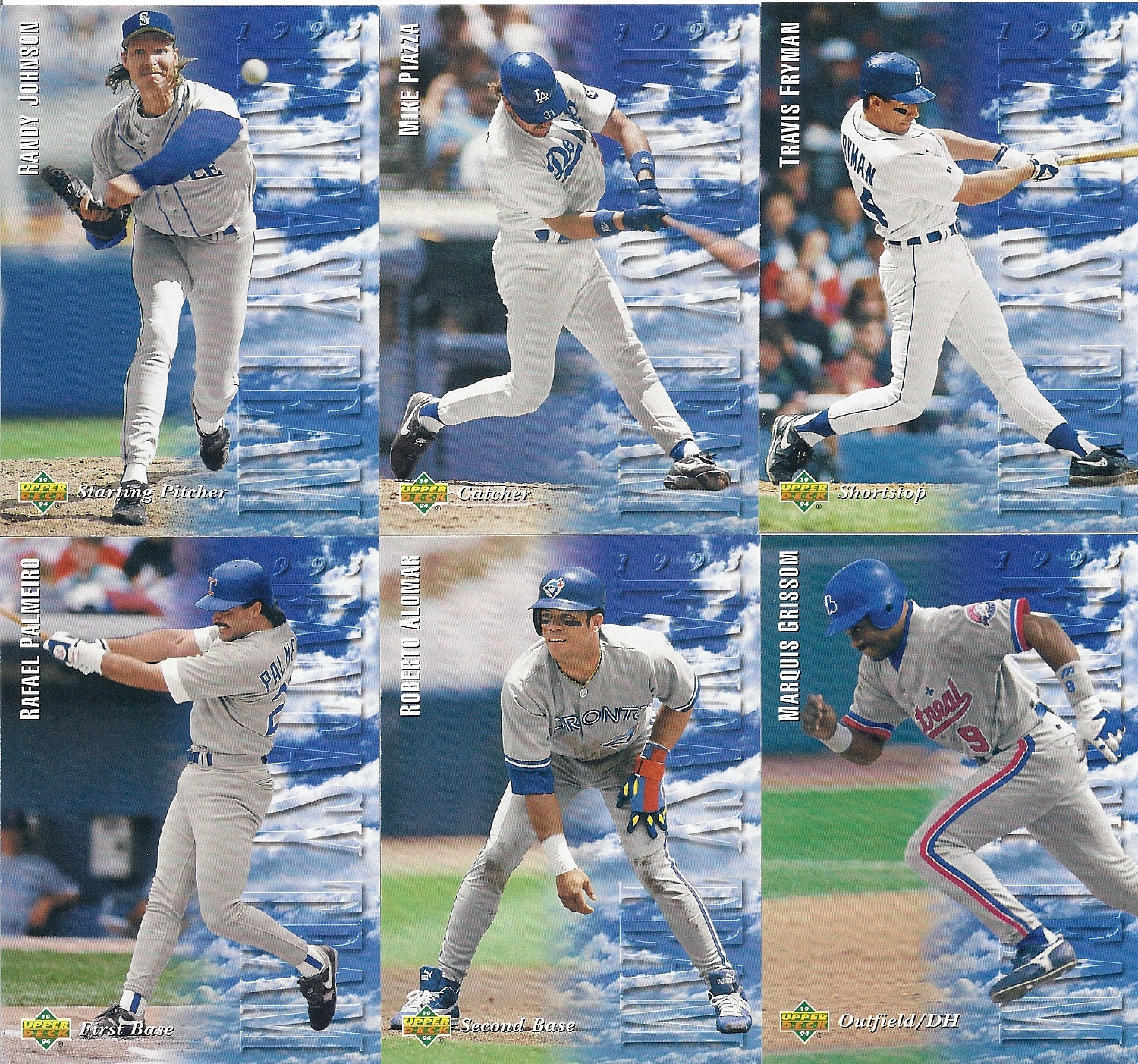 A Fantasy Team without Griffey?  Not in this house. 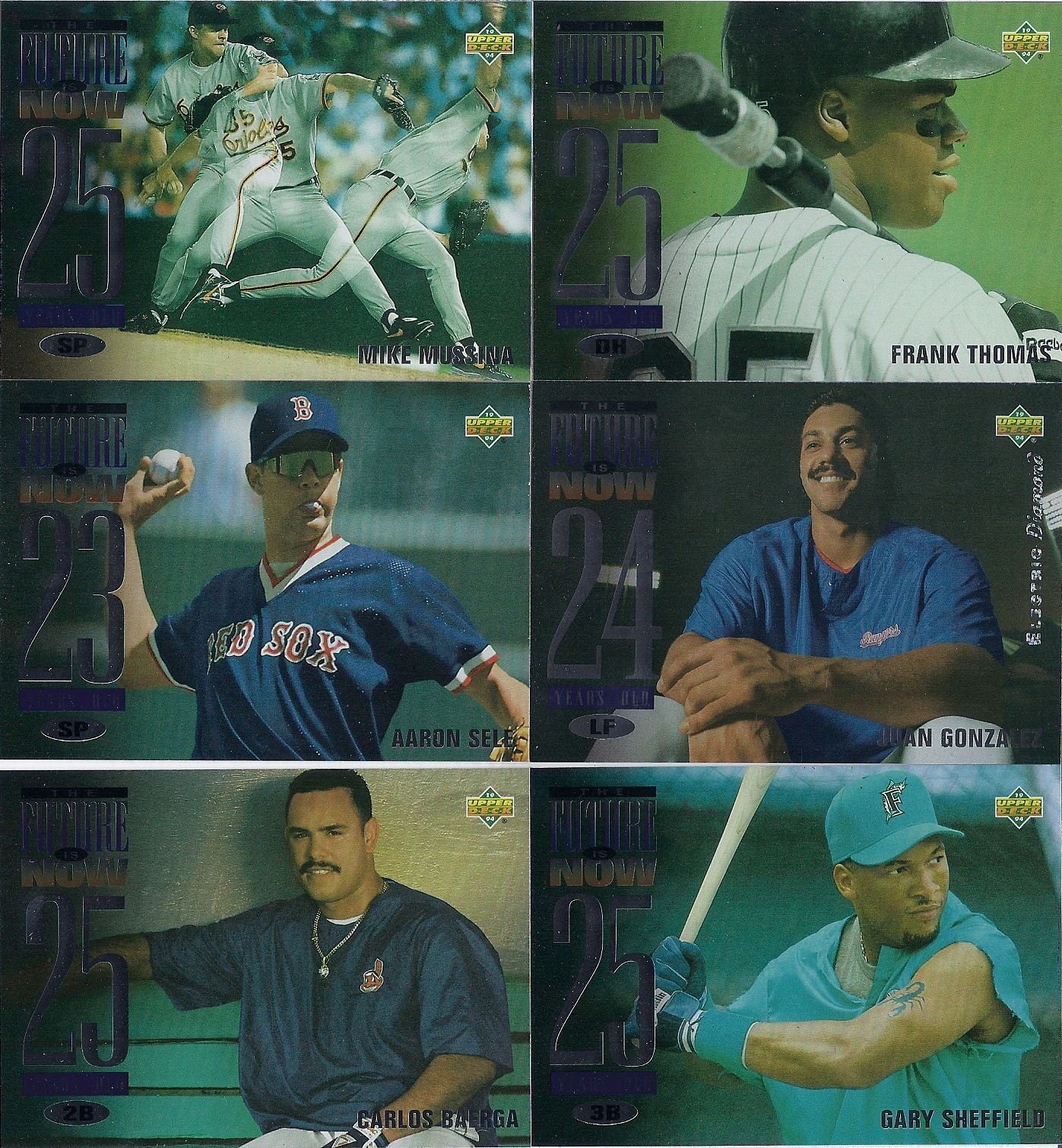 Plus I see some Hall of Famers here.  Even Sele got a vote.... 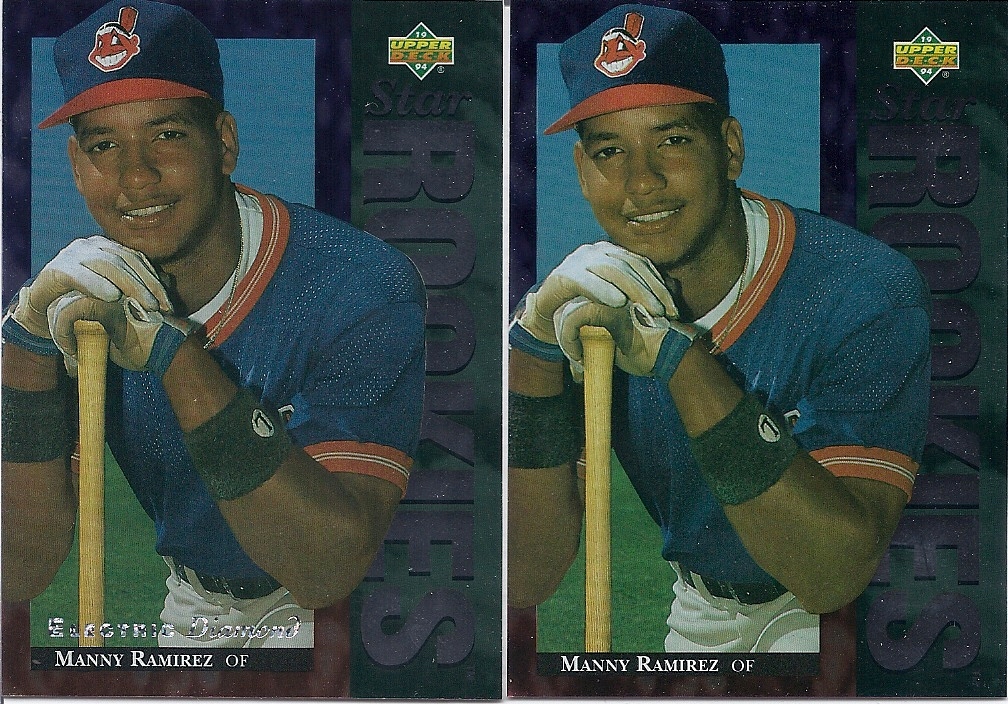 What happened to this guy?  I still don't know the whole story.  He was a jerk, or something?  Then he went to the Dodgers and he sucked and everyone was like "Ha ha, he sucks now, but it's cool because he's a total jerk?"  I'm not looking it up right now, but that's what I remember.

I got these too:


OK, so I didn't get the Mantle/Griffey Autograph card.  I figured this was going to be the case, but I got some cool stuff.


Let's check out those Griffeys:


Griffey is flying through the air like freakin' Superman to make that catch.  What an awesome picture.  I remember seeing this on a phone card (remember those?) back in the day.  I wish I had gotten one.

Let's talk about Electric Diamond for a minute.  The Electric Diamond multiplier appeared 1 per pack.  The cards are slightly thicker than their non-electric diamond counterparts, and sometimes the name on the back was in silver instead of bronze, but not always.  Look: 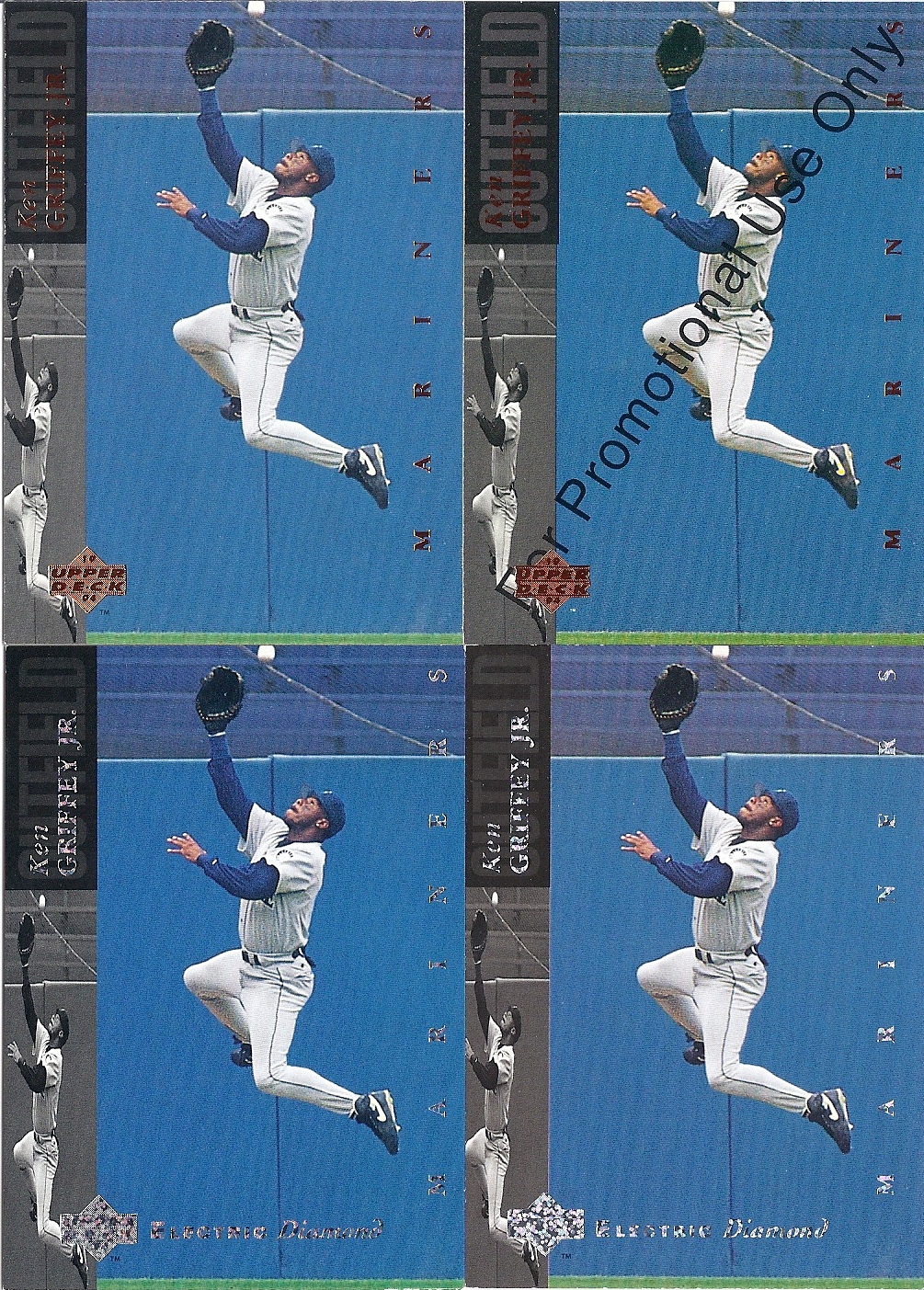 That's the regular and the promo at the top.  Beneath that 2 Electric Diamonds.  See?  Shiny player name, team name, UD logo and "ED" logo.  Let's check the backs: 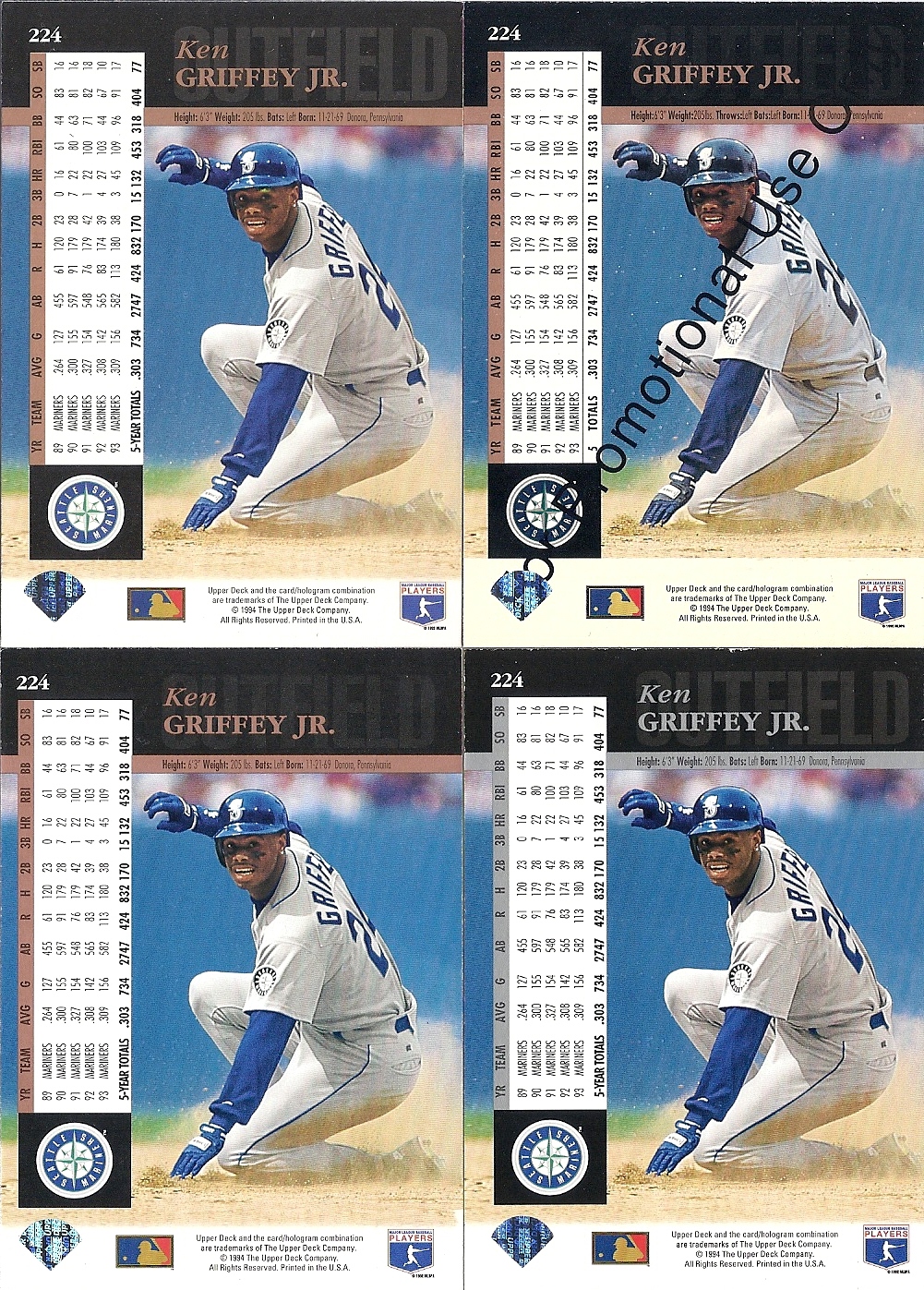 See there?  One of the ED cards has silver where all the others have gold.  I don't know if this is an error or what, but I've never heard anything about it.  [Note: see comments for an answer to this question]

While it's not the world's first multiplier (Topps Gold?), all in all the ED cards are kind of gimmicky.  But you've got to admit it sounds cool.  Electric Diamond. 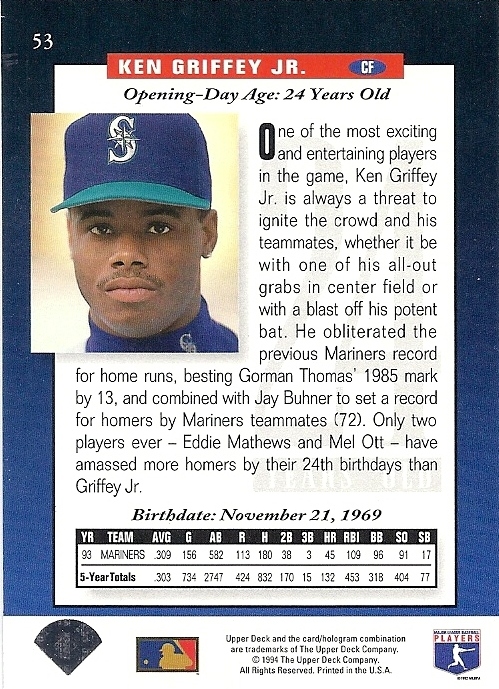 Griffey is a Scorpio on the cusp of Capricorn.  That means he kicks everyone's ass and takes names. 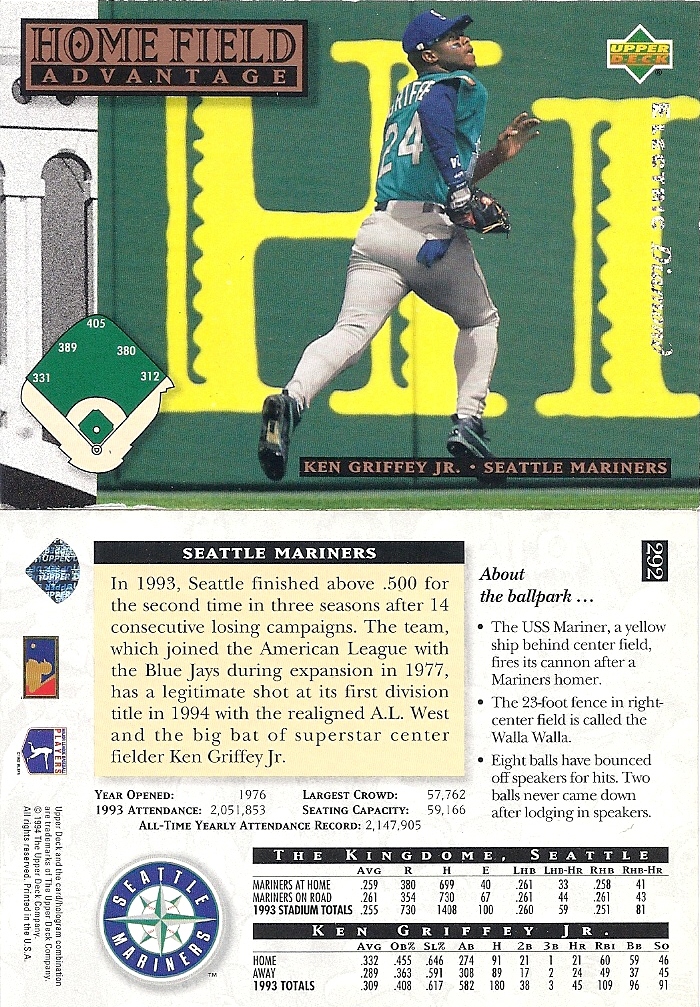 The Homefield Advantage subset appeared in both series 1 and 2, but series 2 had the Griffey.  These cards had tidbits about the stadium and the player's impact there.  Really, it just reminds me that I never got to see a game at the Kingdome. 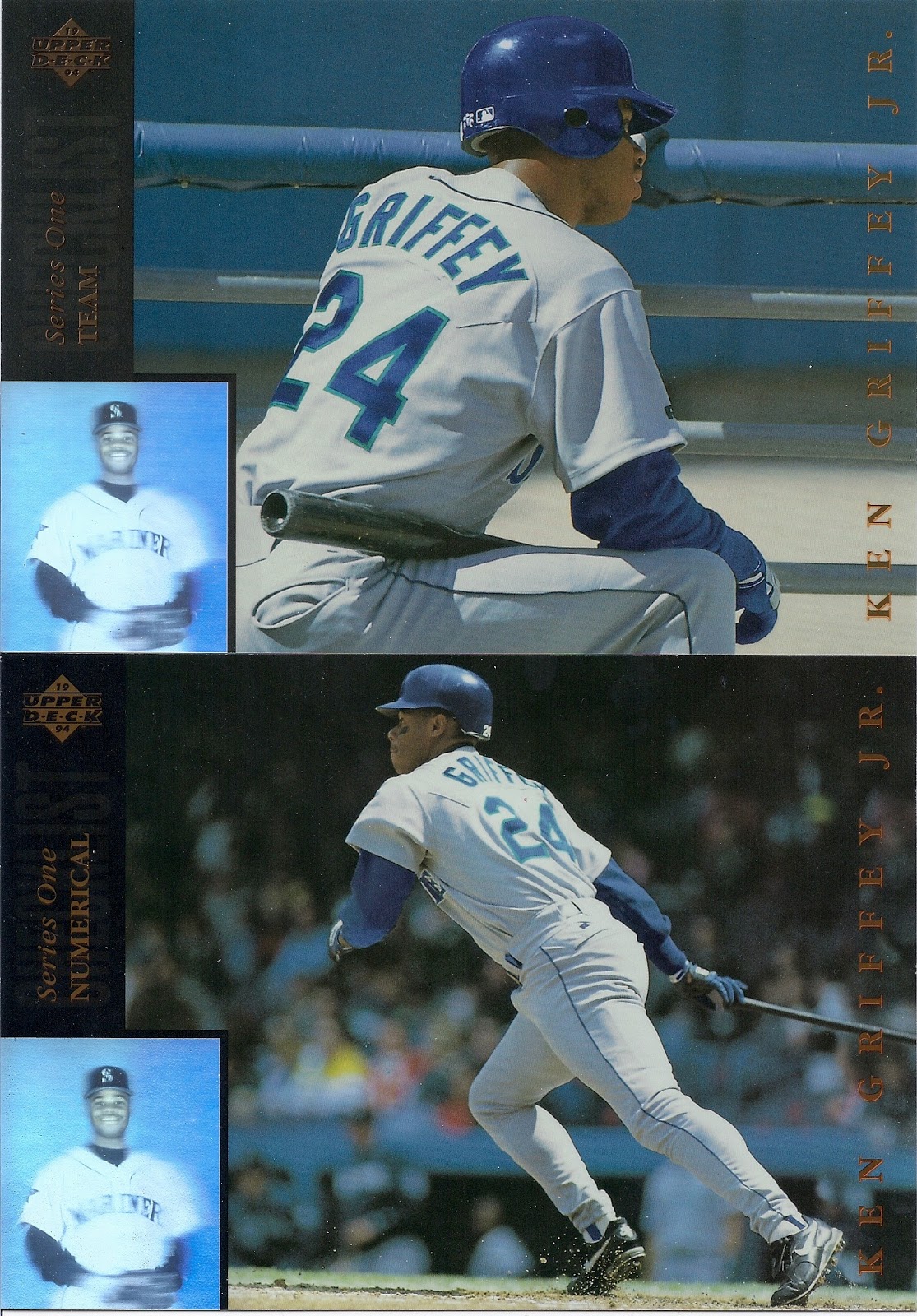 These checklists came one per box.  There are 4 of them, all 5"x7" with holograms.  They are hard to store but pretty damn cool if you ask me.  I have 2 of the 4, but am not really working terribly hard to find the rest.  Here's the back in case you wanted to take a nap: 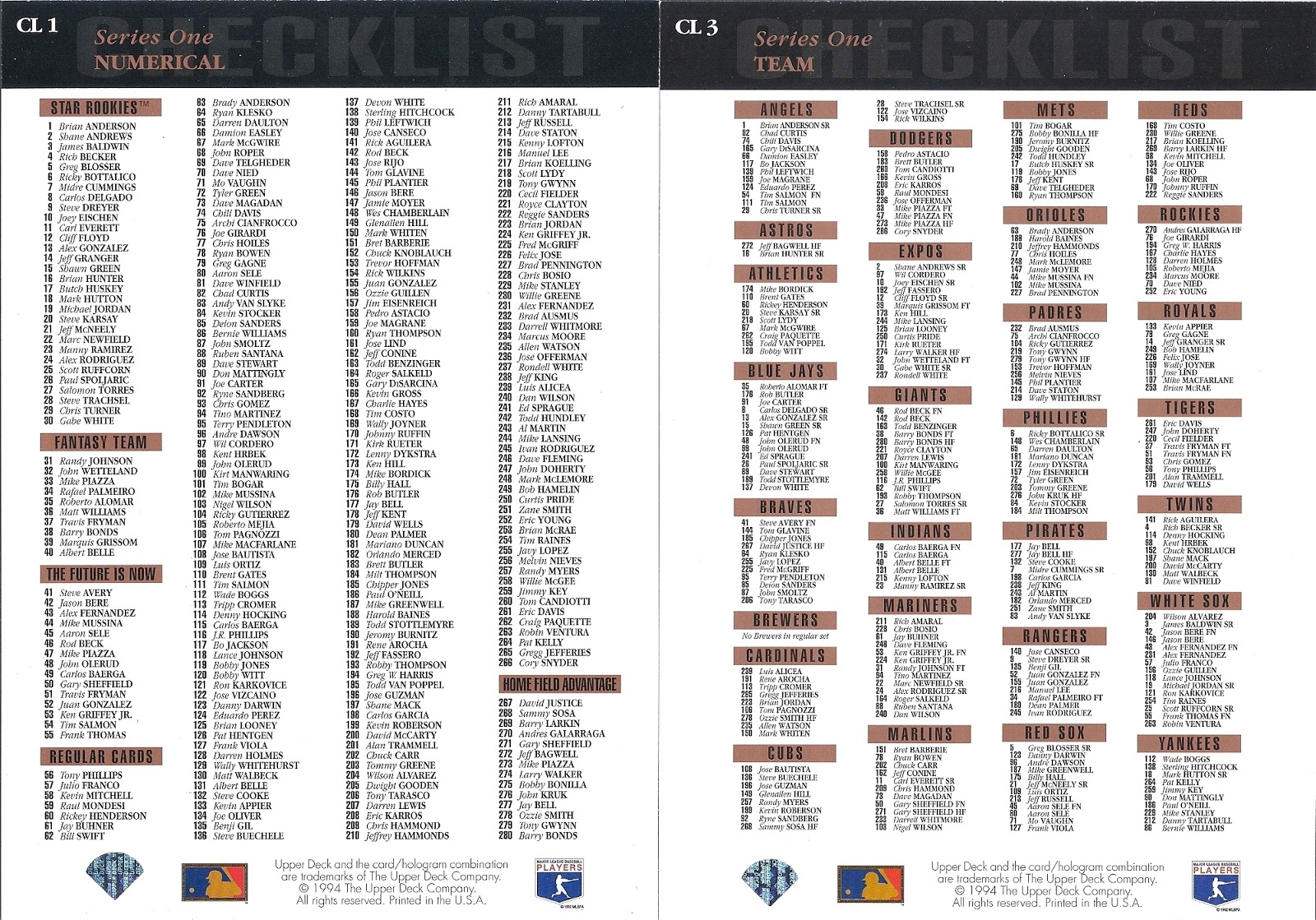 That box was not worth it as I already had all the Griffeys I got.  The A-Rods and MJ helped, but for the most part, I feel like I broke even on a scratch-off.

Still, a cool set with decent photography, and a groundbreaker regardless of how you feel about Upper Deck.  The 1995 design is even better, all minimalist and classy.  You'll see.  Good night, Baseball card people!
Posted by The Junior Junkie at 10:20 PM