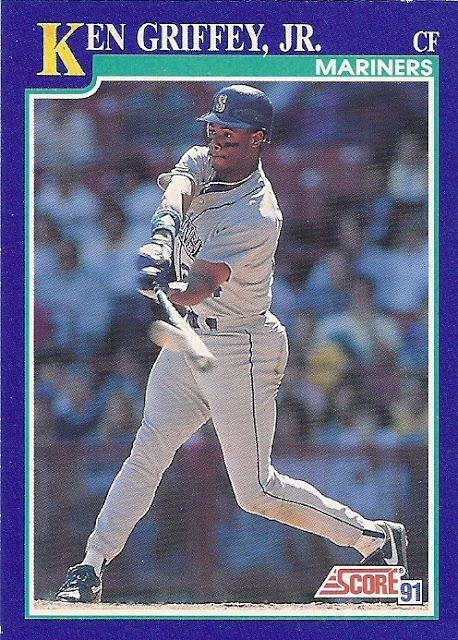 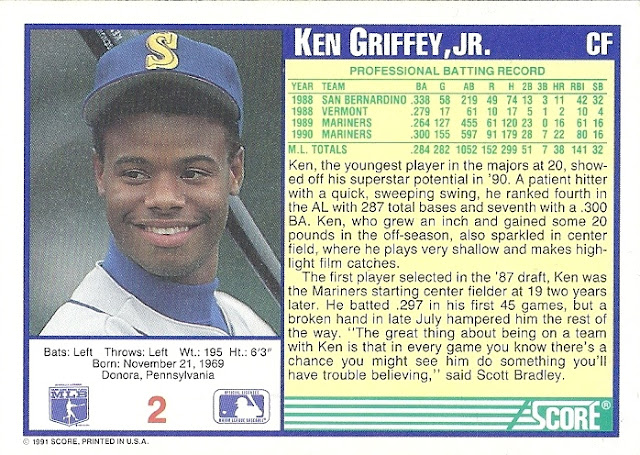 Is this a good Griffey card?: Yes.  While the design leaves a bit to be desired, the picture is amazing and Score does a heck of a job feng shui-ing the back of a card together (with color portait).

The set: Get ready for action - there are some solid Griffeys in this lot.

1991 Score had a lackluster design and lot of uncorrected errors in the set, but the awesome card backs and numerous subsets and inserts made up for these shortcomings.  Lots of cool potential pack pulls, blurbs on every card with full stats, card number tastefully placed - Score is underrated, people!  Though they certainly bought into the whole insert and subset thing.

Here's some cards from the regular set:


The oversized first letter of each card made for some pretty fun times in my day.  Anybody else pull one of these? 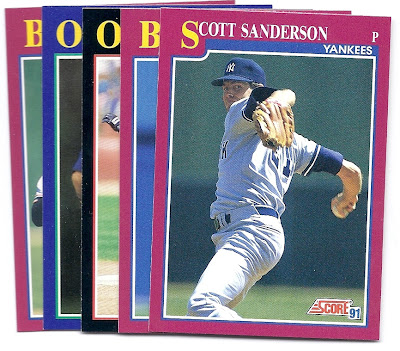 I went ahead and made a few more words and scanned them in, but I decided to leave them out.  This is, after all, a family blog.

Score also included some one-off special cards right in the set.  I love these:


And check out these boldly designed rookies: 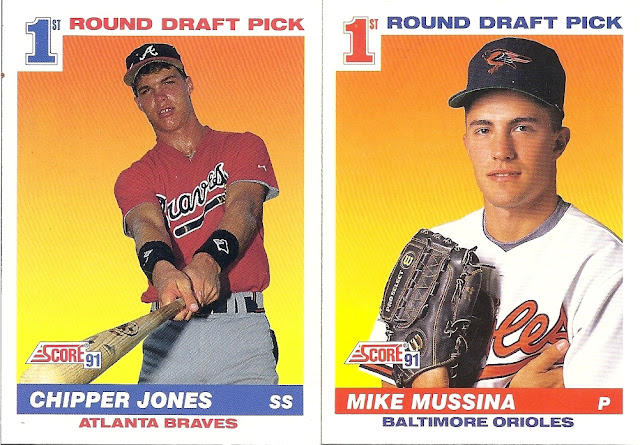 That background - it's like they're smoldering with talent.  Chipper ended up being one of my heroes, so I love this rookie design a whole lot.

These, too, are kind of cool: 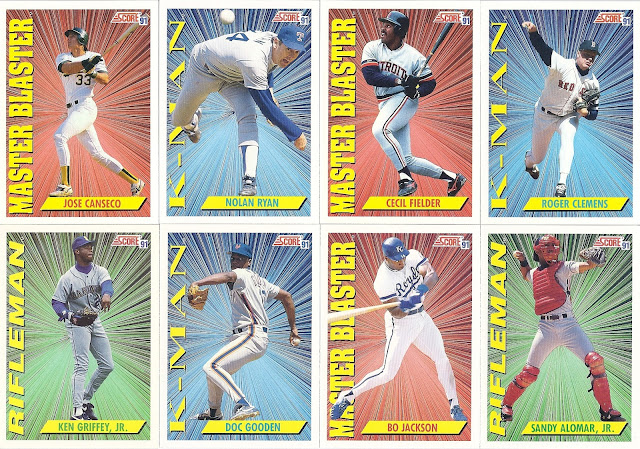 So hitters are "Master Blasters," pitchers are "K-Men," and fielders are "Riflemen."  Fair enough.  This subset appeared in the high numbers and looked amazing for 1991.

These were a mistake:

Oof.  Even the Kid's is just awkward to look at.  And they did it again the next year!  Believe it or not, those illustrations start to get a lil' racist..... Tune in for that one.

Here is a subset they did right: 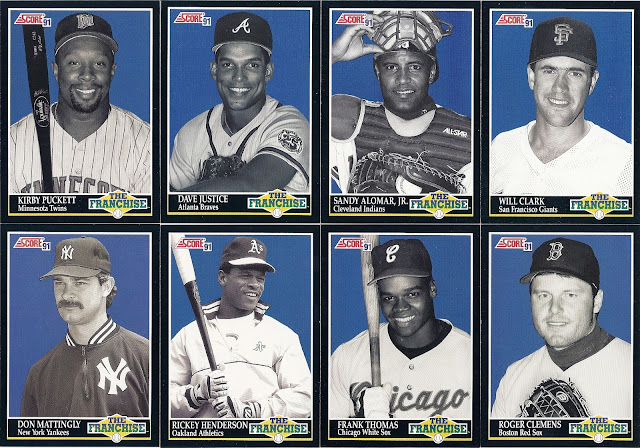 Classy black and white, blue background and hints of color here and there (to differentiate them from the Conlon Collection maybe?), and a monster lineup.  Nicely done, Score.

And that's not all they did right: 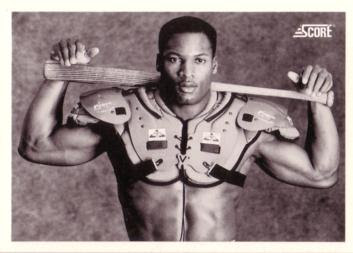 Everybody was keyed up on Bo Jackson in '91.  You know those "Bo knows..." commercials?  Bo knows baseball, Bo knows football, Bo knows sexy photography meant for children of the same gender.  Remember?

Well at least the cards depicting sexy guys are out of the w......

It's getting a little awkward in here.  Canseco awkward.

Time for some comic relief: 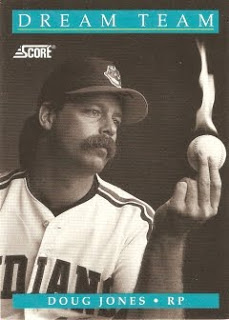 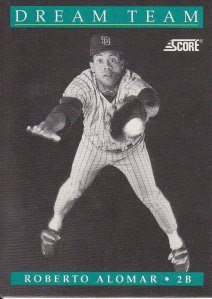 To be fair, most of the Dream Team cards are actually really awesome.  Wait 'til you see the Griffey - it's super classy.  This Alomar on the other hand looks like a dance audition for West Side Story (he's a Shark).

Ladies and Gentlemen, one of the greatest inserts ever made:
﻿
﻿
If you peruse this blog just to find cool inserts, you can stop at this post.  The Cooperstown Cards are beautiful and way ahead of their time.  The art makes Diamond Kings look like cat paintings, and the minimalist layout and classy fonts offset the fade nicely.  Look at many of the sets from recent years and tell me Cooperstown didn't have them beat by 15 years,  Ya can't do it.

OK, enough other guys.  Let's look at the many Griffeys: 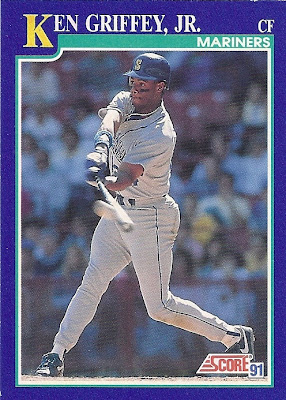 Griffey looks calm as a Hindu cow as he connects with what is sure to be at least a double.  This picture is amazing to me.  The guy is focused on a spot 4 feet behind where the ball is in the picture, and is just swinging through it with that natural, fluid Griffeyness that won all our hearts (and three home run derbies). 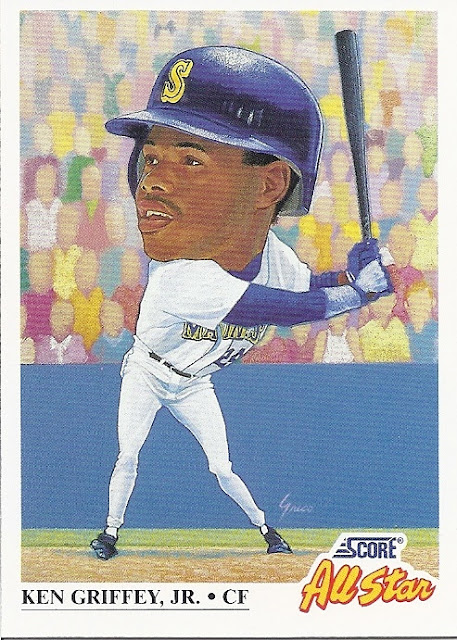 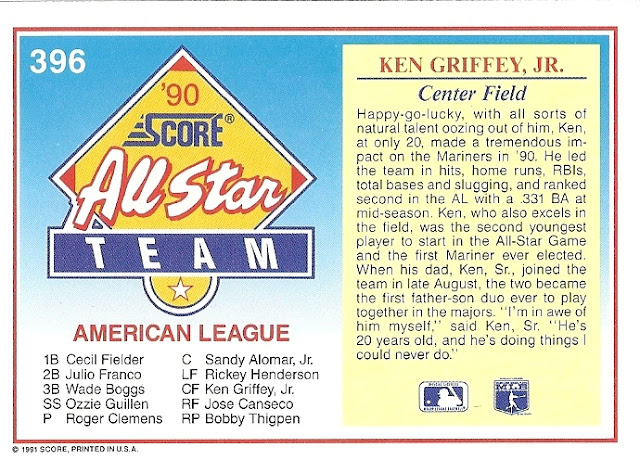 Look what they did to our guy.  He's got skinny little Salvador Dali legs (not meant as a compliment).

Sadly, that caricature is the best one of Griffey you will ever see from Score.  I promise.  Just wait a few more posts for the 1992 version. 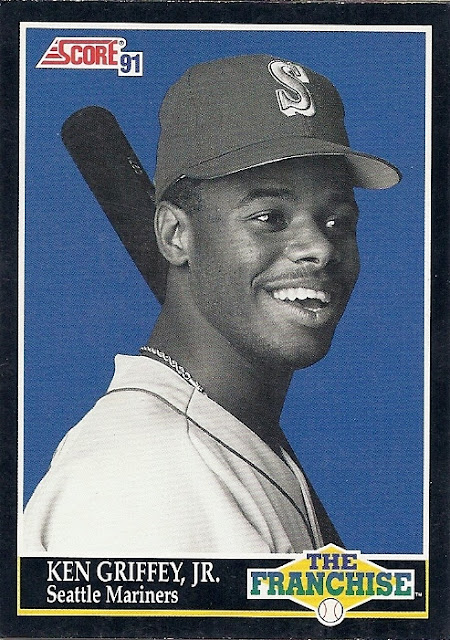 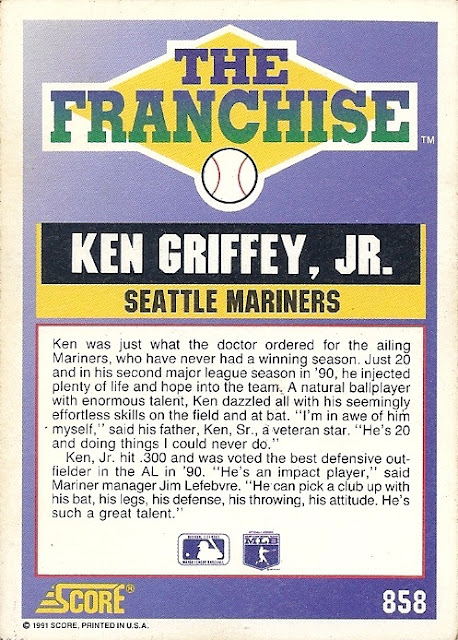 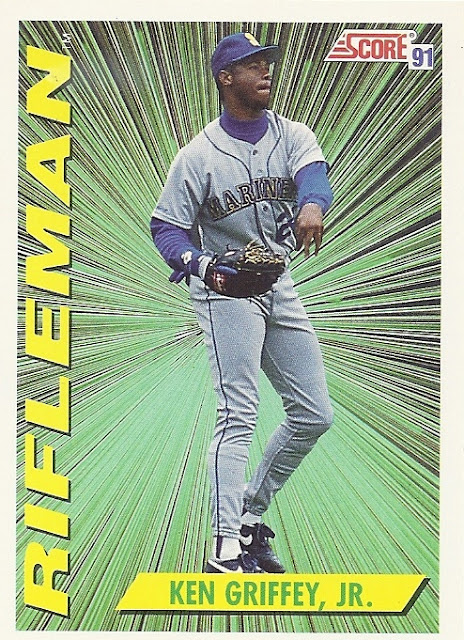 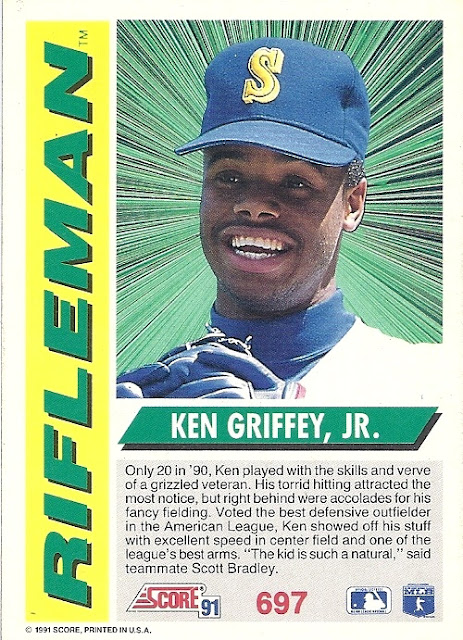 If "his torrid hitting attracted the most notice," shouldn't he be a "Master Blaster?"  And with "one of the league's best arms," I'm certain he could compete with any "K-Man."

So, I put it to you - shouldn't he get his own subset called "K-Rifleblasterman?"

Just trying to be fair here. 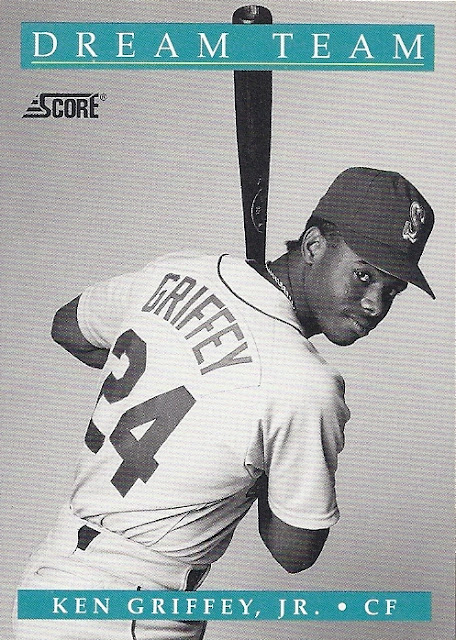 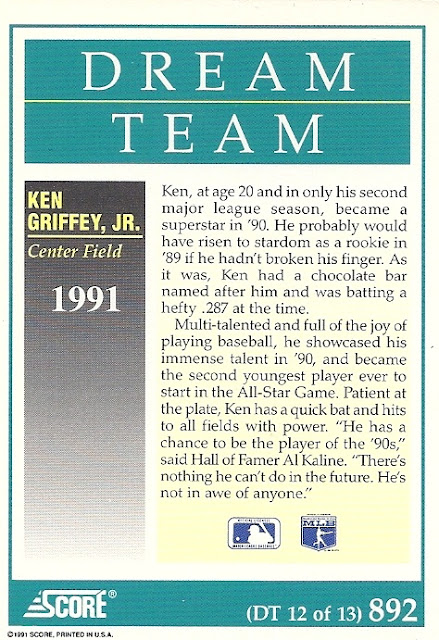 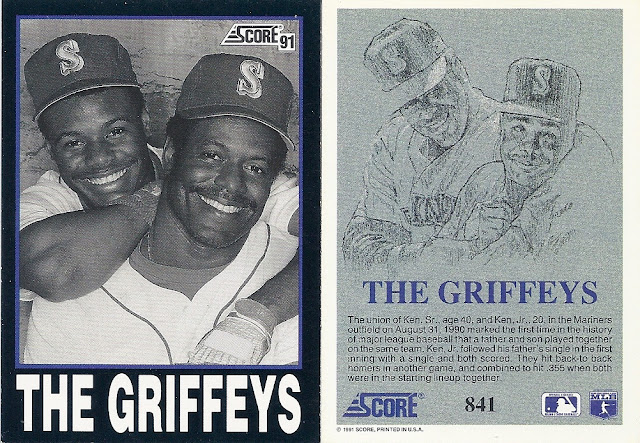 The Griffeys got their own one-off specialty card.  And it mentions their back-to-back homers which were still pretty recent at the time.  In all, this card is adorable and heart-warming.

The sketch on the back is pushing it, though. 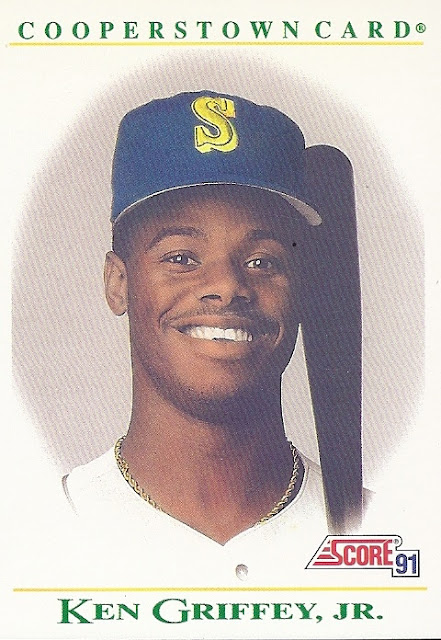 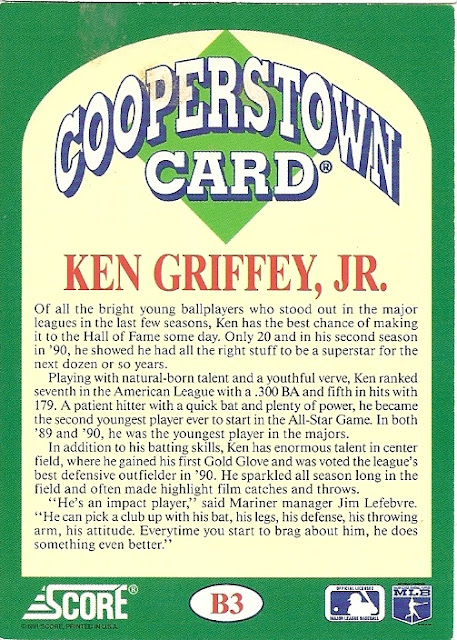 I decided to try and get Griffey's autograph TTM (through the mail, for those of you with lives and girlfriends) when I was a kid.  I picked one card: the Cooperstown Card.  I put it in a good slip case, mailed it off with a letter, and forgot about it.  About four years later, the card came back, bent in half with no signature and no letter.  Just a slip of paper from MLB that essentially said "no."  Now I have three of this card, and one of them is bent. 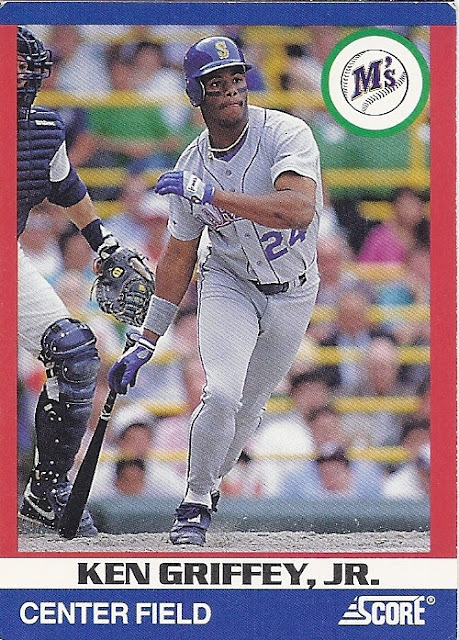 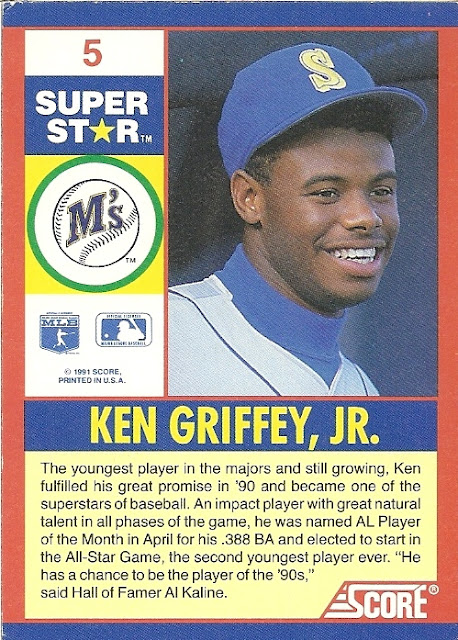 This is from one of those Score Super Star sets that blah blah blah moneygrab buy our crap.  At least we know he "fulfilled his great promise" to be on eight different Score cards in 1991.  Eight.

So, was that too many Griffeys for one post?

Posted by The Junior Junkie at 1:25 AM