Surprises from the Card Shop

We used to have several, the most prolific of which was Frank's with several locations.  Those are all long-gone since Katrina.  I have never seen another until I Googled and discovered Markman on W. Esplanade in Metairie.

I needed some long boxes for my sets, so I decided to go.  There were no dime boxes, sadly, but I cleaned out every Griffey I needed or wanted dups of from his dollar bin and grabbed a couple cheap long boxes filled with mystery cards.

I got these from those boxes: 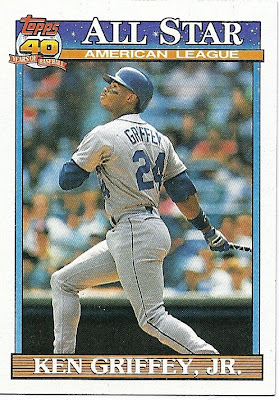 I wasn't expecting any Griffeys at all, so this was a nice surprise.  I have, oh, 3,000 of this card, but another couldn't hurt.  And I always loved this "All-Star" banner depicting the night sky.  Man, '91 Topps rules. 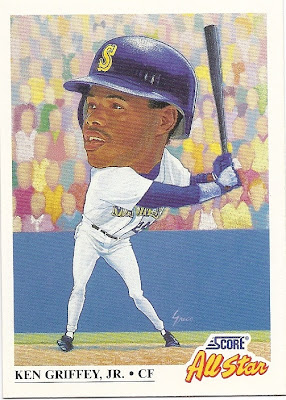 OK.  I'll take it.  To quote my uncle, Griffey cards are like pizza and p****, even bad ones are still pretty good.  My uncle is filthy but hilarious. 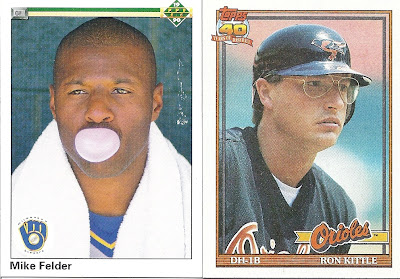 A guy blowing a bubble - one of my sub-collections.  Score.  And a Ron Kittle!  This is turning out to be a decent enough junk wax box.

Hey, look.  There's a whole bunch of '89 Bowman sitting sideways in this box.... 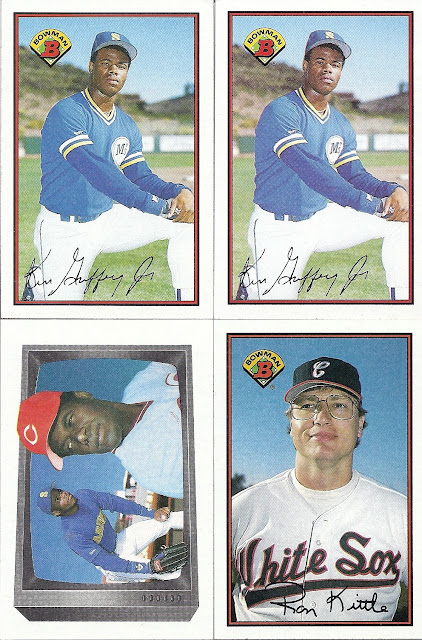 My wife even got a little excited for me when I started pulling these out of the box (she knows I'm a Griffey weirdo).

So, yeah.  I want more of those boxes.  I also got a fistful of Will Clark, Steve Carlton, Carlton Fisk, Fergie Jenkins, Nolan Ryan, Rod Carew, Will Clark, Dave Winfield, Ripken, Mattingly, Ozzie (Smith not Canseco), Nolan Ryan, Rollie Fingers, Dale Murphy, and Clark (Will) plus a buttload of early-80's Fleer and Topps.  It was fun to look through and better than any repack box I've bought.

I apologize for the Klingon.  My posts just keep getting nerdier....

Coming next week - Massive 80's Glasses on Guys Named Tom: Hume vs. Henke - Who Wore Them Best?
Posted by The Junior Junkie at 11:04 AM