This is going to be the most boring timeline yet.

Bowman is among the all-time big boys.  It's one of the very few sets that was around before Griffey played and one of the even fewer that stuck around after.  Despite this fact, I have never been a big Bowman guy.  I’ve picked up the occasional pack here and there out of curiosity, but I have no real attachment to the set.  Some years I completely forget it exists, yet I have a strange reverence for their ownership of the rookie card.  That’s marketing for you.

At the same time Bowman has given us thousands of cards for guys who may otherwise never have  gotten cards of their own not to mention autographs and super refractors and a ton of inserts that just look like base cards but with chrome variants, color parallels, and American flag backdrops.  It’s all very confusing.  How do Bowman collectors keep up?  And what is the difference between a BBTPP and a BPTP and a BBBPPT<fart noise>BPP?  Even with a Beckett in hand it takes fifteen minutes to figure out what card I’m looking at.  They’ve created a monster, but it wasn’t always that way… 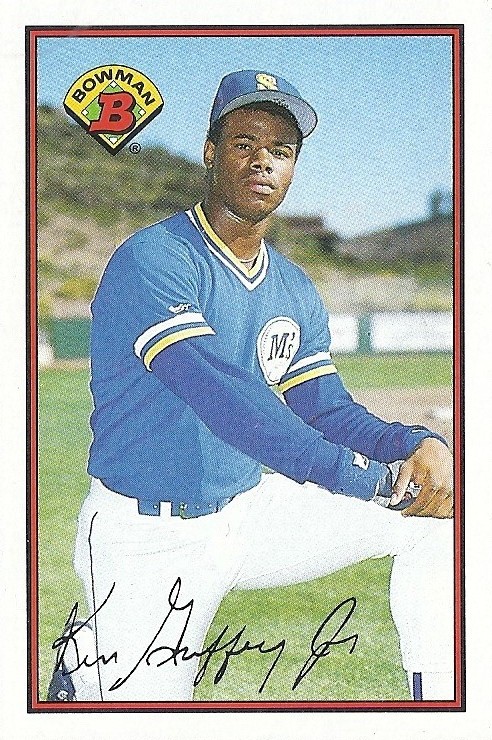 Bad start, I know.  The thing about this set that’s so frustrating is that I love the design here.  I love the border, I love the photography, and the signatures are great.  I don’t even mind having to occasionally flip the cards over to read the names for the guys I don’t know.  Really - it’s a great-looking set…..but that extra quarter-inch, man.  I get mad at these cards.  Like Yosemite Sam mad where I’m all jumping up and down on my hat and yelling “tarnation,” which I’m not even certain is a word anymore.  I actively try to shed these card regardless of the players on them (except Will Clark - I kept that one).  I will admit, though, that the "Tiffany" version is beautiful and one of my favorite cards.  Still, this set needs a mohel. 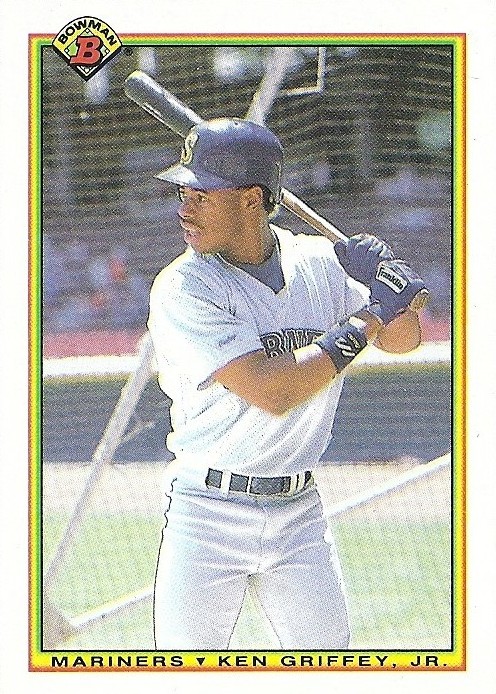 I’ve seen this referred to as the “Rastafarian Set,” but those are just the colors of the Bowman logo.  Still, there really isn’t much to this design.  The tri-colored name plate also serves as a border with the tiny player name along the bottom and the logo up top.  I don't care for this set, but someone out there does - I have proof.

A few months ago I ordered a few boxes of packs from dacardworld.com, and with my boxes was an extra box of 1990 Bowman which I hadn’t ordered.  There was an invoice with someone else’s name and everything.  After e-mailing their customer service department and asking what I should do with the box, they replied “Keep it - it’s not worth sending it back.”  It was true, too.  According to the invoice this box cost the same as its own shipping, so why bother?  Obviously someone out there wanted this thing really bad.  I suppose there’s a fan out there for every design no matter how unspectacular.  If you're out there, '90 Bowman guy, I question your taste. 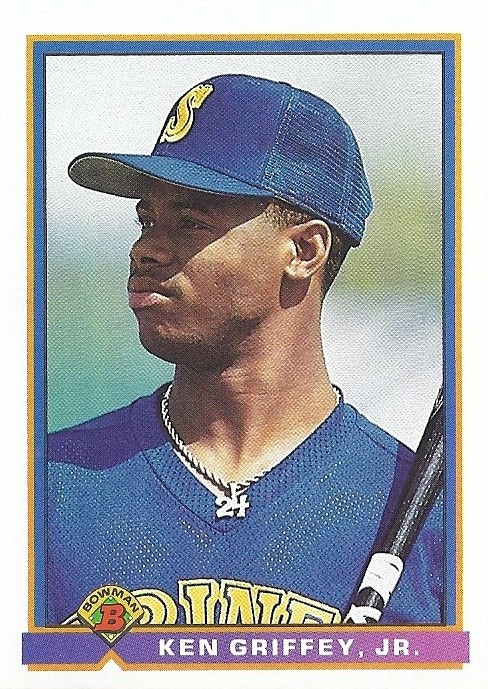 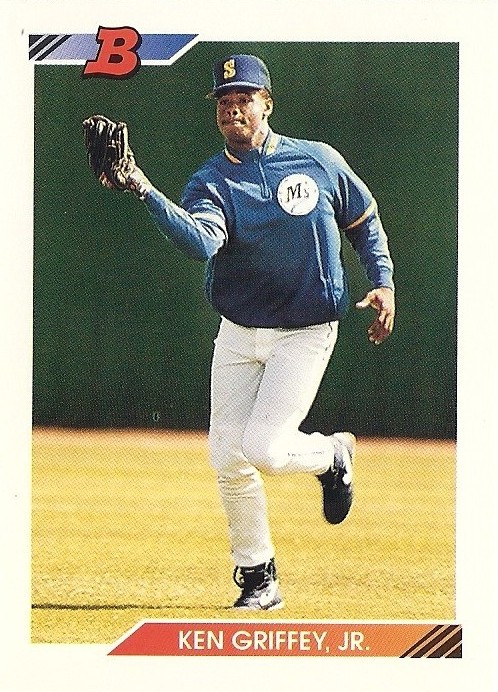 A collector favorite, this design is clean and simple; and while I usually prefer multicolored designs, the prominent white border sets off those red bars real nice.  The photography is excellent and the bright red Bowman B talks to you.  Not only that, but this year they switched to a high-quality card stock with full-color backs and glossy fronts.  Swoon. 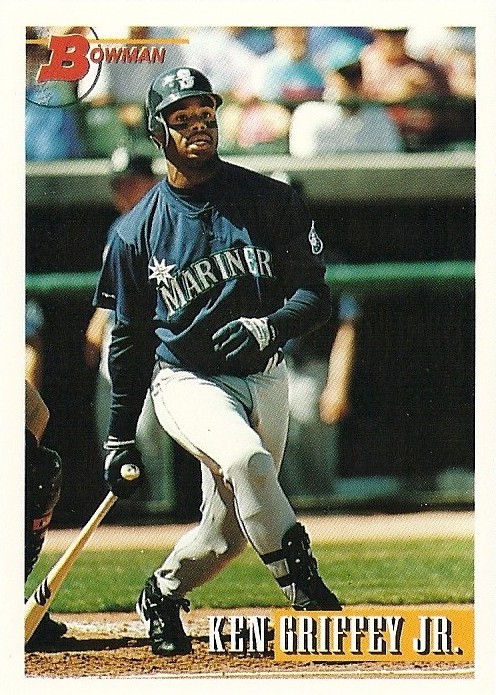 The yellow and white with the red Bowman logo combine for a look that’s a little fast-foody.  You can really see the natural progression in design here from the ’92 set - still, they managed to cheapen it with that Arby’s font and the mustard and ketchup colors.  I think that even if this set had really great photography (which it does not), it would be known only as “that ugly set with great photography.”  There’s an early Jeter rookie in this set that’s worth a pretty penny, despite its ugliness. 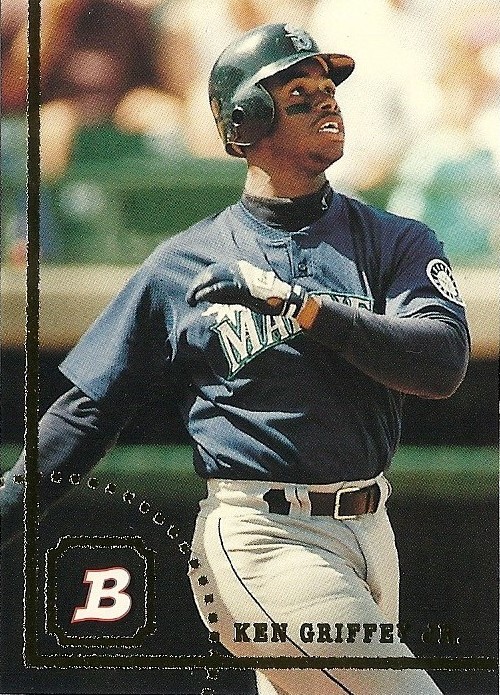 I think they nailed this one.  Full-bleed at last, this is a deceptively simple and balanced design that works well with the photography and emphasizes that big, awesome B of theirs.  Plus it’s got foil on every card for the first time in Bowman history.  It’s not the most intricate design ever, but it’s cool and oh-so-90’s.  Luke Perry probably helped design this set. 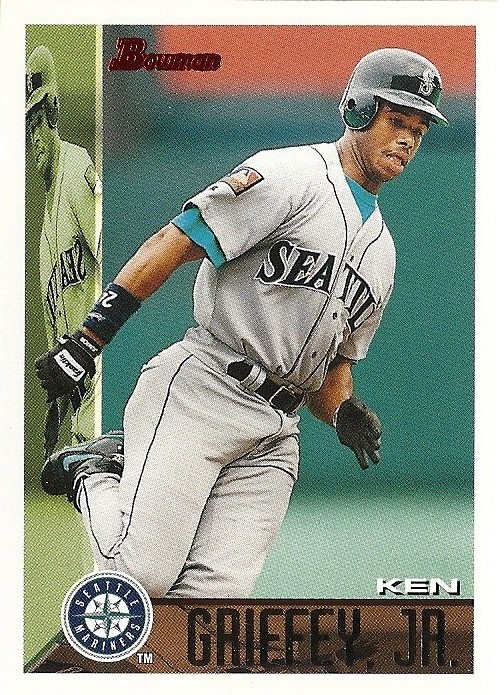 It looks like Bowman took a page from ’94 Upper Deck with that compressed and monochromatic version of the image on one side.  We also get a nice team logo (finally) and two kinds of foil.  Players are superimposed over the compressed side picture but not the bottom name plate, a detail that may seem subtle but looks really good.  It could be argued that this card is cluttered and overdesigned, but I like it. 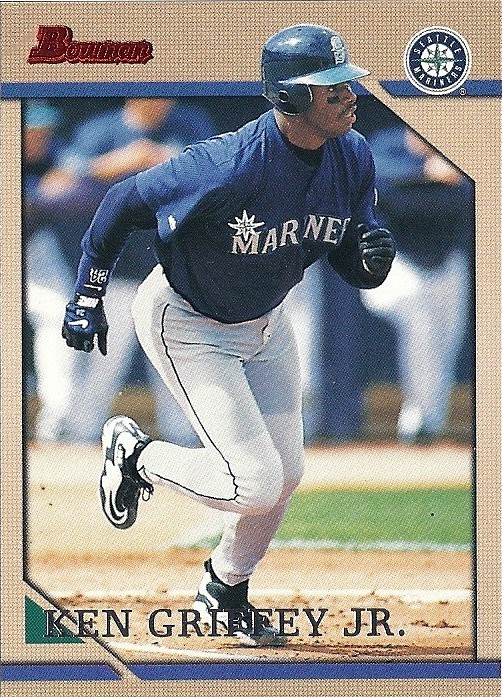 Same here - a lot of stuff going on, but it looks good.  They returned to a full border in simulated cloth (see the little threads?) that gives a warmer feeling than a plain white border.  I like the nice, big foil letters and the red foil brand logo.  The bright colors against the earth-tone background inspired me to nickname this “the Native American set.” 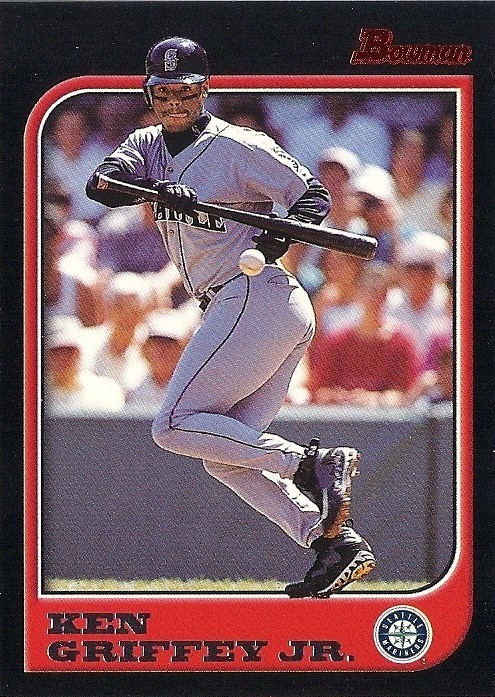 Every piece of the design here is bold and simple, but this is also the beginning of an era.  Here is the first set wherein they really focused on the red for stars, blue for rookies idea.  It’s also the first of many sets to come with more condition-sensitive black borders.  Why?  Because they’re jerks - that’s why. 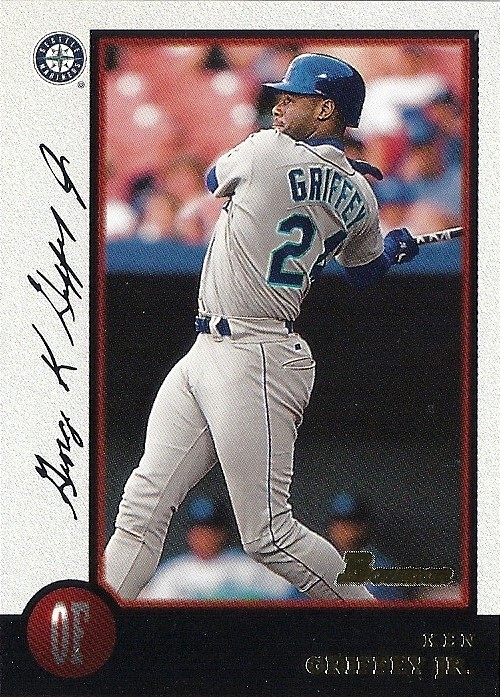 The set designs really start to run together at this point in the timeline.  ’98 is the beginning of the vertical signature years.  They are dominated by a photo with the signature running vertically up one side and name below in foil.  All three have some sort of red border to signify that this is a star card and not a rookie. 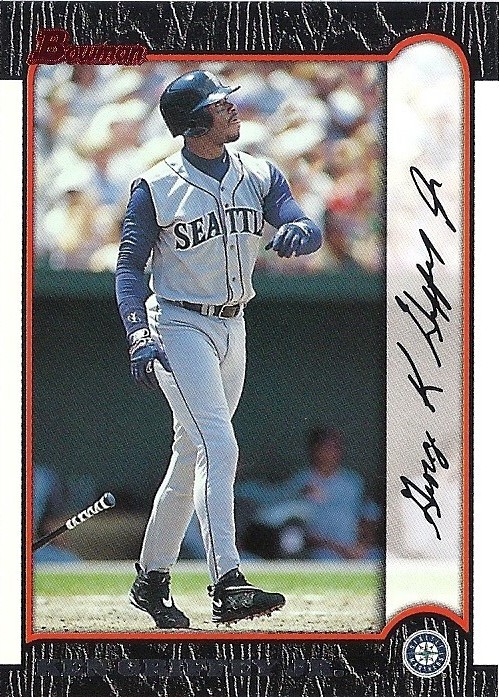 The same description as above but with a dark wood-grain pattern in the background.  This is my favorite of the three vertical signature designs. 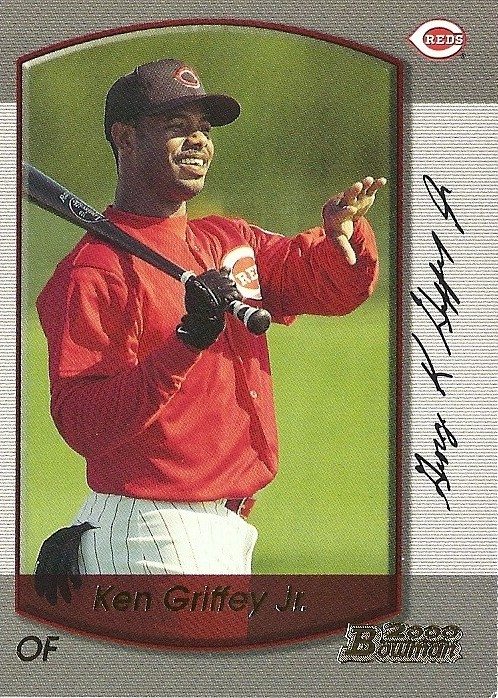 The last time we would see a team logo on a Bowman base card for ten years and the only time they would include the set year on the front. 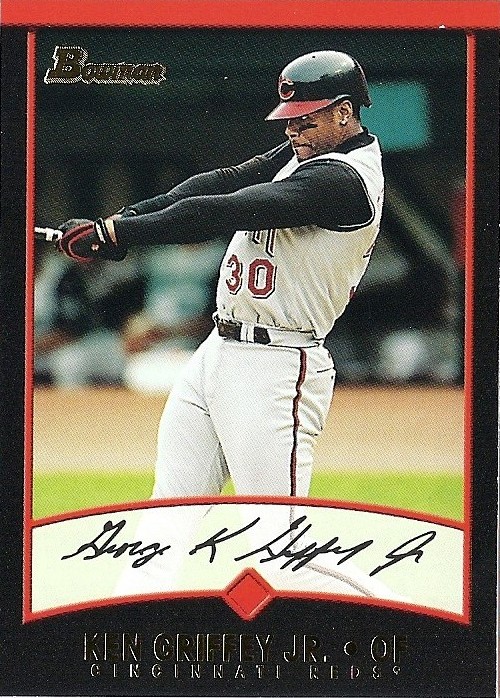 The last of Bowman’s fundamental design changes, this year they decided to center everything.  The gold foil looks good against the black border, and this is the first year of the now-characteristic white shaded area containing the signature.  Even older and wiser me used to get excited by these, thinking they might be real signatures and maybe I just got an autograph hot pack.  I’m pretty stupid sometimes….   Still, this is one of my favorites of the decade.

Perhaps it’s their adherence to the red-for-stars theme, but for the remainder of the timeline the base designs do not stray far from this standard layout.  There’s the occasional name moved to the top or slightly off-center name plate, but it’s all the same basic design.  Say what you will about ugly sets (I have), but at least they are usually easy to differentiate. 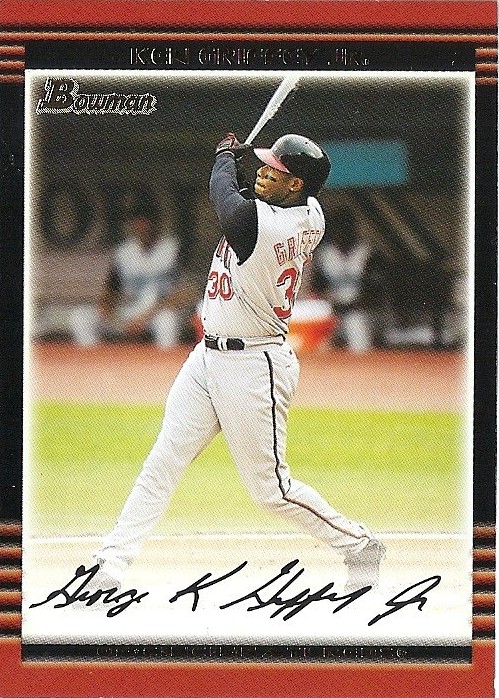 Here we have some simulated blinds in the background.  They moved the name to the top here, but everything remains centered in this set. 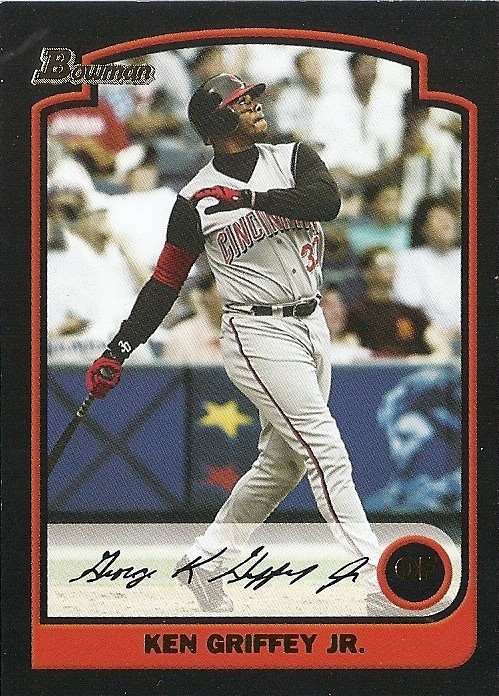 The photo here is shaped vaguely like a HOF plaque the border of which wraps around below to form the name plate.  One of the better designs of this period. 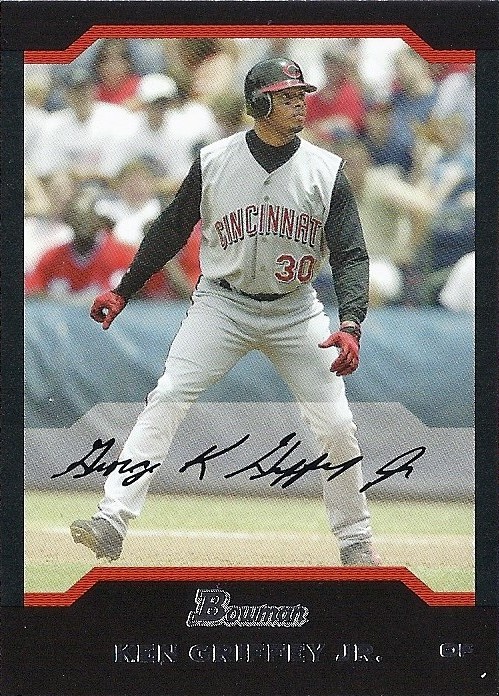 Everything is centered again here with angular top and bottom borders around the photo.  Simple as it is, I really like the name font on this card. 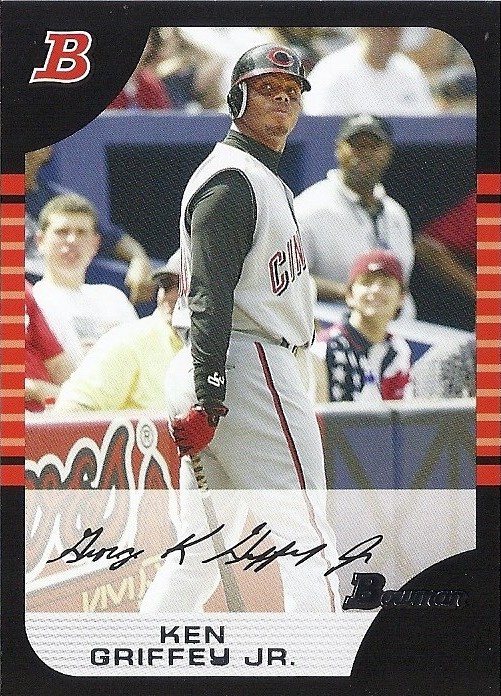 Perhaps the most radically different design of the ‘00s but still pretty ugly.  The rounded opposite corners are used awkwardly, and those red lines peeking from behind either side feel out of place.  A cluttered, unenjoyable card.  Awful, awful card. 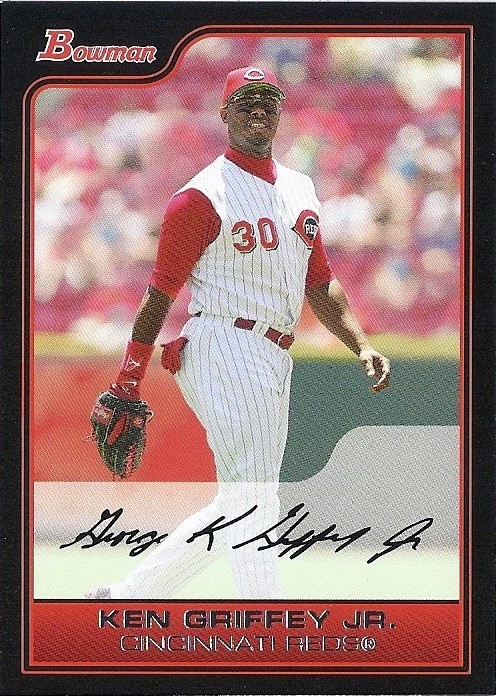 A step back into the right direction, this is a simple and attractive design.  The layered border looks great and the spot where it cuts in to accommodate the logo is balanced by a similar design in the autograph field. 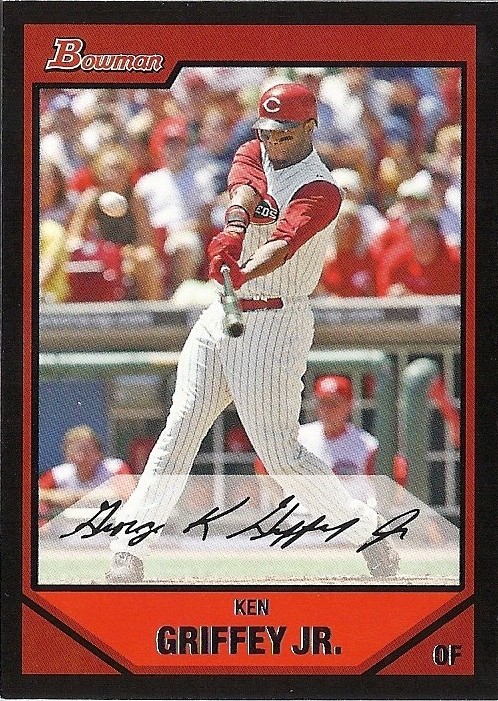 Okay, I’m really running out of ways to say the same things.  This is roughly the same design as last year but with the corners cut and more red.  Man, are these designs ever boring.  I hate this timeline. 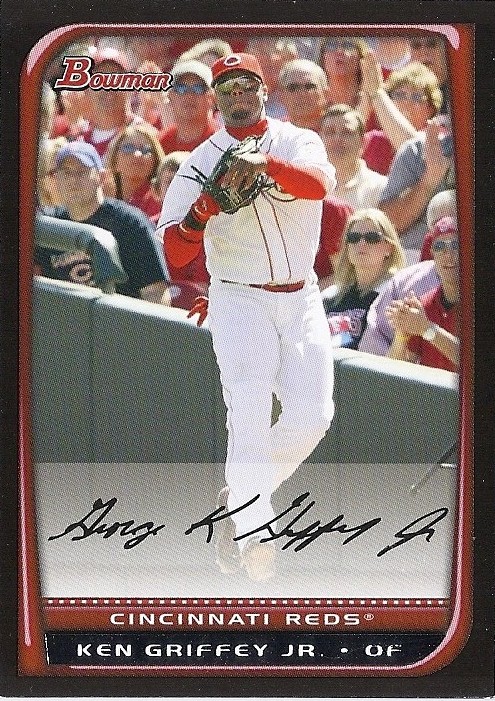 No foil and a border that’s bit more curvy and stylized.  The nameplate looks like movie film here.  And so on... 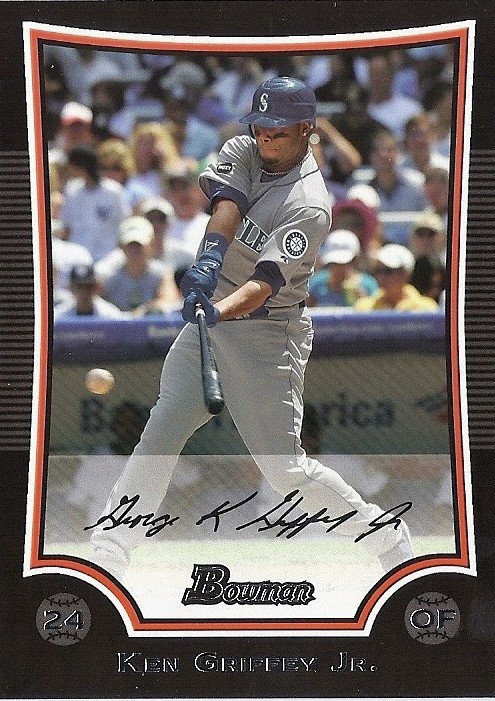 Another favorite.  The autograph field is offset by the horizontal lines in the background, I really dig the baseballs on either side displaying the number and position, and the hourglass shape reminds the card holder of a sexy lady.  It’s got a cool font, too.  This set is likeable and downright memorable. 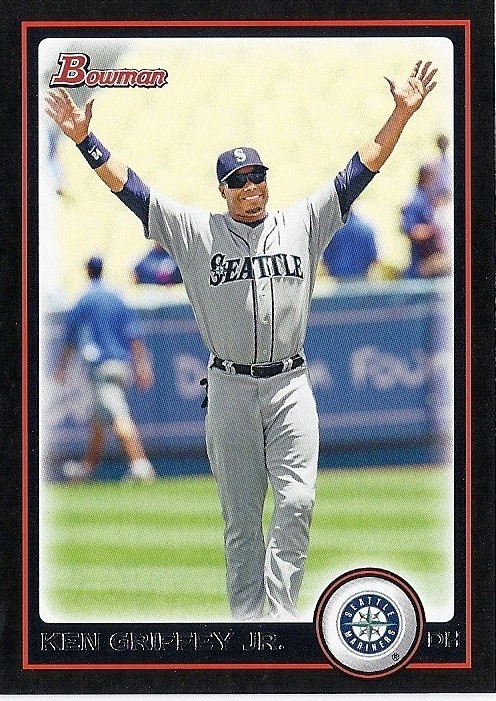 The first in 11 years with no printed signature, this set’s design is very simple.  The team logo looks great encircled on one side, and they nailed the border.  The more I look at this card, the more I like it.


Bowman continues to make lots of similar-looking cards with confusing numbers to this day.  Go buy a pack and feed the beast….


I guess you have to hand it to Bowman in that as they developed, their designs and themes became more uniform.  They never even changed their logo in all that time.  That stability is something you get from no other brand.  “Stability” - what a boring quality. 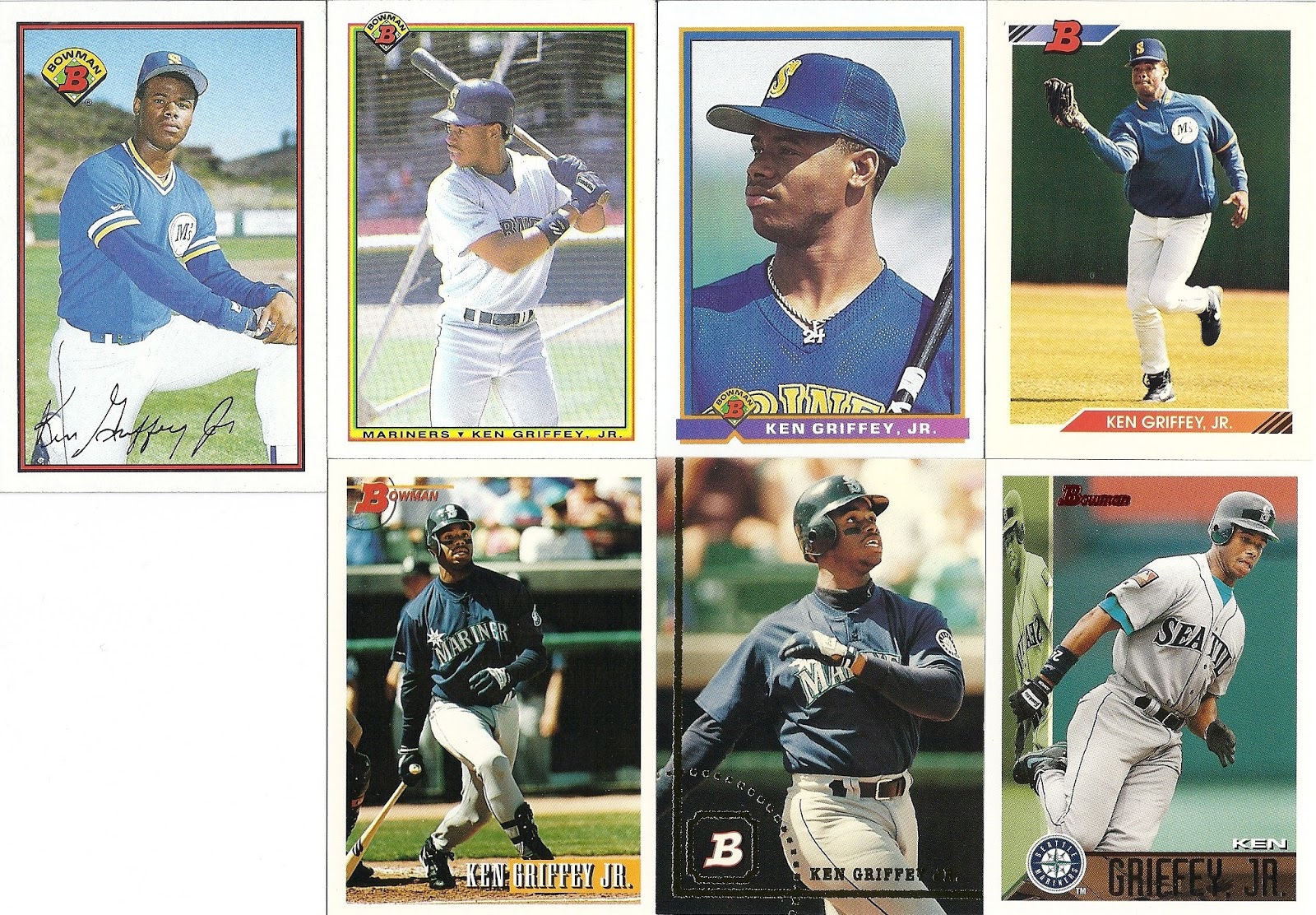 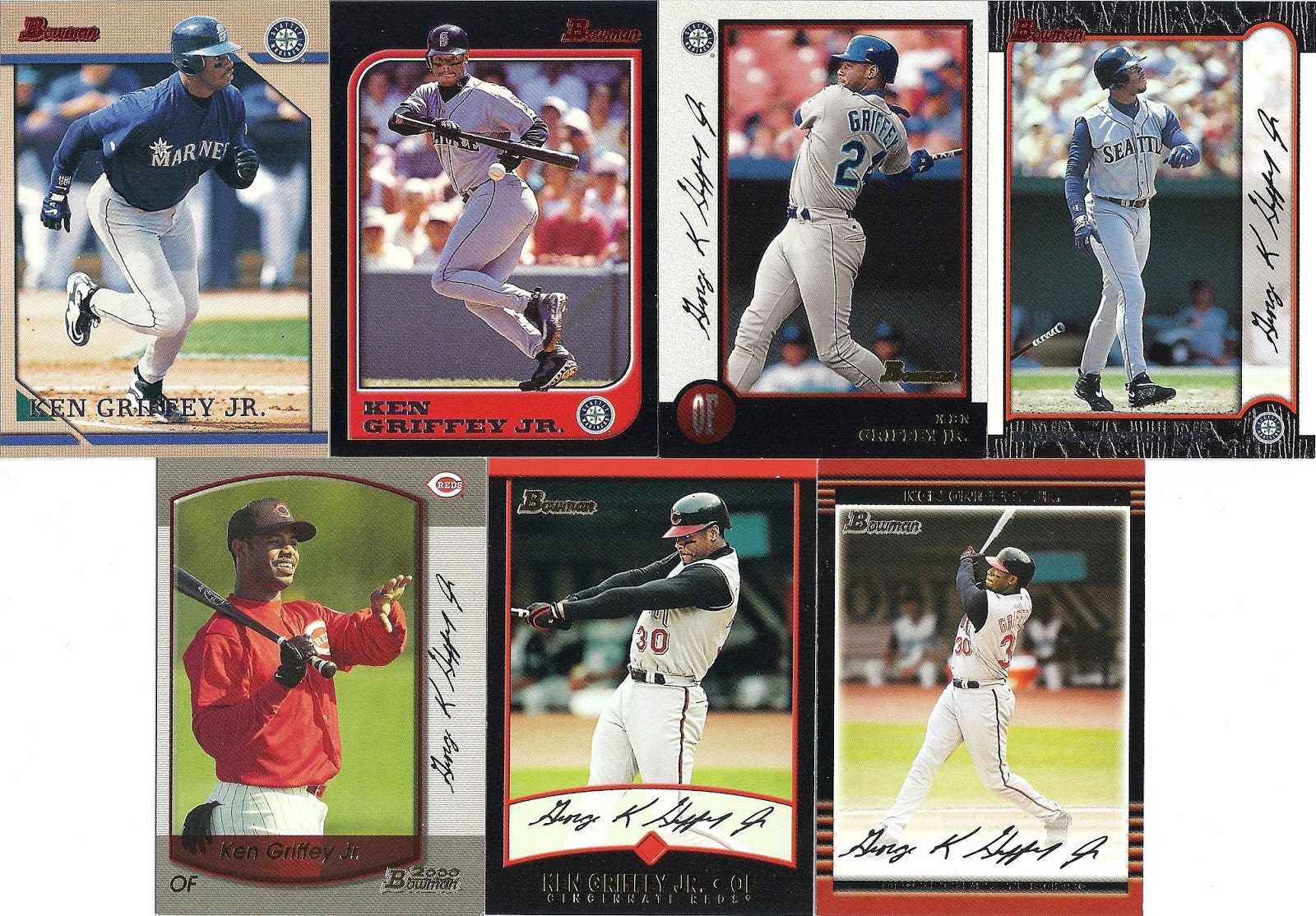 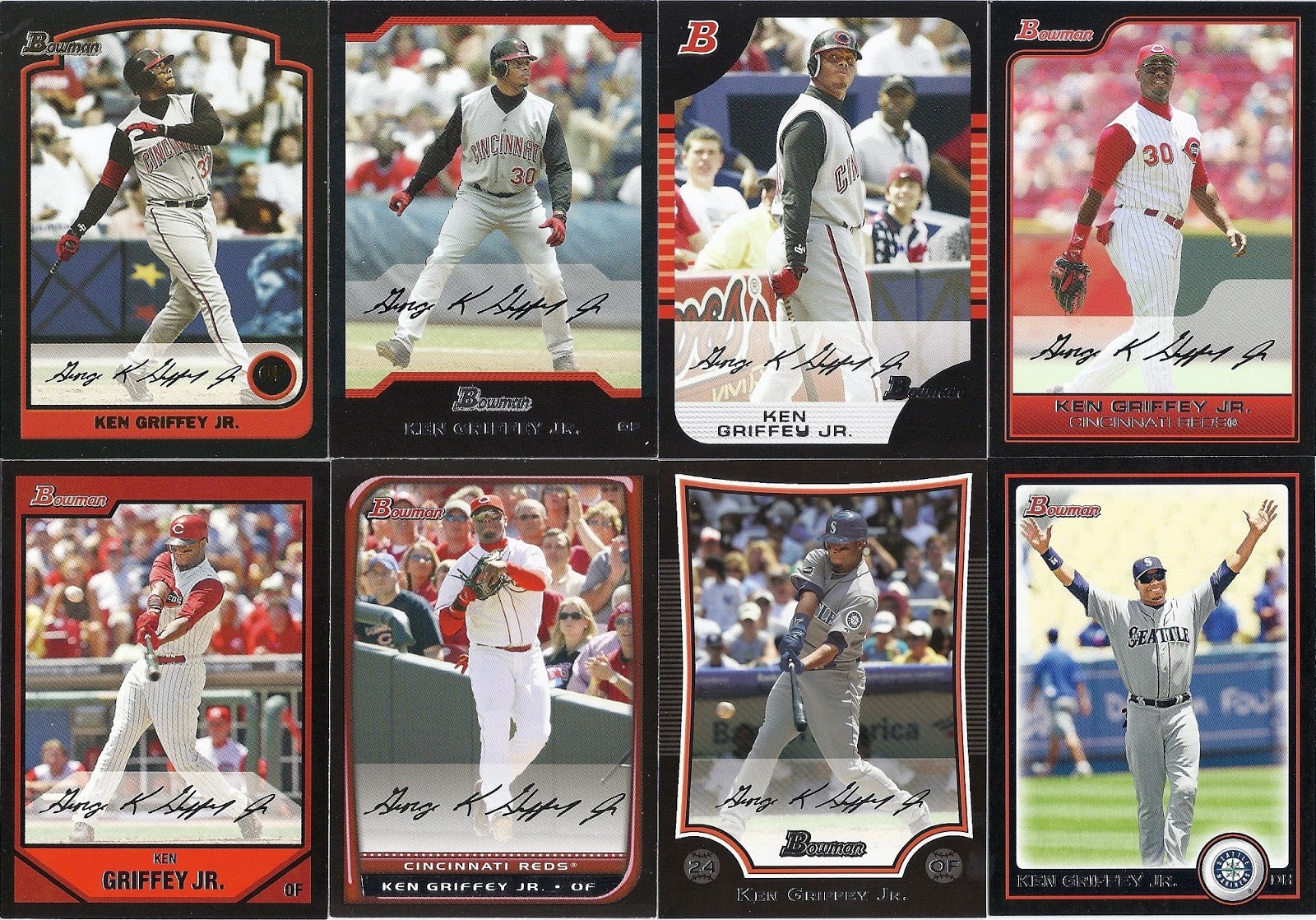