The Upper Deck timeline is special to this particular blog because it is perfectly synchronized with Griffey's career.  Both came out in 1989 to much acclaim, both had storybook 22-year runs filled with success, both had some controversy to deal with towards the end but remained beloved by fans, and both came to a quiet end in 2010.  Upper Deck also had a spokesman deal and exclusivity agreement with Griffey.

Their cards were always premium, their photography was always stellar, and their designs and ideas were always innovative.  They were the Joneses that other brands struggled to keep up with.

Here is every Upper Deck design by year: 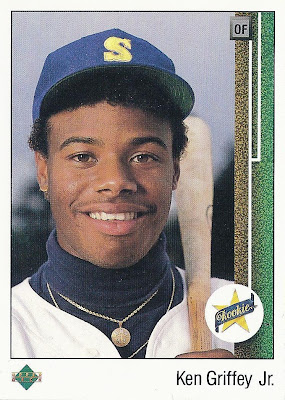 Arguably the most universally-recognized card design of the modern age and possibly of all time, the '89 design is built around a first base line with the player position appearing on the bag.  UD came out of the gate already on quality white card stock with a very light gloss finish; so while they still had room for improvement, they were always premium cards.  This set also had a really nice "Star Rookie" badge that was only around for the one set. 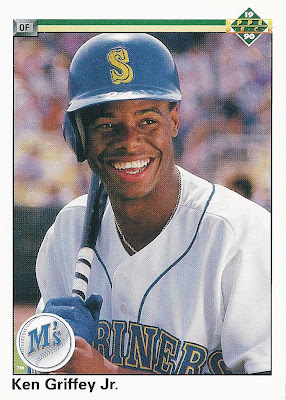 A simpler design than in the previous year, here we see the line from first to second base and the updated Upper Deck logo.  They kept the large, square photo with the name underneath in the white border, but this set lacks the flourish of the previous and following year's designs.  This is the plainest Upper Deck cards would get. 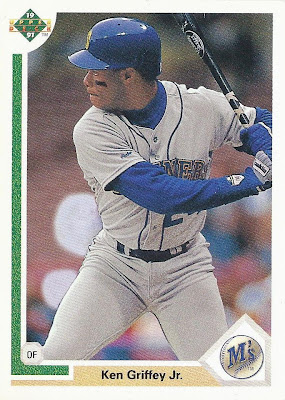 The concept of the base lines is completed with this design that features the path from second to third and third to home.  We get the team logo at home plate and we keep the player position on the bag.  This design is also among collector's favorites with it's great photography, attractive design, and impressive rookie checklist. 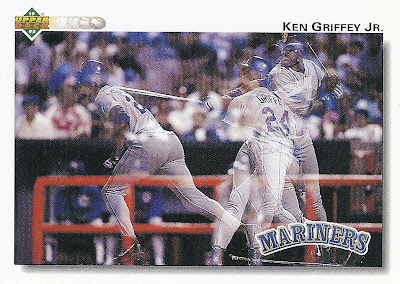 Upper Deck was known for its triple exposure shots that were first introduced in the '89 set.  Here we have a sweet quadruple exposure.  The shadow effect under the picture and the baseball coming from the logo keep things interesting. 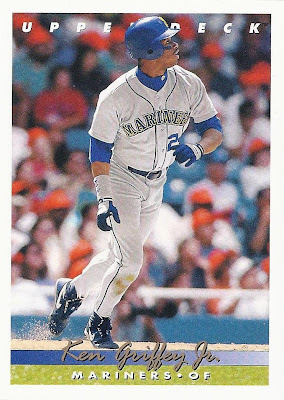 The glossiest yet, the '93 set is the most popular Upper Deck set of the 90's.  This was the only UD set not to feature the eponymous logo; but its bright, clean design and excellent photography really struck a chord with collectors.  This remains an extremely popular set among collectors to this day. 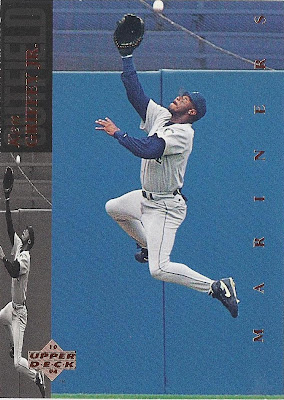 This is the year UD really pushed the design envelope with this modern offering.  No border at all, lots of foil on every card, that crazy smooshed black-and-white version of the main image.  These cards must have looked crazy in 1994.  Oh, did I mention that this set has amazing photography?  Check it out sometime.  That bronze-colored foil would become a staple of Upper Deck's designs for years. 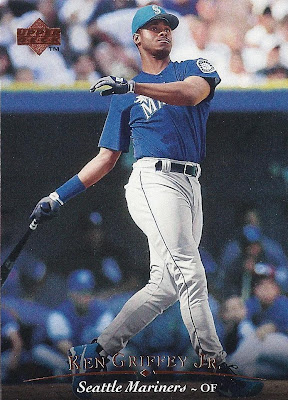 My favorite Upper Deck design of all time, '95 slanted classy.  This is the beginning of a movement towards designs that were at once modern and traditional.  Completely full-bleed for the first time, foiled-out name in a font that can be accurately described as pimp, a nice sense of balance, that hint of a dark fade towards the bottom - these cards looked great for any team and in any orientation, and again the photography was fantastic. 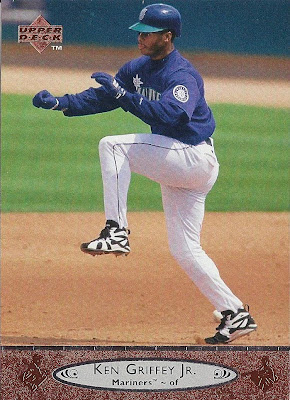 I would like to have been a fly on the wall at this set's design meeting over at Upper Deck HQ.  I'm willing to bet it was a heated debate the day they decided on a big field of orange foil with the name in an elongated oval with filigree on either side.  This one always confused me - I can't tell whether I despise the design or just plain don't like it.  Regardless of which is more accurate, the '96 design never sat well with me despite the large quantity of great cards in the set. 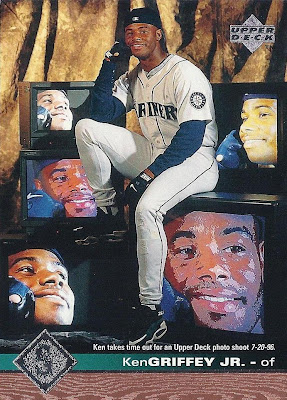 I think they had a bunch of orange foil left over from the previous year, but they added wood grain to this one.  You've got to admit it does look a lot better.  The name here is in a split-faded, color-appropriate line gilded in silver foil and offset by a nice team logo on the left.  They also added a caption for every picture in the set this year which is unfortunately something they did only once more then never again.  I'd love to see that element make a comeback.  The UD logo in the same foil as the team logo and in the opposing corner balances the card nicely.

At the time it came out I was not crazy about this set for it's similarity in orange foil to the 1996 design and the addition of the captions which I thought was clunky back then.  As I look at it today, I realize how awesome the design really was.  Plus, look at those old-ass CRT televisions.  I love when cards showcase old tech. 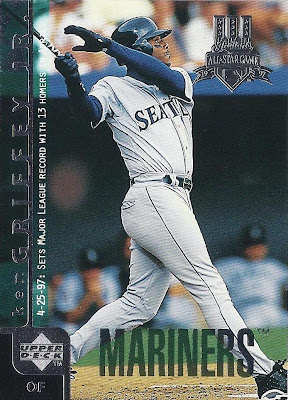 The last set that was around when I still collected, the '98 design was futuristic and cool.  Big ol' name plate along the side featuring a modern font and lots of silver detailing, a caption for every picture, a large team name, and more solid photography all made this set feel high-end and desireable. 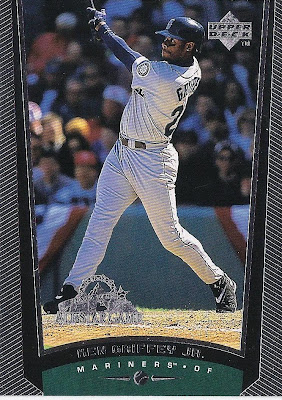 One of the most claustrophobic designs ever put to cardboard, this set makes kittens cry.  I just want to snip those two big wings running along the sides right off - without them this would be a halfway decent design with the curved nameplate, team color, and and cool foil baseball design.  Besides the not-horrible bottom-center section, the design here is terrible and makes miscuts super obvious.  Boo this man... 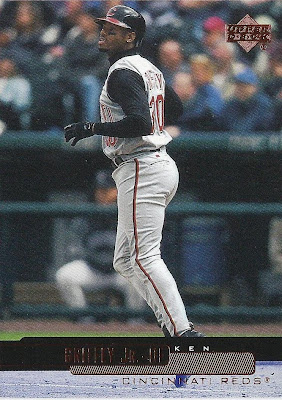 I'm normally against random boxes and lines with no purpose, but this doesn't look bad.  I think it's the slight color tint at the bottom and varying levels of shading in the boxes.  Not a lot to this design, but anything is an improvement on '99. 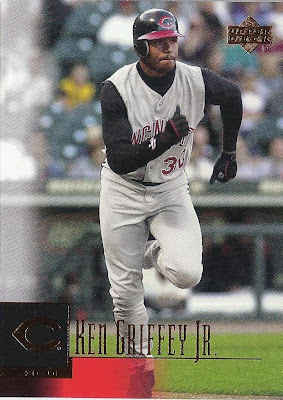 The last of Upper Deck's bronze age (of foil), here we have a nice elongated font alongside a team logo.  The most unique element of the design here is the use of team-appropriate color fades along the left edge and bottom.  I never noticed them until I got a good look at the card for this post, and at first I thought I was looking at glare from a bad scan.  Turns out this stupid white fade is on every base card.  Ick. 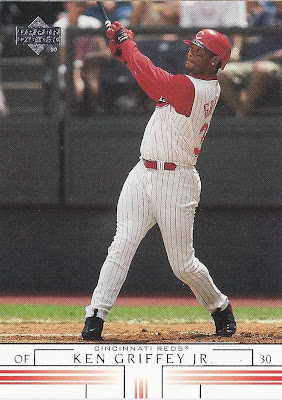 I call this the Navajo set because it's got a vaguely southwestern/Native American vibe to it.  I've got to admit it looks really good.  The lettering, the balance, the clean lines - this looks pretty good and translates well to horizontal layouts. 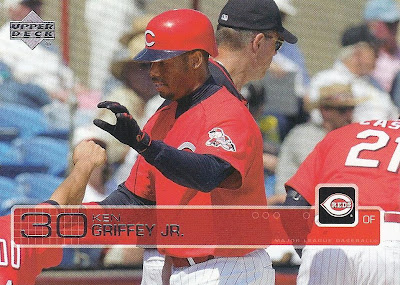 Meh.  Not bad, but nothing spectacular either.  That big-ass red box is a hair too high up on the card.  Frankly it would look better square in the middle of the card. 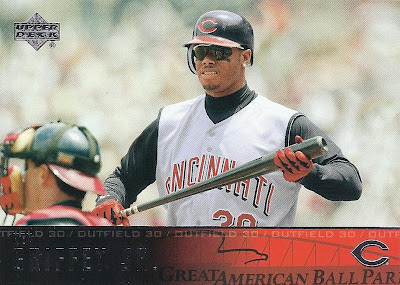 This year's base design looks more like a subset that showcases each team's ballpark.  I had this card for a long time without even realizing it was the base card.  I really like the concept of reflecting the team's home park, but here it seems like an afterthought that cheapens what is supposed to be a premium base set. 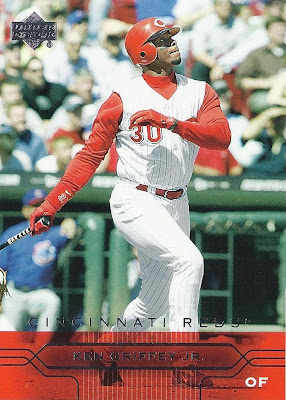 I like the name plate here, but it's so damn big.  Why did they make it so big?  Cut that in half and you'd have a good-looking card. 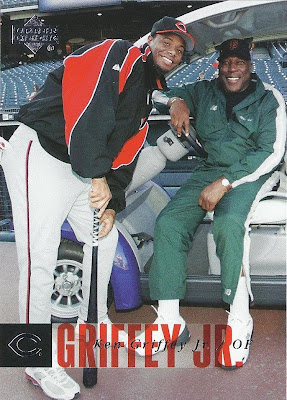 Finally - a good one.  I love this design, and it's not just because of the amazing picture on Griffey's card.  This is a return to what makes Upper Deck great to me: simple design + great photography = quality baseball card.  You don't have to go crazy and fill the layout with design for the sake of design.  You can just slap the team logo in a little black box and stick the guy's name on there.  The smaller foil name looks great, too.  As long as the photo quality is there, not cluttering the card up with stuff should be the goal. 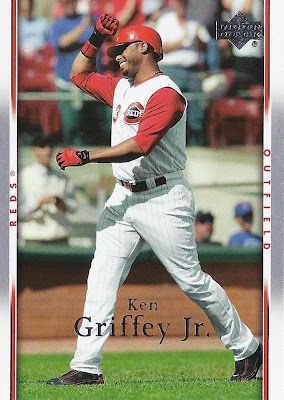 If this design was described to me I would assume it's another case of card claustrophobia, but the final product is a good-looking card.  The light colors keep the side bars from dominating the design, and they frame yet another year of solid photography quite well.  The centering of the name is also a big hit with me.  This looks even better in a horizontal layout as the bars then become the top and bottom of the card for a widescreen effect. 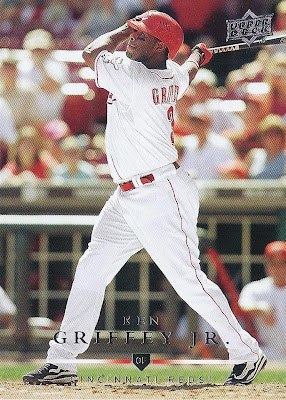 Look! a new Upper Deck logo.  This is almost the exact same design as the 1995 base set, so I love it.  If I'd never collected cards in my life and I had to pick a favorite set today, it would probably be this one (though my long history of love for the '95 set keeps me from changing my mind even now).  The perfect font and spacing, the position in the home plate with the team name below, the snazzy new foil logo - we have a real contender on our hands for best Upper Deck design. 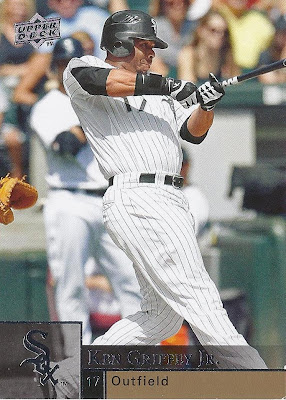 Nothing complicated here: everything gets its own box.  A clean, modern layout accented in silver.  Looks great. 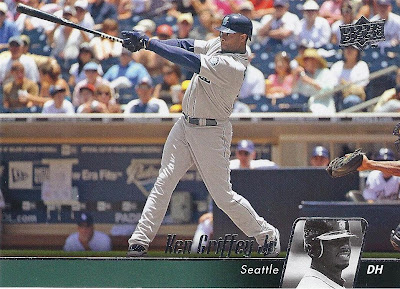 This design reminds me a lot of '96 Topps with the little slanted monochromatic portrait next to the name but accented in green instead of blue.  It was easy to get a sense of Upper Deck's impending doom just by thumbing through these cards.  The fun and unique photography was gone, replaced by standard action shots and even a few honest-to-goodness studio-base Glamour shots.  The design isn't bad, but I don't think anybody expected it would end this way much in the same way that nobody expected Griffey would call it quits just a few weeks into the season in 2010.


I'll admit that in my collecting days I was a much bigger fan of Upper Deck than Topps.  They always seemed to have their shit together more than any other brand.  Topps was the kid stuff and Upper Deck was the serious adult collector stuff.  Donruss and Leaf and Pinnacle and the Fleer brands all hung out in the middle of the spectrum, but Upper Deck were the cards you really wanted.  I'm sad to see them out of the market.  I wonder what they would be making today.

If they do ever make it back to baseball, a retrospective set would be a must.  Here's hoping....

Here is every Upper Deck base card design ever made: 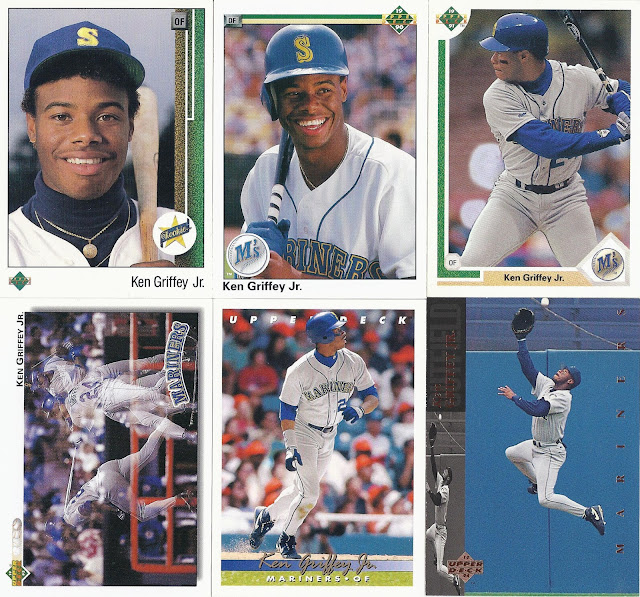 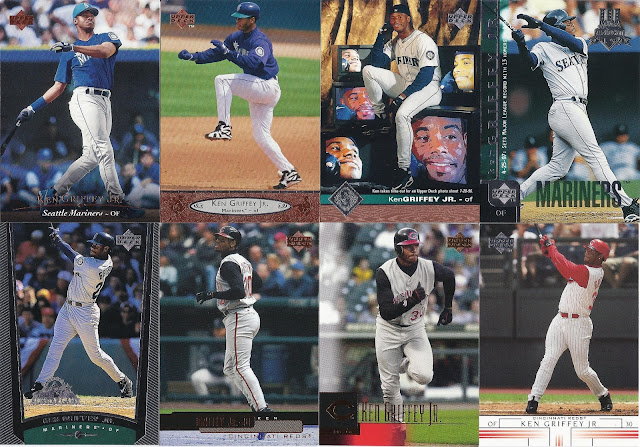 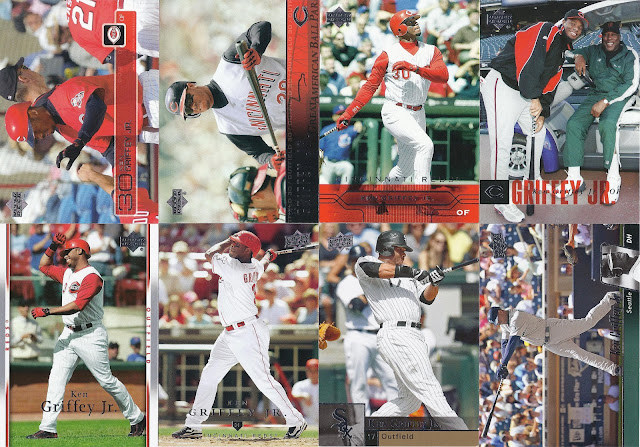 Posted by The Junior Junkie at 4:04 PM