Welcome to what may be the greatest of all the Design Timelines.


The secret to a great set is a great base card design and solid photography; and year over year, Stadium Club remained among the best-designed sets on the market.  There's not a single bad design in the bunch, and most of them are downright excellent.  They were always cutting-edge and fun as is evidenced by their cool inserts and parallels.  And the photography?  Fuhgeddaboudit.

I'm a huge proponent of this brand because I think the fusion of simple design and great photography has resulted in some of the best sets of the last 20 years.  You don't have to go nuts, adding and adding colors and lines and effects to make a great card.  Stadium Club as a brand proves that because none of their designs are particularly overbearing - quite the opposite: they tend to complement the photography without getting in the way.

Here is every Stadium Club base card design in order: 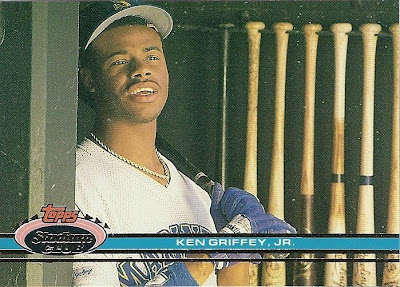 This was Topps' first "premium" set, and they pretty much nailed it.  Full-bleed from their very first set, '91 Stadium Club had a lot of first-time features.  The vivid, full-color backs featured images of each player's Topps rookie card as well as new stat configurations.  The photography was fantastic as was the checklist.  And did I mention it was the first mass-market brand to put foil on every card?  When it burst onto the scene, huge premiums were being charged for packs.  This thing was just a total beast. 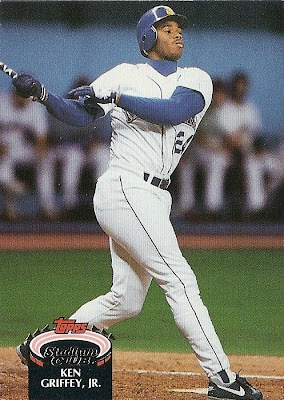 Topps knew they had some of the best photography in the game with this brand, and they flaunted it by putting a Kodak logo on boxes and packs and by designing with low-impact name plates so as not to interfere with the photograph.  This is the most extreme example of that low-impact design.  They might have gone a little too dry with this one: just a logo over a black bar and the player name.  I can't tell if they were being trailblazers or just lazy, but the photography in this set is good enough that it doesn't really matter. 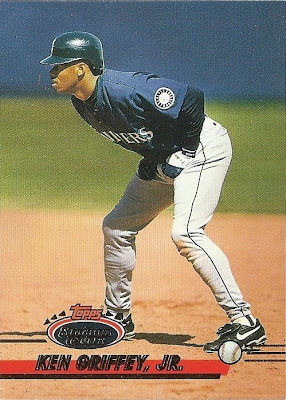 This sporty design is the first of my three favorite sequential Stadium Club designs.  Not a lot to it - just a red bar accented in gold and a little baseball with motion lines.  The exciting font is pressed right into the card in gold with black shading, and the SC logo hovers over the name plate majestically.  It's a simple design, but also a bold one that looks great with any team and in any orientation. 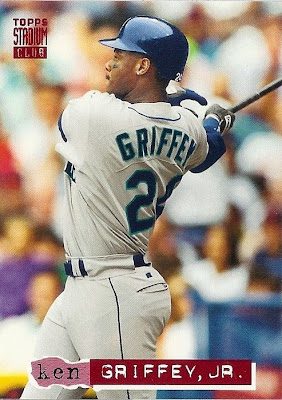 The label maker set.  This design seemed cool and gritty at first, then after a few years passed it started to seem hokey as the label maker was phased out of everyday life (my grandpa had one), but now I find it nostalgic and fun.  It's hard to naysay when a set has such great photos.  They focused on red again, and it turned out pretty awesome.  That new SC logo only lasted this one year. 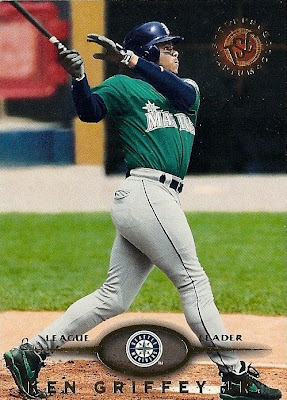 Another great-looking design, I remember these being slightly thicker than normal (am I imagining that?).  A nice, balanced design with yet another new SC logo design, this one revolves around that shape at the bottom containing the team logo.  The player name appears below in yet another bold, modern font.  Classy.  Another personal favorite. 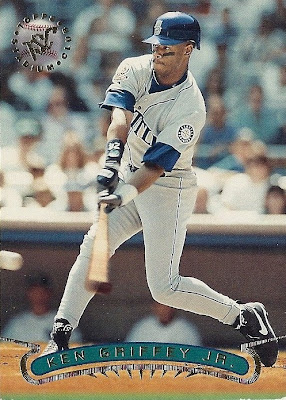 This design appears modern to the point of futuristic.  It's a simple curved color bar with the name stamped in foil and a single textured accent line.  In the future everything will have little spikes, so that's appropriate.  The baseball in the SC logo is also a nice touch. 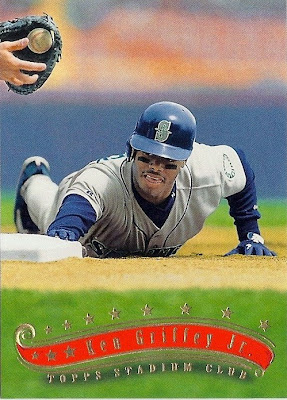 Check out the great Willy Wonka name plate.﻿  This year's design is fancy and whimsical with stars and matte gold filigree and that great spiral.  The color bar is raised with the player name imprinted in gold.  These came in red or blue, and they looked great either way.  The Matrix limited parallel is damn beautiful - it bothers me that I'll someday have to put it in my '97 Stadium Club set post, and I already know the scan won't do it justice.

Anyhoo, this is the first and last year the base card would not feature the latest Stadium Club logo.  They simply printed the brand below the name plate.  I'm not sure how I feel about that.  It's not as ugly as when someone's house address is spelled out in letters (old people are guilty of this a lot).  Normally I would prefer a logo, but the round TSC logo would look out of place on this card.  I guess they got it right. 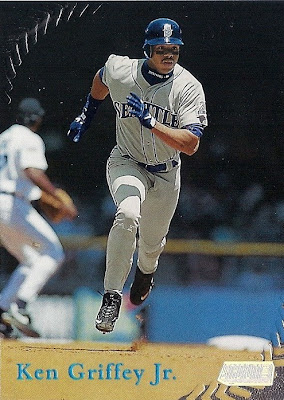 This is the first year of the "brick" logo that would last to the end of the brand and even it's attempted reintroduction.  Now, while I'm appreciative that Stadium Club never try and shove anything down our throats design-wise, a little embellishment can be fun.  Here they give us another year of stellar photography as well as a new logo in awesome holofoil and a shiny player name.  You can see the baseball stitch design on opposing corners, the bottom one containing some silver foil.  It's a reasonably cool card, right?

And yet, I can't help believing that they intended these cards to be enjoyed on a more tactile level.  The first thing you notice about this set is that the cards are a little thicker than normal and incredibly glossy - I mean like a seal that just hopped onto an ice floe and the water is still streaming down it's skin and it's all shiny and glisteny?  That glossy.  It looks like they applied several layers of glossiness to achieve this level of uber-gloss.  Moreover, the "stitched" corners are embossed, giving the feeling that the card was wrapped around a baseball to achieve the effect.  The result is a rich-feeling card that's a delight to handle.

Go find a '98 Stadium Club card and hold it in your hands.  It's the cardboard equivalent of petting a really soft bunny. 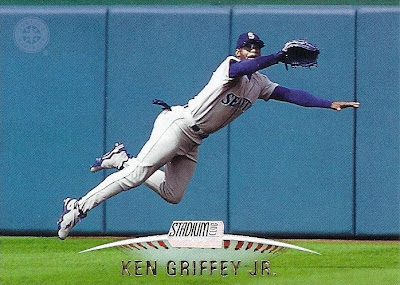 This one reminds me of another one of my favorite sets of all time: '95 Upper Deck.  It's a little more stylized with the cool baseball effect and the holofoil, but its still very similar.  The team logo is also shown in the top left corner in the lowest-impact fashion I've ever seen on a card.  The font is a bit plain, but overall this design embodies the spirit of non-interference combined with great photography that makes SC so likeable. 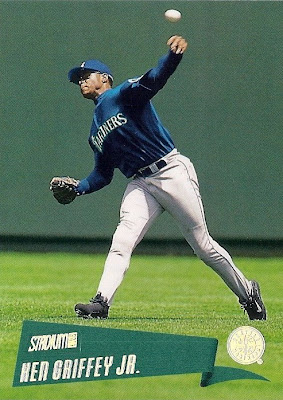 This year they went with a waving pennant in team colors sporting holofoil printing and team logo.  The font has been updated, too.  Simple, classy, fun, one of my favorites in the timeline.  Great base card. 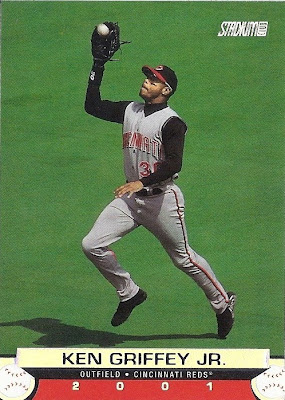 Only Ultra has more shots of Griffey fielding - it makes for some great pictures.  This is the only time they would ever take up the entire bottom border of a card, and I think they did it well.  Everything's centered, I love the date on the front, the name bar looks sweet in holofoil, and I'm a big fan of incorporating baseballs into the design.  Not as minimalist as some other years, but a fun design. 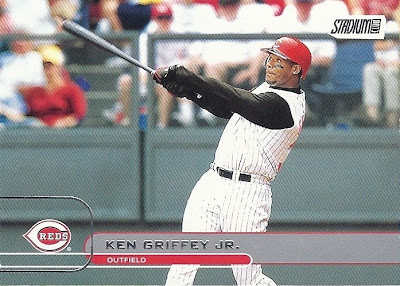 Again, could be more minimalist.  Every brand has that one set (some have more) wherein they go for that "modern" lines-and-shapes-for-the-sake-of-lines-and-shapes design.  This is Stadium Club's.  While not as indulgent as some other brands (Upper Deck went nuts with it in a lot of designs), this design still takes you out of the timeline.  It could have been a lot worse, and it's actually one of the better designs I've seen in that vein. 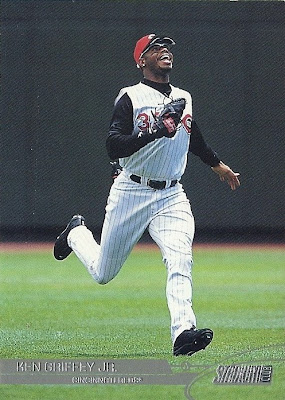 This feels more like a Stadium Club card.  Another one of their more muted designs, '03 sports a small, simple name plate and a logo set apart with semi-circles.  While the monochromatic, all-holofoil look is something to behold, a little more embellishment would have been appropriate, too.

And that was the last set in SC's continuous history.  They would disappear from shelves for a full five years before.... 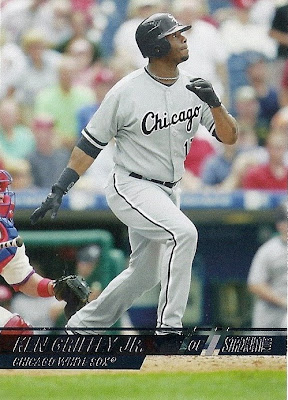 I love this design because it reminds me so much of the '93 design, and I love the '93 design.  It looks great with the team-appropriate color bars as opposed to 1993's all-red, but it's practically the same font.  Call me old-fashioned, but I'd like to have seen the little baseball make a comback here.  Fans of the original set would have gone nuts.

So what happened?  I wasn't collecting around the time this set came out, but if I had been I would have been very excited at the set's return.  Unfortunately it didn't do terribly well due to its having been remade into a completely different product by Topps.  I'll explore it more when I do an '08 Stadium Club post, but suffice it to say they screwed up what should have been an easy sell and now Stadium Club has gone the way of numerous crappier brands.  Prizm, however, remains widely available.


Bringing back Stadium Club seems like a no-brainer to me.  Topps owns it, right?  They have the MLB license, and they use it to make a half-dozen or so other brands that I don't buy.  Meanwhile this great brand with an awesome history is just sitting in the barn.  What is the holdup?

If you're looking for someone to spearhead the project, Topps, I'd like to throw my hat into the ring.  Who better than a seasoned collector with good taste and an appreciation for the brand's core aesthetic to help resurrect a classic set?  I am not kidding.  Let's make money together.

While I wait for Topps to blow up my e-mail, here's the complete timeline of Stadium Club card designs: 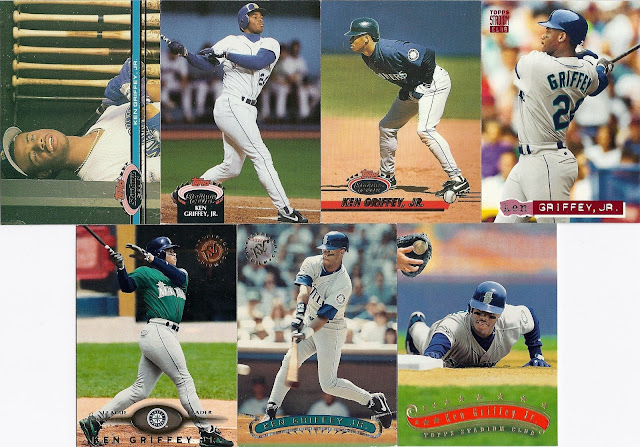 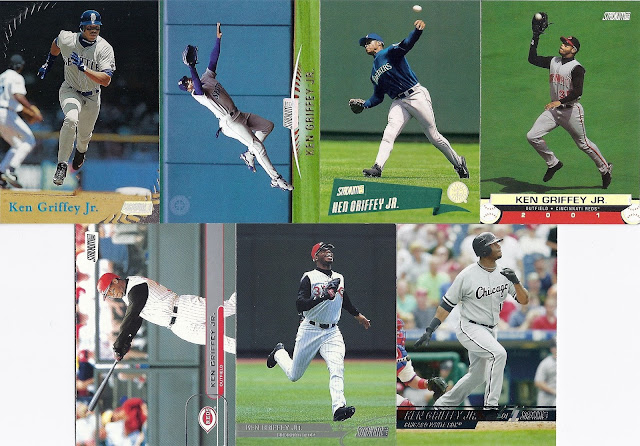