Score's premium offering only lasted eight years, but I remember really liking the brand for the most part.  Neat inserts and one of the coolest parallels in the market, Pinnacle was always a fun break.  I ended up buying a lot of packs in my day.

Pinnacle and I share a similar timeline, too: that is, it was only around the the years I collected.  Pinnacle began in 1992 when I was just starting to realize baseball cards exist.  The brand peaked when my own interest in the hobby was at its strongest, then it half-heartedly hobbled along for a couple years before fizzling out completely.  Our bell curves are comparable.

Here is every design by year of Pinnacle: 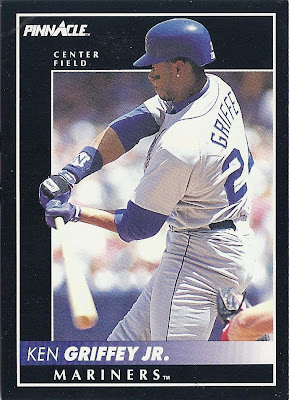 In its intro year it seemed Pinnacle had everything going for it: a cool name, a great design, and instant success in the market.  If you had to guess how well a brand would do by their first set, most collectors would say that Pinnacle was going to be a major player.  They were the first major-brand black-bordered cards since '71 Topps, but these were less prone to damage due to better card stock.  Apart from that the design is modern and eye-grabbing.  The black makes what colors are there pop as does the overlap of the player's silhouette over the black inner border.  A universally-appreciated set in general. 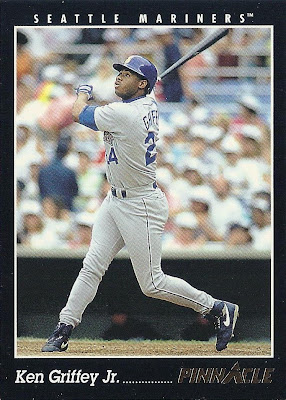 A lot of people love this set, too.  I'm not crazy about it.  I find it generic and plain, especially compared with other Pinnacle sets.  The gold foil brand logo is neat, I guess, and I do like how the picture (which is awesome) is completely unencumbered by logos and text.  Other than that, zzzzzzzzzzzzzzzzz.... 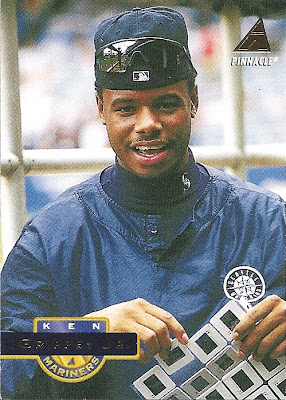 This was their first full-bleed issue, and it is another collector favorite.  The unique name plate in gold foil, the gloss, the great photography - it all came together to make the '94 set a hit to this day.  This is also the year Pinnacle incorporated the Dufex printing process into their Museum Collection parallel for the first time - and it looked good. 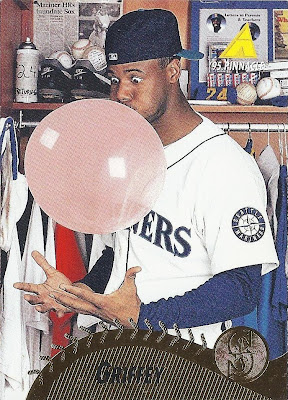 I know a lot of folks are going to disagree with me here, but I think this is the greatest Pinnacle set of all time.  Lots of creatively-used gold foil, a ton of excellent photography (check out the Ozzie Smith base card sometime), the last-name-only style of name plate.  I dig it all.  Plus I love it when foil is textured to make designs and pictures as was done in the team logo here.  And did I mention that the picture on this card is also my Blogger avatar? 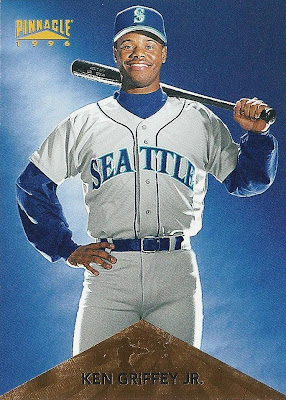 Check out this heroic Glamour shot.  This set took the whole foil-texturing thing to a new level, depicting a batter slamming a ball so hard it creates big lines of force emanating from the point of impact.  Kaboosh!  Triangle of power, Zelda-style.  There are also some horizontally-oriented cards in this set that keep the gold triangle hypotenuse on the short-side but show the name vertically.  They look awkward.  Despite those, the set is solid. 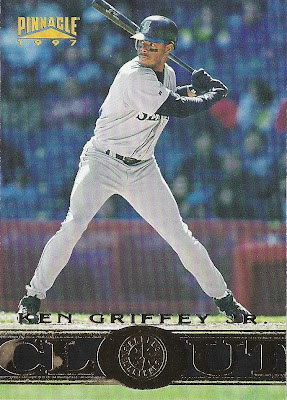 In 1997 the base set design kept the gold triangles but added the element of a field of small letters that spelled out words related to the player's team.  Mariners players had words like "Kingdome," "Seattle," and even "Junior" buried in their word fields.  Regardless of how neat this sounds, the design comes across as clunky and kind of U-G-L-Y it ain't got no alibi, it's ugly.  Yeah, yeah, it's ugly.

Of course you don't see that here because Pinnacle did not make a regular base card for a number of players who had been slated for Series 2.  Then Pinnacle put the kibosh on Series 2 and instead released a spinoff set which Baseballcardpedia calls "New Pinnacle."  Hence this Clout subset card is the only regular Pinnacle base card Griffey would get this year, not counting the spinoff set (I don't count the spinoff set).  Its design is OK for a subset, and a damn masterpiece when compared to that of the base set. 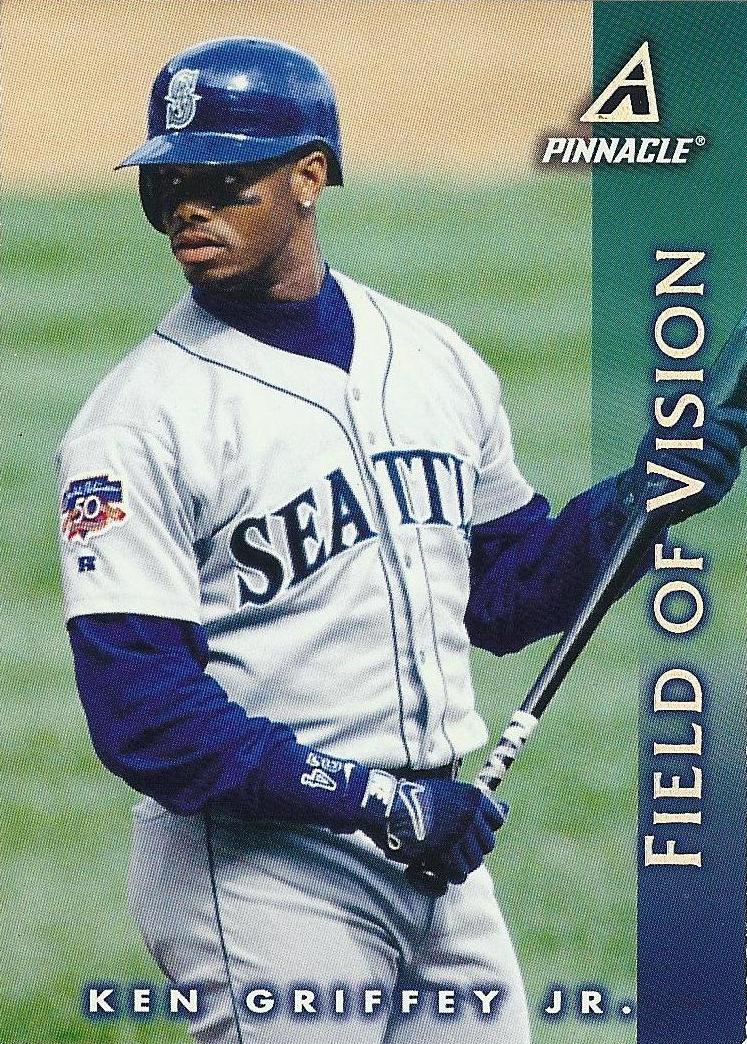 This year Griffey got two subsets and no base cards in the 200-card set.  The closest to a base card I have to show you is his Field of Vision card because, with the exception of Derek Jeter, every player who got a Field of Vision card was omitted from the base set.  That list includes the likes of Frank Thomas, Roger Clemens and Cal Ripken.  I can't seem to find any reason for why they did it that way.  It's a great looking card and everything, but why?  For the second year in a row, there's not a single regular Pinnacle base card with Griffey's previous year stats.

For the record, I really liked the base design of '98 Pinnacle.  Full-bleed, small name vertical along the right edge in holofoil, nice printing and photography - It was a great set.  I wish there had been a Griffey in it.

Thus Pinnacle's short but prolific run came to an end with this set.


1998 was the last year of any Score, Select, and Pinnacle product which included all the brands' flagship sets and six spinoffs.  These guys made a lot of cool cards in the 90's - I'd like to see someone make an Archives-style set that covers all the designs from this family of brands.  I'd buy tons of that stuff.

Here's all seven base designs from every year of Pinnacle. 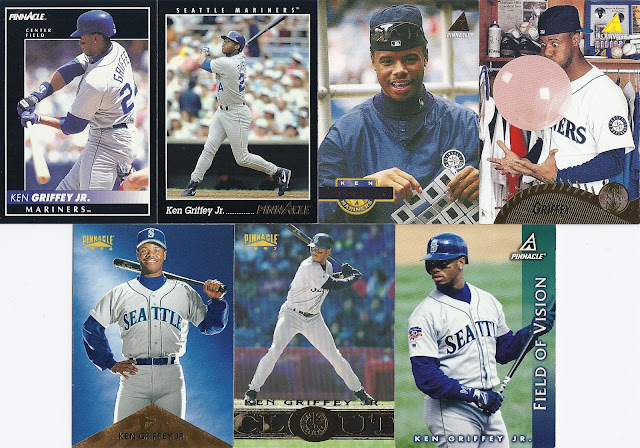