Collector's Choice remains well-represented among the proletariat collectors out there - the regular guys who love the smell of wax and cards with cool pictures on them no matter how overproduced.  You won't find any fancy-fants, bourgeoisie, $50-autograph-pack-busting supercollectors hoarding Fred McGriff gold signatures.  They're chasing Babe Ruth bat relics while we're having have all the fun.

This more affordable offering from Upper Deck won a lot of fans right from the get-go.  For around a buck you got subsets and checklists that were cool and well-designed plus two of the greatest and most memorable parallels ever conceived: the silver and gold signatures.  This set also gave us the unique You Crash the Game interactive insert which was a cousin of Upper Deck's popular Predictor cards.

Here's every design by year of Collector's Choice and UD Choice: 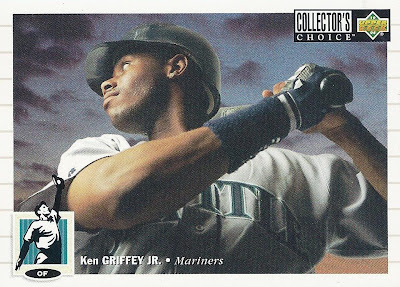 Released in two series, the inaugural set featured pinstriped white borders with a little baseball dude in the bottom corner.   The name is very small at the bottom and doesn't interfere with the great photography of this set.  For an entry-level brand in the card market, Collector's Choice looked fantastic.  Check out that awesome picture - this does not look like the photographer was told, "This is gonna be a buck a pack, Frank.  Just go snap something reasonably good and we'll slap it onto some cardboard."  It looks skillful and epic.  Hell of a start, Collector's Choice. 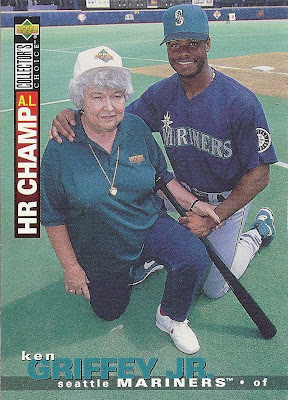 The base set this year had white borders with a light shadow effect around the edge of the photographs, but for All-Stars and players who stood out among the rest, Upper Deck went full-bleed.  The same design would also be used in Collector's Choice SE that year but with blue borders and no full-bleeds.  It was released in a "single series" with redemption cards for updates seeded into packs.

Homegirl there won a contest from the '94 set to be on Junior's '95 card, and here she is.  Despite the occasional old lady, this set had some great action photography and a lot of soul.  Plus, '90's fonts! 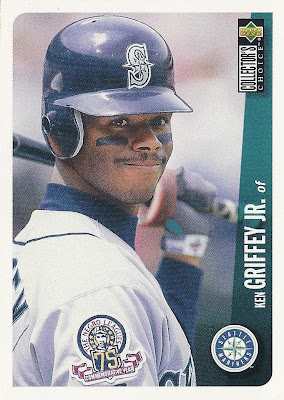 Keeping it simple with a color field along the long side and a team logo.  This worked well because (with the exception of the team logo) they didn't have to change the orientation of the design elements for horizontal cards.  Junior didn't get the borderless treatment in '96 despite making the All-Star team (and not starting), but Collector's Choice more than made up for it with this great portrait of Griffey sporting his 75th Anniversary of the Negro Leagues patch.   On top of that they also had a great 10-card insert of Griffey die-cut cards. 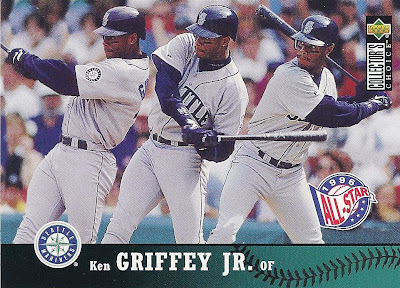 This year they made borderless cards for all kinds of dudes including rookies and even some non-All-Stars like Brian Jordan and Jay Buhner.  I'm not sure the criteria for having your border removed - I think they just had to like you.  Griffey got a cool card again, a kind of digital mock-up of a triple exposure card.

My only complaint this year is that they did away with the silver and gold signature parallels.  I still can't believe it - that was the greatest thing about this set: lots of cards for cheap and silver signatures in every pack.  It would only be downhill from here for ol' Collector's Choice.

You may claim that I cannot place the blame for the failure of an entire brand on such a small thing as a change to the parallel;  To that I say, "Yes I can." 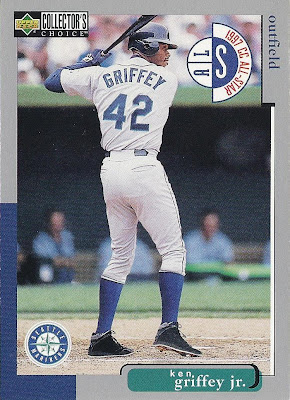 I think this looks like a Score card, but the picture is awesome.  Can you spot why?  If not, you're a bad baseball fan.  All the base cards in this set have white borders except those on the stars' cards which are silver.  I find this design a little more generic than in previous years, and that "CC All-Star" logo confuses me.  The colors are good and the layout isn't horrible, but I'm just not wild about this one. 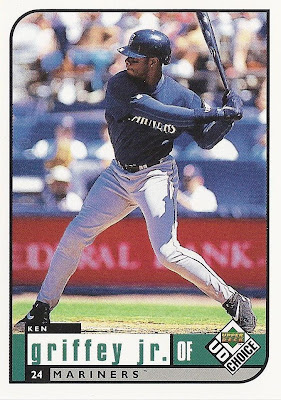 Brand failing?  Don't do anything rash like bring back the component that helped make it successful in the first place - just change the name.  Maybe I'm just being petty.

The design here is actually really cool.  I tend to be against random boxes and lines, but all these seem to have a purpose and a place in the layout.  The opposing sharp and rounded corners frame the card well.  Upper Deck kept the black and white logo, an homage to that of its predecessor, and even the name font is very Collector's Choice-y.

All the previous Griffey base cards from this group had great pictures full of uniqueness and fun little winks to the collector, but this is just a cool action photo.  No compaints, I guess, but while still completely awesome this is the least awesome picture in the timeline.  And that's where it ends....

I bought a ton of CC from '95 through '97, and the contents of my collection prove that.  I also just recently did a box break of '95 CC that was a really fun half hour of nostalgia.

If Upper Deck ever gets its license back, I hope they make an updated set ful of throwback cards to the '94-'97 era with lots of signatures of varying color foil.

Here's the short but sweet Collector's Choice Timeline in its entirety: 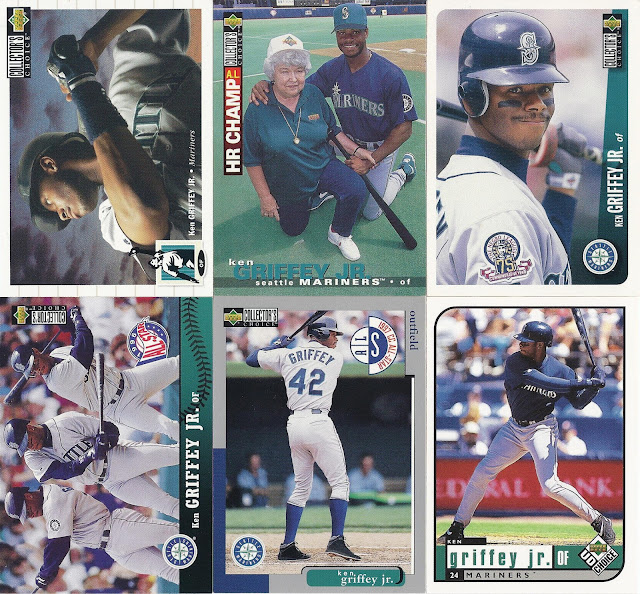