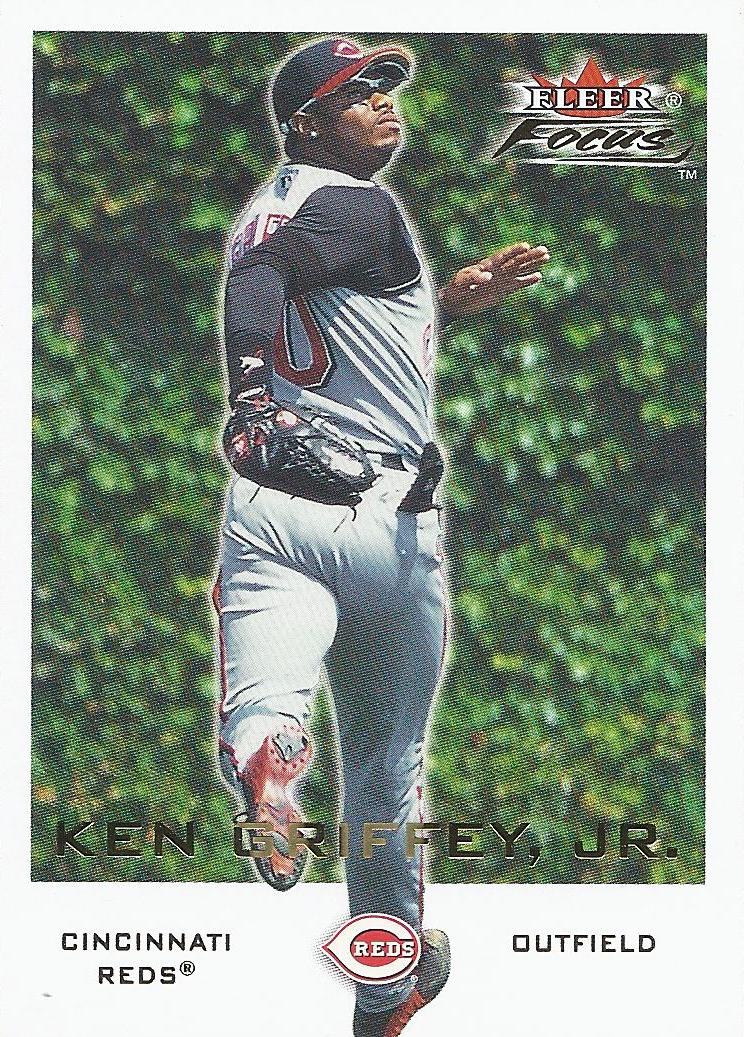 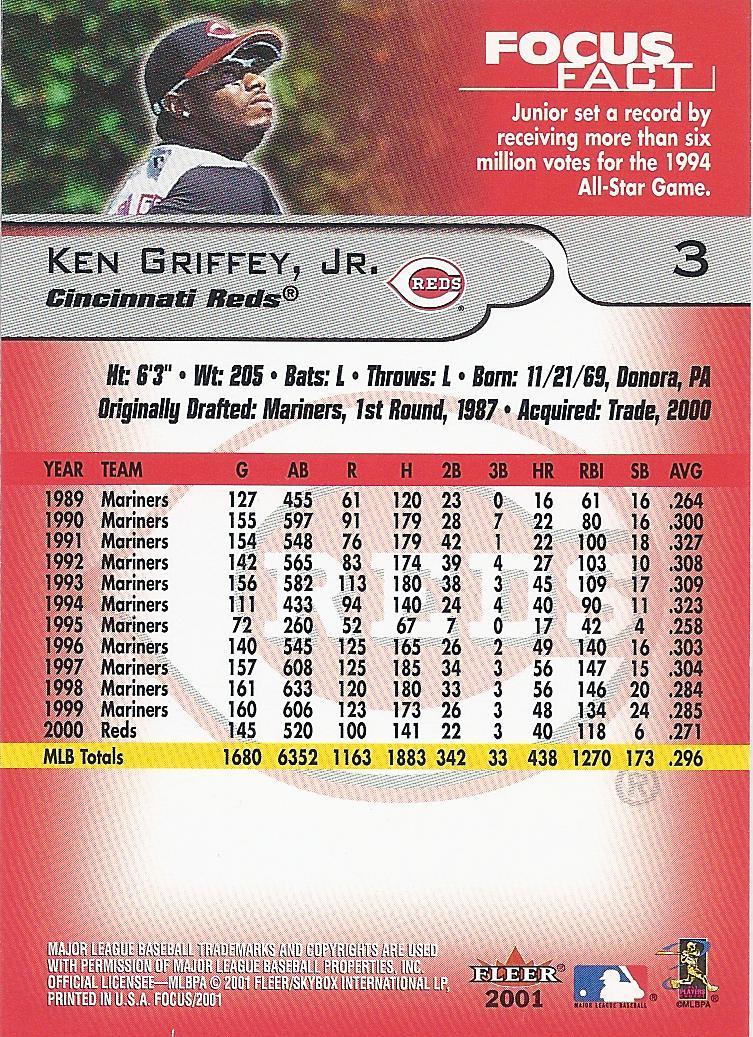 In my collection: 4 base, 1 Bat Company

Is this a good Griffey card? Yes.  It's a set that makes innovative use of card texture right in the design.

The set: Fleer made way too many sets in 2001.  They ran the spectrum from inexpensive to premium, modern to throwback designs, glossy and not glossy, patches, relics, and cross-brand inserts like Autographics that were available in more than one kind of Fleer pack.  Maybe it was the failure of Donruss that made them suddenly so much more prolific, but when flipping through my Griffeys of the early-to-mid 2000's its amazing how many cards Fleer put out.

There used to be a car company called Packard whose slogan was "Ask the man who owns one."  This is especially true of this set.  The cards need to be physically held to get the full effect.

At first glance there doesn't seem to be any comparative advantage here, and it doesn't come across as specifically-themed enough to merit being it's own set.  Let's look at the name: Focus.  It suggests a second look at the set photography which is mostly just standard action shots (though some are unique, they're not enough to merit naming the set after).  Perhaps it was there to fill a price point....

All that thinking changes when you hold a Fleer Focus card in your hand.  First you realize that they are quite thick, printed on nice paper stock, and have just enough gold foil to keep the design tasteful and modern.  Then it dawns on you that the entire card is a smooth matte texture except for the image of the player who is printed in high-gloss.  It must be the effect of this combination of textures that gives the set its name.

The final product is a unique set of cards that look and feel more premium than a scan can do them justice for.  While fishing for images of this set online I was unimpressed, but when I started digging the cards out to do the scans I realized my boneheadedness and re-wrote the majority of this post.
Fleer Focus was made in 2000 and 2001, then rebranded as Fleer Focus Jersey Edition for 2002 and 2003.
Voici le Griffey:

Here's the Kid chasing down a pop fly, and my money's on the Gold Glove winner.  The slightly-blurry green backdrop of the outfield wall sets off the action in the foreground perfectly.  Do you find yourself focusing on the Kid when you look at this card?  Mm-hmm.  See what they did there?

The ratio of cards showing Junior fielding versus batting is low, so this is a welcome image.  Fleer and their Ultra brand seem to show more fielding on their Griffey base cards than any other brands out there. 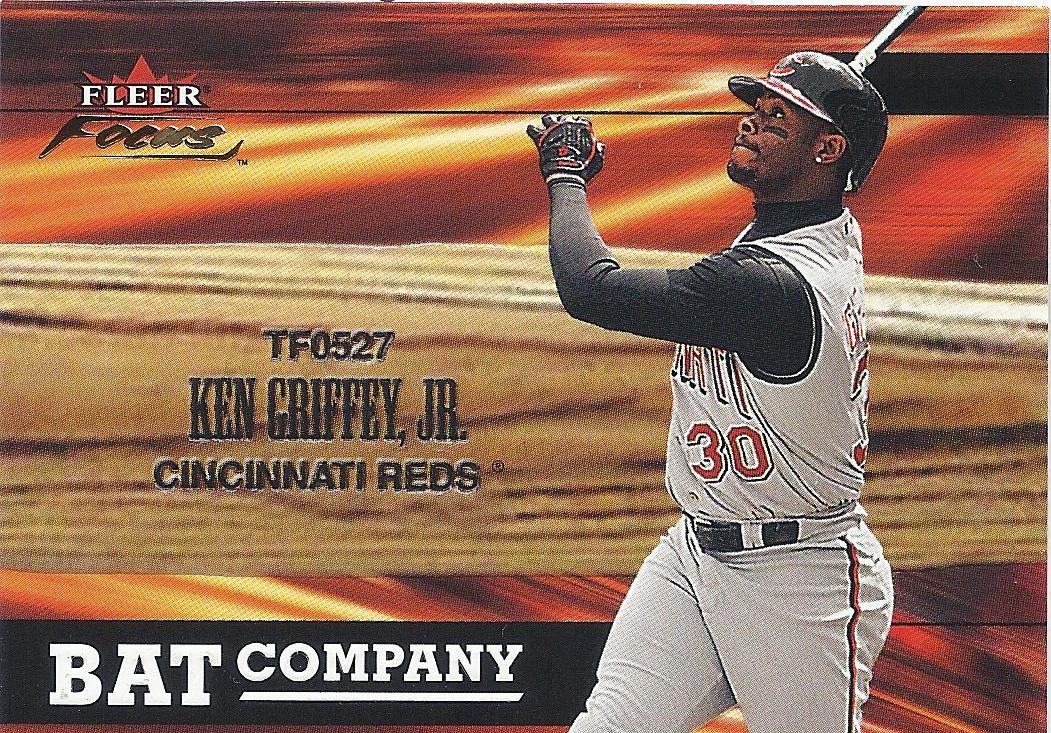 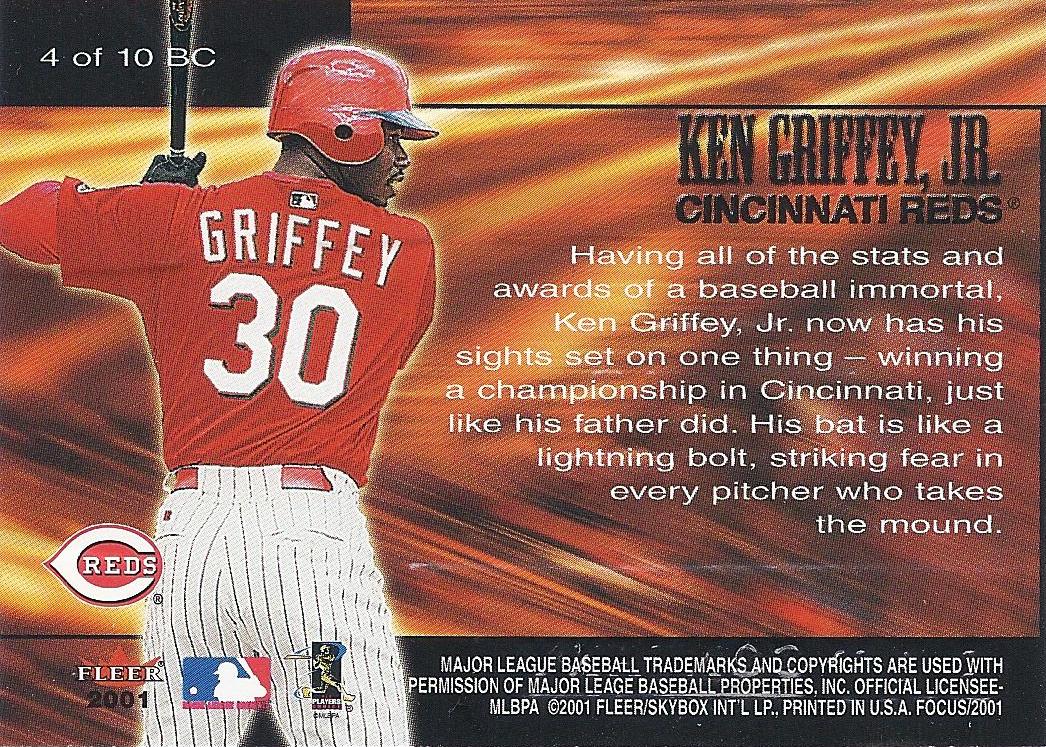 Even the inserts have a tactile allure that is rarely expoited in card design.  The embossing on this thing is thick and bold like a good barbecue sauce - you can see the imprint of the front images in the back of card.  Griffey's silhouette is raised and flat, but the bat barrel has a slight roundedness to it.  A good-looking insert in general.

The blurb on this card was written when Junior had just spent his first season with Cincy, and a decent season it was - his seventh reaching 40 HR and his eighth breaking 100 RBI.  Sadly there would be some injury issues over the following few seasons and no championship for the Reds during Junior's tenure there.  It's OK, though, as he'll be a first-ballot Hall of Famer very soon.

Here are the Griffeys I need from 2001 Fleer Focus:

Focus is an ironic name for this set as a blind person allowed to touch the card might get more enjoyment out of it than a sighted person who only has access to images.  Check it out if you get a chance.
Posted by The Junior Junkie at 11:44 AM