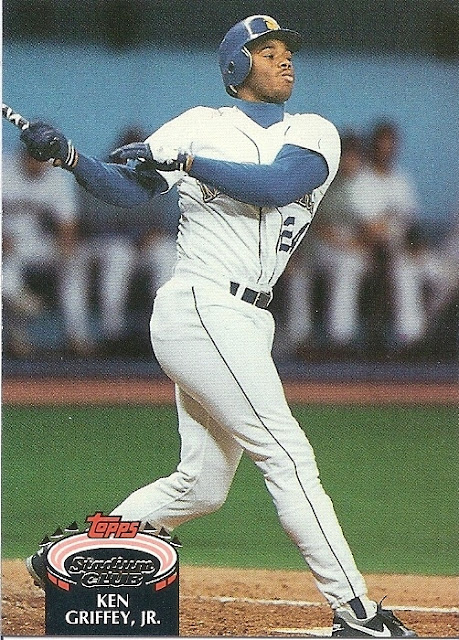 In my collection: 8 regular, 8 Members Choice, 1 Members Only, 1 Master Photo

Griffey looks: like he swung at a high one

Is this a good Griffey card? Yes.  A unique photo of the Kid from a high-quality though relatively unsung set.

The set: 1992 Stadium Club is the idiot savant of baseball card sets.  Excellent photography and great quality make these impeccable cards, but they are very bland and lacking in personality.

A behemoth at 900 cards and three series, the set features a more stripped-down design than any other year the brand was made.  The fronts consist of full-bleed photos and the Stadium Club logo above a black field containing the player's name in plain white font.  That's it.

Perhaps they wanted collectors to focus more on the high-end photography because the result is a somewhat boring design that lets the photography characterize the card pretty much entirely.  After all, when I think of '92 Stadium Club, I do think of the photo on that Griffey card.  And they did manage to include that Kodak logo on the box again.

Yes, Kodak, we get it - the pictures are awesome.  But where is the personality?  I think this is the reason no Topps brand would ever feature such a bare-bones design ever again.

I learned last night while doing my scans that I don't have a lot of '92 SC.  My guess is that I found it boring when I was a wee lad.  To a 12-year old it was all about eye-catching color and gaudiness - I was still buying late-80's wax packs at this point (they were cheaper).  Now that I'm older I can look at this set and see the value.  I perused images online of various cards from this set (I recommend you do the same) and the photography fills the spectrum from playful and unique to dramatic and personal.  This is a set made for adults.  While the kids were buying up packs of overdesigned cards with colorful borders and giant names, Stadium Club was keeping it light while setting a new standard for excellent photography.

Here is my only non-Griffey '92 Stadium Club card: 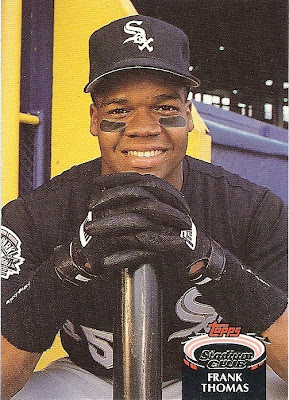 Below you will see a few other '92 SC cards that aren't so scant and that feature some of the design elements of the previous (and following) year.

See?  The overall aesthetic of the card is dictated entirely by the full-bleed photograph - any additional elements are tucked away in the corner and practically ignorable.  While it could be argued to be a bit boring, this is actually a very pure baseball card.

Based on the angle of his arms I think he swung at a high one which I also used to do....back in little league!  Ooh, want some salve for that savage burn, Junior?  Naw, in actuality he probably just lined it over second and won the game (and our hearts).

A bit bored by the base set design?  Stadium Club has you covered: 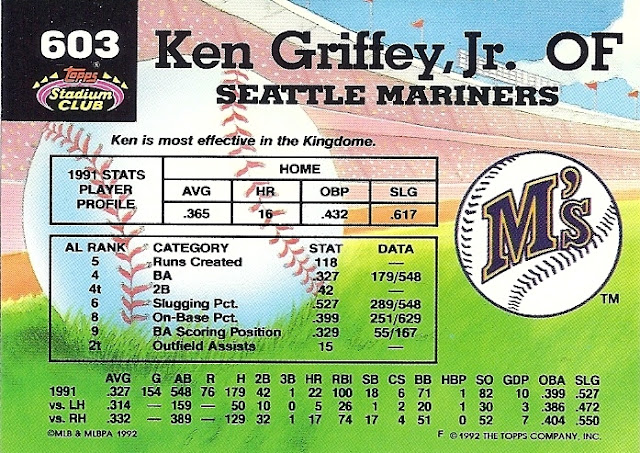 Here we see a return of the horizontal lines from '91 printed in the same sparkly holofoil that would also appear in a Stadium Club subset in 1993 and the parallel of the 1994 set.  We also have a classic Junior pose: deep focus, black bat, backwards cap.  Griffey appears in this subset because he is one of 20 players chosen by Stadium Club members.

The backs of the two base set cards feature the same gigantic cartoon baseball: 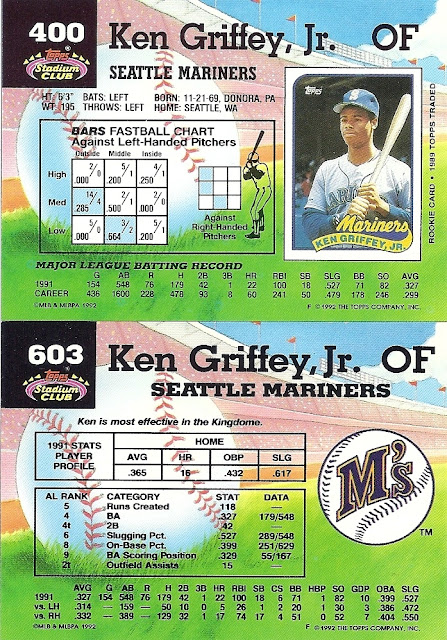 The stats given on the primary base card are similar to those from '91, but the Member's Choice subset card highlights Griffey's strengths and ranking in the league.  Plus the fact that he is so much more effective against righties makes one wonder why they highlight his numbers against lefties in the grid on the other card.  Why wouldn't you highlight the more impressive stats?  You trying to make our guy look bad, Topps?  I feel like I just caught them in a conspiracy.  He is Upper Deck's "number one" guy after all.... 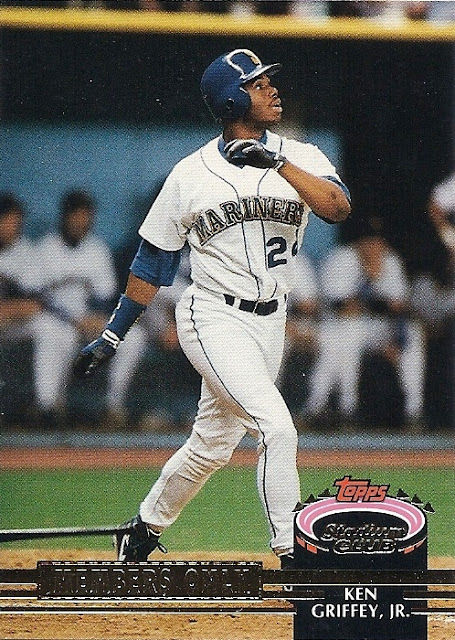 The Members Only set was sent to Stadium Club members only (oh - I just got that).  It was made up of star players of the day in multiple sports and features the familiar gold horizontal lines that we saw in '91.  The picture looks like it was taken a few seconds after the picture in the base card as the M's are in the visitor's dugout and it's the same field, but his turtleneck gives it away - this is not the same at-bat.

I like the back, particularly the random crowd along the bottom that somebody in Topps' visual effects department obviously "Scooby-Doo'd" together.  Mr. Pink Shirt is in there four times, but somehow there's only one guy-in-lime-green-turban.  Explain that.

The back also highlights the incredibly rare and amazing tale of a father and son's inspirational achievements in this most hallowed of games, blah, blah, blah.  You can read. 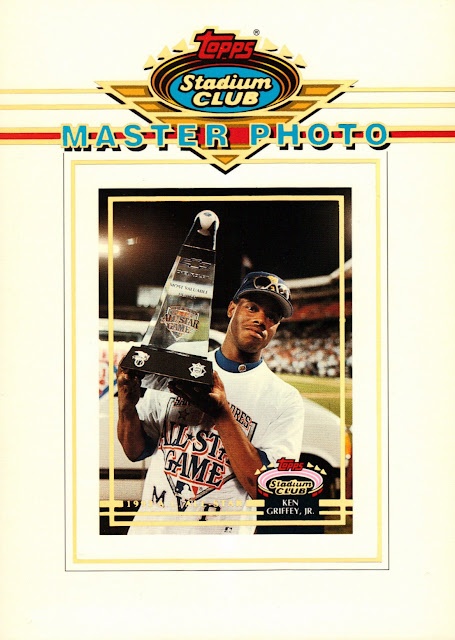 Master Photos #7 depicts Griffey posing in front of the hallowed "Chevy All-Star Van."  This is a picture of said card I found on the Interweb.  "Why?" you ask since I claimed to own this card in the beginning of this post which is something you totally remember.

The answer is I do own this card.  It's trapped in here: 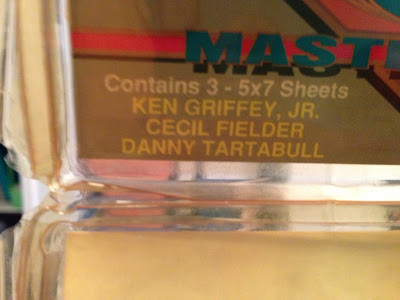 This package contains three cards.  Tartabull (from Seinfeld) on the front, and maybe Griffey on the back? 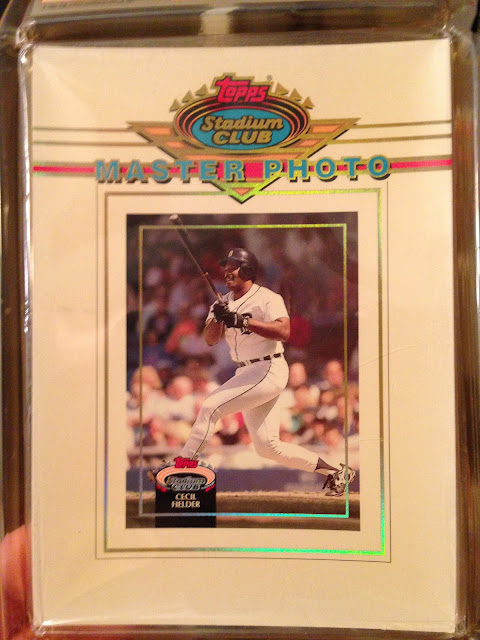 Dammit.  So the one that matters is stuck between the Seinfeld guy and Prince Fielder's dad.  Great.  Just great.  I was seconds away from cracking open the sealed package.  Luckily I was able to keep my (hoarder) composure when I found that clean image of the Griffey card online, and relief washed over me in an awesome wave....

I am missing one Griffey from this set, and it's a rare one of the Members Choice card with a logo stamp from the East Coast National Convention of Sports Memorabilia where they were given away:


I'm a big fan of simple, but we've all seen simple done more attractively.  Generally the photo quality makes up for what personality this set is lacking; but come on, Stadium Club, make it yours!  Throw a big red stripe in there or something - we can say it was your idea.....

Posted by The Junior Junkie at 4:13 PM