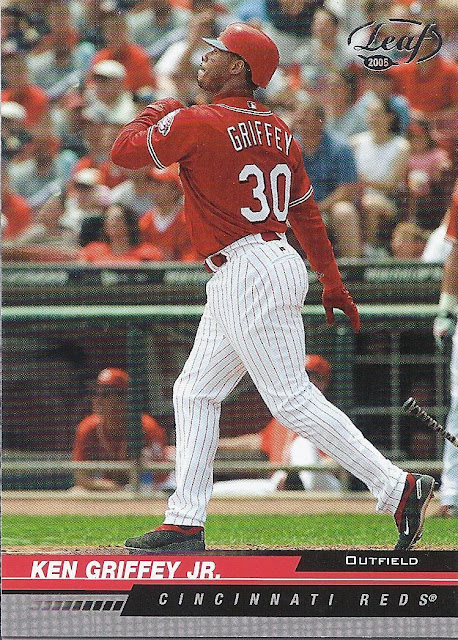 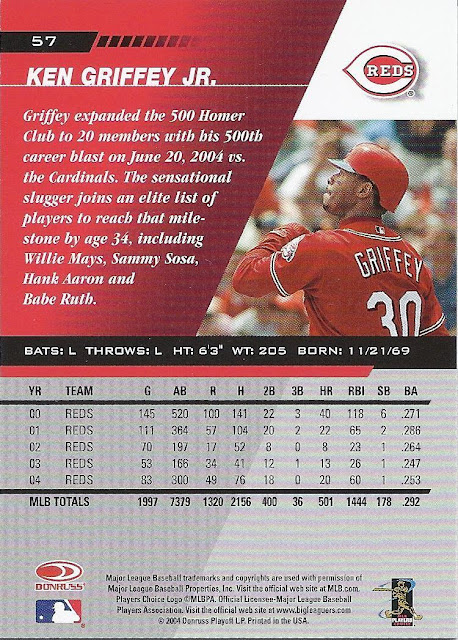 Is this a good Griffey card? Yes.  The last of the Leaf series, once among the most prestigious in the card market.

The set: There was a time when Leaf put out some of the most innovative and attractive designs in the industry.  Since their highly successful reintroduction in 1990 they had been cementing themselves as a respected high-end set.

Sadly, things were never the same for Leaf after parent company Donruss declared bankruptcy and were bought out by the Playoff company.  For two years no Leaf sets were even made.  When they did return, industry focus had shifted to super-premium sets like Leaf Limited and Certified Materials containing more relics and super-limited run cards and for which higher premiums could be charged.  The base set design would never recapture the spark it had in the 90's.

The design itself is comprised of a bunch of diagonal and horizontal lines in team-appropriate colors all jumbled together at the bottom.  The same design is repeated on the Passing Through Time subset with the addition of a set name along the top.  The photo on the front is repeated on the back with no additional zoom or visual effect.  We get five seasons of stats plus a career line and a pretty standard blurb.  The only foil is on the Leaf logo.

The photography in the set is much like that of Upper Deck at the end of their life span - reasonably good action photography but lacking in personality and uniqueness.  Not bad but not great, either.

Let's look at that Griffey: 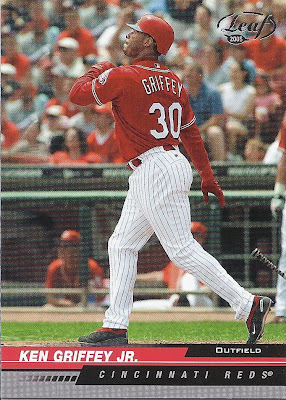 Let's face it - the home runs weren't coming quite as easy as they had just a few years earlier.  Plagued by injuries and a slipping batting average, Griffey limped past 500 HR in 2004.  When they did happen they must have felt good.  In this picture Griffey is giving the ol' pursed-lips-hiding-a-grin expression. 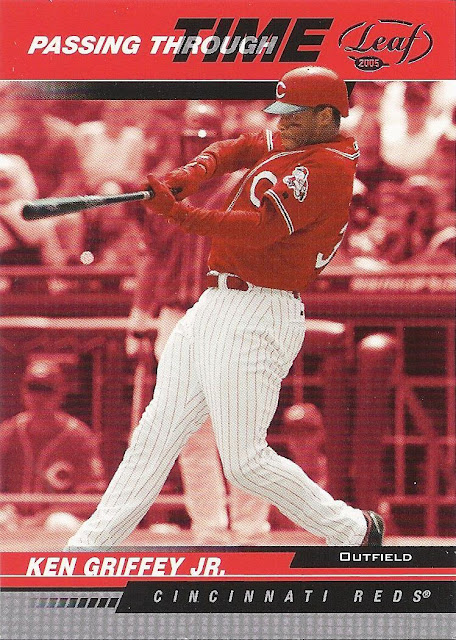 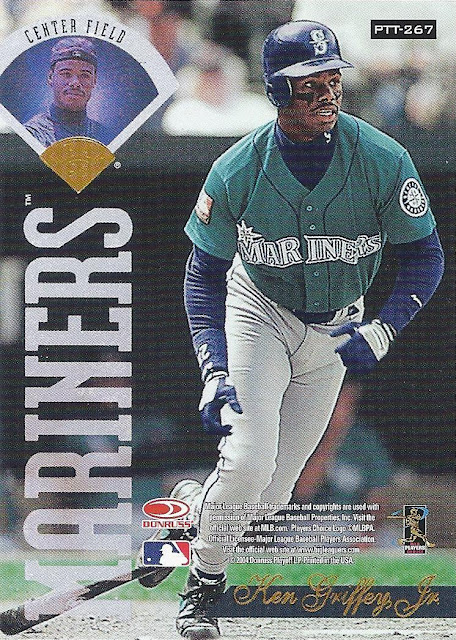 The picture here was obviously taken a split-second before that on the base card but at a slightly different angle and tinted red.  I'm not certain whether the technique of using multiple pictures from the same at-bat is lazy or kind of neat, but it's better than in 2004 when they just straight-up used the exact same picture.  A few more like this and we could make a flip-book.

Like 2002 Donruss Originals, this subset harkens back to a Leaf design from a decade previous.  Unlike Originals, it doesn't update the card in any way.  Still, it's a neat way to say "Hey, remember this?  We made that."  The subset also appears in the 2004 Leaf set where it depicts the 1994 Leaf Griffey card.


This is a great shot of the Kid about starting his run to first.  They took a few cost-saving liberties by removing the gold foil and holographic printing along the left side; but it's one of my favorite sets of all-time, so I'm happy to see it resurrected.  The "TM" behind "Mariners" on the 2005 card is an interesting change - the legalese must not have been in order without it.

I have never been able to find a complete insert checklist for 2005 Leaf, but here is a list I have gleaned from various sources around the Interweb of Griffeys that exist but that are not in my collection:

I'm certain there are more inserts and parallels (the list from 2004 is as long as Amanda Bynes' rap sheet).  If you have any information on this or a complete checklist, hit me up.
Posted by The Junior Junkie at 2:32 PM