Brad's Blog Brings Blue, a Brave, and a Bevy of Beaucoup Baddassery to Boot

Brad from Brad's Blog recently posted a bunch of nice cards he has available for trade.  I looked over his list in search of possible Griffeys, and in doing so I spotted two cards I really liked.  Brad promised to send them on along with some spare Griffeys for good measure.

Here are the two cards I claimed from his list: 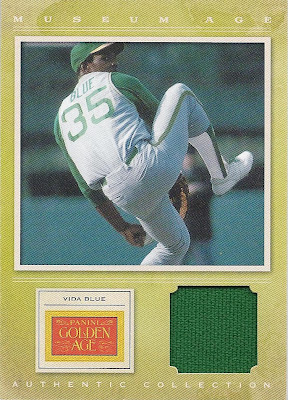 The great Vida Blue, Louisiana native and three-time World Series champ.  One of the most dominant pitchers of his day, Mr. Blue has the rare feat of having started in the All-Star Game for both the National and American Leagues.

Logoless it may be, but that is one baddass picture. 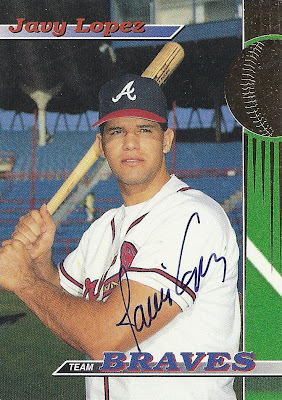 Speaking of great pitchers, Javy here caught one of the greatest staffs ever assembled.  The mid-90's Braves included guys like Greg Maddux, John Smoltz, Tom Glavine, and Steve Avery.  Mark Wohlers and Greg McMichael also come to mind.  Javy here caught for all of them, giving him a lot of screen time on TBS in the 90's.

His hitting was also amazingly solid for a catcher, a lifetime .287 with 260 HR and 864 RBI.  He is the single-season record holder for HR by a catcher at 43, two more than previous record holder Todd Hundley.  Spending the vast majority of his career in Atlanta, Javy landed a World Series ring in 1995. 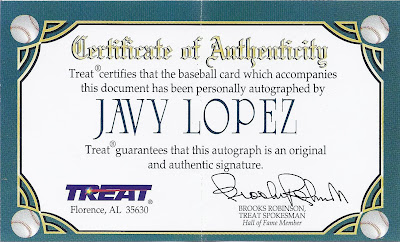 I have a pretty extensive Javy Lopez collection.  This card just barely edges out his '92 Bowman rookie as my new favorite card of his..... 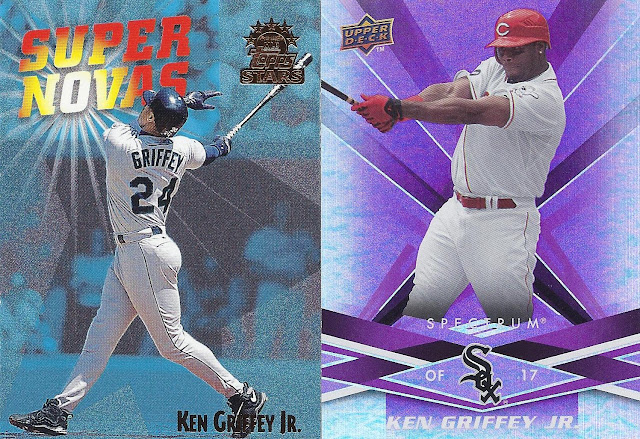 That Topps Stars Supernovas is completely new to me, and what a picture.  It looks like he just put a ball into orbit, and he's about to do that audacious dropping-of-the-bat thing he does when he knows he's crushed one.  Also, while I can't recall whether I already have that UD Spectrum card, it deserves another look.  Reds uni with a White Sox logo - crazy to see on a Griffey card.

I'll be sending Brad as many decent Phillies and whatever Frank Thomas cards I can.  Do thou the same!
Posted by The Junior Junkie at 11:17 AM