Here is every Griffey card made by Fleer Ultra.  This is one of those brands whose life cycle began and ended within the timeline of Griffey's career, so there was never a year in the brand's existence that didn't feature Junior on a base card.  That also makes this post a compendium of every Fleer Ultra design by year.

I find Fleer Ultra's design evolution more coherent than that of nearly every other brand of this scale.  Almost 30% of Fleer base sets feature the Kid fielding - ratio-wise probably more than any other brand.  Over half of the base set designs have roughly the same layout.  On the down side, the set is also known for having a billion inserts and parallels, a fact that completionist collectors like me resent but that also made pack ripping a lot of fun. 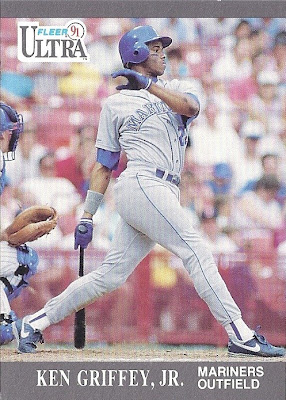 The inagural set is unremarkable in many ways and utterly unrecognizeable as an Ultra card.  I've always thought of it as the "silver-headed step child" of the brand's timeline.  Even the logo would change after this first set, but bigger changes were also coming..... 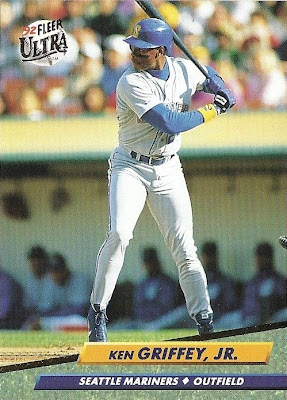 Now we're getting somewhere.  Gloss, foil, a permanent logo, and a cool, colorful, modern design.  We are getting there.  This design was so popular, Ultra used it again. 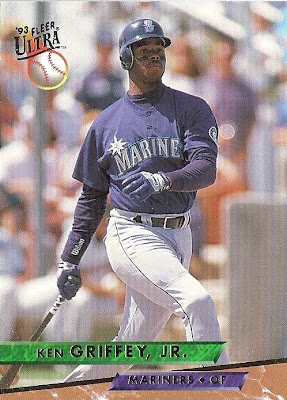 There it is: the same basic design with a few minor tweaks.  Gold letters, marbling in the fields, and a flaming baeball in the Ultra logo weren't enough to properly differentiate this set from it's predecessor.  Even as a kid with a mind like a steel trap who had every design and year memorized, I still had to go to the logo to see what set I was dealing with.  Still, a really cool design.  Can't blame them for sticking to it. 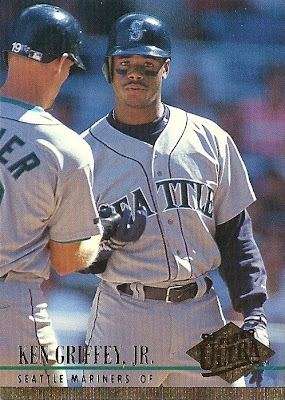 This is a favorite for the cool gold foil logo with the tasteful font and horizontal lines.  On horizontally-oriented cards the name and logo are kept on the short edge for a really awkward look.  Luckily we don't have to worry about that fact on the Griffey.  Instead we have a great candid shot of the Kid caught looking right at the camera, gettin' kudos from his homie, Jay Buhner.  Great card. 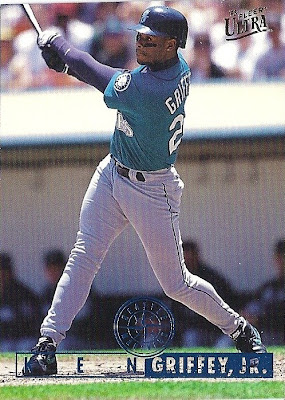 The first of Ultra's "full-bleed-with-shiny-floating-name-plate" aesthetic.  More than half their sets have this same basic layout, and it works.  The name plate here is low-impact and see-through.  This is also the year they would introduce the Gold Medallion parallel, an imprinted gold seal on the logo.  Kind of a lame way of doing it, but they were noobs to the whole parallel thing and would get better by and by. 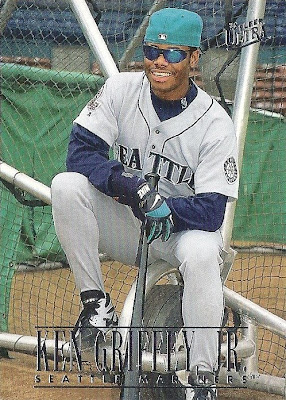 Again with the low-impact name plate, this time embracing simplicity.  This is another favorite among Ultra cards because of the neat colors in the picture and party time Griffey keepin' things light n' breezy at batting practice.  Just chillaxin', you know.  Stayin' frosty. 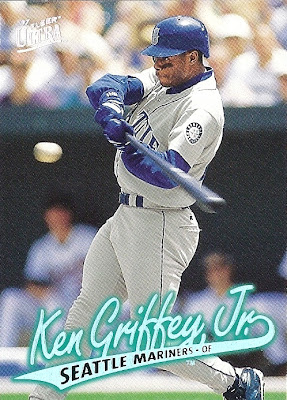 I bought a lot of this when it came out.  The name plate has a cool refracty effect and is written in a big, playful script font.  This is the first of several "script-on-a-slight-angle" (SOASA) designs we would see. 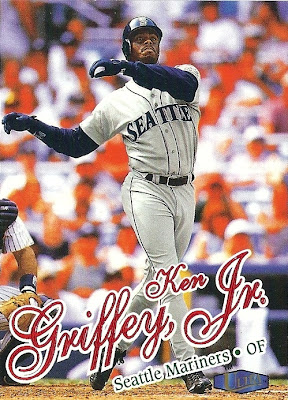 SOASA, this time in slightly raised metallic printing.  The photography in this set is great - with that great background this particular photo pops right off the card.  Then again I find the diagonal-ness of the name plate here feels cheap and off-putting.  Is it just me? 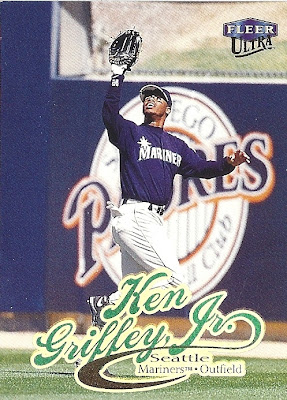 SOASA, and our first shot of Junior fielding on an Ultra card.  Backgroud is suspect, but the font is really cool and a little signature-like.  Another good-looking card. 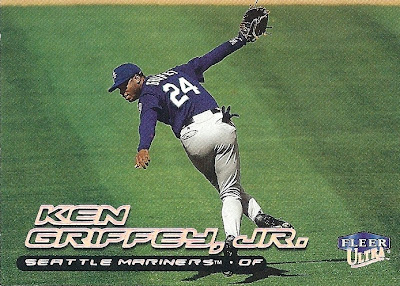 This super-baddass specimen shows us the potential of a full-bleed, horizontally-oriented fielding card.  The futuristic font in holofoil is perfect against the manicured outfield grass.  And what is Junior doing here?  Just kinda flying around?  I imagine him making airplane noises with his mouth, and I like it.  I bought a lot of Ultra in my collecting heyday, but that was years before this particular set came out.  Despite that, this is probably my favorite Ultra card. 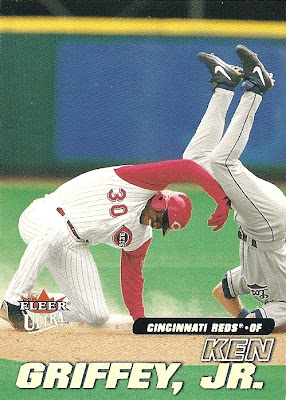 A base-running collision on a Griffey card - that never happens.  This design is very similar to the previous year's but with less-awesome fonts.  And he's really close to that Dodger's balls.  I'm thinking that's Alex Cora based on the fact that he must have been coming from the shortstop position as opposed to 2nd base to wind up in that position.  If I'm wrong, it's Mark Grudzielanek. 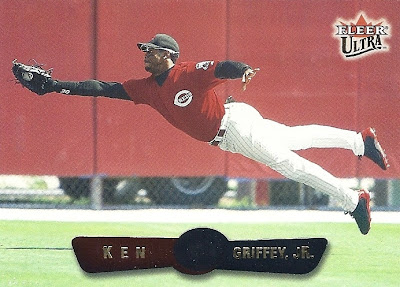 Another super awesome horizontal, full-bleed fielding shot.  It's similar to Junior's '94 Upper Deck photo in that he's pulling a Superman.  The ball peeking out from inside the glove is also a nice touch.  Is it just me or does this feel like a Stadium Club design? 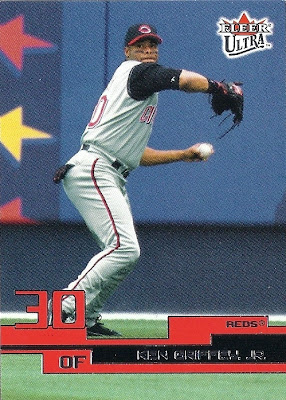 All the big brands are guilty of using a mess of random boxes and angular lines to look modern.  Ultra only did it this one time.  I like showcasing the guy's number, but the rest just looks silly.  Plus the picture is a little blurry and feels forced onto the card in general.  Not a fan of this one. 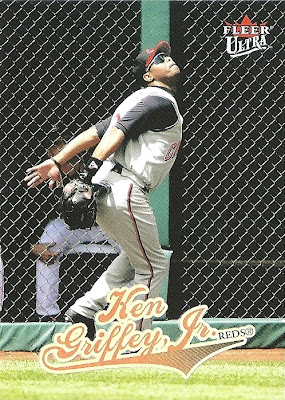 Back to the tried and true SOASA.  This one is very similar to the 1999 design.  It's also the last fielding shot we would get. 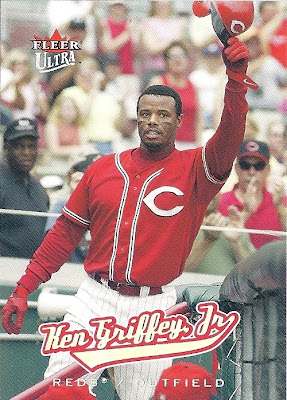 SOASA, a little more angular font, but roughly the same.  An excellent crowd shot here, especially with the epic grimace of the man in black on the left there.  He is not happy Griffey just did that, whatever it was.  This would have made a great sunset card if he hadn't ended up playing with two more teams after the Reds. 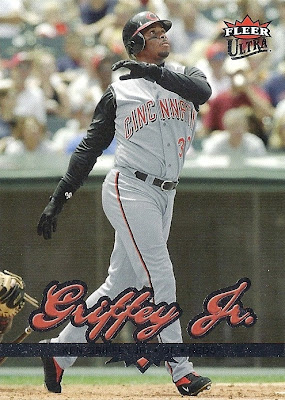 Script, not angled but italicized.  These last two are a bit of an embarassment.  On this one we have a great photo of the Kid having just launched one, his last name in script, and his full name and team in silver below. 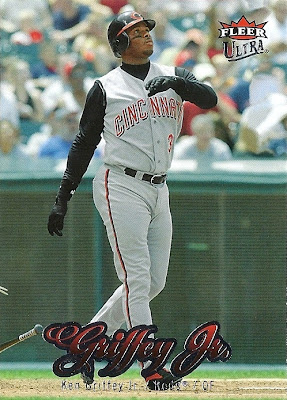 On this one we have a great photo of the Kid having just launched one, his last name in script, and his full name and team in silver below.  To be fair, I think this picture was taken 1/100th of a second later than the '06 one.  Ol' Redshirt is in the background drinking out of his big white cup, Beardy McBlueshirt is there with his Brownish/grayish Blob of a wife, and Middle-aged Whiteshirt is hanging out near Junior's left elbow on both cards.

Maybe they ran out of money and were like, "Guys, we have all this paper and all this mylar - let's put out one last batch of cards then go get hammered," and they found the one script font they hadn't used yet and slapped it on there.  Anyway, here's Ultra's swan song: the same thing they did the year before.  Sad ending.


To this day I really like Ultra cards.  They were always cool, shiny, and forward-thinking even when they were thinking about the year before.

Here are all 17 years of Fleer Ultra base cards: 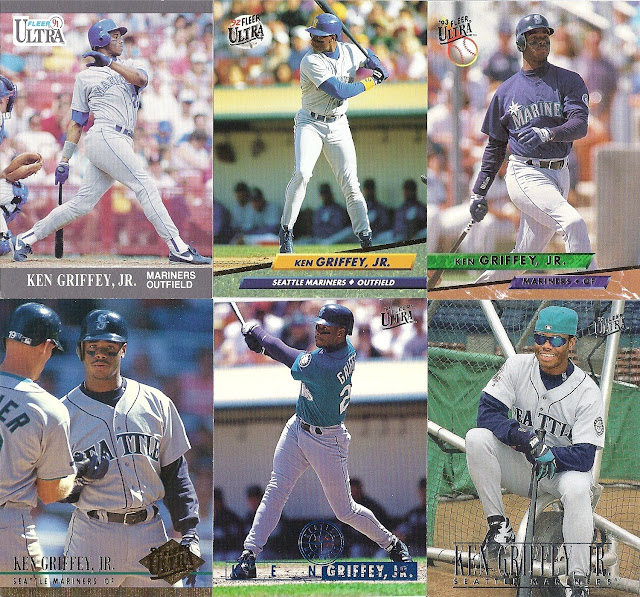 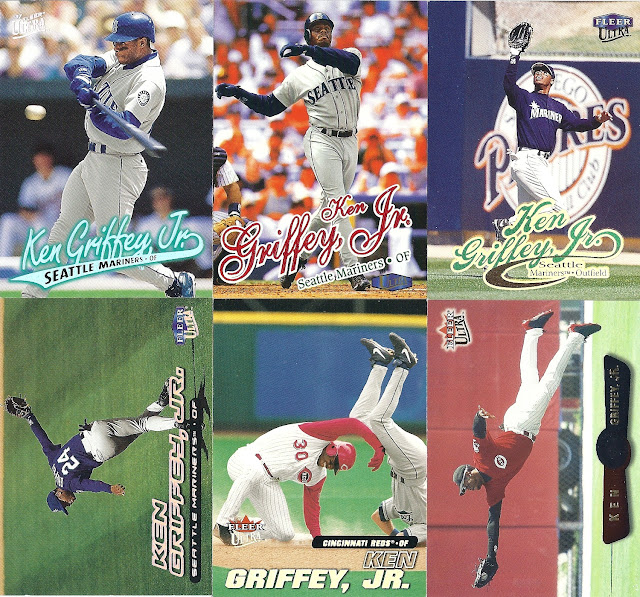 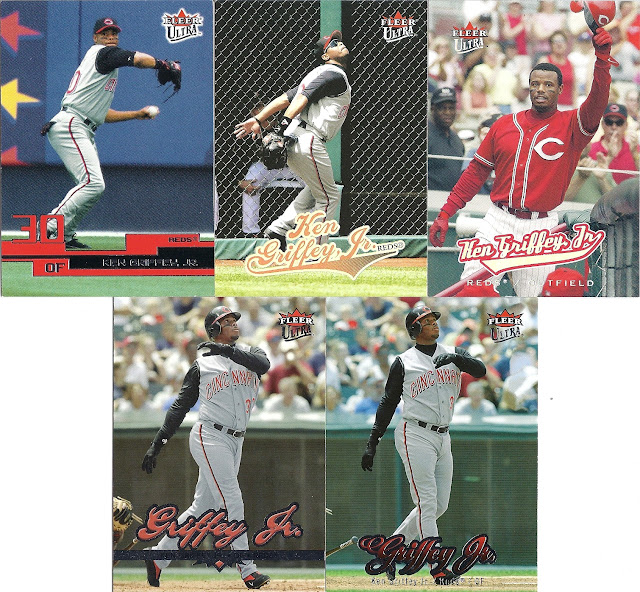 Posted by The Junior Junkie at 5:10 PM