Hey, Look What I Bought: a Trip to the LCS

When I was a kid and I went to the card shop, I was pretty excited to have ten bucks to spend.  I would pick up a couple of packs and maybe a Griffey base card for three bucks, and that would be it.  Now in the days of adult pay checks and credit cards and such, I am able to score hauls that 13-year-old me would have done that awkward adolescent overreaction for. 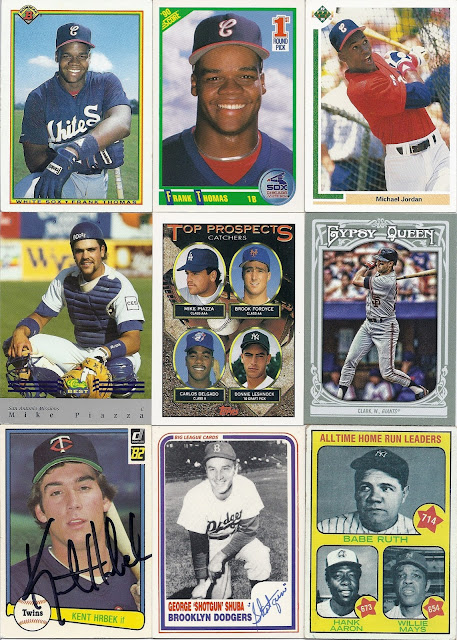 Here we have two great Frank Thomas rookies, two Piazza rookies, and a Michael Jordan pre-rookie.  New Orleans may be the only place that Will Clark could sell for a dollar.  Also a signed Kent Hrbek rookie, a nickname-signed "Shotgun" Shuba, and a vintage Ruth/Aaron/Mays card from before Hank's breaking fo the HR record.  That last one blew my mind.  I don't actually know the value, but it's got to be more than a dollar, right?

That's it for the dollar cards.  The following are from a ten dollar 800-count mystery long box.  These have produced some great stuff int he past, and overall this one was no different: 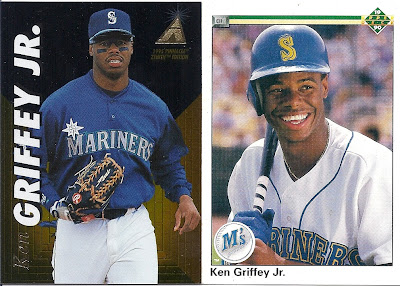 You bet your sweet bippy there were Griffeys.


He also had a box of dollar packs that uncluded a bunch of Bowman from the 2000's.  I picked up two packs of Bowman and two of Topps Stars which I had never opened before.
﻿
﻿﻿
﻿

That was it from my LCS.  I did also find myself on the Westbank this past weekend and ended up stopping at a card shop we spotted in a strip mall.  There wasn't much to be had, but I found these that I needed:

﻿
﻿
Card shops down here are not at all baseball-oriented, so hauls like this tend to be few and far-between.  I feel like I hit the lottery right now.