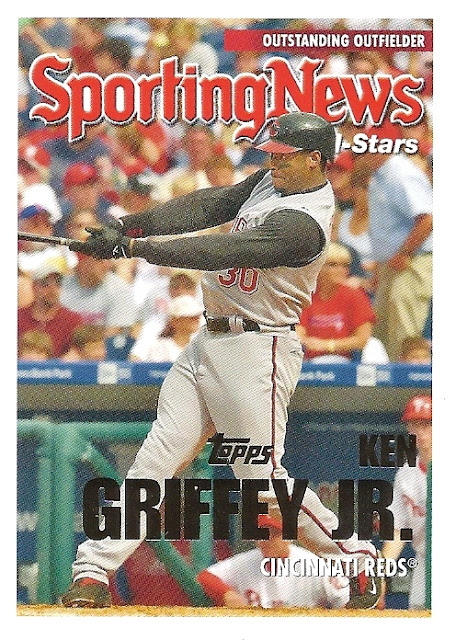 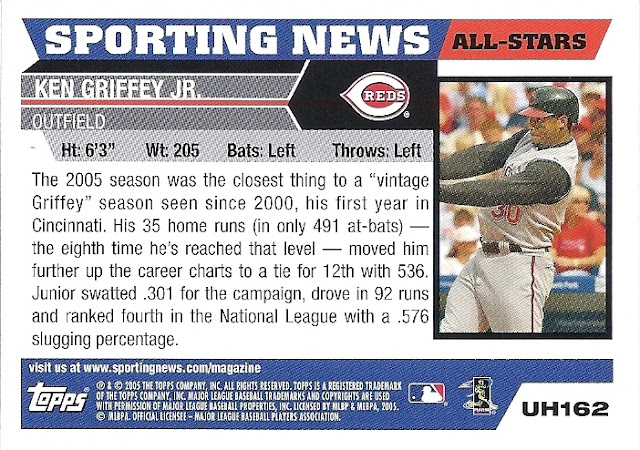 Griffey looks: going for a base hit

Is this a good Griffey card? Yes.  A rare "magazine" card that heralds the return of the classic Junior in Cincy.

The set:  Update and Highlights is where Topps flexed their chase card muscle in 2005.  First you've got the Gold parallels numbered out of 2005 and the Blue parallels numbered out of 1 (damn).  In addition to these two parallels there are no fewer than 20 different relic and patch inserts to be had that run the gamut of scarcity from 1:29 up to 1:317,088.  Oh, and did I mention none of them feature the Gentleman who is the subject of this blog?

﻿﻿﻿
﻿
﻿
The guy was a living legend when this set was made, and they couldn't put him on a single insert card?  I understand there was some sort of exclusivity agreement between Griffey and Upper Deck in the area of autographs, but the details of that are hard to come by.  Hence, I remain resentful.

They also managed to give Barry Bonds 330 base cards.  That's the same amount as every other player combined.  SMDH.....


Let's look at one of the two Griffeys that made it into the set: 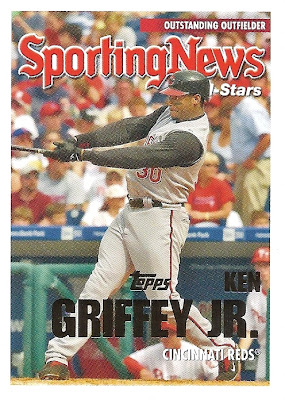 I've always been drawn to newspaper cards, but this one is more of a magazine card.  Looks legit, too.  It's got a sweet blurry crowd shot in the background with lots of people not paying attention, and if I'm not mistaken Junior is going for a base hit here.  That doesn't look like his home run swing.  The overall look is alright, but I'm not crazy about it.

The number of this card is UH162.  That wasn't me clearing my throat or trying to remember the number and filling my thinking space with "uhhhhh" though that is what I hear in my brain when I read the card numbers in this set: "Uhhhh One.  Uhhhh Two.  Uhhhh Three."  It's like geez, learn to count, bro.

Here are all the cards from 2005 Topps Update and Highlights I don't have:

That's right, I only have one Griffey from this set.  I consider #UH166 a missing base card which is embarassing.  I consider those 1/1's pretty much ungettable as are the printing plates, but the golds shouldn't be too tough.

In closing the Griffey is an OK-looking card, but as a whole I don't care for this set at all.  It's not bad in theory, just in application.  Pass.....
Posted by The Junior Junkie at 4:57 PM