Leaf was around before Griffey in the same way that O-Pee-Chee was around.  By that I mean for a kid in the American south, it wasn't.  Before that I understood them to be a regional brand.  I don't really count them as a set until they introduced their first mass-market product in 1990.  Touted as Donruss' premium set, people went nuts for it when it hit the market.  The photography wasn't out of this world, but it was solid enough.  They had a few hits design-wise in the 90's, but like many once-popular brands it stopped turning a profit and was shut down....twice.

When I collected in the mid-90's, Leaf were some of my favorite packs to rip.  They felt rich, like a poor man's Flair.  Sure, they were three bucks a pack which was a lot, but the inserts and subsets were great and the base cards were fancy.  At least they were in the 20th century - not so much in the 21st.  They still have a few of my favorite designs of the 90's and one in particular that's arguably my all-time favorite.

Here is every Leaf design in order from their first major set in 1990 to their final set of 2005: 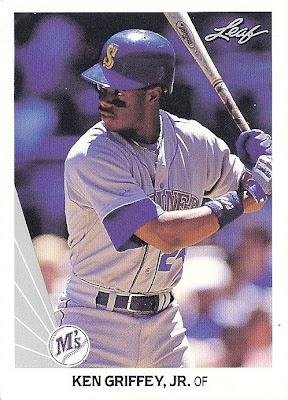 This was a hugely popular set and remains so to this day.  It was completely different from every other set of it's time except Upper Deck who it was made to compete with.  The design is simple and clean and the backs feature full-color portraits and nice, big stat boxes.  I think people were ready for a design like this with muted colors that don't distract you from the picture.  Plus you've got to love that cursive "L," right bro?  Definitely the most fun upper-case letter to write in cursive! <high five> 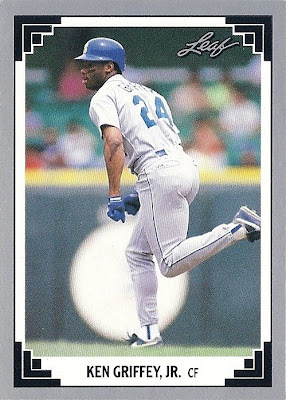 The second of the three "silver sets," this one includes an intricate border with black corner finials like a photograph in a scrapbook.  The name is below in a white field with the position.  They left the team logos out of this design to avoid the card looking too cluttered.  Very fancy. 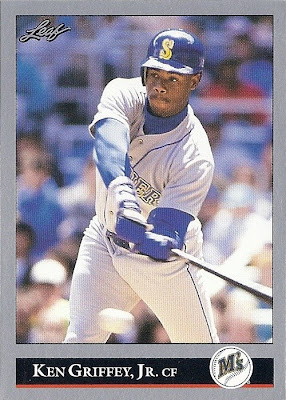 The white name in the black field looks great, and look!  A color design element for the first time in Leaf's mass-market history.  They underlined the name plate in red and include a team logo.  While this is the most cut-and-dry of the three silver sets, it's also my favorite.  Bold and striking, this is also the last Leaf set that would feature horizontally-oriented cards.

Over the next four years, team-coloring in and around the name plate replaces the rampant silver of the previous three sets.  Check it out: 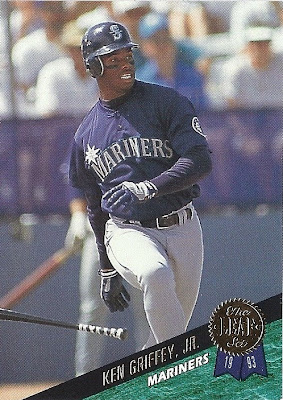 Finally a full-bleed layout.  This set is characterized by that slanted name plate above the field of marbelized team color.  The gold lettering and brand-new logo proclaiming this card is from "The Leaf Set" (oohs and aahs) give this card a high-end look.  I'm a big fan of the blue ribbon beneath the seal showing the date, an element that is both useful and attractive.  Plus I feel like I won something. 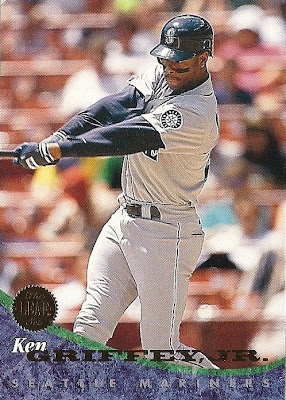 The marble theme continued in this "wave" design with the new Leaf logo on one side.  The player name is in a prominent elongated font with the team written below nice and big.  The wave colors vary by the player's team, and they all match without coming across as gaudy.  Attractive design with a great use of color here has made this set a collector favorite. 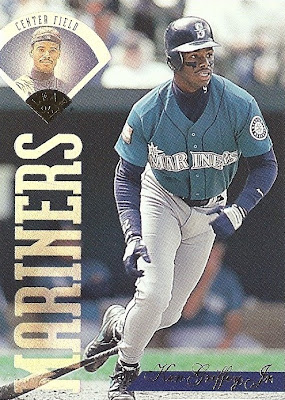 There's a lot going on in this card, but I find everything comes together organically and attractively.  Every card in the set is vertically-oriented and most of the pictures are of players running, pitching, batting, and fielding - you know, stand-up stuff.  The photos keep the player towards the right side of every card to accomodate the team name and portait elements printed in translucent holofoil on the left.  Below is a team-colored bar with the player name in extremely fancy gold-foil script.  The new logo featuring the set year is also stamped in gold below the holofoil portrait.  If you flip through this set, you'll find that they picked the perfect pictures of every player to keep the design from appearing cluttered.

Then again, I'm pretty biased.  I have an emotional bond with this set, and I'm currently only eight cards away from completing it.  That's a big deal for me as I'm not a set-builder. 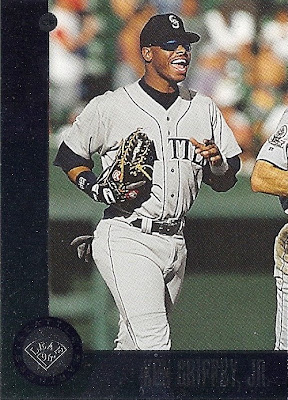 Translucent foil bars tinted a team color fill the left and bottom borders with the Leaf logo in the corner.  The player name appears below in a fancy stretched font, and his poition is shown in a small circle up top.  It was quite a step back from the heavy-handedness of the previous set, but it's not unattractive and the photography was particularly good this year. 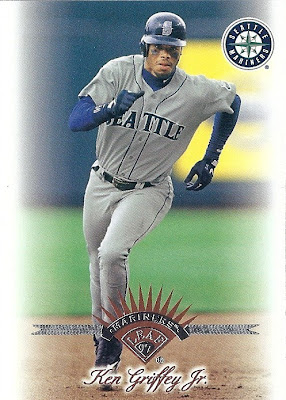 First I must admit that this is another great font and a really cool, modern design, all centered and looking great.  Frankly, everything in the middle of the card is right up my alley.

That fade on either side, man.  I think the reason behind it is to create focus on the action in the middle, and in the first series of this set those fades were a nice silvery-gray color (like me saw in those first three Leaf sets).  It looked pretty good.  So what happened?  I'm not sure if someone made a conscious decision to do this or if they flipped a switch and screwed up the whole printing process of Series 2, turning the gray fade to a white one, but yikes.  What before was a subtle, attractive effect now looks like a washed-out eyesore.  I'm willing to bet that someone really liked the glow effect the white creates behind the name that wasn't there before, but that person needs to be hit in the head with a hammer.  Their worst design of the '90's - this card gives me a headache. 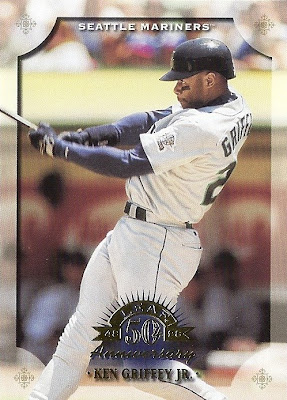 This card is easy to pass right over, but it's a really cool design if you really look.  First it's got this great organic border similar to that found on the 2001 Donruss 2000 "Throwback" insert design.  It's translucent so it frames the photo without obstructing it.  The small corner finials and 3D shading effect set it off nicely.  I also love the banner anniversary logo with the little spikes of modernity plus the inclusion of the team name up top, and what a great picture for this card.  A little more color may have boosted this set's appeal, but it really is a solid design.

This is the part when Donruss declares bankruptcy and is bought by Playoff, a football card company.  Four years later Leaf would return with a snazzy new logo and a terrible new design. 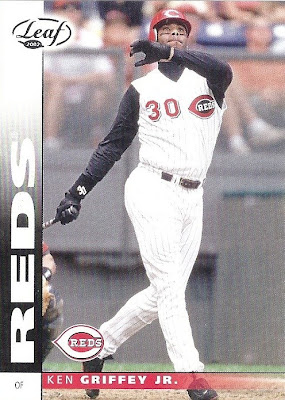 You tell me what aspects of the Leaf aesthetic are apparent in this design.  I mean it - show me one.  This card looks less like a Leaf card than an actual leaf.  Look at the big, stupid team name.  It's infuriating, but I do like the logo and the fact that it shows the set year. 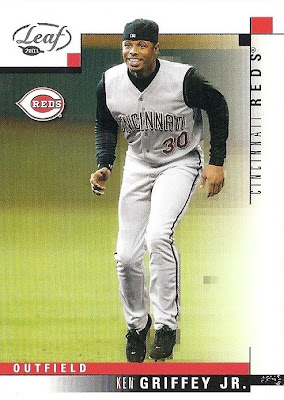 The least horrible of the 21st Century Leaf designs, this set still isn't very good.  It does have a few positive attributes such as the red and black squares and lines remind me of a Piet Mondrian painting.  I like the slight fade on the right side of the photo, and I also appreciate that the team name isn't chewing the edges of the card.  Not horrible, but also not very Leaf. 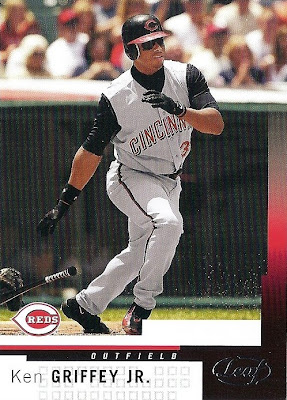 And what happened to including the set year in the logo?  These guys must have hated everything I like. 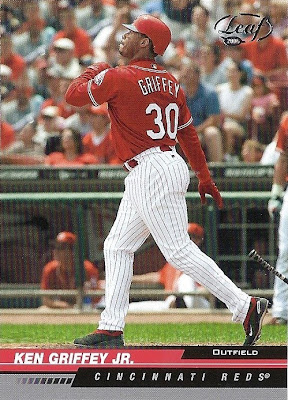 A classic lines-and-boxes-for-the-sake-of-lines-and-boxes design.  I've seen worse, but this might as well be an oddball promo card made for Pizza Hut.  By far the least Leafy of all the Leaf designs.

And that is where Leaf finally fell off the tree and got sucked up by the lawnmower.


I really loved Leaf in my collecting heyday as you can probably tell from my enthusiasm about the earlier sets.  It remains one of the few brands I was genuinely excited about cracking packs of year after year, but after seeing what was done with the brand I'm glad I was no longer collecting when these last few sets went down.

Should we be glad the brand was allowed to come back for a few years, or would it have been better to let it go back in '98?  Stephen King taught us in his novel Pet Sematary that it's best to let the dead be dead; otherwise they become evil undead monsters who slice into your Achilles' tendon with a scapel.  Then again, in the film National Lampoon's Chritmas Vacation Uncle Louis burns the Griswold family Christmas tree with his stogie and says "At least it's out of its misery."  Between these two I'm siding with Uncle Louis.  He had a sweet rug.

Here is the complete Leaf design timeline from 1990 to their final set in 2005: 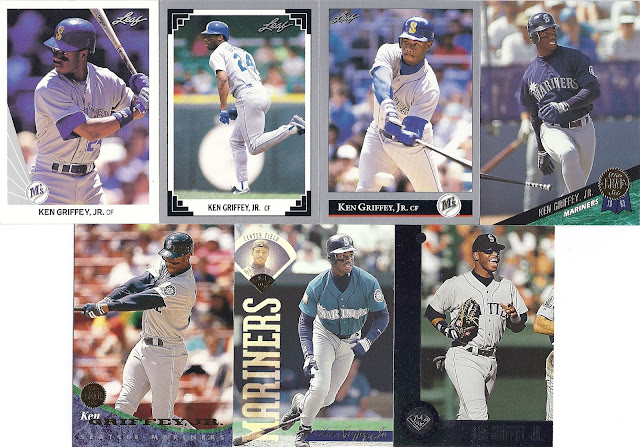 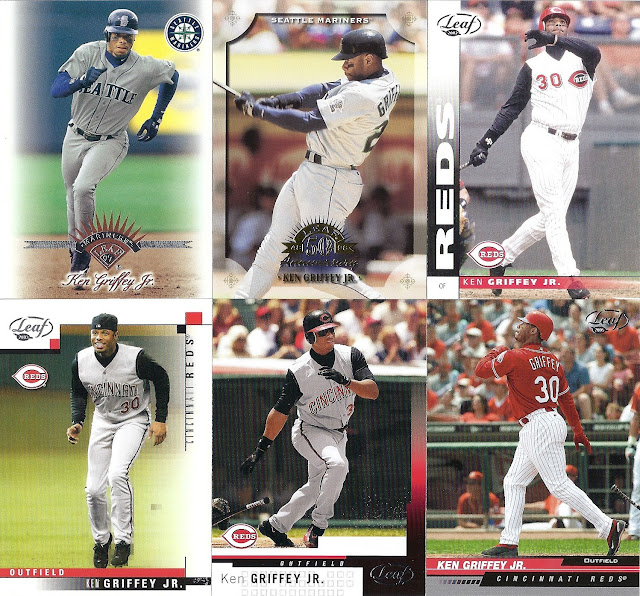 Posted by The Junior Junkie at 4:56 PM