﻿This post is part of an ongoing feature The Great Griffey Base Card Project.

Score started in ’88 as the first brand besides Topps, Fleer, and Donruss to offer cards on a major scale.  They hit the ground running with the best card backs in the industry: full-color with detailed blurbs and a portrait on white card stock.  Everyone else was still stuck on stat boxes and limited information on brown cardboard.  Then ’89 Upper Deck came along and everybody swooned.  Pretty soon every brand had comparable color/paper features and Score tried to stay afloat by branching out of the low-end market with Summit Edition which lasted all of two years.  It wasn’t long before they were elbowed out by the big boys and their entry-level sub-brands.

I always had a soft spot for Score for two reasons: first, I really dig the wonderfully feng-shuied back.  They fit a whole lot of information into a pleasing layout.  Second (and this is both a positive and negative attribute of Score) they aren’t afraid of color.  Right out of they were printing with every color of the spectrum, mixing and matching sometimes to their own detriment.  They were going nuts with it until ’93 when they backed off the colors and it somehow looked even worse.  ’94 and ’95 were only OK.  Oh, you’ll see….
Here is every Score design by year from 1989 to the end of the brand: 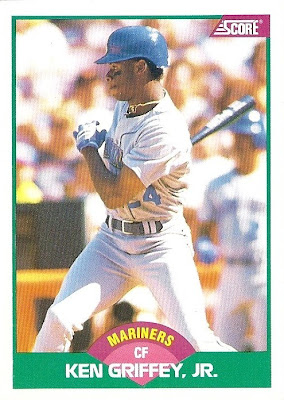 Behold!  The baseball field set.  This is the traded set, but I would be remiss to not include it.  There were a few different color layouts in this set, and the Griffey you see here had more pastel than any other.  Sadly this would not be their last foray into pastel territory. 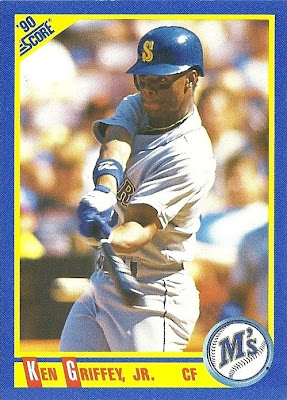 They did away with the white borders all together and went with a striking three-color layout: outer border, inner border, font.  The set featured the same crazy color combos as you came to expect from Score including orange-yellow-green, green-yellow-aqua, and red-yellow-purple.  A few of the Highlight and Rookie cards actually used white borders and didn’t look quite as wack-a-doodle.  At least the inclusion of the team logo was a nice touch. 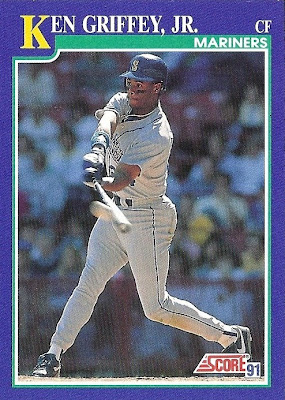 The moved the name to the top and made that first letter super huge.  This allowed the more creative of us to spell out fun words by taking Steve Sax, Ellis Burks, and Xavier Hernandez and fanning them like a poker hand to spell naughty words.  Finding that Xavier Hernandez card was tough - I can only assume because other kids were doing the same thing.  Sadly, no players in this set had names that begin with “U,” so a few choice words were out of the question.  Also the card design is ugly.  Did I mention that? 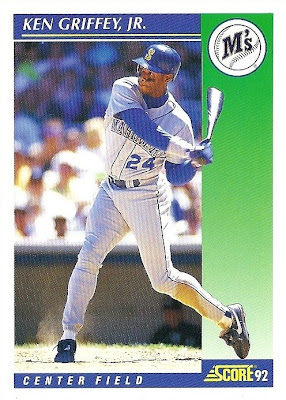 First I should probably mention that the set as a whole is actually pretty good.  That being said, again the color combos are really bizarre.  Griffey’s aren’t bad because they kind of match his team colors, but ask any player who ended up with peach and aqua design elements if those colors match his team (Joey Cora who was with the White Sox at the time got a card in exactly those colors.  The White Sox).  That side-mounted color bar is a serious commitment to the design, too.  It’s a third of the whole card, and all it holds is the team logo.  I’m not a graphic designer, so there may be some visual golden ratio they are shooting for; but as a baseball card collector this is still really weird. 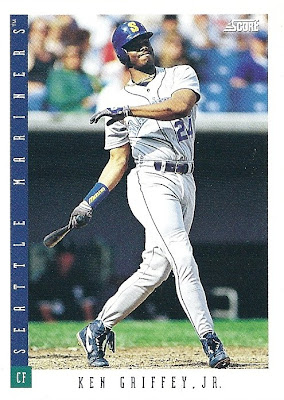 This is the first of several years when Score toyed with a drastic change in aesthetic.  This one is characterized by the modernized font and spacing of letters in team-colored bars.  Pretty forgettable, but you can see what they were going for.
Before we move on, is there anything more boring in this whole world than a paragraph describing the design of 1993 Score?  This must be what baseball card collectors do instead of counting sheep. 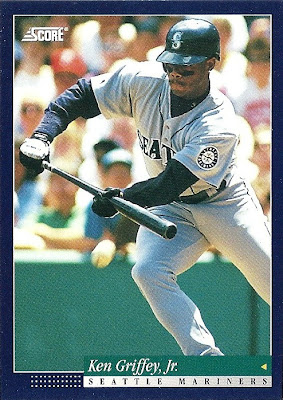 The cross-brand mass-modernization of card design that occurred in the early-to-mid 90’s was not lost on Score.  This year they introduced a glossy finish and continued to evolve their new muted, minimalist design strategy.  Here they give us a low-profile name plate with small fonts in italics.  While not unattractive, this set is terribly condition-sensitive due to its dark border.  The color of said border remains a mystery to this day (navy blue?  midnight blue?  I’m going with some variation of blue).  The shiny Gold Rush parallel of this base set is pretty cool. 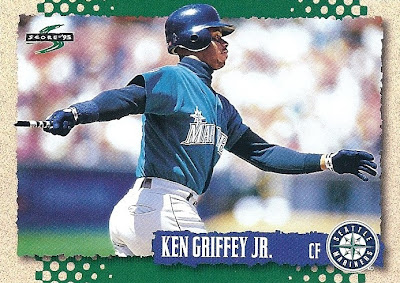 This design could only be made by Score.  The last time they would go bonkers with color or use a team logo, it features a bizarre green pattern over a sand-colored backdrop that also looks to be textured like sand.  The picture has shading on two sides so it appears to float above the backdrop.  Its edges as well as those of the name plate are deckled as though they had been ripped out of a magazine.
Now, when I look at designs like this I try to remember all the EXTREME nonsense that was floating around back then.  Remember that?  Every product was suddenly “eXtreme to the max, dude!” particularly those that dealt with kids.  The letter “X” started showing up in more places, oversized and red and bleeding like it had been scratched out by a bobcat.  It was embarrassingly overused.  I think Score was trying to capture a piece of that Xtreme <guitar riff> spirit with this design as well as their new logo.
If this set had a smell, it would be sports deodorant. 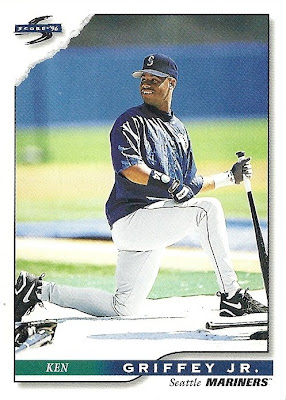 This is my favorite Score set.  They were finally all grown up and putting together clean, attractive card designs.  The great split-fountain name plate over the S-curve in the border and the name on the right feels balanced and stylish.  I even like the tear in the top right corner to reveal the logo.  This one is a big hit with me. 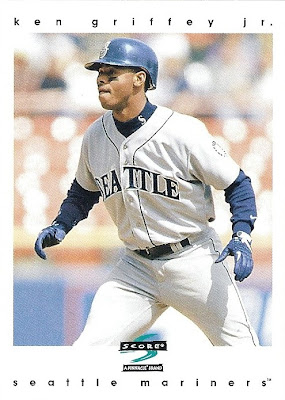 This one’s a little dry, but still a pretty good-looking set.  The font is simple and in all lowercase with the same prominent letter spacing as they had in ’93.  The logo is centered on the bottom of the picture and this time includes “A Pinnacle Brand” below it.  I think Score was trying to overcome the perception that their cards are “cheap” with this design.  It does come across as high-end though a little plain.  This set reminds me of fruit-at-the-bottom yogurt without the fruit. 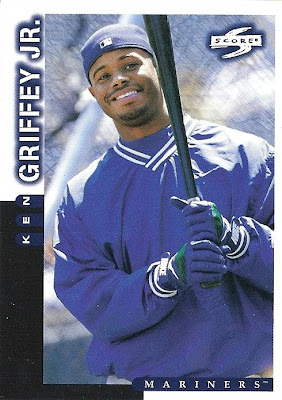 This is a whole set of checklists.  I know that sound weird, but I feel like every card in this set looks like a checklist.  While I like the side-orientation, the design is made up of a bunch of unrelated elements.  It feels messy and thrown together.  I do like the glow effect around the surname and the logo.
And with that, the Score story comes to an abrupt end.

Score was their own worst enemy with eleven years of relatively forgettable designs.  They had a few things going for them, but not enough to save them from the brand bloodbath of the late 90’s.  They’re still around making football cards - go pick up a pack and mail any New Orleans Saints you pull to me.
Here’s all the Score design from 1989 through 1998. 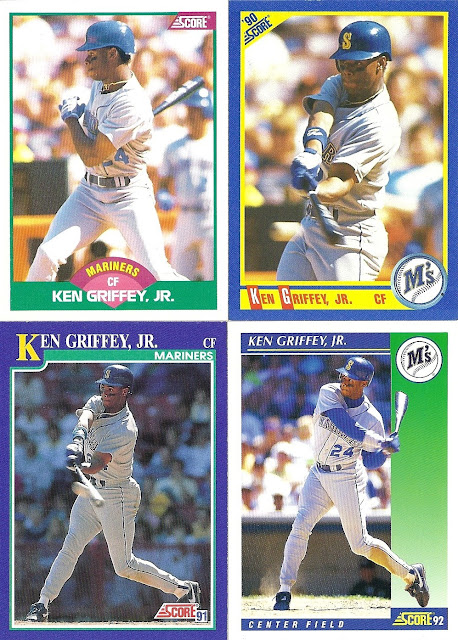 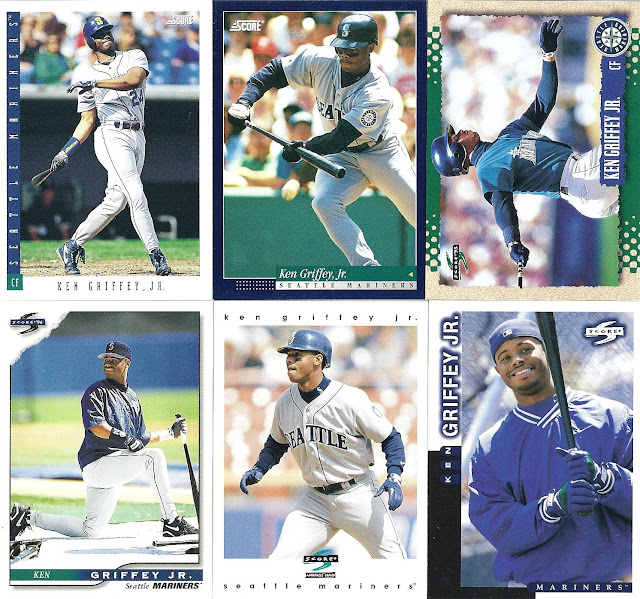