In the family of baseball card brands its always been obvious that Topps is the daddy, Bowman is the mommy, Upper Deck is the asshole older brother, Score is the tomboy sister, Fleer is the dog, Pacific is the wacky Mexican next-door neighbor who’s always getting into wacky adventures, Pinnacle is the smooth Tennis instructor who’s always trying to bed Topps’ wife, and Leaf is the gay uncle.  But who is Donruss?  While I’m a huge fan, Donruss’ identity has always been a mystery to me.

Whatever family character it ends up being, "manic/depressive" is an accurate term for Donruss.  This group is the Mr. Toad's Wild Ride of design timelines - you never knew what they were going to spit out the following year, but you knew it would be somewhere between greatness and, well, whatever you call the 1990 set.

Let's take a look at the twists, turns, highs and lows of the Donruss base card design timeline: 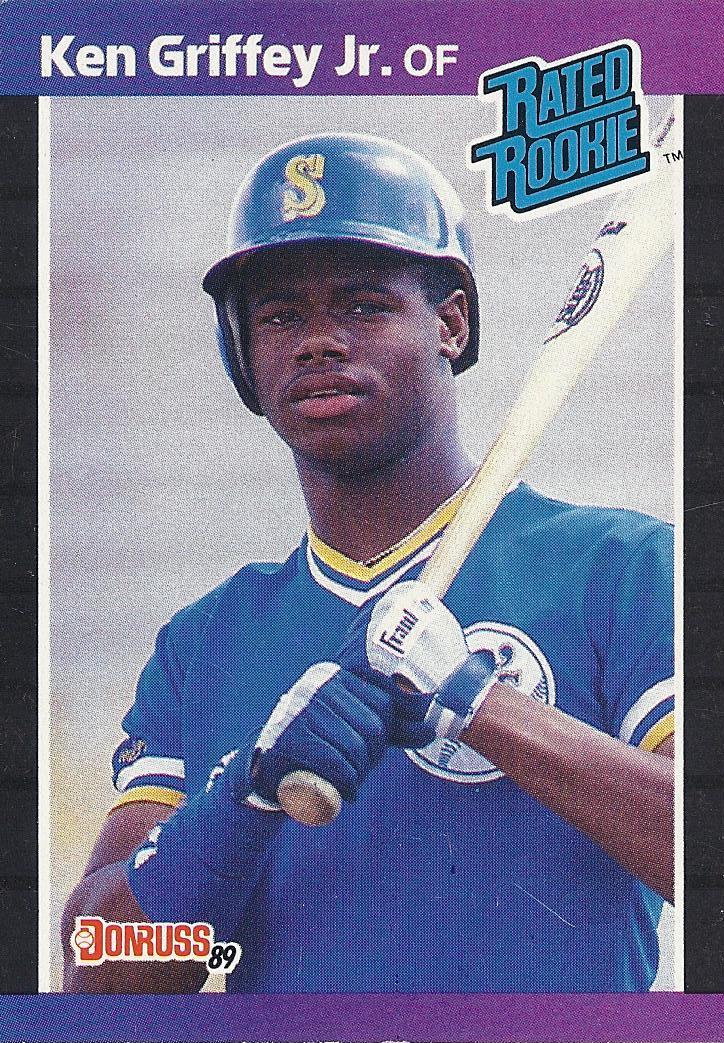 I love this set.  Check out the great split-fade colors on every card, the strobing rainbow effect when the cards are stacked together, the texturing in the black side borders.  Score did something similar in their ‘88 set where there were a handful of primary colors that made up huge segments of the base set.  Donruss expounded on that by adding a two-color fade to every card and by dispersing the color variations evenly throughout the set.  While I’ll admit I do have some emotional attachment here, I still say it’s one of the greatest Donruss sets and among the best designs of the 80’s.  Oh, and it has a Griffey rookie.  Did I mention that? 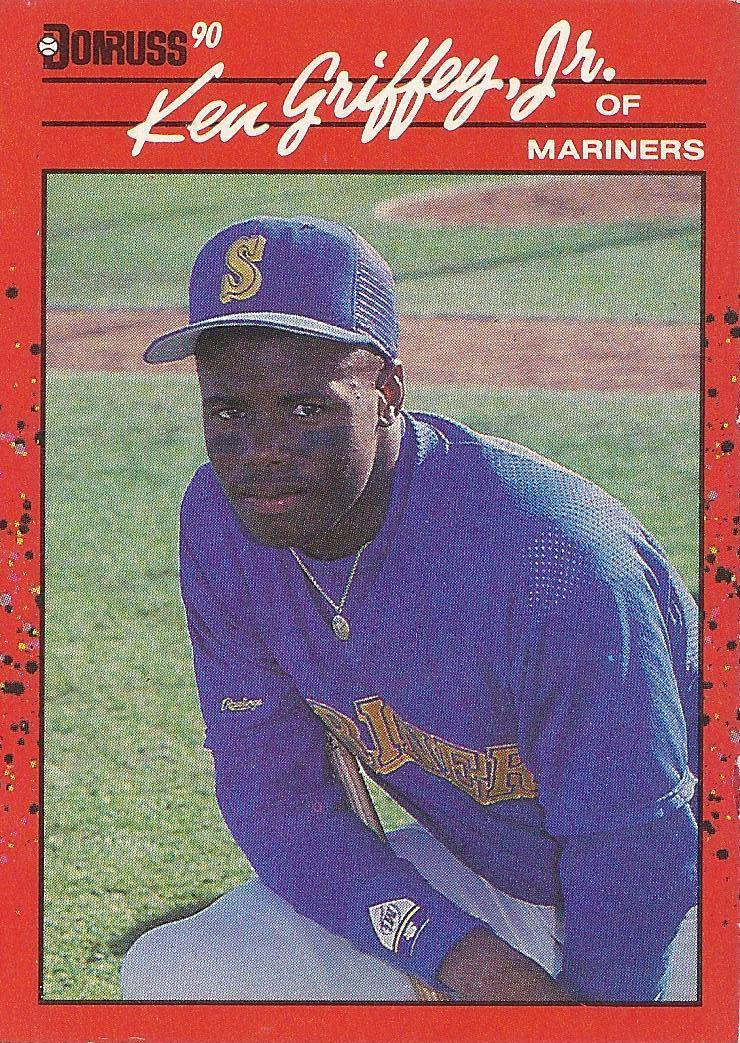 Red.  As.  Balls.  I'll try to be constructive in my criticism: I think this set would have been more popular in several colors like that aforementioned '88 Score set.  Can you imagine this design in yellow and green and purple?  It's a lot less horrifying than that unforgiving red.  Plus this does exist in blue and I think it looks kind of awesome.  This is embarrassing to admit, but I don't even mind the overall design here - it's that awful red that makes this a universally loathed set.  There, that wasn't so bad <punches kitten>. 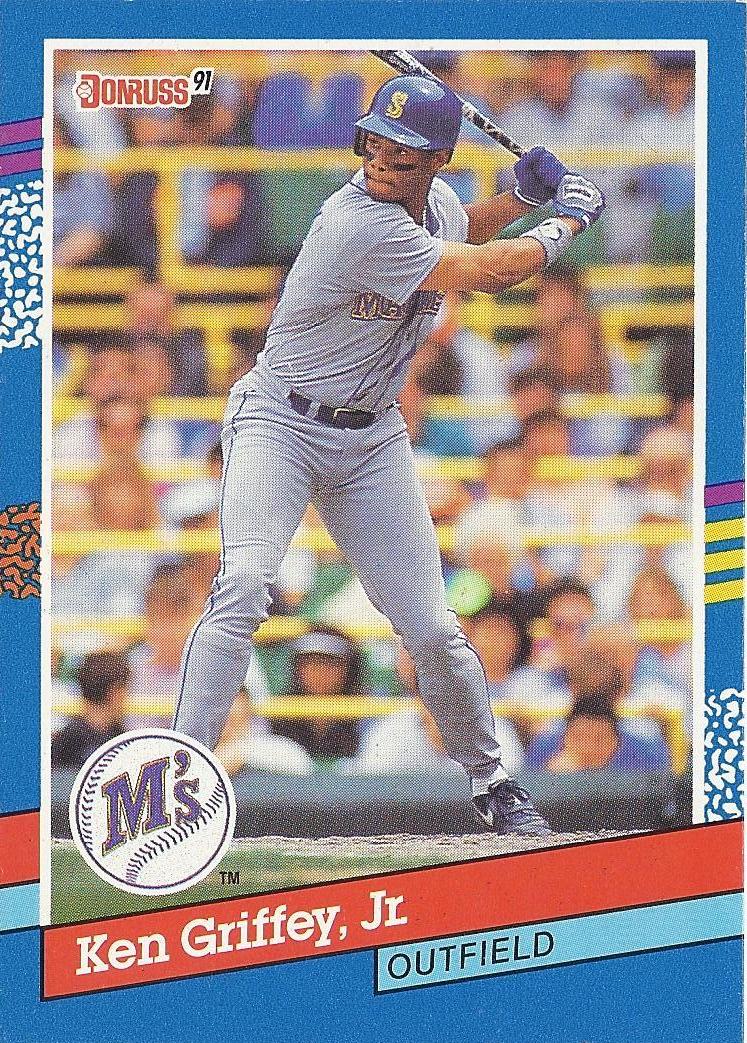 The diagonals of the ’86 set and the speckles of the ’90 set combined with the most basic of bright, primary colors to create a set that, while not as horrible as its predecessor, comes across as cheap (it was also overproduced as all get-out which didn’t help).  The green-bordered MVP cards look alright, I guess. 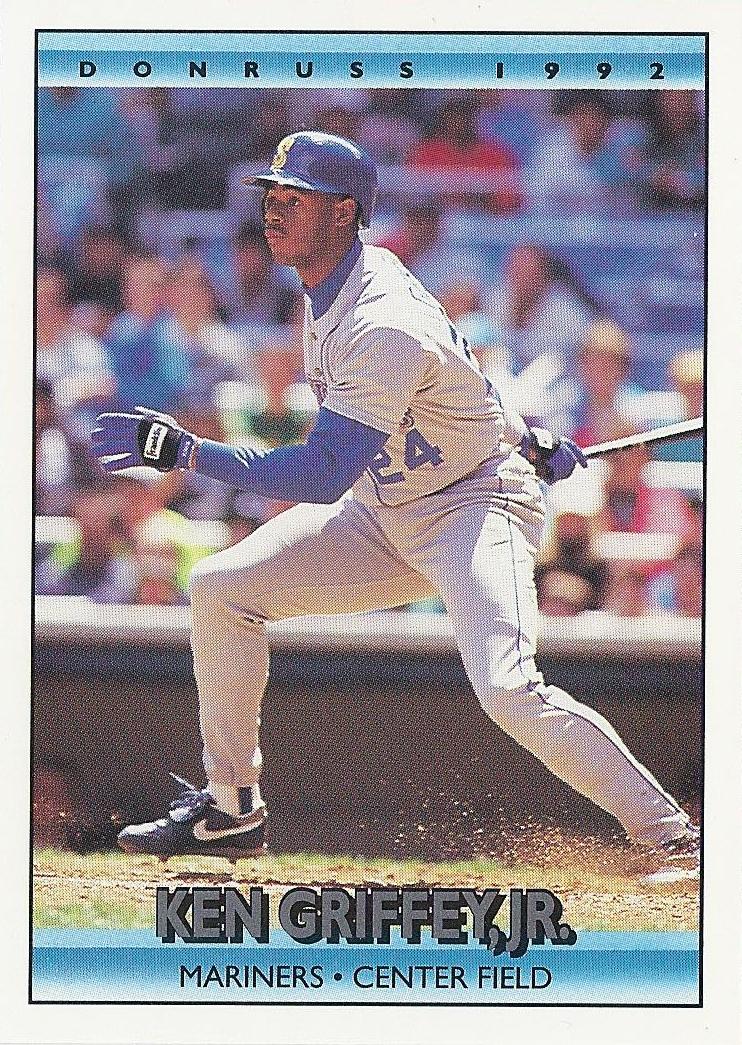 Classy - where did that come from?  This is the first of seven straight designs from Donruss that comes across as more adult.  Better card stock this year, plus silver-toned lettering for the name that looks pretty good with the light blue bars.  Not bad.  Again, some different colors would look good here, but not bad at all. 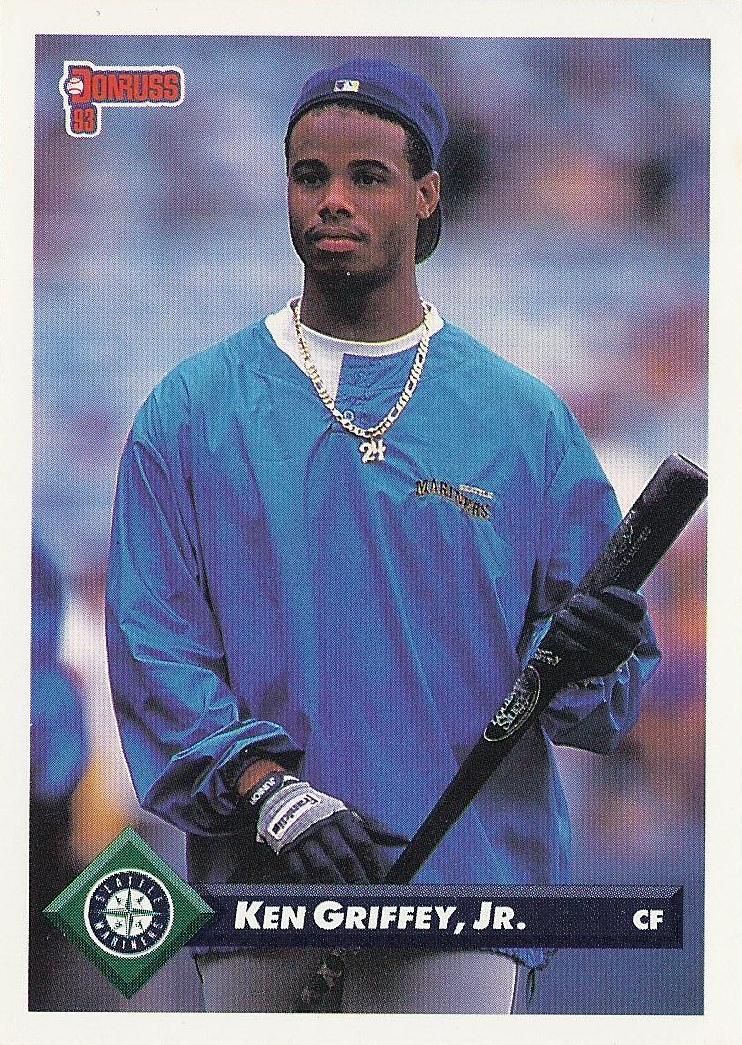 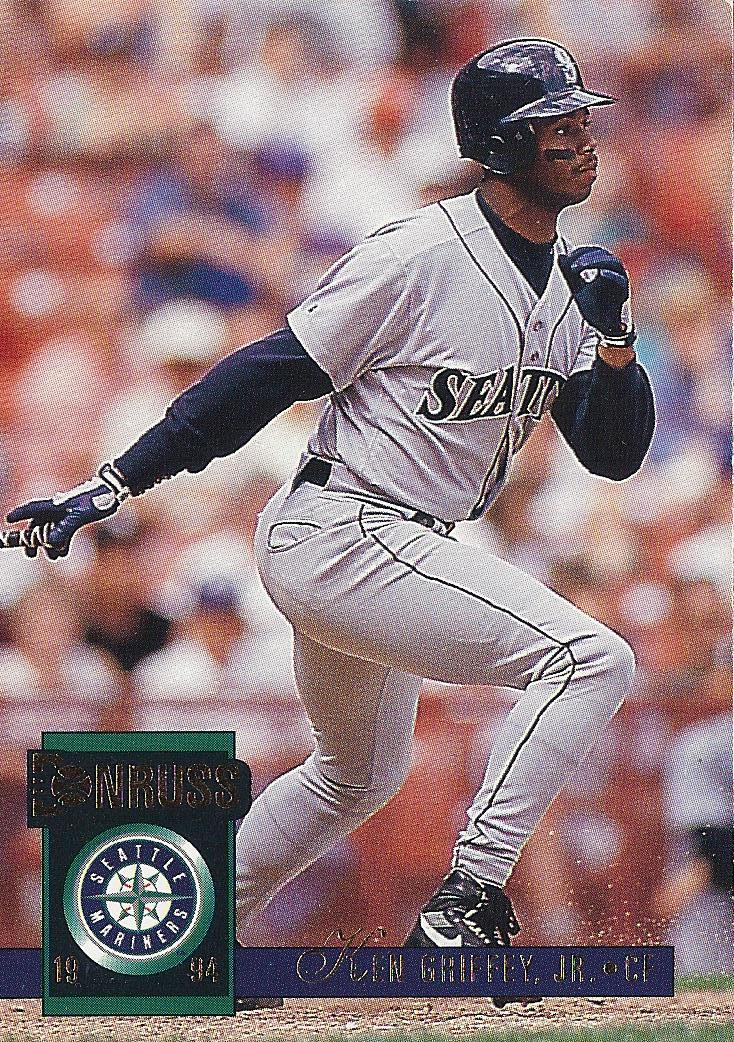 I want to know what happened at the offices of Donruss to spawn such a drastic redesign of the flagship set.  The ’94 base card is a beast.  Full-bleed but with substantial design elements filled with color and gold foil.  The interesting fonts and great holofoil-infused parallel make this another favorite Donruss design.  The bold, colorful new Diamond Kings also looked amazing. 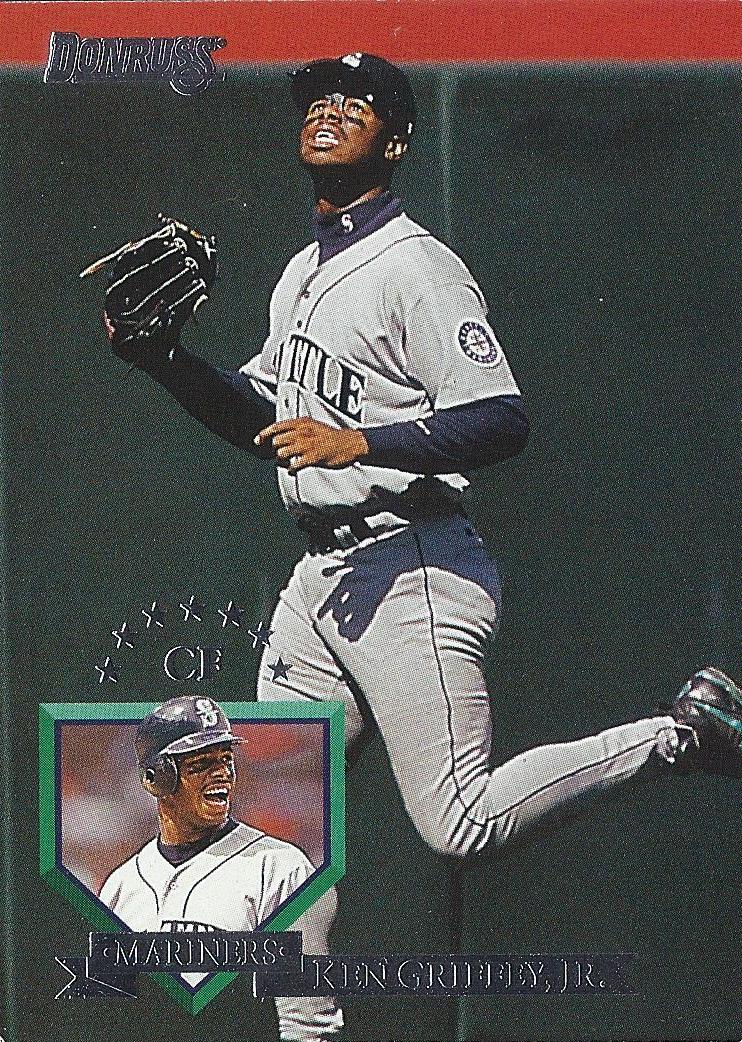 Touting one of my favorite back designs in the timeline, this one is just a slightly upgraded version of the previous year’s base card.  Here we get a silver banner beneath a portrait and my personal favorite redesign of the Donruss logo.  Sure, the name is a little harder to read in this set, but it’s the price you pay for awesome. 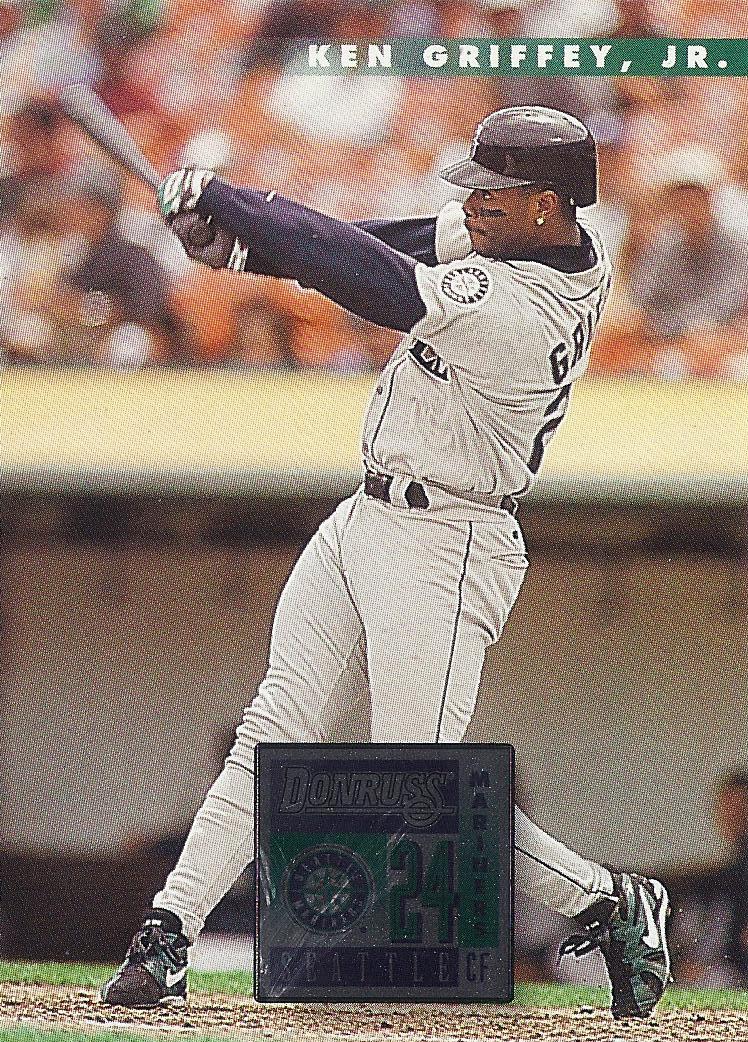 Their most modern design yet, here they really embraced the full-bleed with a shiny, centered Borg ship containing all the tidbits of information that belong on card fronts.  The name at the top of the card in a line of team-appropriate color is pretty low-impact visually, so the Borg ship is the dominant feature of the card.  The design here is modern and balanced, and it has grown on me.  Still, it comes off a little dry. 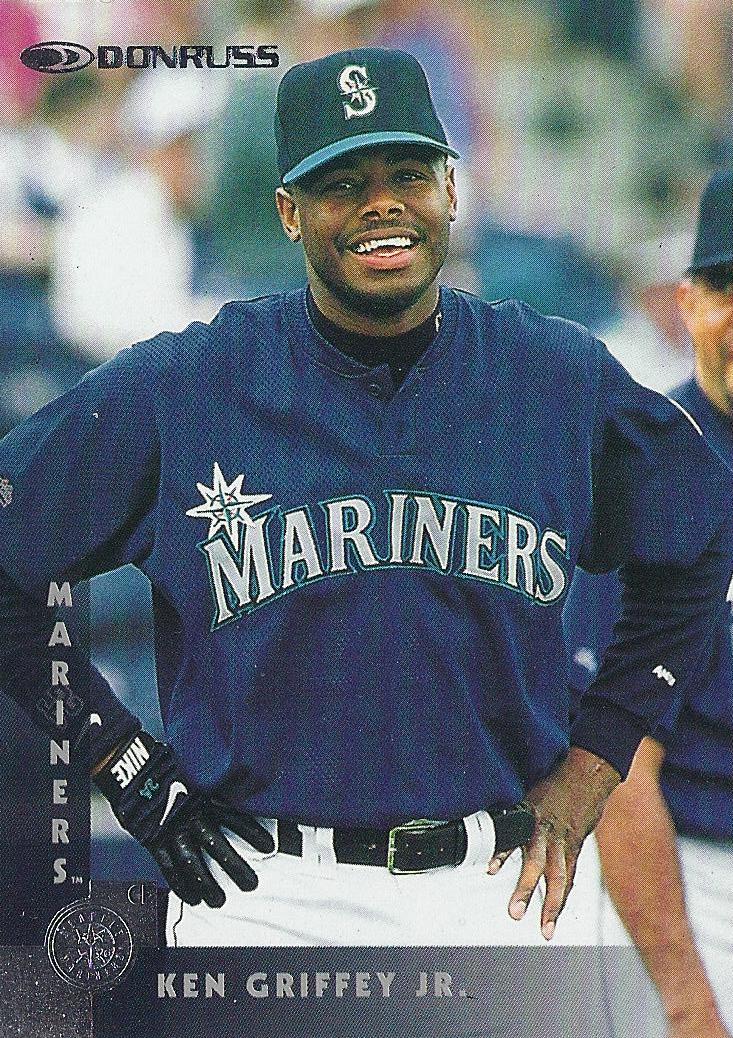 Same here - a nice, clean, modern design that bores me to tears.  Even the new logo is sterile.  Come on, guys.  Let’s bring back some of the gaudiness of ’94. 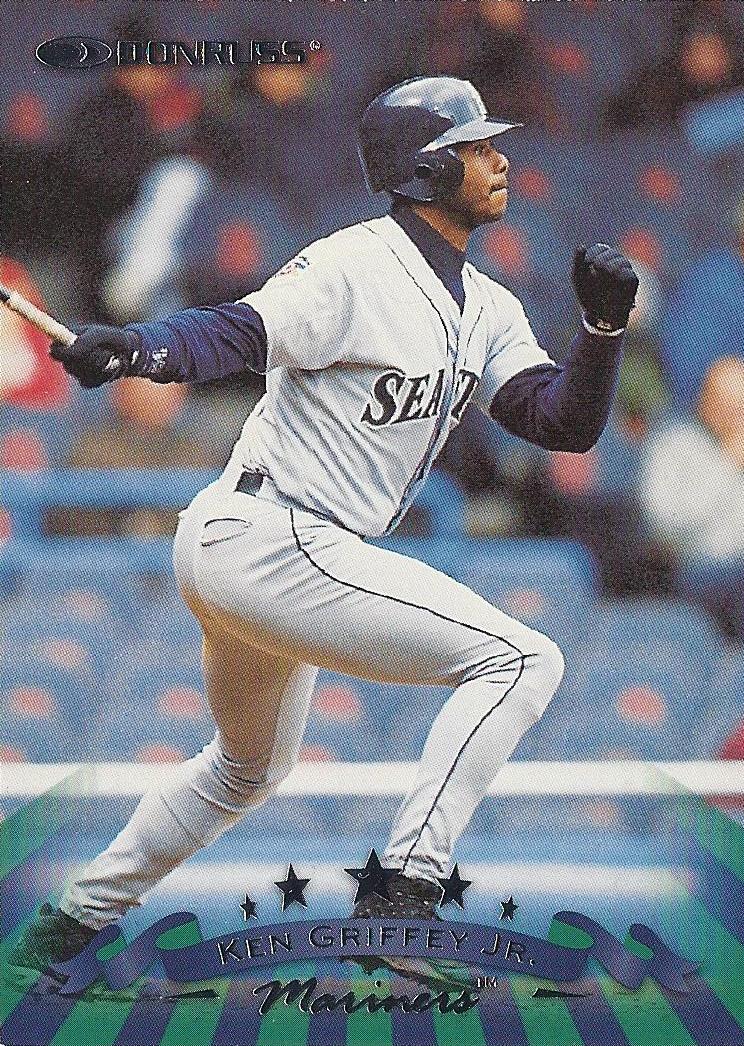 Yeah!  Lots of color, sweet banner, team name in script - this set is bright and fun and the parallels look great.  Is that team name in the same script as the 1990 set?  Are they making fun of us?

Sadly this is the last set Donruss would make before declaring bankruptcy and being bought out by Playoff, a mostly football card company.  For the next two years there would be no Donruss base set.  These 1999 and 2000 designs are actually inserts from their 2001 comeback set that showed what might have been.  For the sake of thoroughness, here are the 1999 and 2000 "throwback" sets: 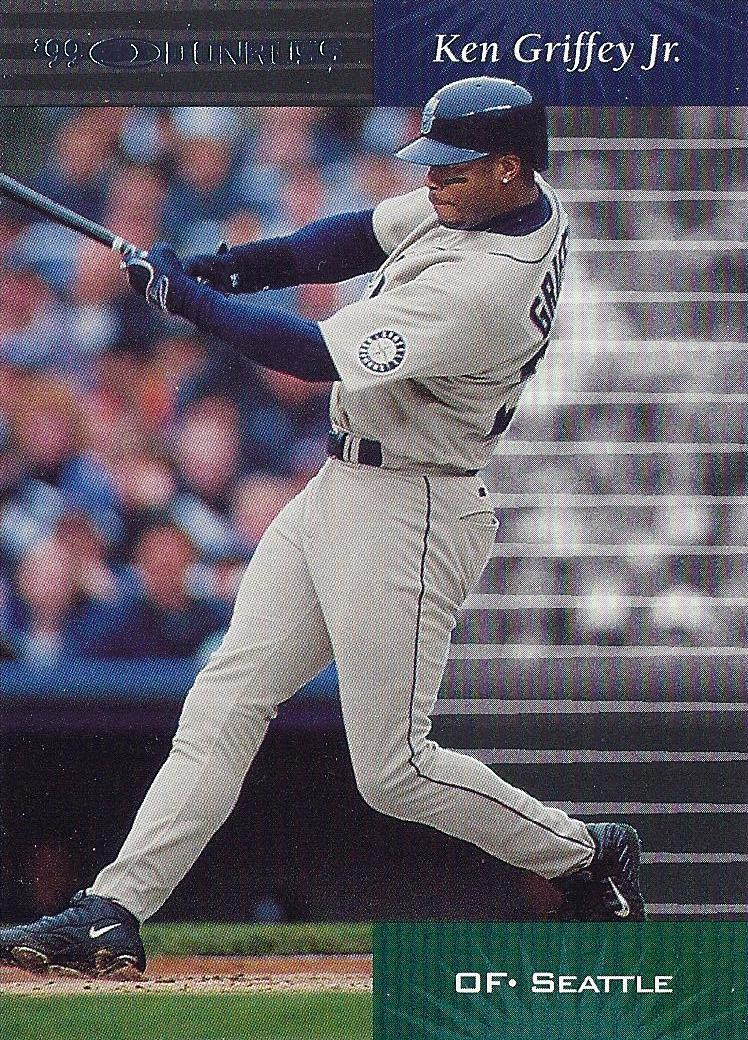 I wonder if this design was already completed and copyrighted when Donruss went under.  That would have added some authenticity to the set.  The design here reminds me of ’92 Score in that the elements divide the card in two.  The vertical lines streaming from the player’s body give the appearance of motion, but the card still feels a bit ho-hum.  Even the sweet blue foil (seriously - I dig it) can’t save it. This is a lot better.  I’m crazy about the border here - no restrictive black lines or solid colors.  Just a slight tint of team color that fills the bottom and fades its way to the top.  This is accentuated by a white fade from the top of the section inside the border.  The logo looks alright in gold foil, and I love it when brands include the year right on the front, a trend Donruss would continue right to the end.  Overall the design here is organic and a little fun. 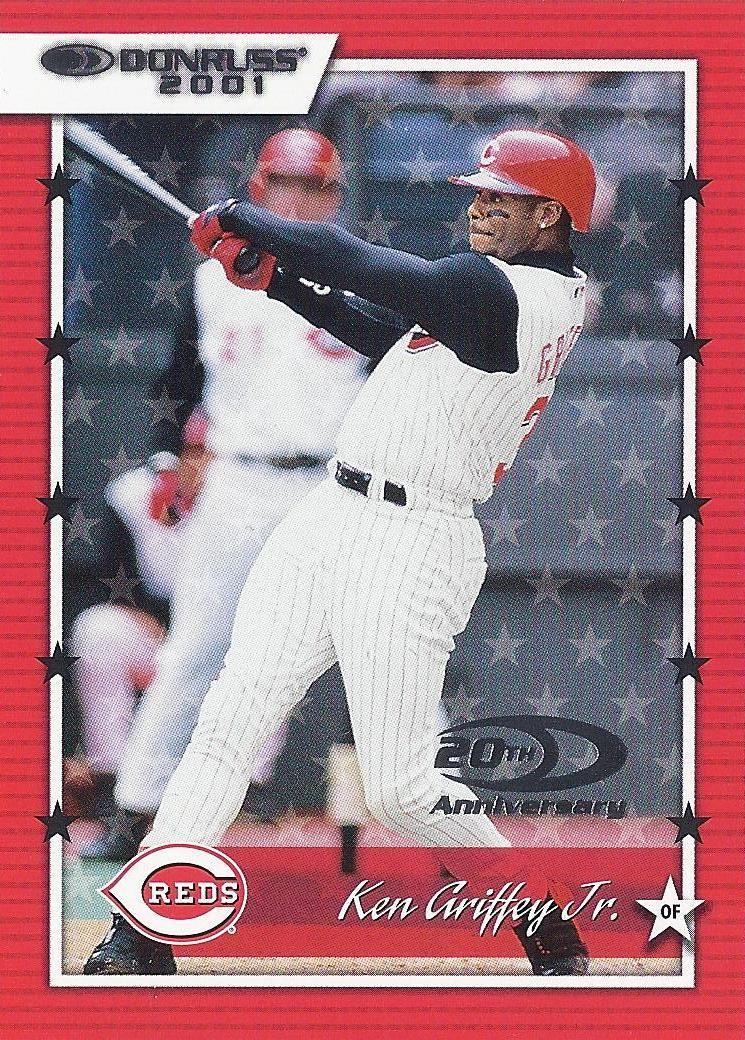 Back to honest-to-goodness base sets here, this design is riddled with God blessin' the USA.  At first I thought it was a result of the sudden, fierce patriotism of the post-9/11 world; but it turns out this set was released in May of that year.  That’s just Donruss loving America.  Isn’t that nice? 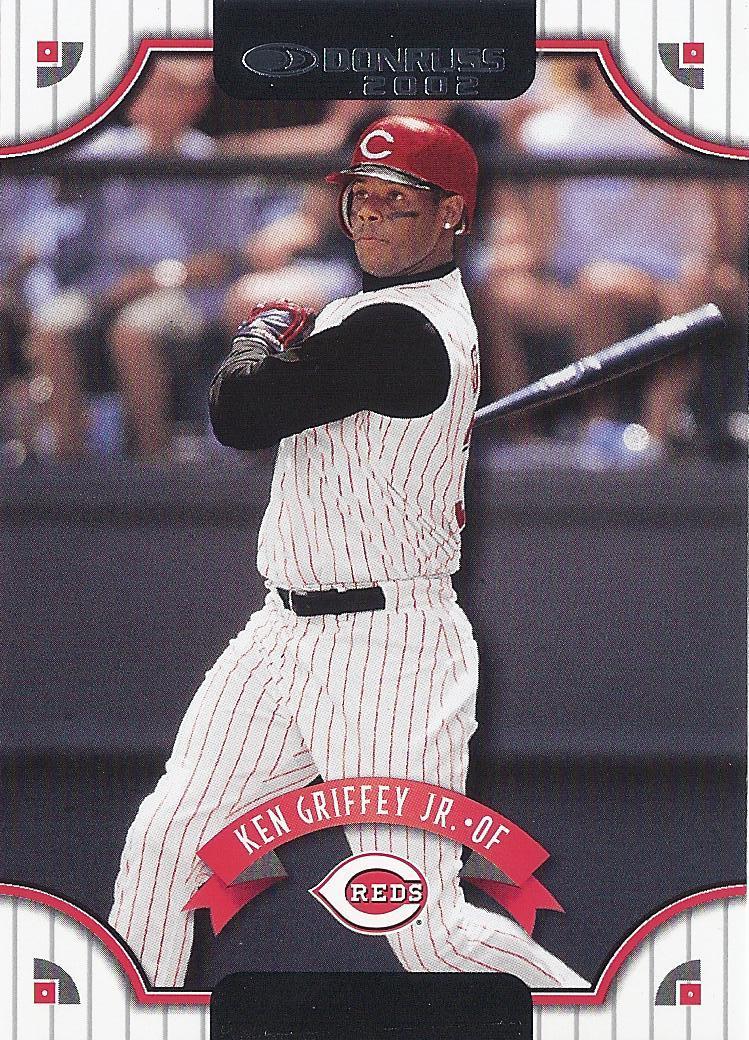 Behold the last half-decent base design under the Donruss name.  This one is loaded with great tidbits: team-appropriate color accents, little ball fields in the corners, banners, pinstripes, you know - baseball stuff. 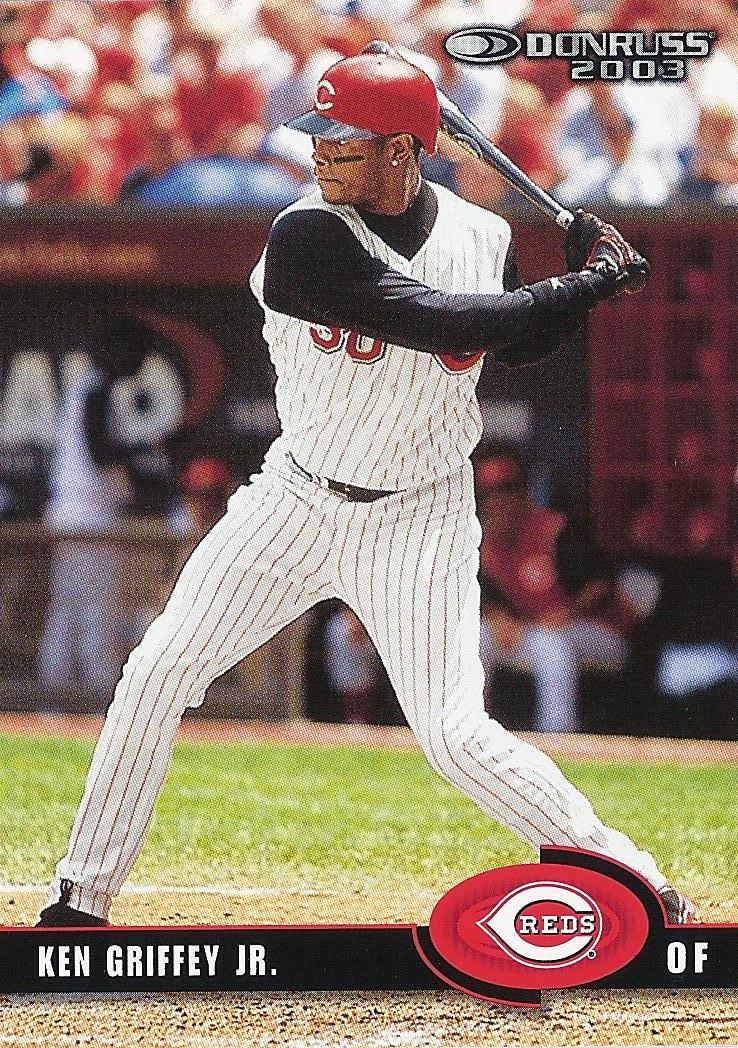 A very simple design featuring a run-of-the-mill shot of Griffey batting.  I haven’t seen that since EVERY DONRUSS SET OF THE 2000’s.  And with Donruss' sudden and flagrant recycling of images, you get even more of the same shots.  Let's mix it up some, guys.  He's a freakin' Gold Glove winner, you know. 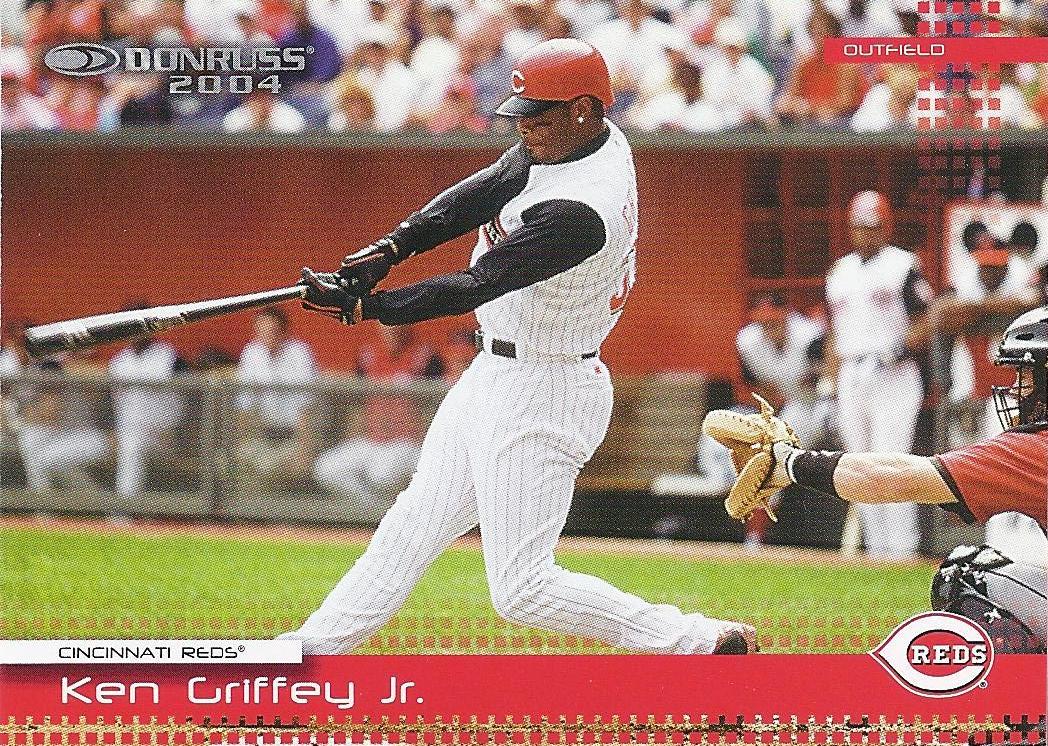 I mean, don’t get me wrong, not trying is way easier than trying, but there are things you can do to make the bottom-nameplate-plus-team-logo snoozer strategy of design more interesting.  Like foil.  Or anything.  Try anything! 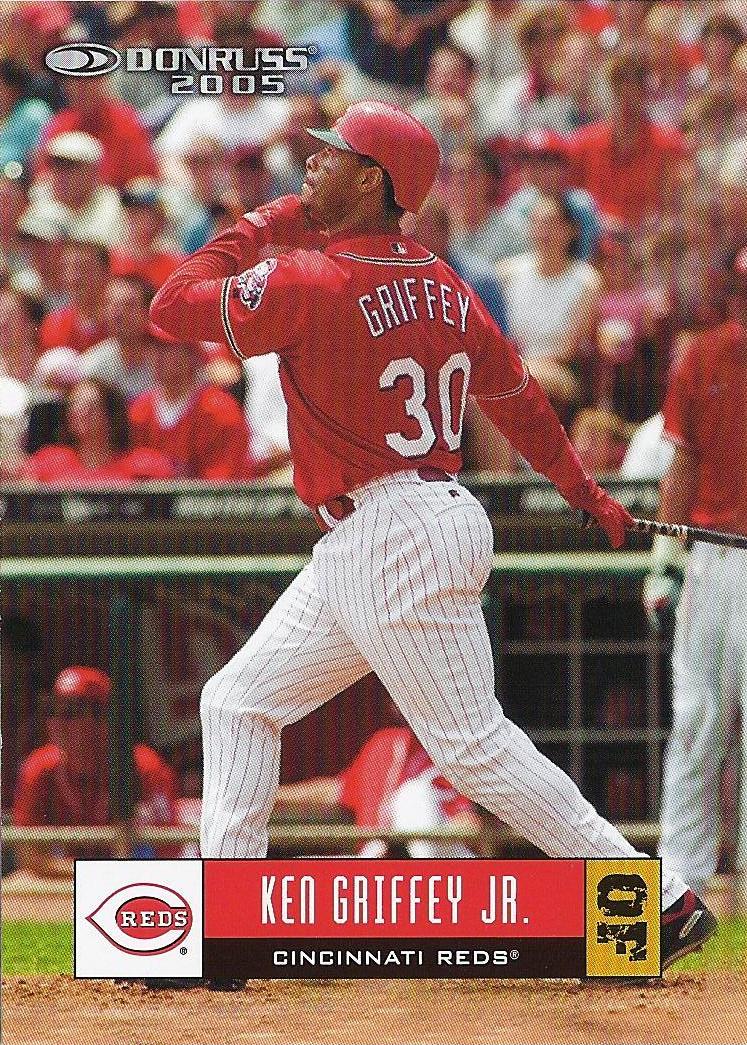 And what’s up with the simulated silver foil in the logo?  Could they not afford reflective foil?  There's whole brands whose base cards are made entirely out of foil, guys.  Slap some on that card!  I'm falling asleep here.

And that was the end of Donruss.  It looked like they still had a shot with the 2002 set, but after that it became more and more obvious that the end was near.  It took three years of sub-par base sets before the ol' girl was put to pasture.  Still a quicker ending than Lord of the Rings.

Fine, so I bad-mouthed one of my absolute favorite brands of all time.  After ’98 it wasn’t even them anymore, so I don’t feel too guilty.  I will admit that the font on the '04 set is pretty cool, but a font does not a base set save.  Oh, well.  A comeback this late in the game is pretty much out the window, but I'd still love a throwback set someday.

Ooh, I just figured it out - Donruss is the loveable misfit uncle who went away to rehab and came back not as fun.  Nailed it.

Here's every Donruss Griffey base card: 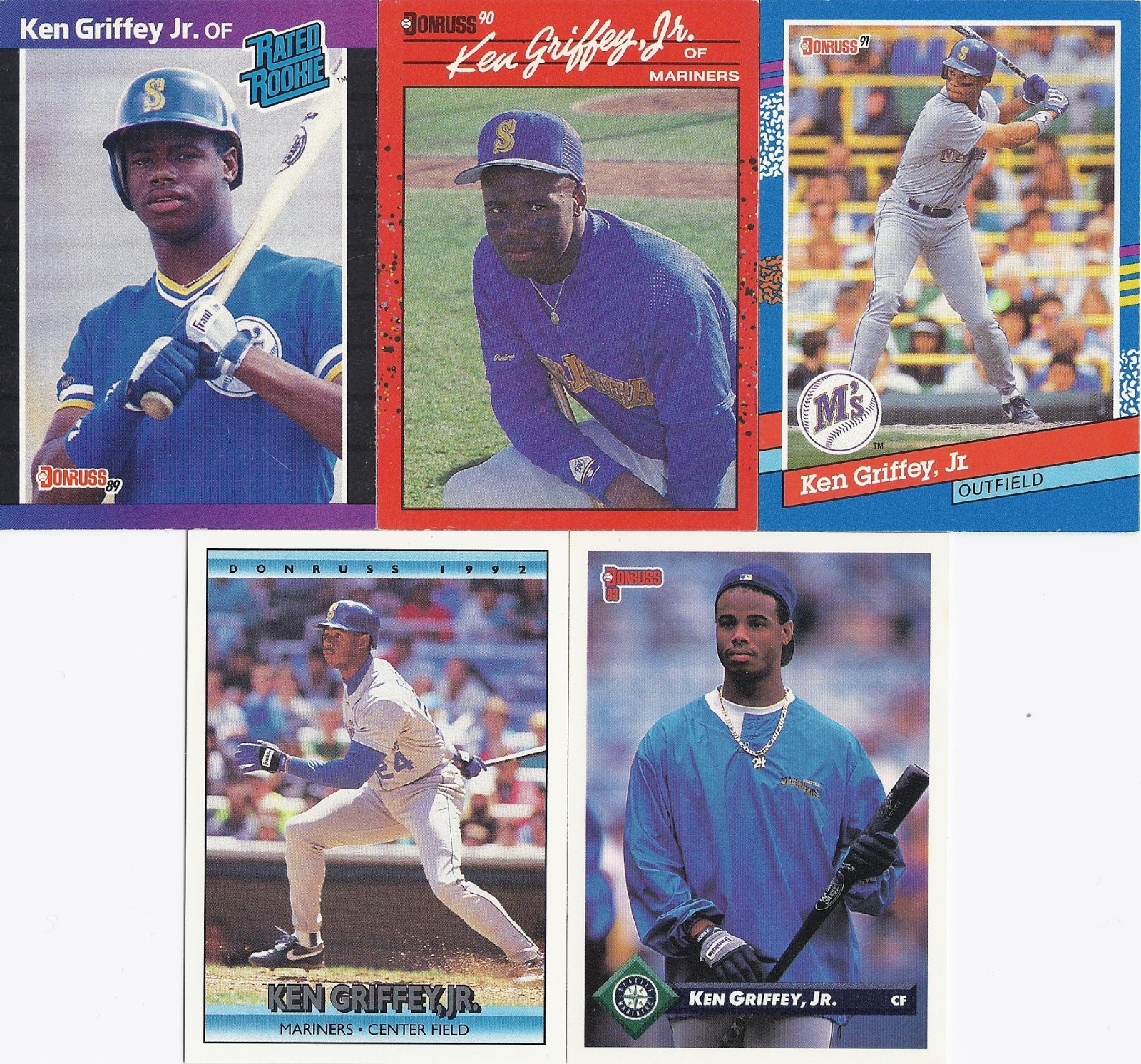 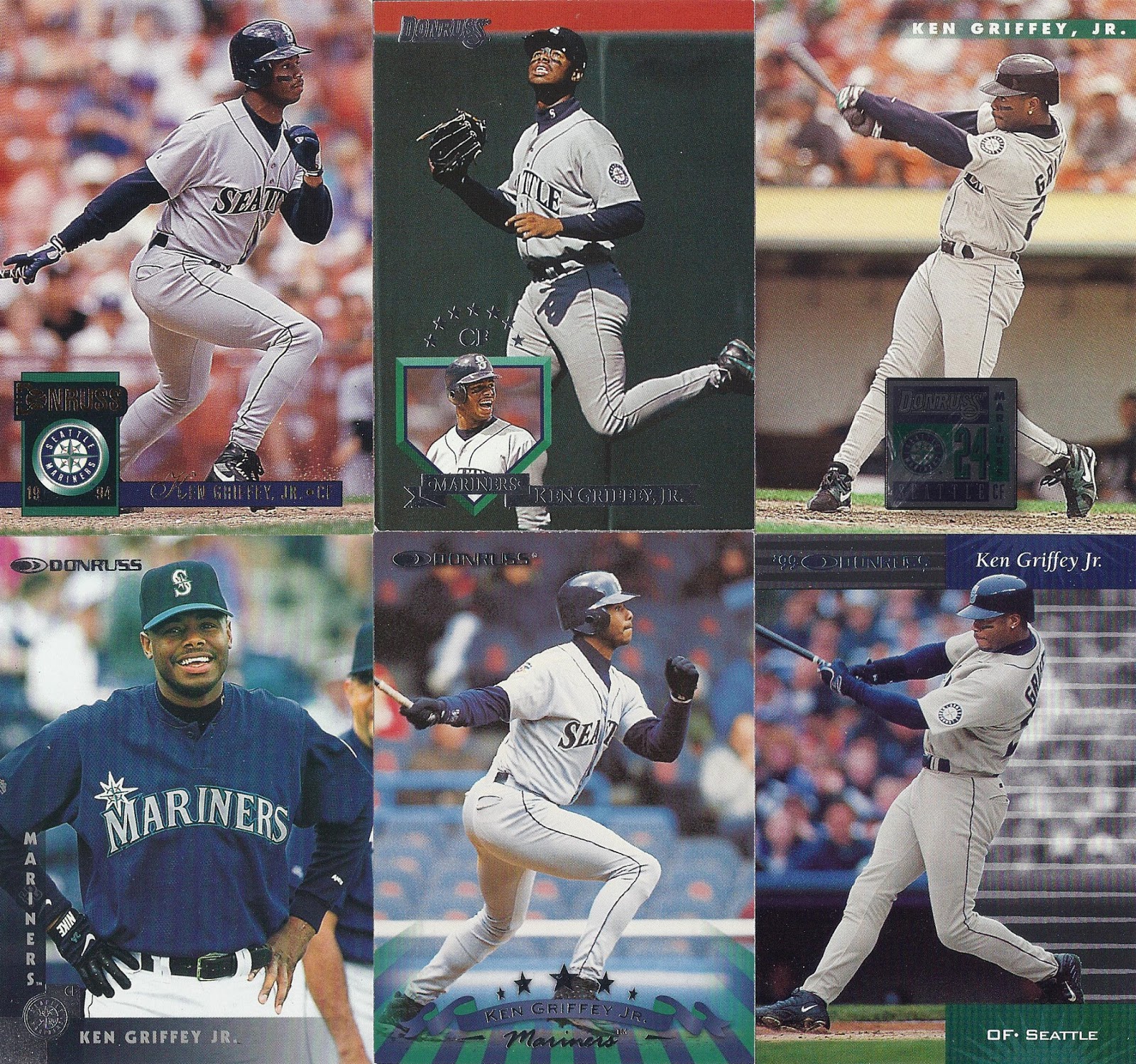 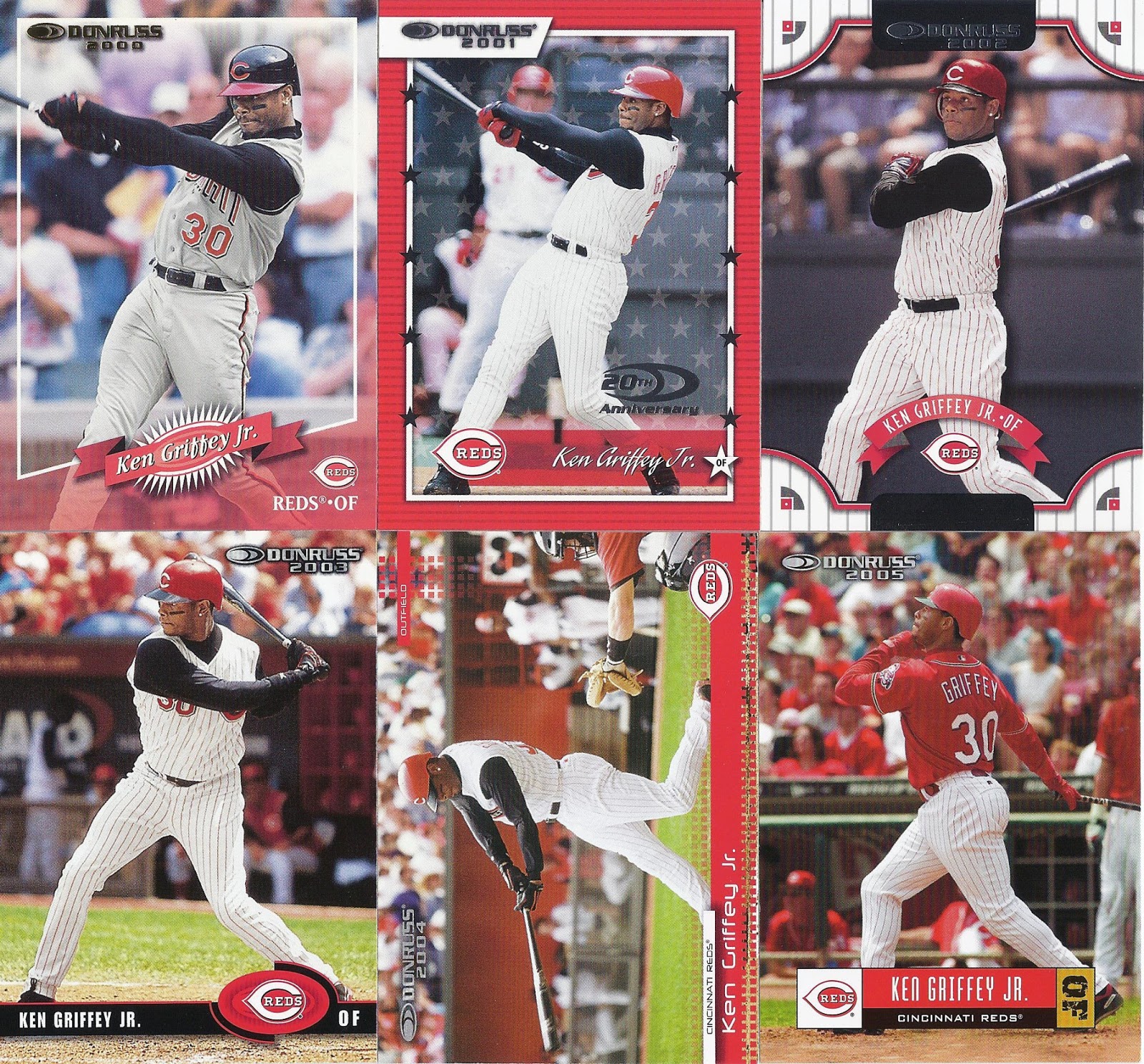