Organization Overhaul: How to Keep Track of 5000 Griffeys 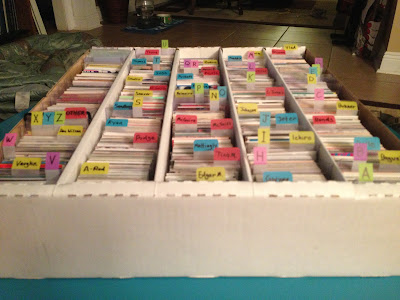 The organizational skill you need to pursue this hobby and not go insane is considerable.  When I have cardboard time to spare I spend about 85% of it organizing, 5% scanning, and 10% writing posts.  I’ve recently been undergoing a major organizational overhaul; hence I’ve been lax in my blogging and trading duties.  For that I am sorry.

But I’m really proud of the progress I’ve made in the organizational arena and how much better my collection as a whole looks in general, so I’ve decided to share my ideas on the subject.  For those of you who are interested in such things, I give you:

"If you become a hoarder, I'm divorcing you." - My wife

These are the principles that guided me in my creation of a more efficient system for amassing choice cardboard.

When this process began my collection was a virtual sharknado of piles and binders, boxes and unlabeled dividers.  You might think that just being a Griffey collector with a handful of PCs is stress-free and easy.  My early-onset male pattern baldness says otherwise.

Generally speaking, my collection can be divided into two parts: Griffeys and Other.  Each part has its own rules to obey and trends to follow - otherwise there would be chaos.

Let’s talk about the Griffeys first.

Binders work well for Griffeys as that part of my collection is not in flux - it only grows.  I can simply add new pages to binders as needed when I get new cards.  When I originally got it in my head to organize my Griffeys I bought three 100-count boxes of 9-pocket Ultra Pro Platinum pages and five 4” binders.  My plan was to group them by date and put them into binders by year and quantity owned.  This worked great until I started blogging and my collection tripled in size.  Suddenly I had stacks and stacks of unfiled Griffeys, and specific cards were a lot harder to locate.  I was overwhelmed.  A new system was needed.


First I emptied the existing Griffey binders, combined them with all the unsorted stacks I've acquired and split them up by year.  To hold them in the interrim I bought one of those giant, five-row card storage boxes and put all the Griffeys into it.

I took a ton of pictures because I was excited to have all my Griffeys in one place: 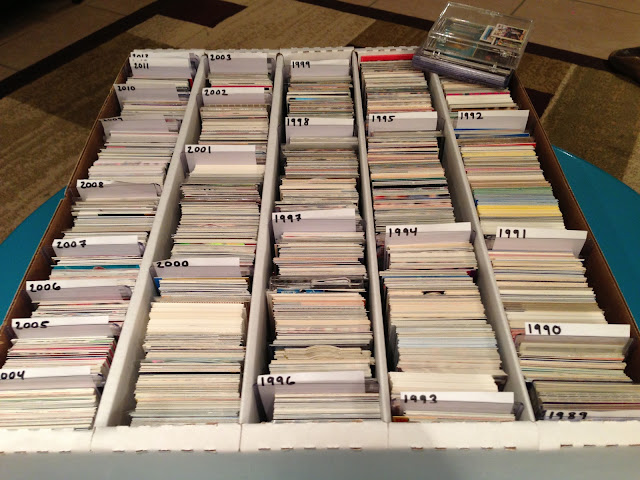 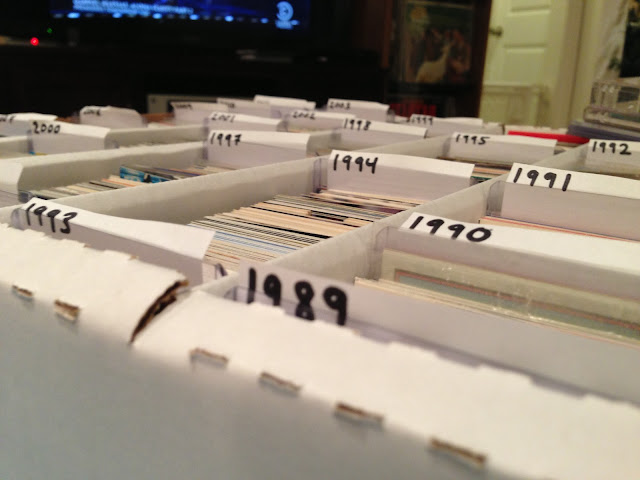 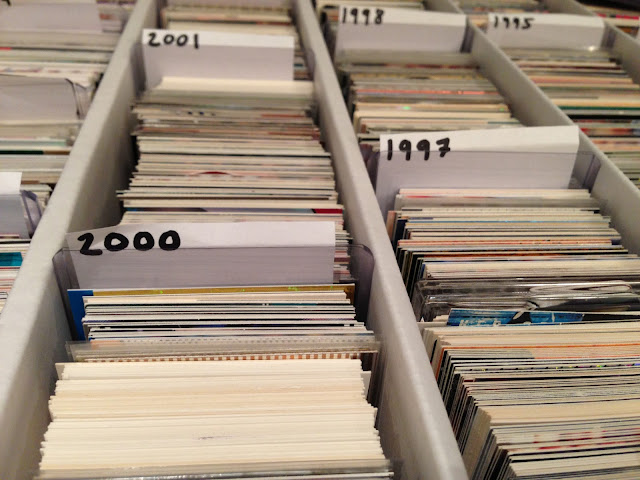 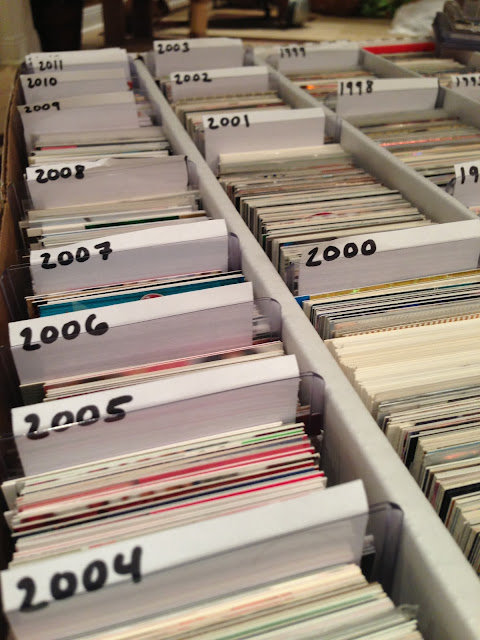 When I took those pictures I had forgotten about an entire long box completely full of even more unsorted Griffeys, so in that picture was only about 85% of my totaly Griffey hoard.  This box is supposed to hold 5000 cards.  Accounting for especially thick cards and penny sleeves, these pictures probably have closer to 4000 Griffeys in them.

In that box they stayed as I contemplated what to do next.

After a lot of thought, some money spent, and a weekend in front of the TV sorting and labeling, the new system is finally complete.  I kept the collection divided up by year, but also divided them up by brand and sub-brand to more easily facilitate both posts about individual sets and design timelines.  This way required that I have a lot of binder pages because there are going to be some empty pockets and the occasional half-filled page; so I bit the bullet and invested in four more boxes of Ultra Pro Platinum pages and dedicated two more binders to the cause.

I have finally completed this mammoth, weekend-long task:


That’s 6300 pockets filled at over 80% capacity.  Thus we have surpassed the 5000-card mark.  Here's hoping this costly new system works out.

UPDATE: I am writing this having subscribed to the new Griffey binder system for almost two weeks now, and I couldn't be happier.  I have learned that at my collection's current rate of growth, I'll most likely have to add another binder some time this year.  I'll write "Jr." on that one.  For now though, all is well on the Griffey front.


The organization of the Others has proven to be more of a challenge.


First of all, the idea of having every card I own in binders is out the window - it’s costly and far too impractical as that part of my collection is in constant flux.  I’m always acquiring old cards of dudes I like and new cards of new dudes who are just starting out and even non-baseball dudes.  I’m also constantly trading away cards to other bloggers or having to flip through heavy binders looking for a specific player which is a hassle with so many cards to deal with.  To sum it up, maintaining binders is out of the question.

I decided to ditch the binders and use the interrim Griffey storage box as my new permanent “Other” storage solution.  The bulk of this box will be all my keepers arranged alphabetically by player name.  I've attached filing tabs to top loaders to divide up letters, and wider tabs on smaller top loaders to mark players for whom I have a large quantity.  I’m toying with the idea of putting them all into penny sleeves.  We’ll see.

Here's how it turned out: 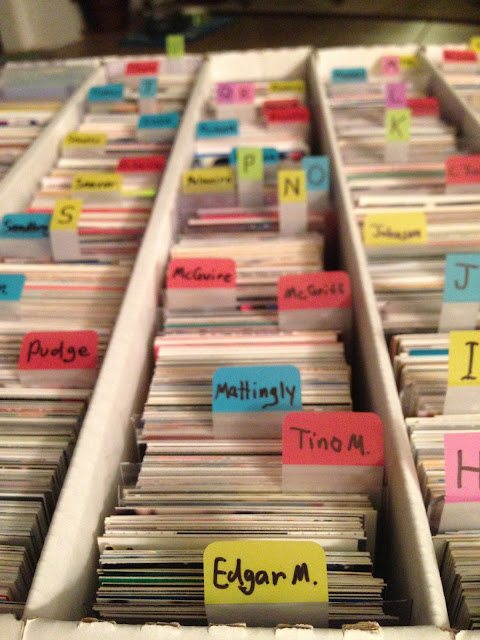 The great thing about the box system is that I can also put small card sets in there, themed and player collections can have their own slots, and the system can be changed around with ease.  The idea was to have my entire “Other” collection in there and in order in a single day.

When all is said and done, all that should remain in my collection will be the Griffey binders and the box of others.  Of course I’ll also have a few complete sets as well as some oversize Griffey items, but the loosely-sorted stacks on shelves and numerous long boxes containing God-knows-what will be a thing of the past.  Fingers crossed...

UPDATE: This part has proven to be a bigger job than I previously thought.  The Other box has filled up quickly, and I have deduced that it will not be my only storage solution when all is said and done.  My final goal remains a storage system that is simple, and I'm confident I'll get there.  There's just no way one box will get me there.  I'll have to make use of additional boxes to store small sets and large player collections.

I've also started pulling cards from the box that are too good to not be in a binder.  I'm thinking these will end up in a binder of their own just as soon as I can think of a cute name for said binder.

I snapped a few pictures of the physical state of my collection for your perusal.

- a printer paper carton completely filled to the point of being unliftable with even more unsorted cardboard I don't want, at least enough for two more of those boxes shown above
- two additional binders of non-baseball cards and uncollectables
- another plastic box full of trades set aside for specific bloggers

The perfect way to end this post is with a plea for somebody to take some of these cards off my hands.  You can see that I don't keep very much of what I get in terms of mystery boxes and repacks and such, so you know there's some good stuff in there.  If you have any interest in a box filled to the brim with cards exclusively from your favorite team and you have something to trade, message me.  I'm in.
Posted by The Junior Junkie at 11:06 AM

Email ThisBlogThis!Share to TwitterShare to FacebookShare to Pinterest
Labels: organization