1998 Donruss Crusade: One Card to Rule Them All

Have you ever heard of Donruss Crusade? Be honest.

I hadn’t until early 2014 when I stumbled across a message board of Griffey super collectors showing off their most saliva-worthy specimens, scanned blurry in their thick, screw-downs, driving all the readers crazy with their unfathomable scarcity. Even I was left reeling as I gazed upon scan after scan of ultra-rare Griffeys.

For Griffey collectors, this would be like showing pictures of Scarlett Johanssen to a man in prison for life with no possibility for parole. Or pouring a jug of water into desert sand just inches under the nose of a man dying from thirst. Sparkling, majestic, hopeless.

And the king of these is from 1998 Donruss Crusade. If you ever see someone with a Donruss Crusade card of their favorite player, you know instantly that this man is not to be trifled with. If the card he has happens to be the red parallel, just turn and run. That guy is out for blood.

Crusade is a perfectly-named, multi-brand insert released in 1998 and meted out to unsuspecting collectors via packs of Donruss flagship, Donruss Update, Leaf flagship, and Leaf Rookies & Stars. It was a “stealth” insert as Baseballcardpedia puts it, meaning anyone who pulled a Crusade card had no reference on the back of the pack for what it was they pulled or how rare it really was. The pack odds must have been astronomical, too, as there are only 375 copies of each card across three colored parallels, and the checklist was limited to only 130 players spread out among four brands.


There are three parallels to the set: green, purple, and red. These were numbered to 250, 100, and 25, respectively. The greens and purples sell pretty consistently in the triple figures when you can find them (which is a task and a half in itself). There is also a subset called “Call to Arms” for many players available in similar parallels.

But let’s talk about the Red for a moment.


The 1998 Donruss Crusade Red parallel is a true Holy Grail among Griffey cards. I feel like I’ve used these words before to describe other Griffeys, and now I regret that because I may have cheapened what is really the perfect description of what the Red Crusade means to even the most supreme of super collectors. I’ve seen five-figure offers. I’ve seen arguments (literally real arguments between adults, attacking each others’ characters and everything) about who wants the card more. There are supposed to be 25 of these puppies floating around; but from what I’ve seen, I suspect there are far fewer than that, and I’m not alone in that suspicion. This is the most intensely sought-after Griffey card I know - the Holy Grail, the light in Marcellus Wallace's briefcase, and the One Ring all at once and in Griffey card form. 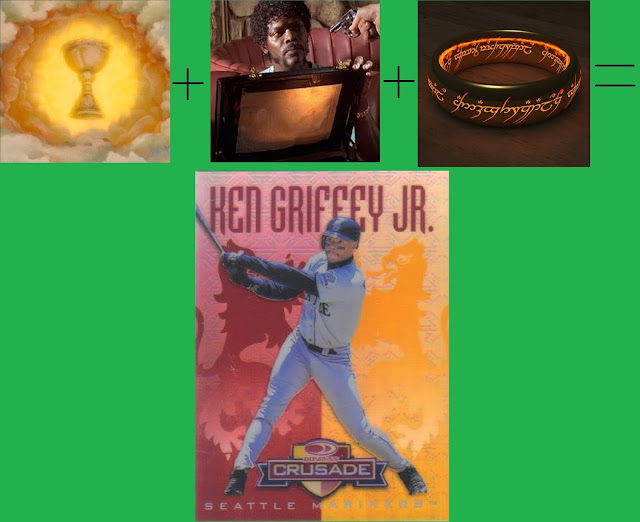 I feel a little uncomfortable even writing about it.


So how did it come to this? The real monkey wrench seems to have been the bankruptcy of Pinnacle, Donruss’ parent company. When that happened all the plans for Crusade were scrapped. It was meant to have continued for years and made its way into other sets in the same way the Elite Series insert did from 1992 through 1998 (and Upper Deck’s Piece of History 500 Home Run Club insert would beginning in 1999). There’s no telling whether all the specimens actually made it out into packs.

To make matters worse, after the bankruptcy an unknown number of sample, unreleased, and unnumbered Crusade cards made it out into the world, including a few of the never-officially-released Griffey Call to Arms subset. There’s no telling exactly what made it out the back door, but Baseballcardpedia has a list going of what cards have surfaced.


As for what I’ve seen, I know there is more than one green Griffey Call to Arms, but I’ve never seen the purple or red versions (though I’ve been assured they do exist in a private collection). As for the samples, I haven’t seen any of them. They are more than likely locked up in the vaults of silent super collectors or former Pinnacle brass. If any of the owners would be willing to share images of these cards anonymously, my e-mail address is at the top of this page.

So if you are a Griffey collector, securing your own Crusade card (or cards if you’ve got stupid mad skrilla and hookups like whoa) is a serious affair. It is your vision quest, your trial by fire, and your scene in Dune where Paul sticks his hand in that box. Will you feel the sting of the gom jabbar? Or will you see the truth of it? 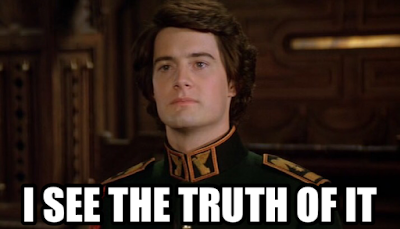 I did the latter. 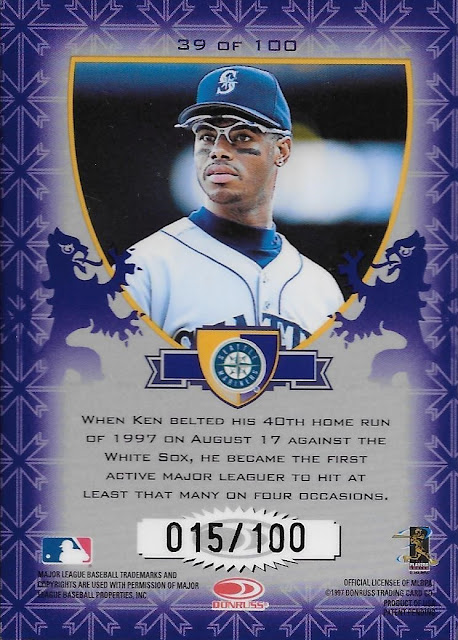 In December of 2015, I joined the Crusade Club. And I’m happy to report that of all the Crusade cards available, I got the one I wanted most: the purple and gold Griffey. I knew the first time I came upon an image of this card that I wanted to add it to the collection. It took me a while to understand just how harrowing a task it would be to land one, and when the opportunity finally presented itself, I pounced. A fellow collector e-mailed me when he saw one on eBay with a best offer option. A little back-and-forth and it was in the mail.

Yes, this is the type of card relative strangers e-mail each other about.

So what can I say about it? It’s chromium printed but flimsier than I was expecting, certainly thinner than Finest or Topps Chrome from the same period. The refraction is great and the designs embedded in the background catch the light beautifully. The color is exactly as bold as I expected which, being an LSU fan, is part of the reason I wanted this version of the card in the first place. I’m also happy to report that it scans well and looks like a big piece of candy in its shiny new screw case.

I’ve heard some folks complain about the picture on the card, saying it was of Junior popping out or fouling. I disagree. I recently fired up my VCR and watched an old Ken Griffey Jr. baseball tape I’ve owned for years wherein Griffey explains being able to hit the ball exactly where he wants in the field via extension. I think what we’re looking at here is a looper in the gap between second and third – a single at the very least. Maybe even a ribbie.

Oh, and the back? Flipped up shades, baby! It doesn’t get much better than that.

I spent two days with the card before taking some high-quality scans and locking it up in the safe deposit box. I didn’t compromise the scans at all, either. No case, no top loader, not even a penny sleeve. That’s card-on-glass – as faithful as I could get it.

Here are the Griffeys of 1998 Donruss Crusade that I still need (LOL):

I’d have been happy with a green, but the purple was my druthers. Beyond that I have no interest in chasing ungettables. And yet, do I want a red? Yeah, I suppose. Would I spend over $10,000 to get it? Not a chance. Honestly, my game plan is to break a box of ’98 Donruss and pull a red. I’m hoping I’ve got the karma to do it. 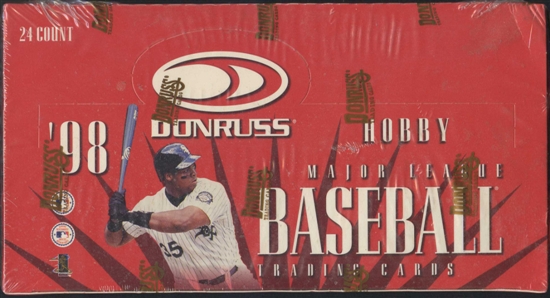 In the meantime a sealed box of ’98 Donruss is currently on its way to my door. Fingers crossed…
Posted by The Junior Junkie at 11:22 PM