Before we get to the bad news, let’s see home many of you are guilty of the same crime. Ready?

I get the vast majority of my blog reading and commenting done AT WORK.

There, I said it. If I’ve ever commented on your blog in the past several years, there’s a solid 90% chance that was done in my office on a work computer. That’s because I can multi-task. I can talk on the phone, service an account, and read about baseball cards all at the same time. I’ve become very good at squeezing a little Blogger into the down time between appointments, and it’s never been an issue before. 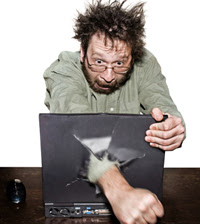 Blogger is now blocked on my work computer. I doubt it’s just because of me. I work for a large, international company that has already blocked pretty much every semblance of social media and personal e-mail there is. If it’s blocked on mine, it’s blocked on everybody’s. It was just a matter of time. I get it, too. I was responsible with it but could see how some may not have been.

I can still read some of your posts provided they are shown on my own blog’s sidebar (the Blogger site is blocked but I can still visit specific blogs). I can also see other blogs through your own site’s sidebars. No pictures, though - just post titles.

Whatever engine exists in a computer that allows one to comment on a blog post is no longer there. This means that I can read, but I cannot comment. It’s frustrating. Going forward, any commenting you see from me will have been done at home or on my phone (which I don’t normally do as I’m usually busy with e-mails, Sim City Buildit, or Rovercraft).


In summation: I’m not going anywhere, and I’ll still be reading as much as possible, but comments from me are going to be fewer and further between. Sorry, y’all.
Posted by The Junior Junkie at 8:00 AM