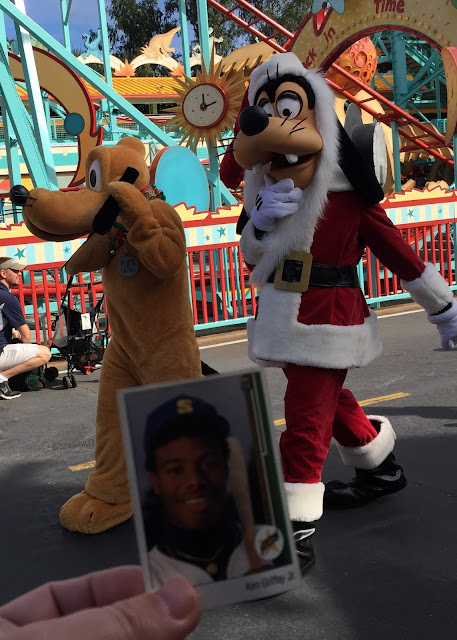 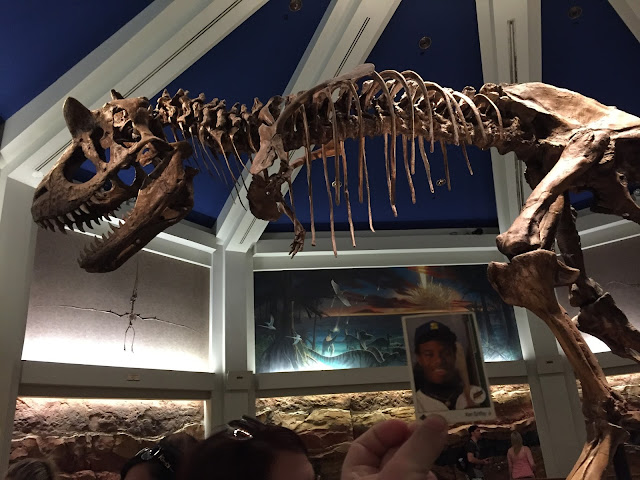 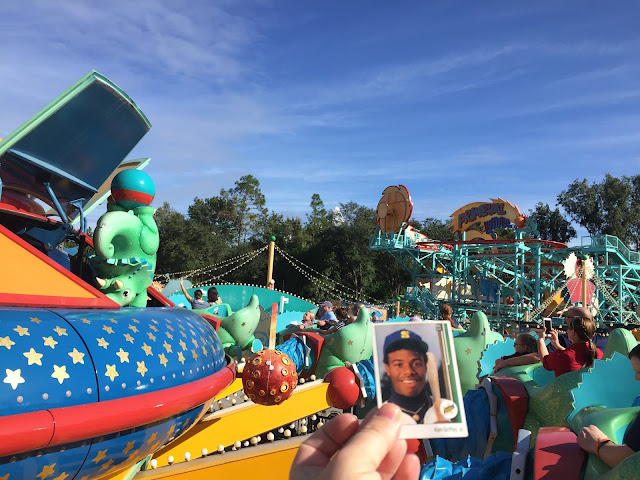 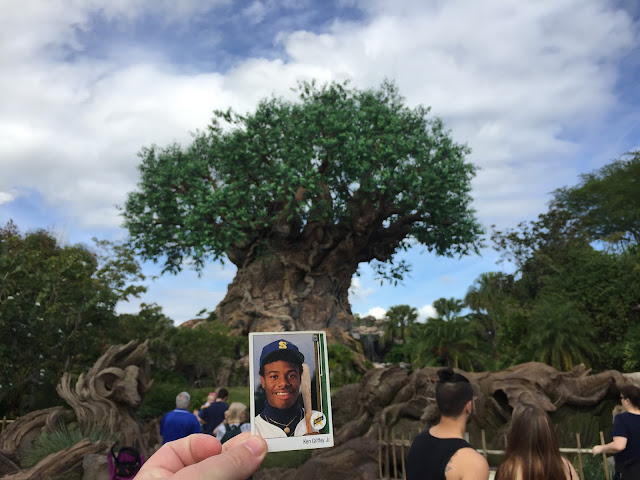 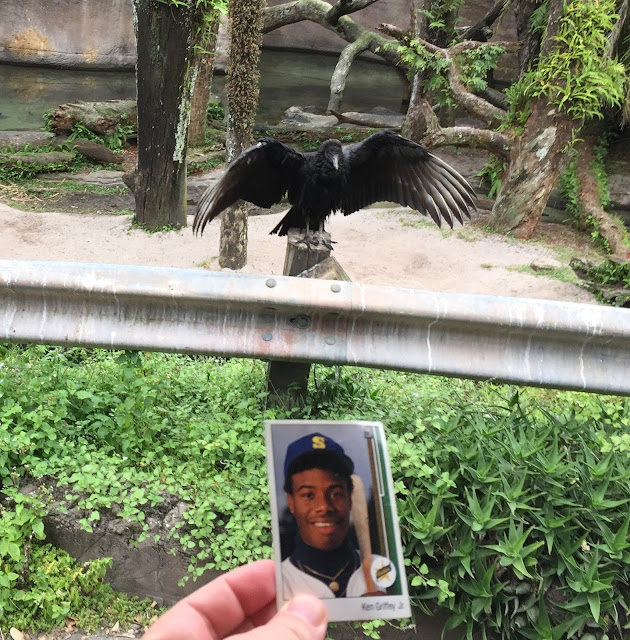 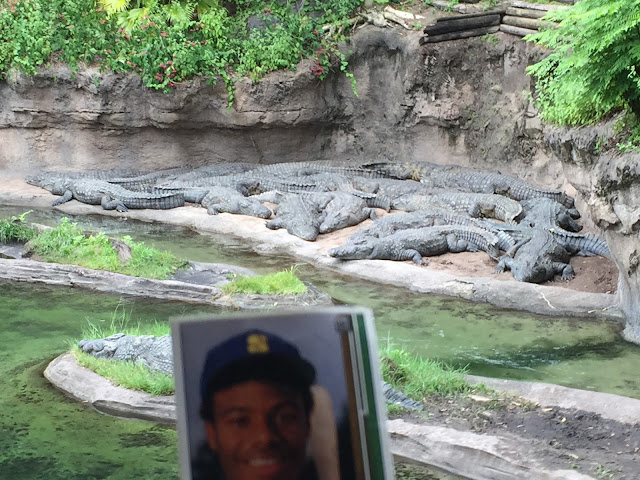 This is a lot of friggin' gators, and I live in Louisiana. 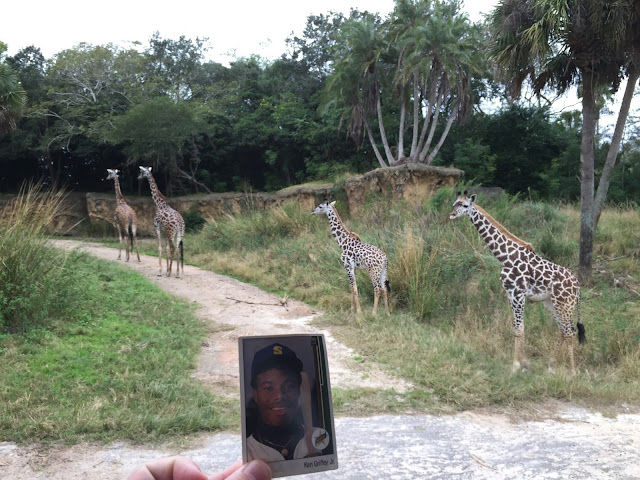 A group of giraffes is called a tower. Here's the first wallet carded tower of giraffes. 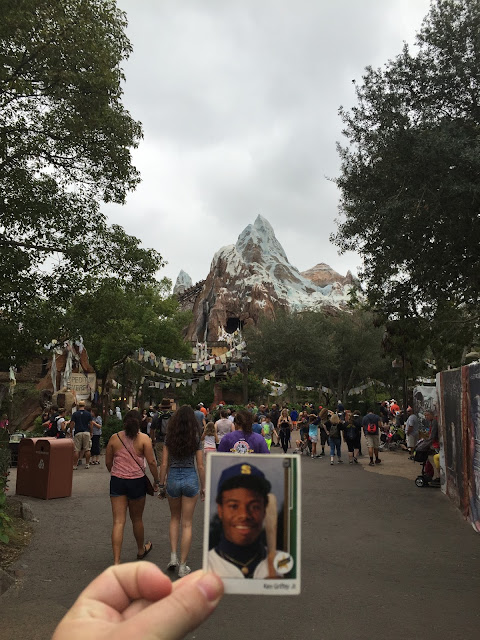 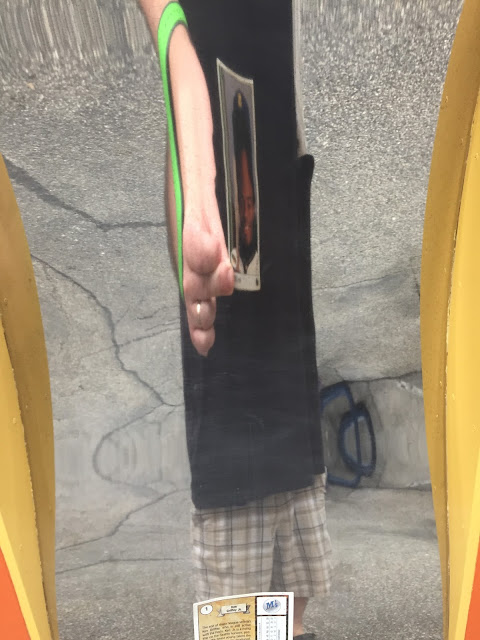 The Griffey in a crazy fun house mirror! 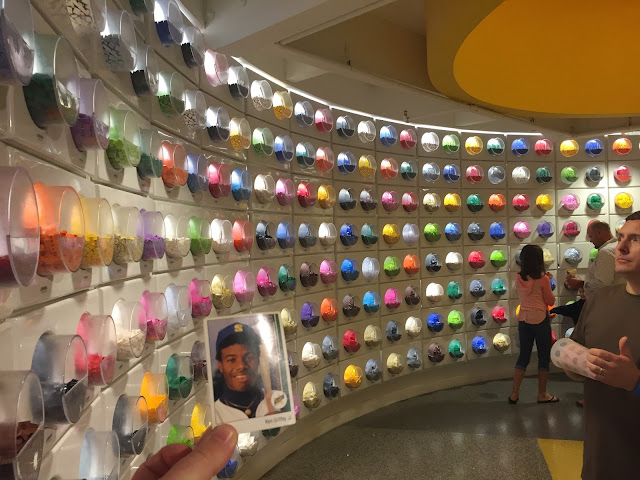 I've been to a lot of Lego Stores in my time (well, four, really), but the one at Disney Springs (formerly Downtown Disney) is far and away the best one. Better even than the one at Rockefeller Center or the one in the Toys R Us at Times Square. No comparison. Came home with some great stuff. 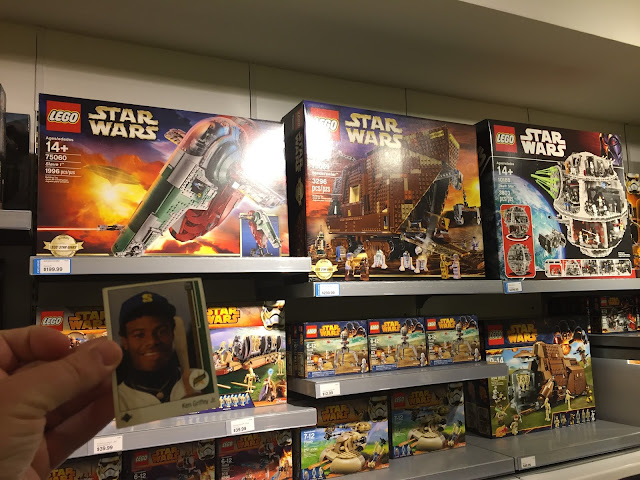 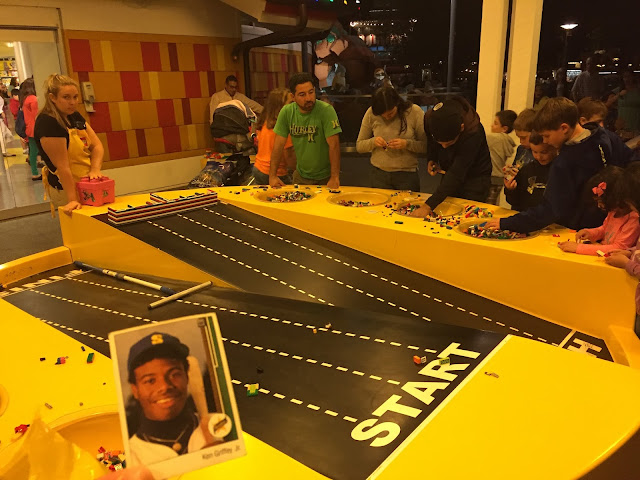 Out front you could build a car and race it. 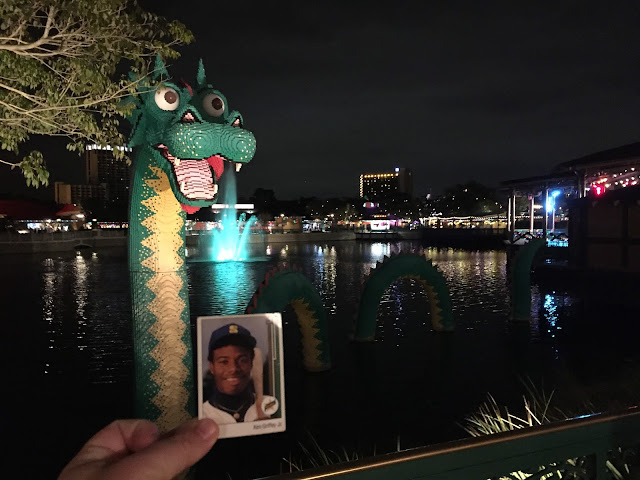 And there was also this massive Lego dragon chilling in the lagoon. 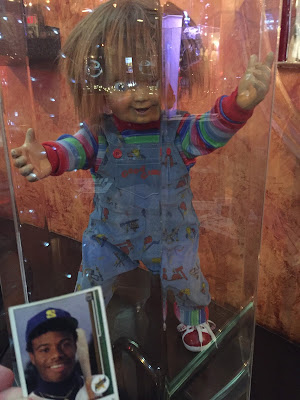 We ate at Planet Hollywood, so I got the opportunity to take some photos of the Griffey with a few bits of movie history including Chuckie here. 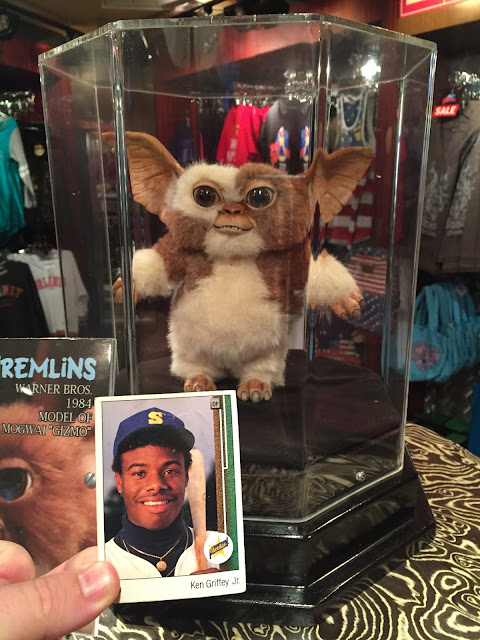 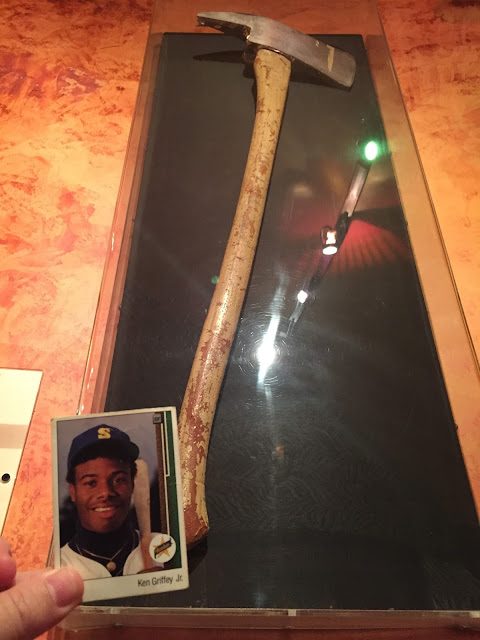 Of all the props we saw, this is the one that got to me the most - the ax from The Shining. I saw it from across the restaurant and thought, "Looks like the one from the Shining, but no....it can't be. The Shining ax belongs in the Smithsonian." You can ask my family - I literally said this out loud. Halfway through the meal my curiosity overtook me and I went to see what it was actually from, and yes - The Shining. This is one of my favorite movies of all time, so I was kind of upset for the rest of our meal that any Joe Schmo could douse his fries in ketchup just a few yards away from one of the world's great pieces of film history. Stanley Kubrick probably touched this ax, and Jack Nicholson definitely did. And I'm pretty certain that is Shelley Duval's kitchen knife. I was awestruck and sad at the same time, and I found myself seriously considering tearing it right off the wall and running like hell. 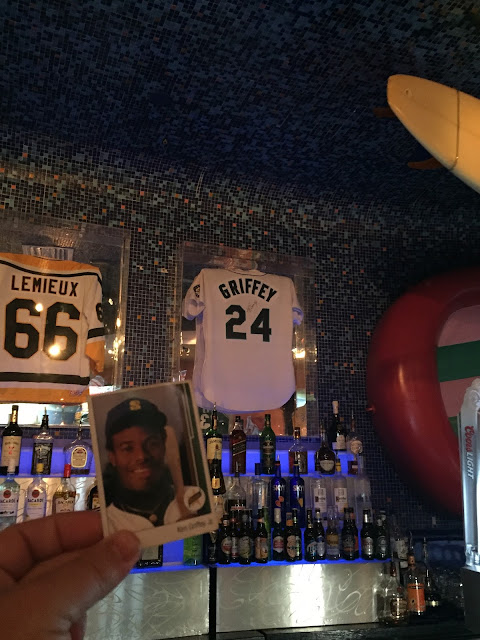 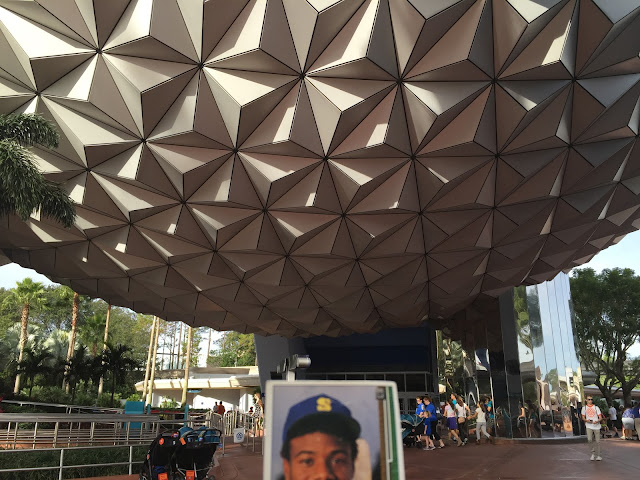 EPCOT is my favorite of the Disney parks. 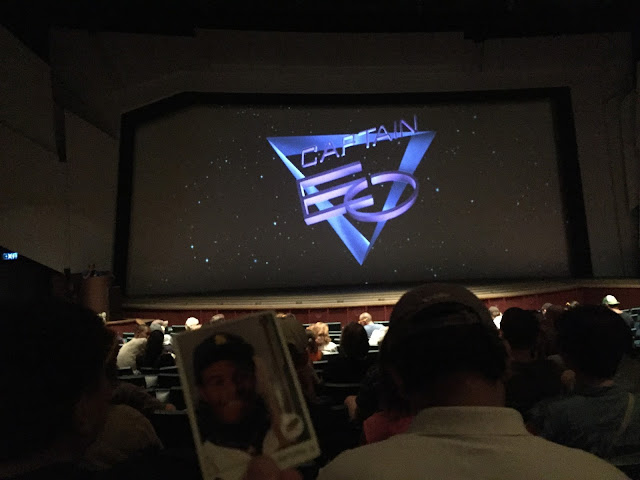 Captain EO is back, by the way - I didn't even know. It was a nice surprise. 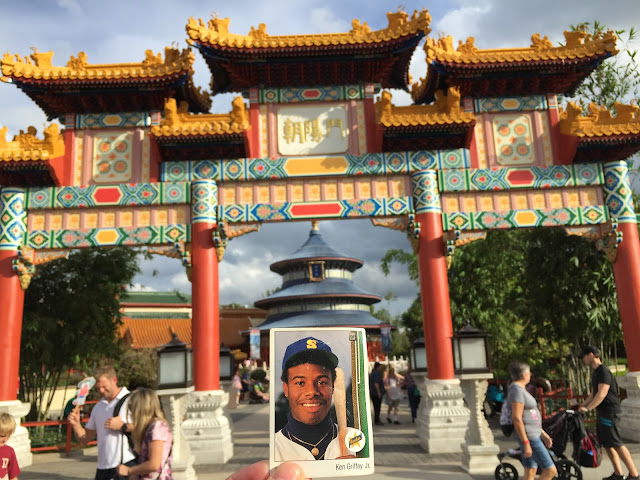 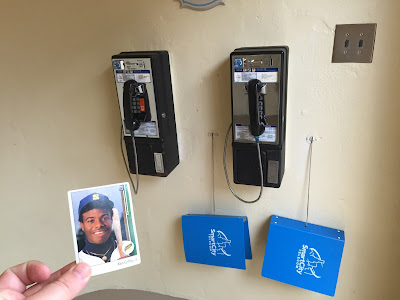 These were everywhere, collecting dust. 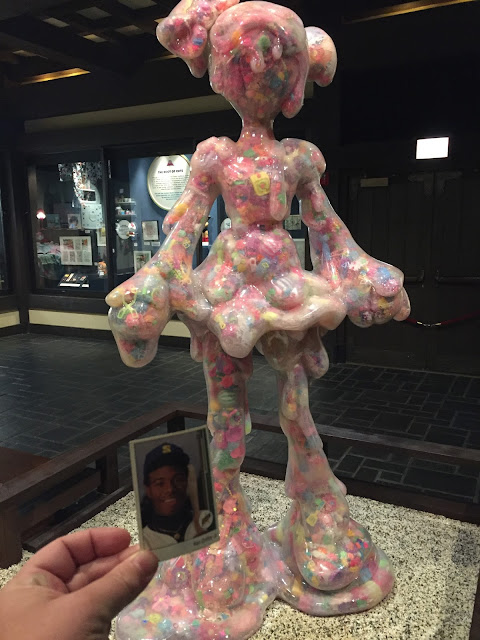 This is art from the Museum of Cute (Kawaii) in Japan. It was actually a really fun little place. 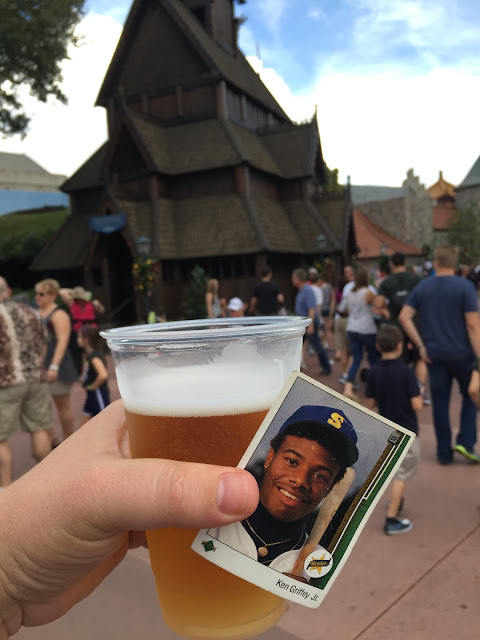 So let's talk about the famed "beers around the world" challenge wherein you drink one beer at each of the eleven countries showcased at EPCOT. I started it, and four countries in, I stopped. Why? long story short, I'm getting too old for this. All around us were obnoxious young adults who were obviously part-way through the challenge, acting all drunk and disorderly and making ridiculous scenes - I just didn't want to be one of them. Five years ago I would have gone full-bore and tore it up Junkie-style, but with twin 8-year old nieces and a pregnant wife in tow, I just couldn't justify it. I am lame now. 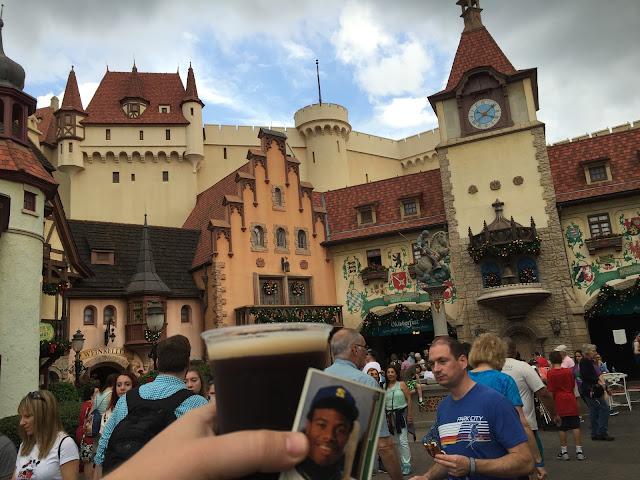 But I can also afford all the Legos I want, so here's to that. 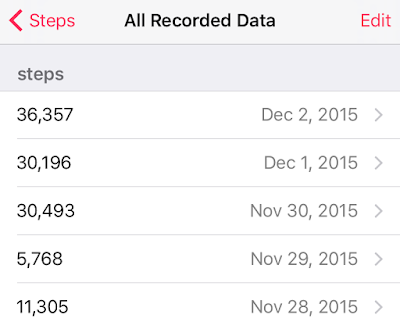 Fun side note: Monday November 30th was our first day at Disney, and Wednesday was our last day. Check out the iPhone pedometer - these were all records for me, especially Wednesday. That day was just ridiculous with the walking.

Coming next Wednesday: the last Wallet Card Wednesday post of 2015 from Universal Studios and Universal Islands of Adventure. Thanks for reading!
Posted by The Junior Junkie at 8:00 AM