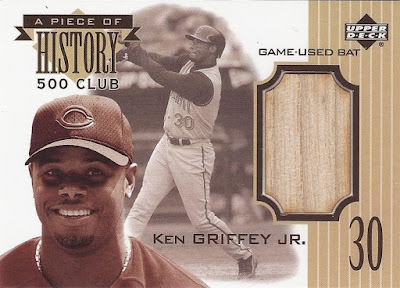 In 1999 the knuckleheads at Upper Deck destroyed a cracked baseball bat swung by Babe Ruth himself. It was big news at the time. People were pissed – collectors, baseball fans, even people who had never bought a baseball card were like, “Dude, WTF?”

I’ve forgiven them – I’m a big fan of said knuckleheads. They gave a lot of people who would otherwise never get to own a Ruth bat the opportunity to own a piece of one for much cheaper, and possibly for just the price of a pack. That’s arguably better than the full bat (which was cracked anyway) collecting dust on a shelf somewhere in a private collection.

Not to mention the fact that we got one of the coolest, most original inserts of all time out of it.

There are a lot of ins and outs to this set as you can see on the Baseballcardpedia page, but I will try and hit all the important points, particularly the stuff about the Griffey.

Upper Deck A Piece of History 500 HR Club is a multi-brand, multi-year, ongoing (well, it was) relic insert with releases starting in 1999 all the way through 2010. The idea was that as players entered the 500 Home Run Club, they would be issued a card in this insert. Their card would then be seeded into packs of the next Upper Deck release. For example, Junior entered the 500 HR Club on June 20th, 2004. His card was released in Upper Deck Etchings later the same year.

Barry Bonds was not included as he was a Topps guy. Oh, no complaints about that? Very well, let’s move on…

Based on what figures were released about the Babe Ruth cards, it is widely believed that all cards in this insert were limited to 350 copies each and seeded at 1:15,000 packs or thereabouts. There is also an autographed (or cut signature) version of each player’s card numbered to his respective uniform number; however, Griffey’s is numbered to 25 for some reason. The autographed versions stopped after 2004.

I lucked into one for a reasonable price earlier in the year, and here it is:


Every card in the set looks more or less exactly like this. They were all done in sepia, giving them a timeless quality with no clashing team colors. Also, the bat relic itself is not only slightly larger than most relics of its kind, it is also cut into a unique shape with curved corners and framed. All the cards are horizontally-oriented with an action photo and a large portrait. The uniform number is featured prominently in the bottom-right corner.

Relic cards are a dime a dozen nowadays, but there are a few relic designs that stand out as the greatest ever made. This set is most definitely on the short list. 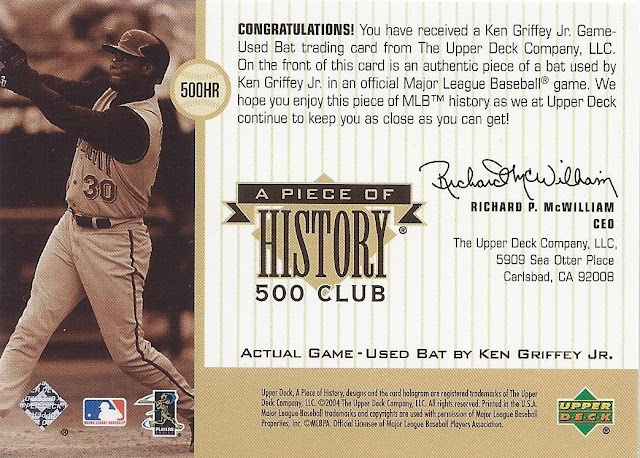 We don’t have exact figures on how many of these were made for each player, but as I said there are believed to be around 350. The prices these Griffeys command are extremely high given the fact that at heart this is just a simple bat relic card. The bat chip is not even from the bat Junior used to hit #500 (THAT would have been something). It’s really the uniqueness of the insert itself and its checklist of history’s greatest sluggers that gives this card its value. Plus you've got both player collectors and set builders chasing a very limited number of cards that just don’t seem to come up for sale very often. Expect to spend several hundred dollars to land it if you can find one.

The checklist is great, too. The only complaint some folks may have is that the cards don't necessarily show the players on their heritage team but the one they were with when they slapped #500. Frank Thomas' card has him as a Blue Jay. No offense to our neighbors from the North, but that still weirds me out.

Thanks for reading!
Posted by The Junior Junkie at 8:00 AM