1990 Sportflics: Lenticular Technology at its Okay-est 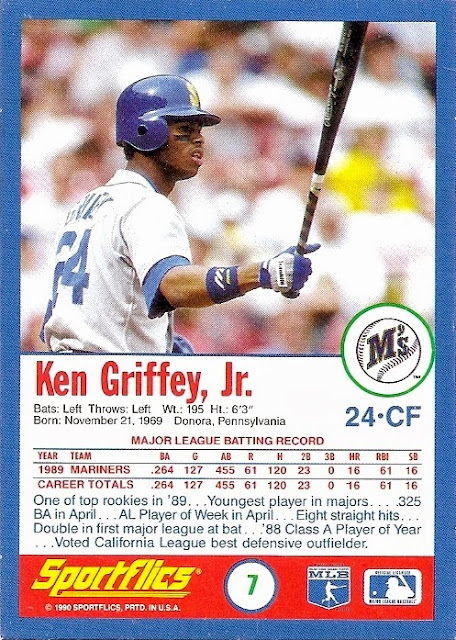 
Is this a good Griffey card?  Yes.  The first use of lenticular technology on a Junior card.


Sportflics first came out back in 1986, but it wasn’t until 1990 that the set was graced with a Griffey card.  There’s not much to the design: a blue box for a name plate, little orange and yellow lines that seem to slide around the border, and an alternating team/position below the name.


After this set, Sportflics would take a three-year hiatus only to return in 1994 under Pinnacle as Sportflix 2000, a more well-rounded and modernized brand.  Unbeknownst to them, lenticular technology was not about to catch on, but just in case it did, a lenticular mini-explosion was ignited by card makers.  Two come to mind: Pinnacle marketed a second lenticular 3D product called UC3 the following year, and so did Topps who came out with Dimension III (D3).  Both were a’ight, but even as a kid it was clear that this would be a passing fad.


And did I mention that these cards are the scourge of card bloggers because they can’t be scanned effectively?  I tried to get a scan of both front images, but kept ending up with an unaturally multi-limbed amalgam.  Here it is:


The card depicts the bottom half of Junior’s trademark swing in two parts.  It’s blurry, too, as lenticular cards have always been pretty imprecise.  Image quality is sacrificed for the multi-view effect, and the result tends to be meh.


Lenticular printing would eventually improve but not by much.  Its limited return in the mid-90’s would mark the end of its use as a base set concept.  Good riddance to silly Happy Meal technology.
Posted by The Junior Junkie at 12:08 AM